A Juneau and Janet Secret

My doggles like to sleep in.  I get up a little bit earlier than Jer does every workday, so they try to stay in bed as long as they can, until he kicks them out.  I go through my usual morning routine, with little to no interest from the doggles.  One day, Juneau apparently didn't feel like sleeping any longer, so she followed me into the kitchen as I got my cereal.  I poured my Cheerios into a bowl, and a few of them escaped and landed on the floor.  Juneau gobbled them up and I thought nothing of it.  The next day, I went into the kitchen and grabbed the cereal box, as usual.  The distinctive noise of cereal being poured occurred, and much to my surprise - Juneau came running into the kitchen from the bedroom, looking to see if I had spilled any.  I thought it was pretty cute, so I purposely let a few hit the floor.  What's the result of that?  You guessed it - every morning since, when I walk into the kitchen and grab the cereal box, Juneau comes running in behind me.  Now I just grab a handful and set it on the floor for her.  The other doggles have no idea it's going on.  Believe me - if Riley knew there was food being distributed, he would be there in a second.  I love this little secret between Juneau and I. 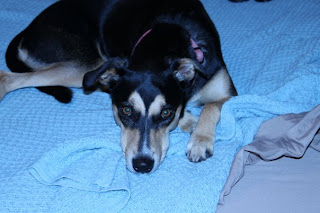