On our first sightseeing day in Germany, Kim, Karin, Jeremiah, and I took a train into Koln.  As soon as we exited the train station, we could see the amazing cathedral that Koln is famous for.  You have to tilt your head back pretty far to see the whole thing!  It's humbling.  We went inside and discovered that it was just as impressive on the interior as it was from the exterior.  We took a lot of pictures, but decided to come back later since there was a mass in session! 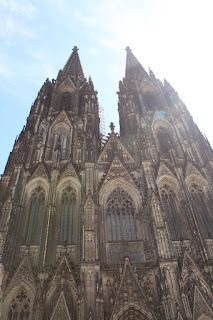 My camera couldn't handle it!
After leaving the cathedral, we walked around the city and headed towards the Rhine River.  Kim showed us a bridge where lovers attach locks and throw the key into the river, signifying their enduring love.  What a neat idea! 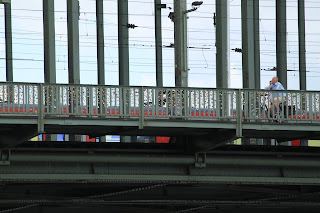 Look closely and see the "love locks"
Next, we took a boat tour down the Rhine and saw a lot of interesting sights.  The newest landmarks in Cologne, the "crane houses" are quite a spectacle.  We also noticed a young couple, sitting on a couch, in a precarious location.  Take a look... 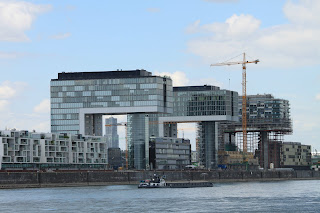 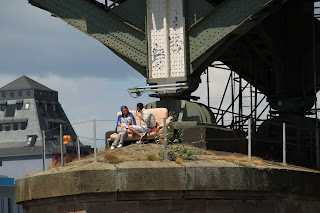 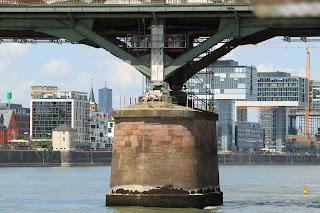 In an unusual location!
The boat tour was really enjoyable, and we got a neat perspective of the city.  By then it was lunchtime, so we stopped off for a flammkuchen.  It looks like a pizza, and is made of dough topped with sour cream, onions, and ham.  Next on the agenda was the Schokoladen Museum, or chocolate museum.  Jer was just a tad bit excited since he's a chocolate junkie.  The museum gives you an overview of the entire process surrounding chocolate preparation, from the cultivation of the cocoa beans to the packaging of the finished product.  We were in a room that showcased some really old tools, and Kim and I went over and started messing with an antique scale used to weigh sacks of cocoa beans.  It was in the middle of the room, with no rope or glass or anything around it, so we assumed it was fair game.  After our activity made a few clanking sounds and attracted the attention of a museum staff member, we realized we probably shouldn't have been touching it.  The employee walked over and said something to us in German.  Jer happened to be walking up at exactly that time and did not recognize the context clues.  I had no idea what the lady was saying, but I surmised that it was some sort of reprimand.  No sooner had she finished her sentence, than Jer reached out and started adjusting the scale, resulting in the loud clanking sounds again....right in front of her.  It was hilarious.  I'm sure she thought we were mentally deficient.  This time the lady firmly said, "Don't touch that" in English.  Kim and I had a hard time containing our laughter!
After getting our sample of the best chocolate I've ever tasted, we left the museum and headed back to the Koln cathedral.  Mass had ended, so we were able to walk through and see the newest stained glass window.  My camera didn't really do it justice, but I tried! 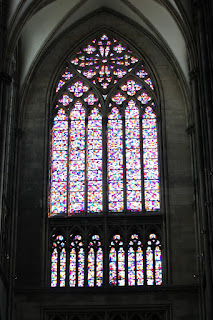 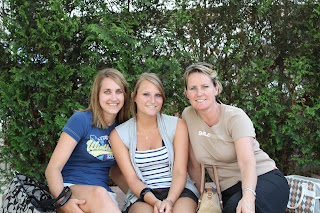 The ladies enjoying Koln
By this time, Thomas had gotten off work, so he drove to Koln and picked us up.  As if Jer wasn't happy enough after visiting a museum dedicated entirely to chocolate, Thomas informed us that he would drive us to the Nurburgring.  This is a famous track in Nurburg, Germany, where races are held, manufacturers perform tests on their cars, and the public gets access at certain times.  It's 21km long with no lanes, lots of curves, and no speed limit!  Super fast, super expensive cars can be seen everywhere you look.  Thomas, Karin, and Kim had been to the track before as observers, but they had never driven on it!  It was exciting that it was the first time for everybody.  Thomas drove us around the track in his Audi, but we kept it at a safe speed!  We lost count of the Corvettes, Porsches, Ducatis, and M-series BMWs that flew by us.  I think our hearts were racing the entire time, and there were many "Whoa!" "Wow!" "Look at that one!" exclamations made.  Ridiculously cool! 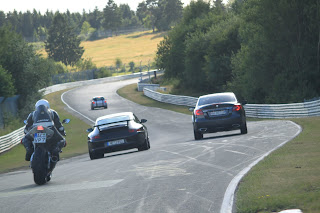 Had to be quick on the camera to capture these guys! 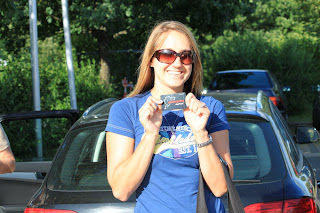 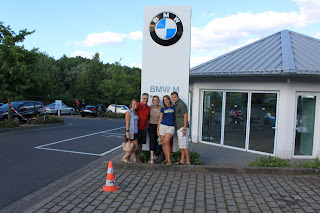 Exciting day for everybody
For dinner we ate at a very nice restaurant in the town of Andenau.  When we walked in, I hung back and pulled the waitress aside and told her to make sure she handed the check to me at the end of the night.  (Karin and I had a running joke that day because I had tried to pay for her lunch earlier, but was having a hard time finding my money in my bag, so she wouldn't let me.  Instead she paid for Jer and me, despite our objections, and told me I had to be quicker!)  I thought it would be funny at the end of the dinner for the waitress to bring me the check directly to me, unbeknownst to them, so that there would be no question about who was quicker!  After we finished our meal, we sat there waiting for our waitress.  She hadn't been to our table for quite a while, so Thomas got up to find her.  Apparently when he found her, she told him that I had asked for the check.  He nixed that idea and made her give him the check instead.  Sneaky!  Thomas and Karin were just too nice to us and we really can't thank them enough for the wonderful day we had. 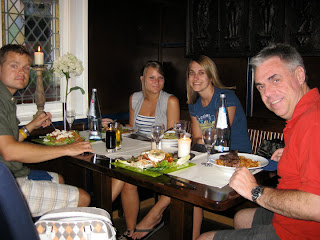 Great dinner to finish a great day
Posted by vanweezy at 11:38 PM