One of my favorites, Rachael, celebrated her 30th birthday last month. Her husband put together an AMAZING party at Stevens Park Golf Course in Dallas. 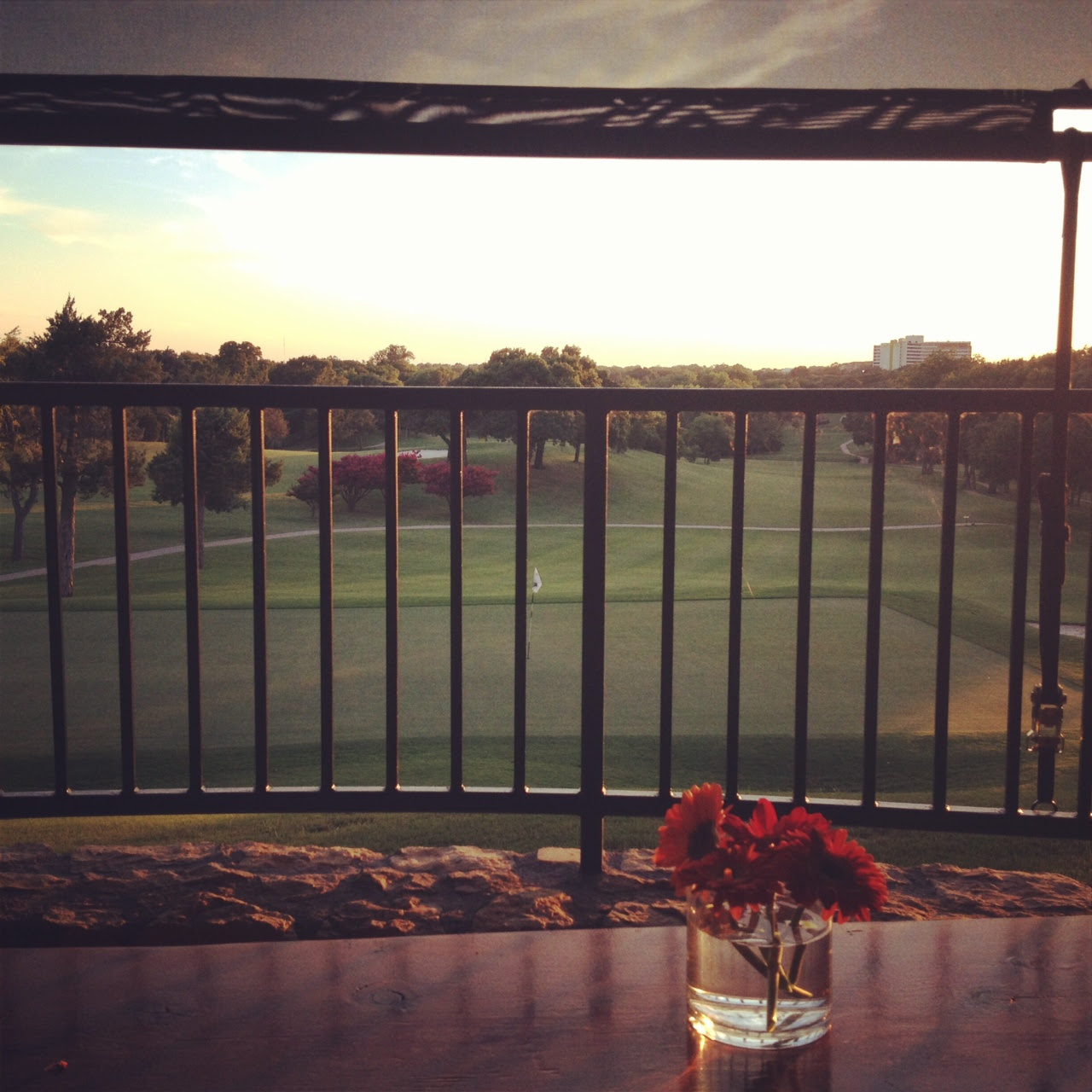 One of Rachael's favorite bands is The O's, and her hubby booked them for a private performance! Practically all of the party attendees had a front row seat for their show.  I was honored to be included in this really cool event. 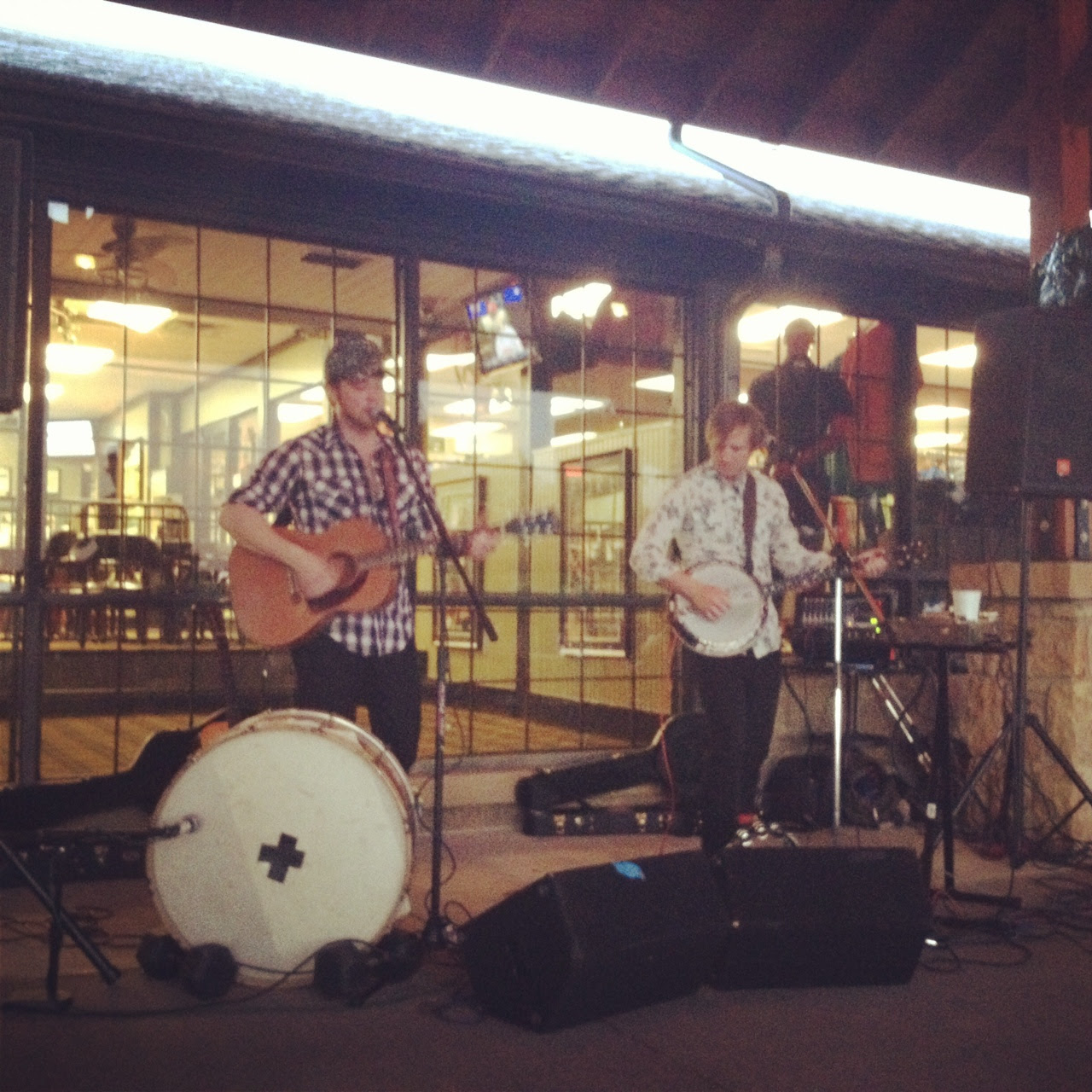 Love these beautiful girls - Rachael on the left and my sister, Jo, on the right. 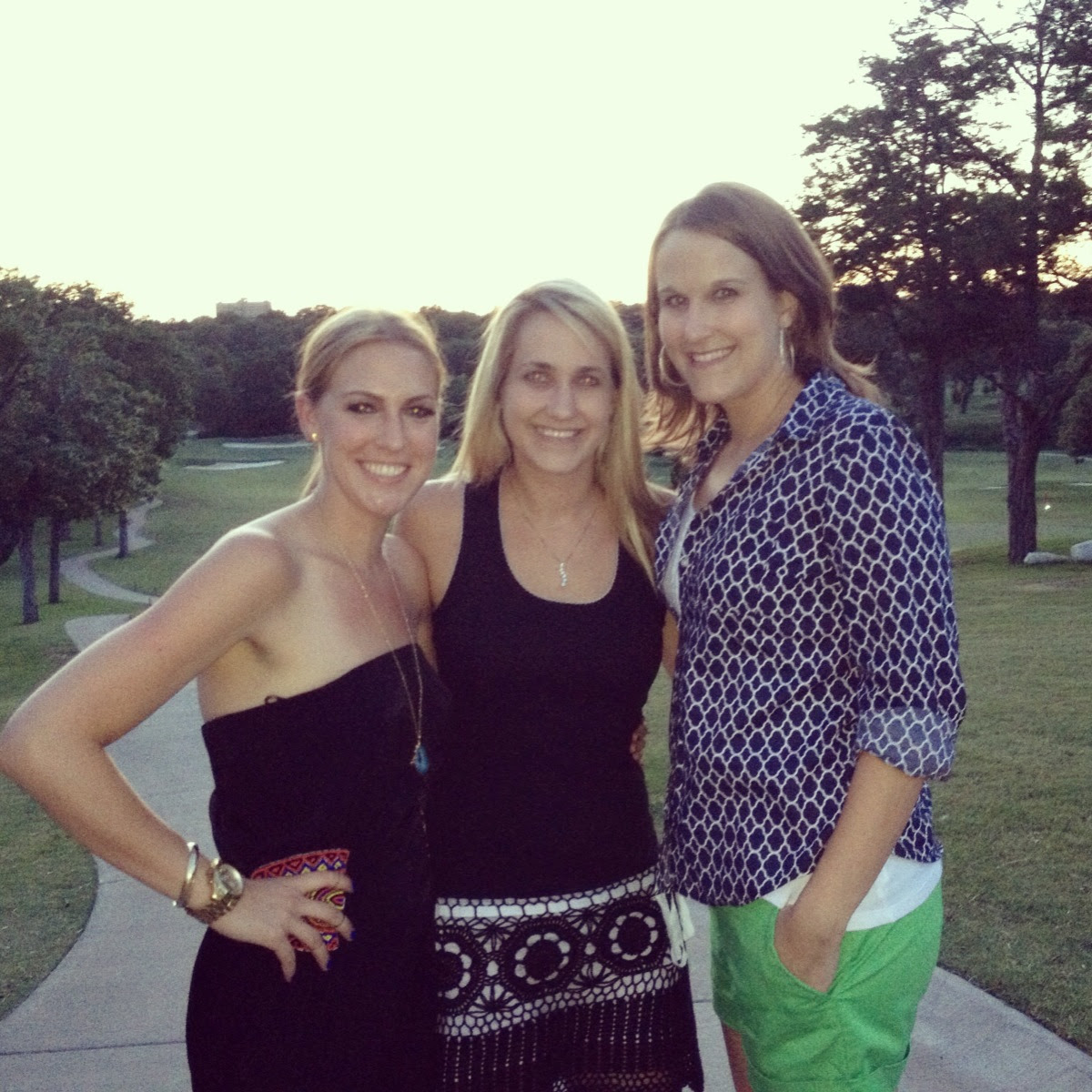 My bestie, Jenn, was also there.  She's the mom of a newborn, so I was thrilled that she got a night out and that I got to spend it with her! 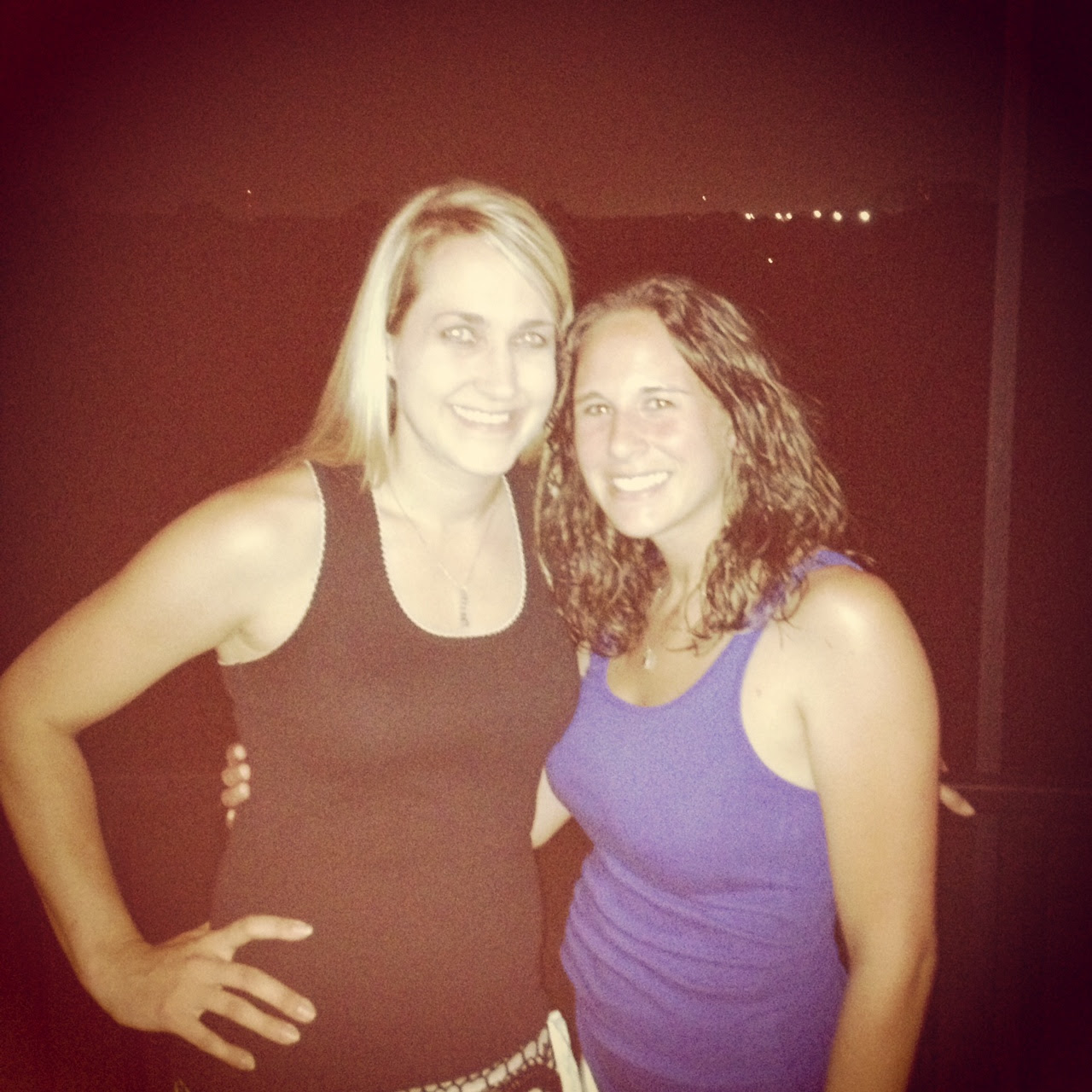 Posted by vanweezy at 1:30 PM No comments:

I know it's been a long time since I've done a post, and I apologize for that!  It wasn't for lack of things happening in my life!  We finally chose a paint color for the game room and decided on the decor.  We also switched up the furniture selection in that we decided to put the poker table (has a solid wood topper when not being used for poker) in the breakfast nook.  This would not only give us more room to move around in the game room, but would provide us with a casual eating area.  I think the room looks awesome, and I am very happy with the choices we made.  As a refresher, here's what the room looked like before: 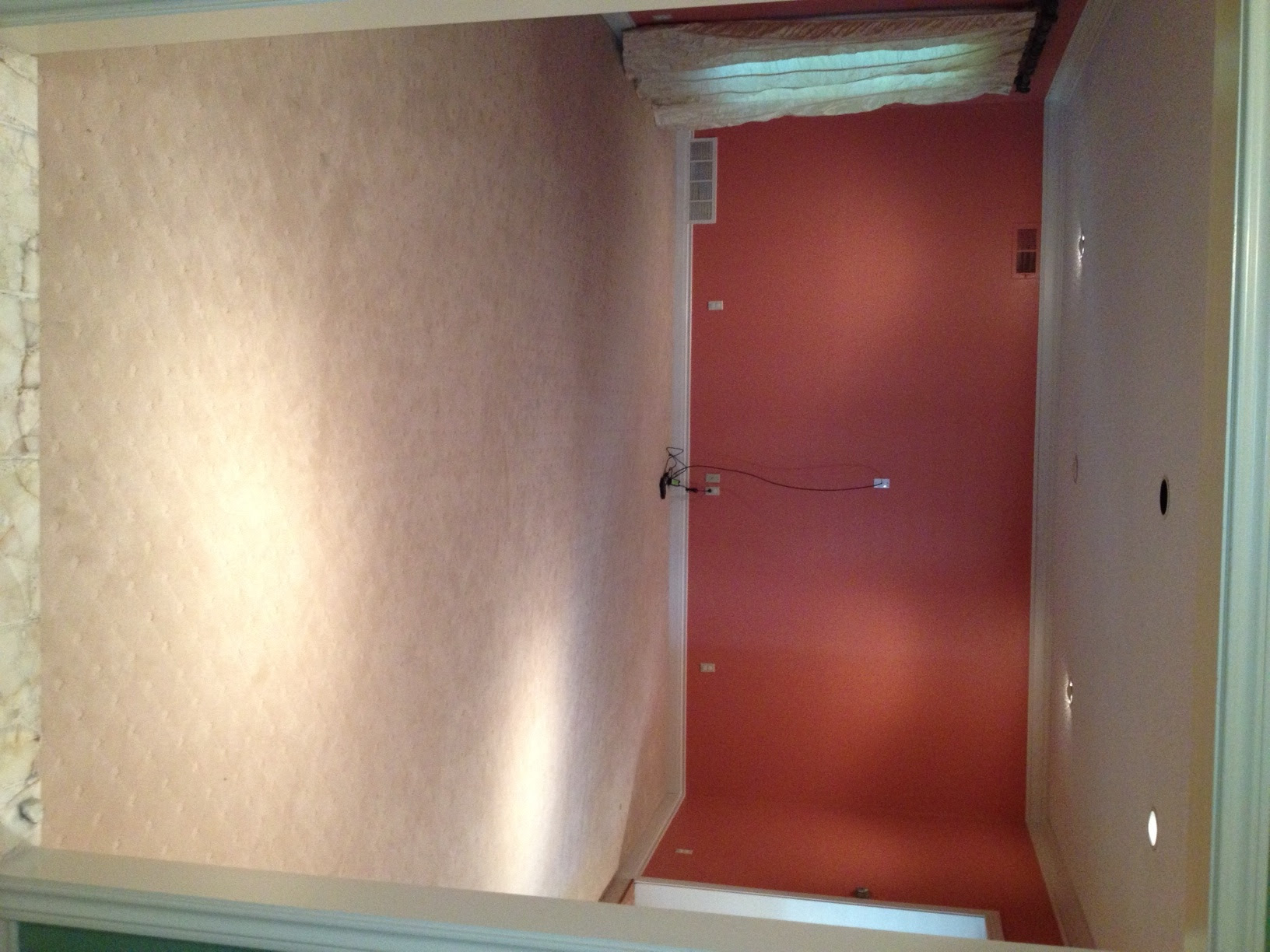 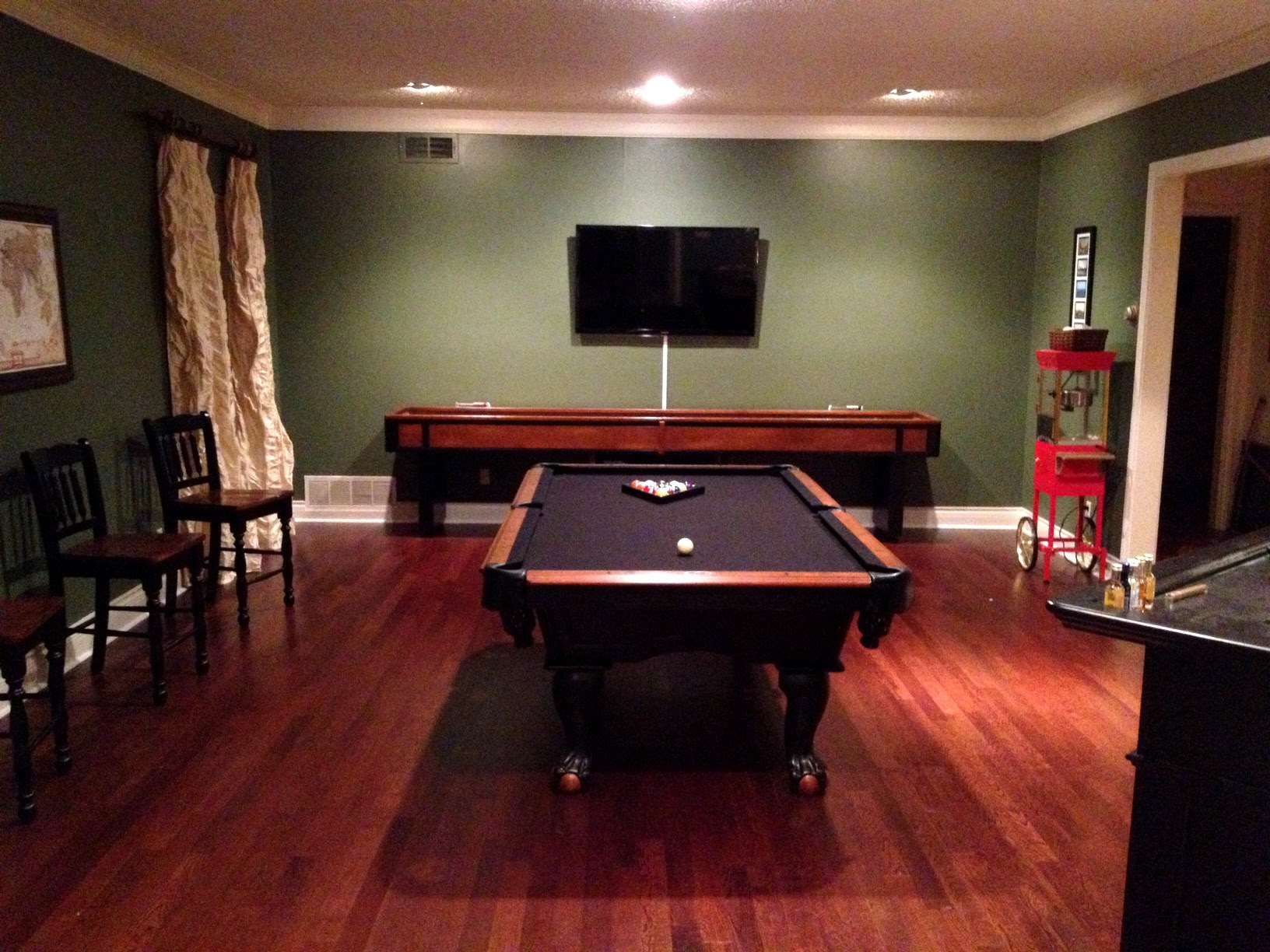 The wood floor looks beautiful, the paint color is appropriate for a game room, and there is plenty of space to move around the pool table. 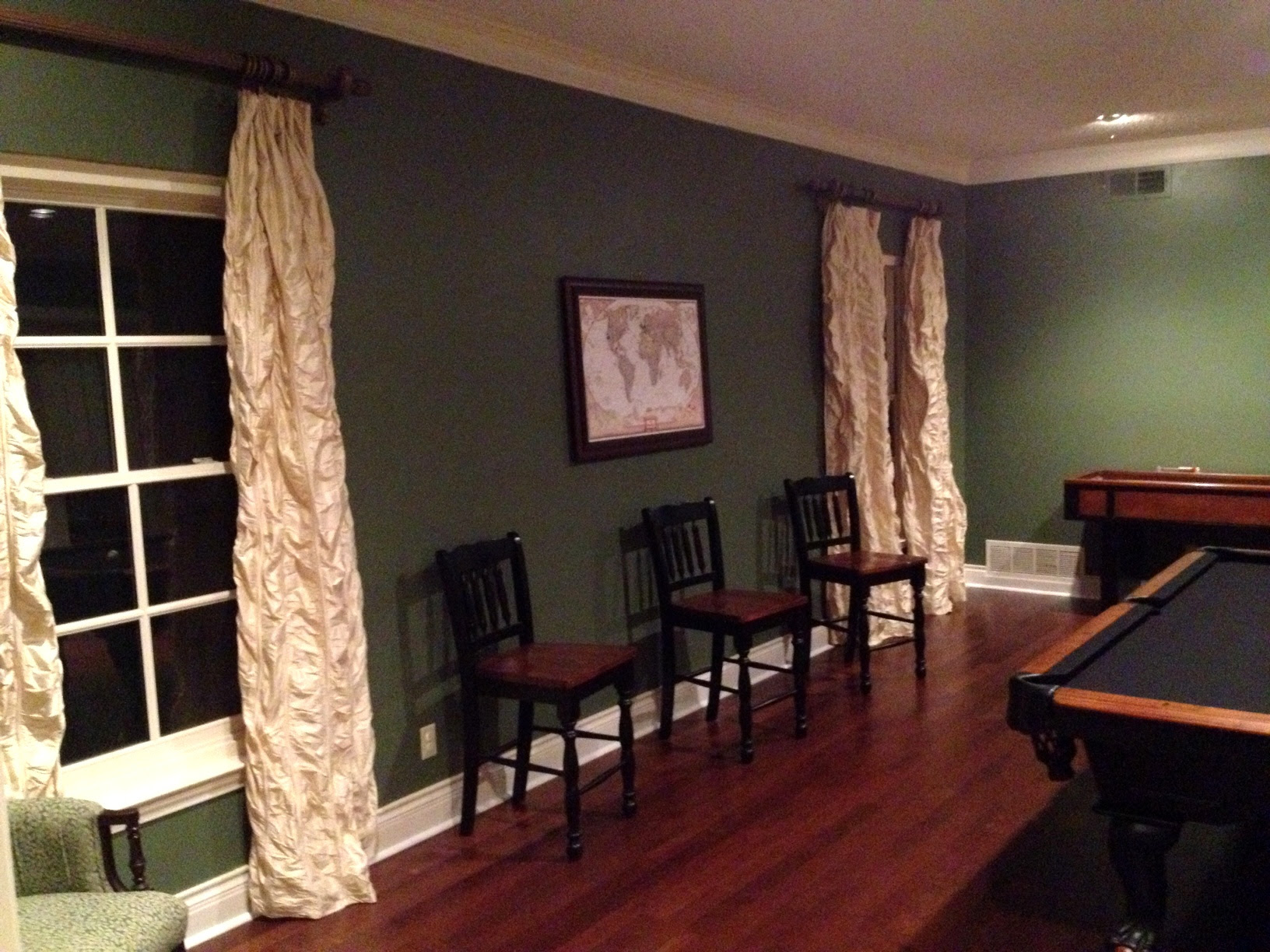 We've got bar stools for observers and made our world map with the places we've visited the focal point of that wall. 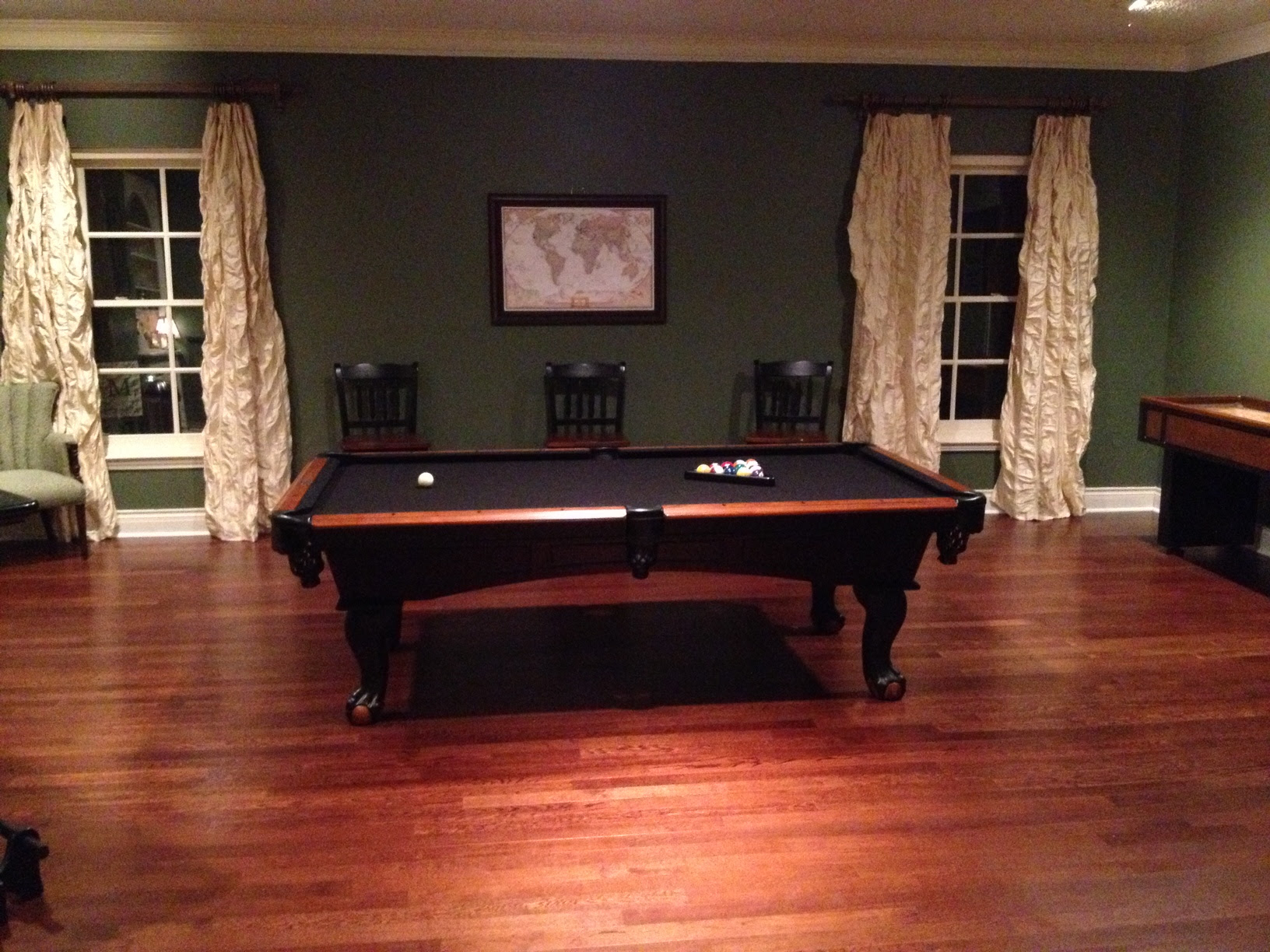 I left the curtains up that came with the house, because I thought they went along with the classy look we were going for.  I might eventually change the rods, but the existing ones will do for now. 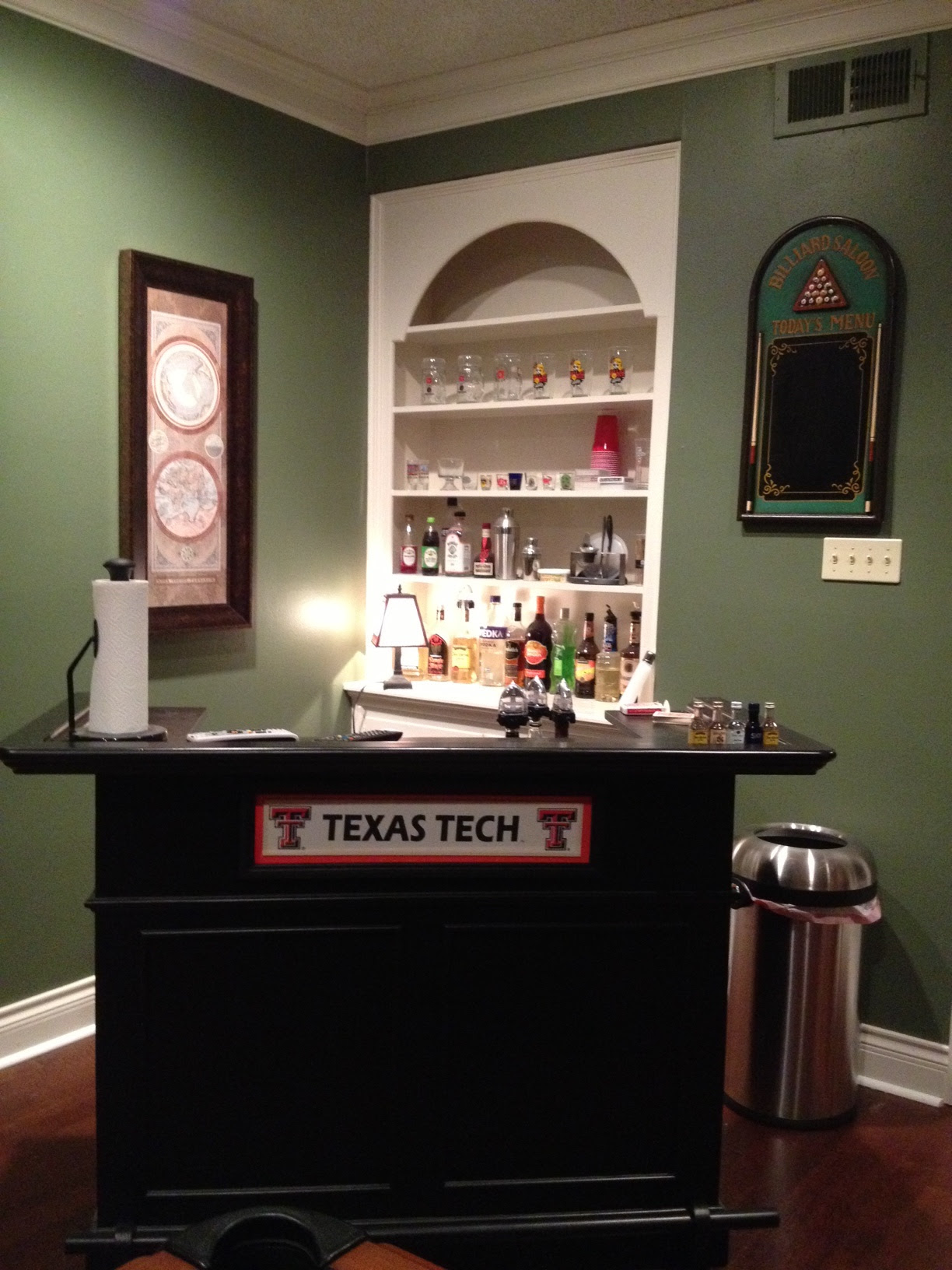 In this corner of the room is an awesome built-in feature with cabinets down below and shelving up top.  We thought this would be a great spot for the bar.  There's definitely room to move around back there and mix up some drinks! 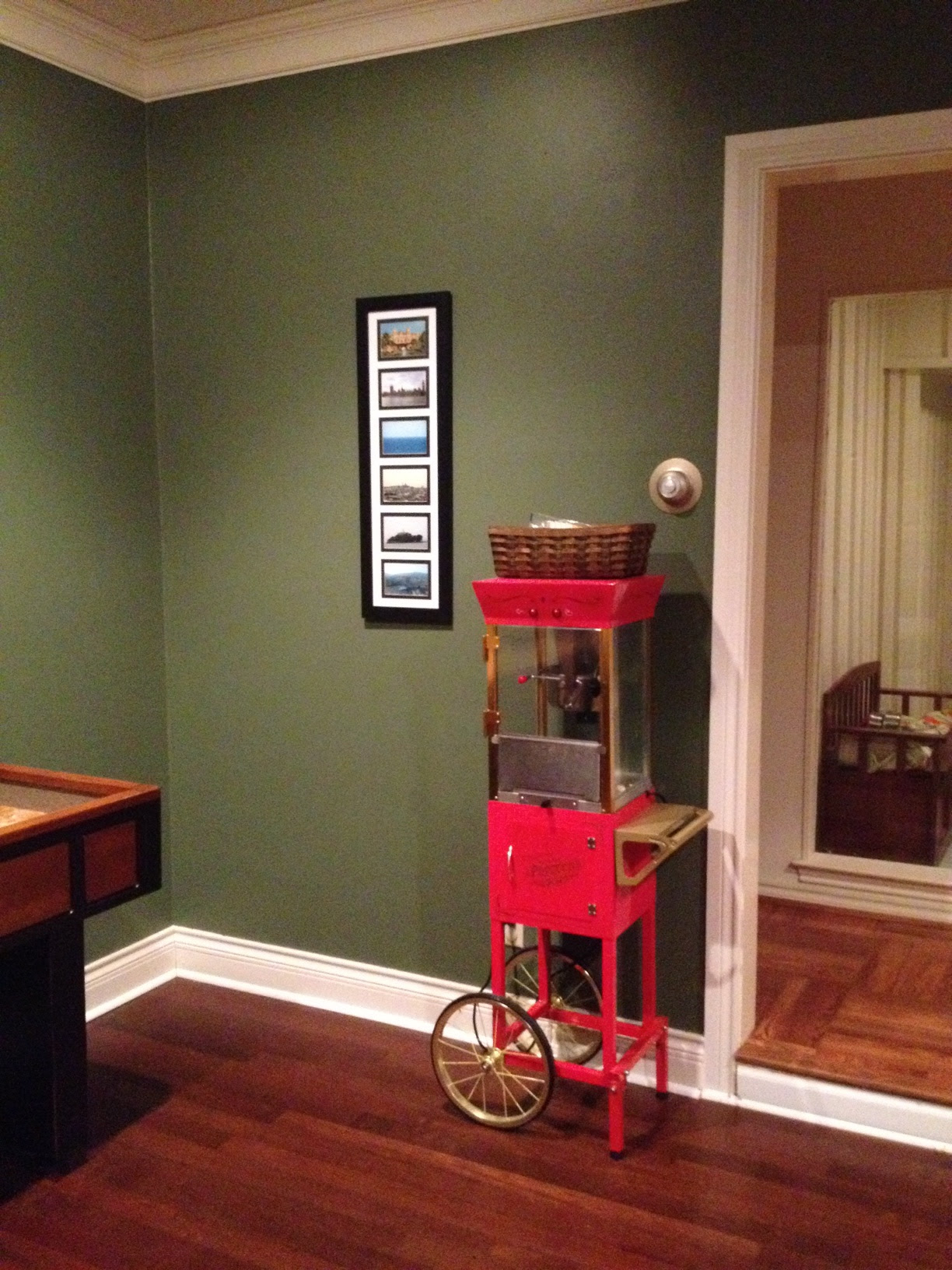 In this corner of the room, we placed the yummy popcorn maker and hung the frame that has 6 of the best pictures we've taken on our vacations. 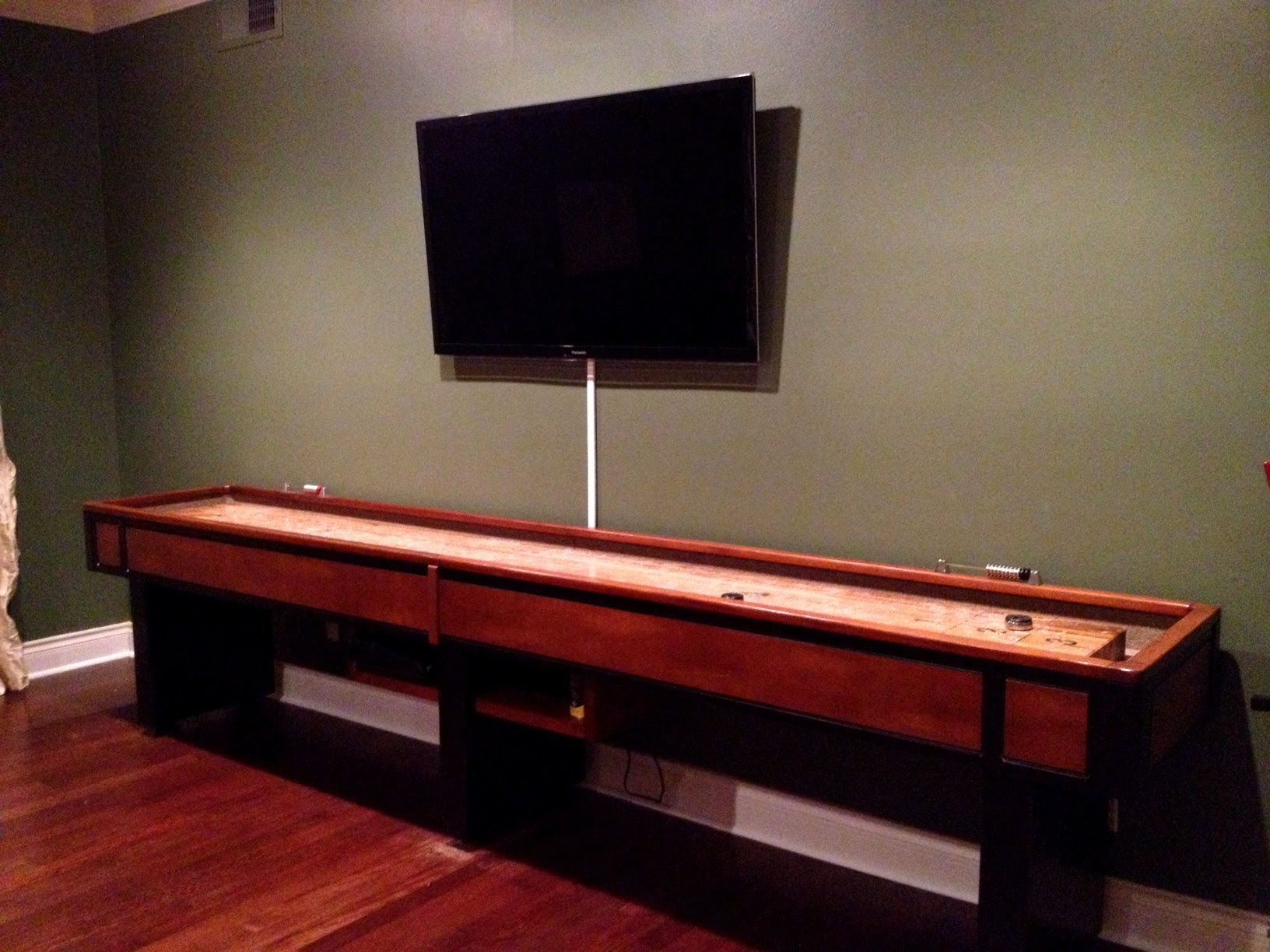 The long wall was perfect for the shuffleboard table.  We mounted our TV above it and didn't hang any other decorations to keep the look simple.
Posted by vanweezy at 10:16 PM 4 comments:

The new house has a never-ending to-do list, so it's nice when we can scratch a couple things off of it. There was an existing light fixture in the breakfast nook that had, ummmm, character? I don't know what you want to call it, but it certainly wasn't my style. 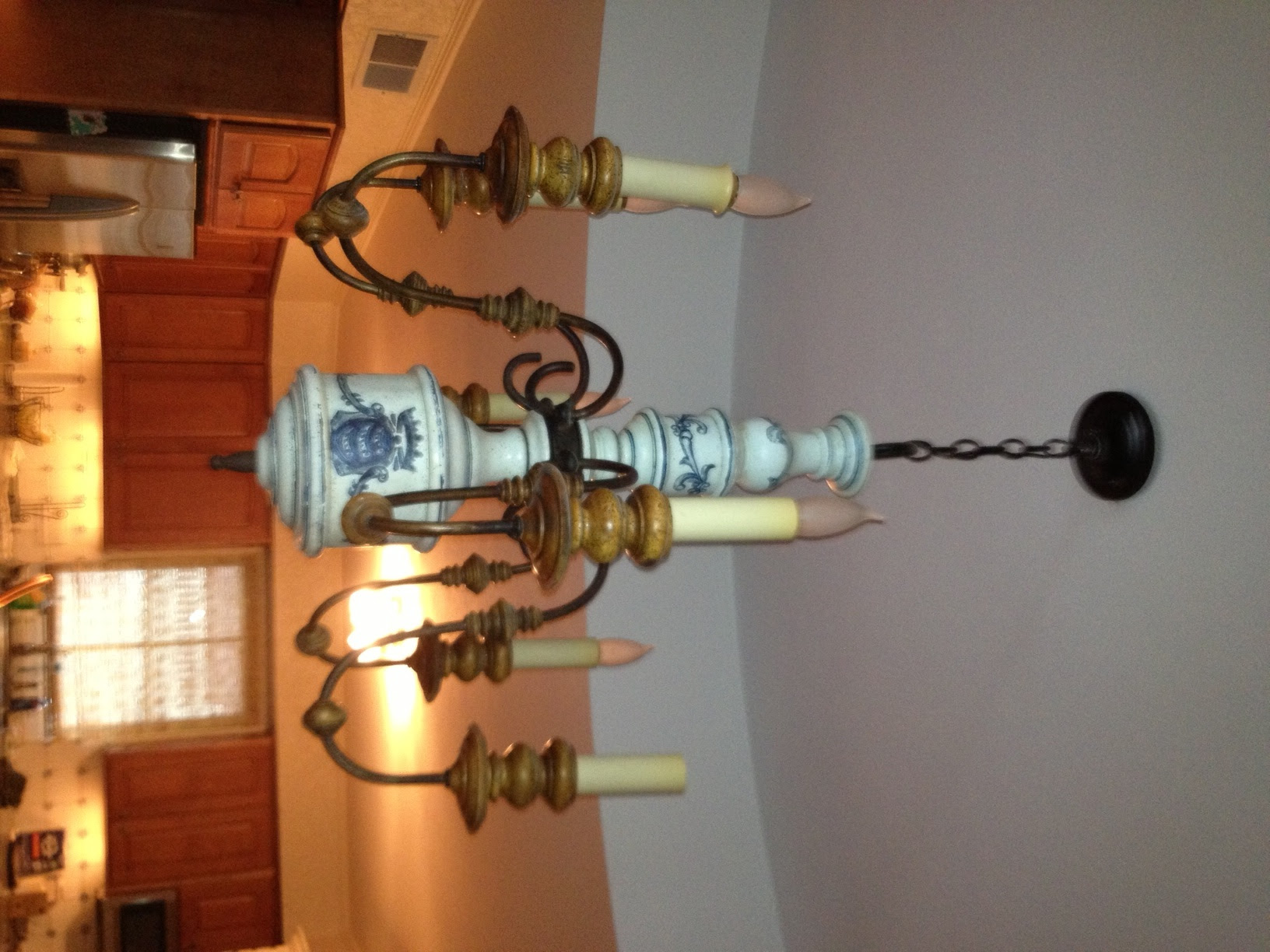 We finally got around to putting up the new one this weekend.  It's modern and simple, and that's all it needed to be. 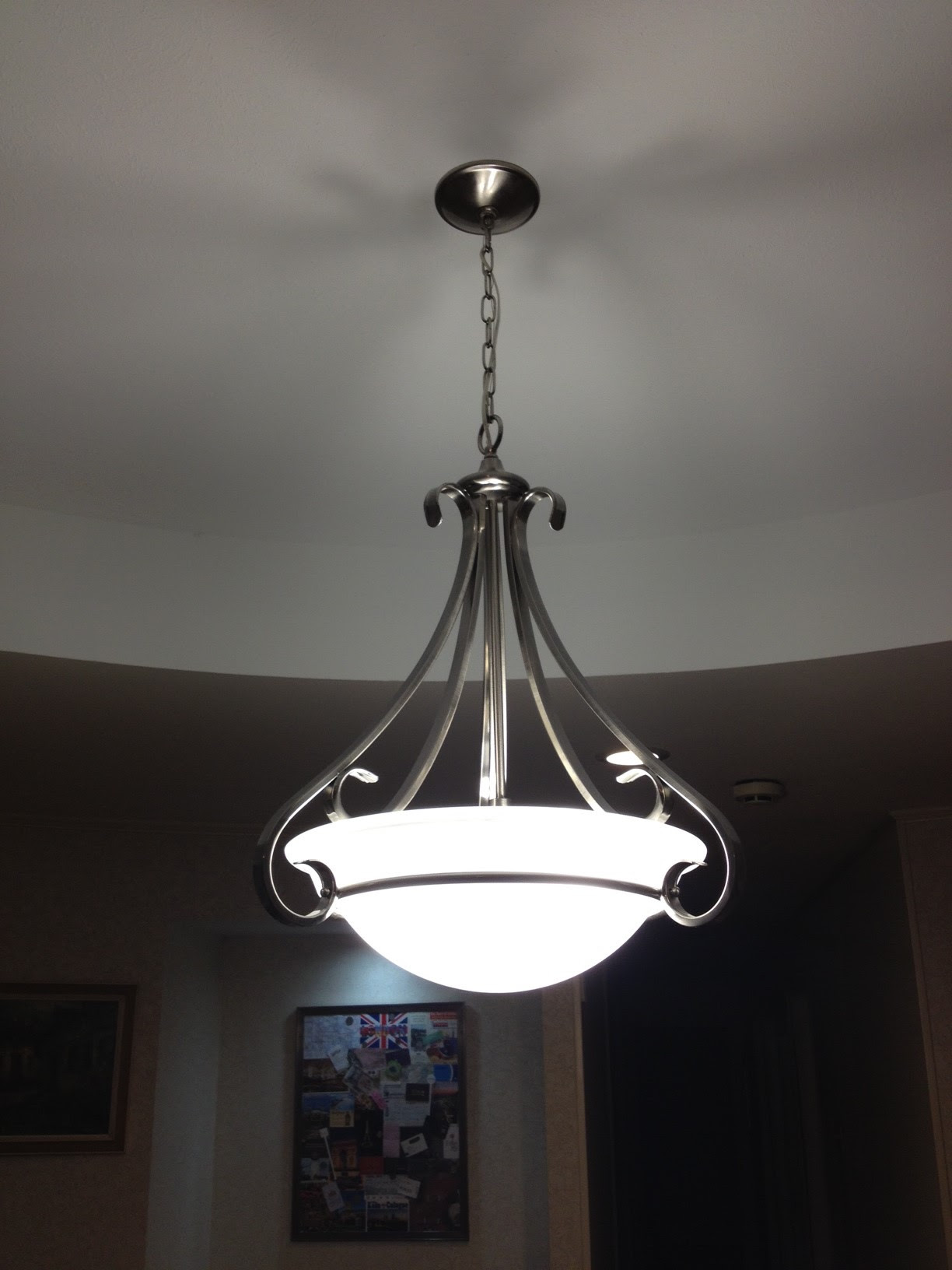 Dutch wanted to help as well: 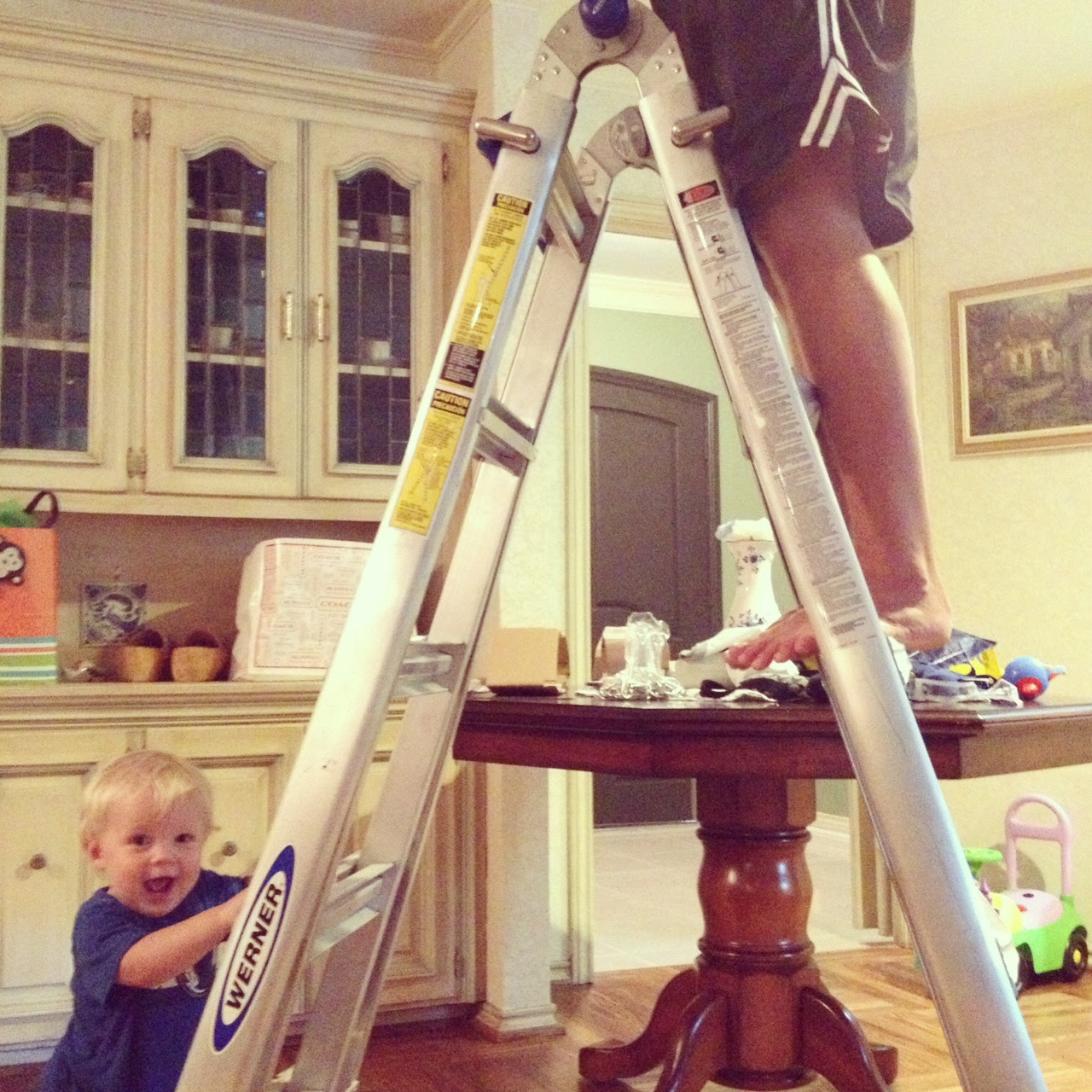 I also put together a centerpiece for the dining room table. Our dining room has great windows that face the front of the house, so I knew I wanted something pretty that would be seen from the outside. I'm not an elaborate, over the top person, so this arrangement is simple and tasteful. Again, that's all it needed to be! 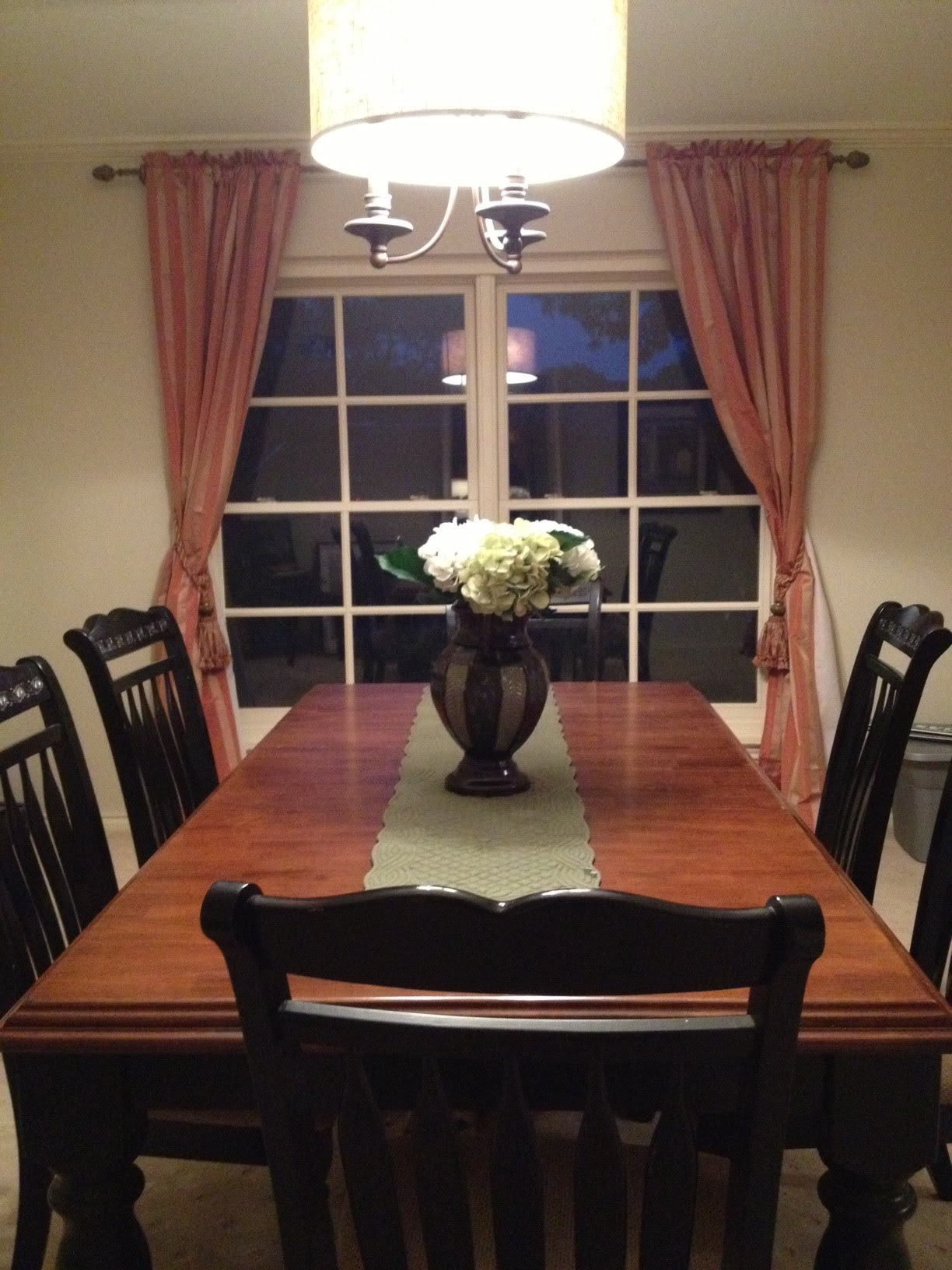 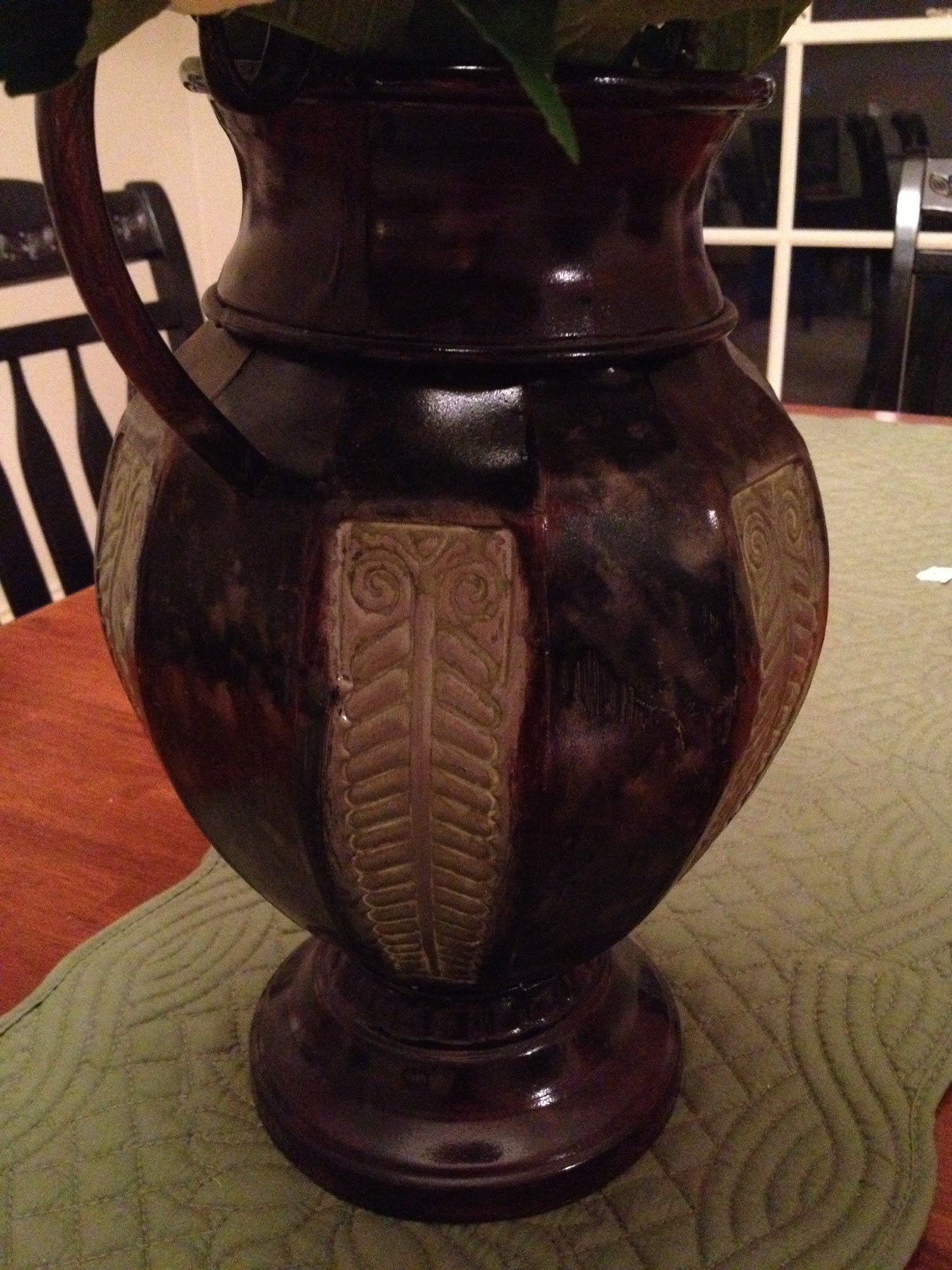 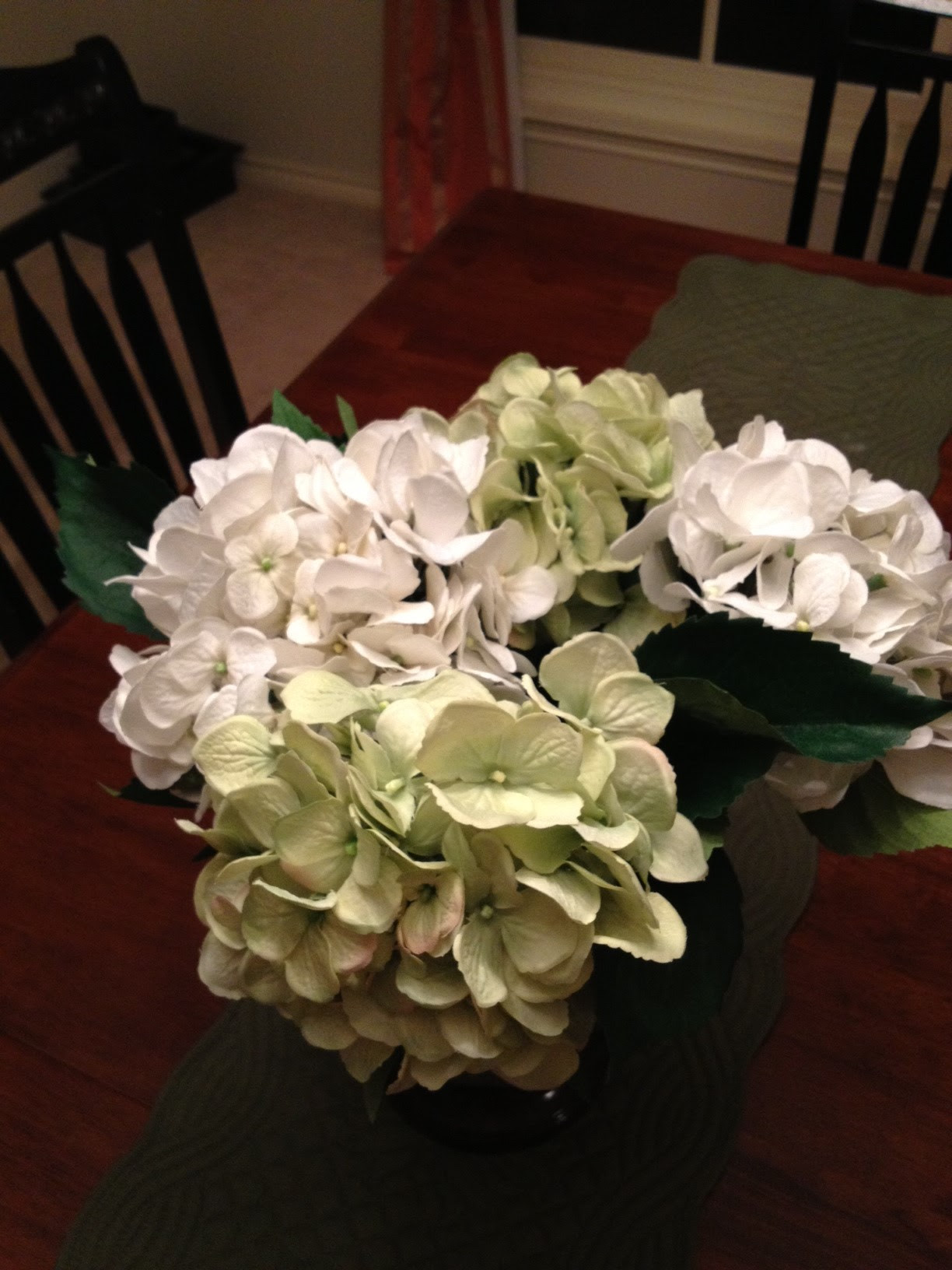 The best part is that it cost just around $30. The dining room still needs to be painted, have some pictures hung, and have the curtains replaced. Jeez! I feel like each room has a similar to-do list. When you work, have a child, and have mobility restrictions, the tasks can sometimes seem overwhelming. At least I'm chipping away at them, little by little.
Posted by vanweezy at 10:56 PM No comments:

We had a great Fourth of July this year.  Dutch is a little over 16 months old, so he can actually appreciate some of the festivities now.  Holidays are definitely more fun with a little one around.  My neighborhood puts on a parade and carnival, so we invited over my sister and her family to enjoy that with us.  It's pretty sweet to be able to walk just a block over and participate in the free events.  We set up shop in a neighbor's yard and enjoyed watching the floats, cars, kids on bikes, decorated dogs, and festive walkers go by.  Here was our group: And here's a quick peek into what the parade was like:

The kids were pretty excited that candy was thrown at them!  I picked up a sucker and let Dutch experience that for the first time.  He enjoyed it! 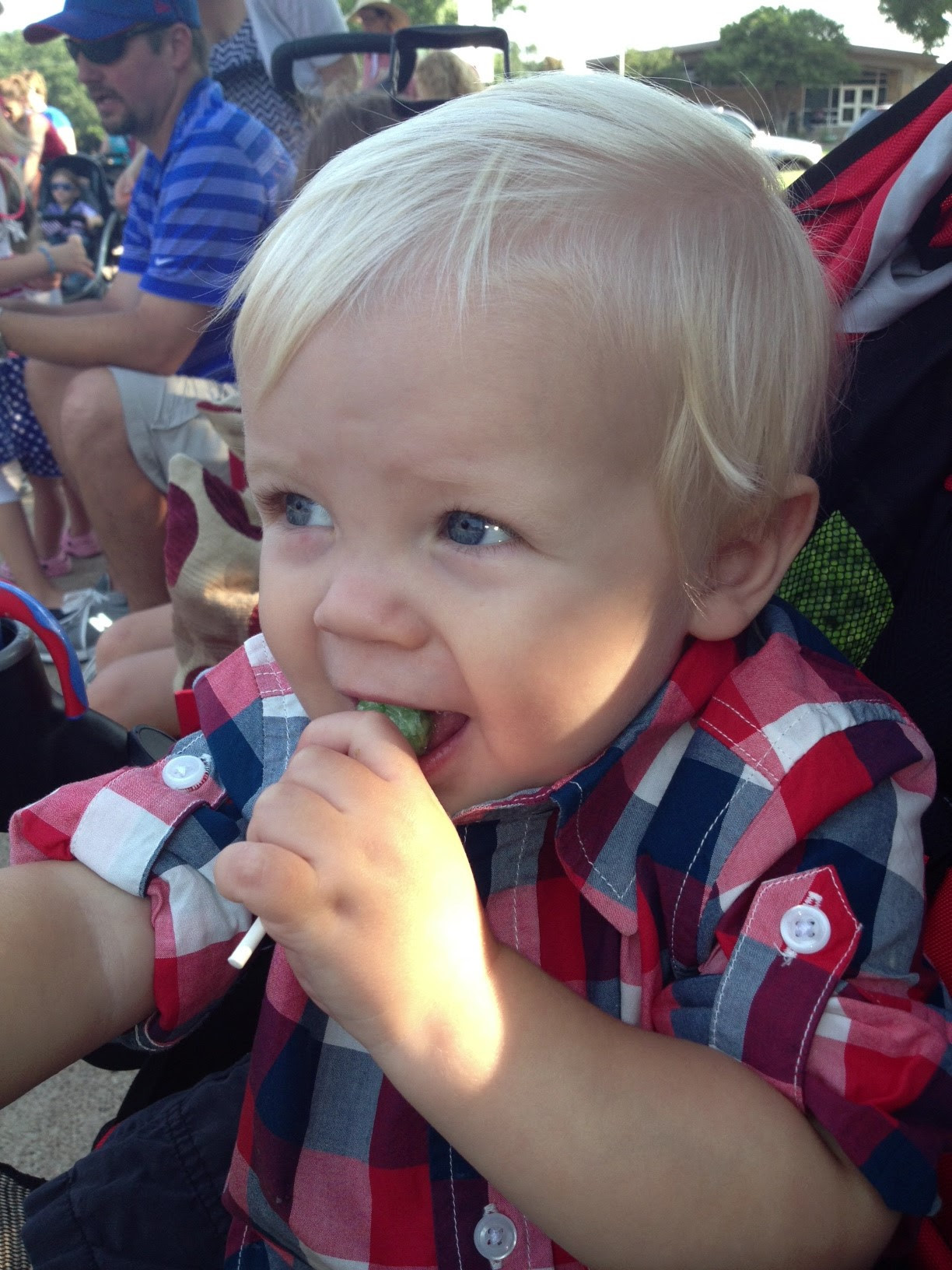 Of course we tried to be festive for the 4th.  Dutch had on his cute red, white, and blue shirt.  He even humored me and wore these sunglasses for a brief minute: 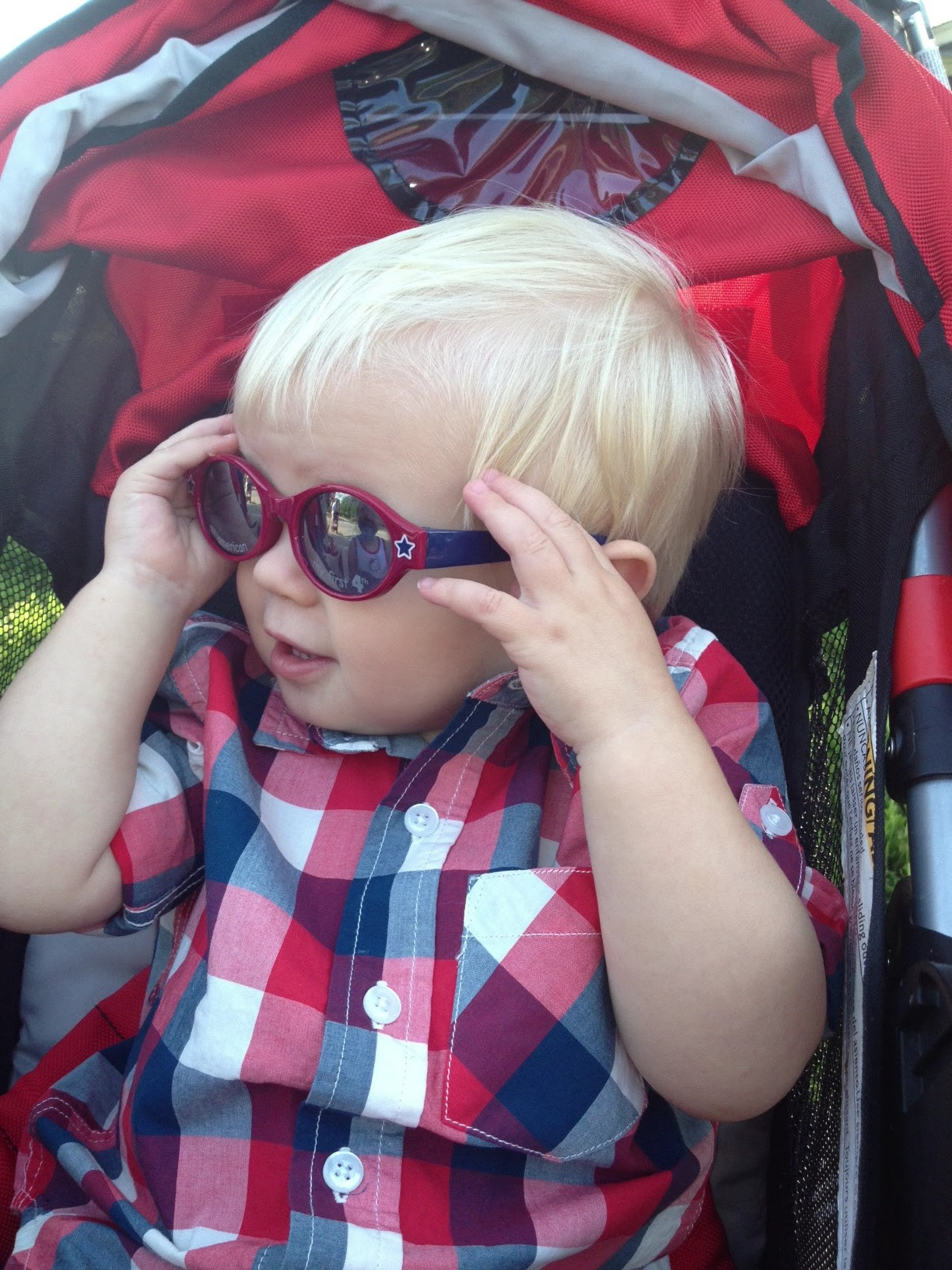 My niece, Olivia, had gotten her nails painted red and blue a couple days prior.  She was so excited about them, that she asked my sister if I was home so they could drive by and show them to me.  It broke my heart that I wasn't home at the time, so I knew I had to make it up to her.  I painted my nails to match.  :) 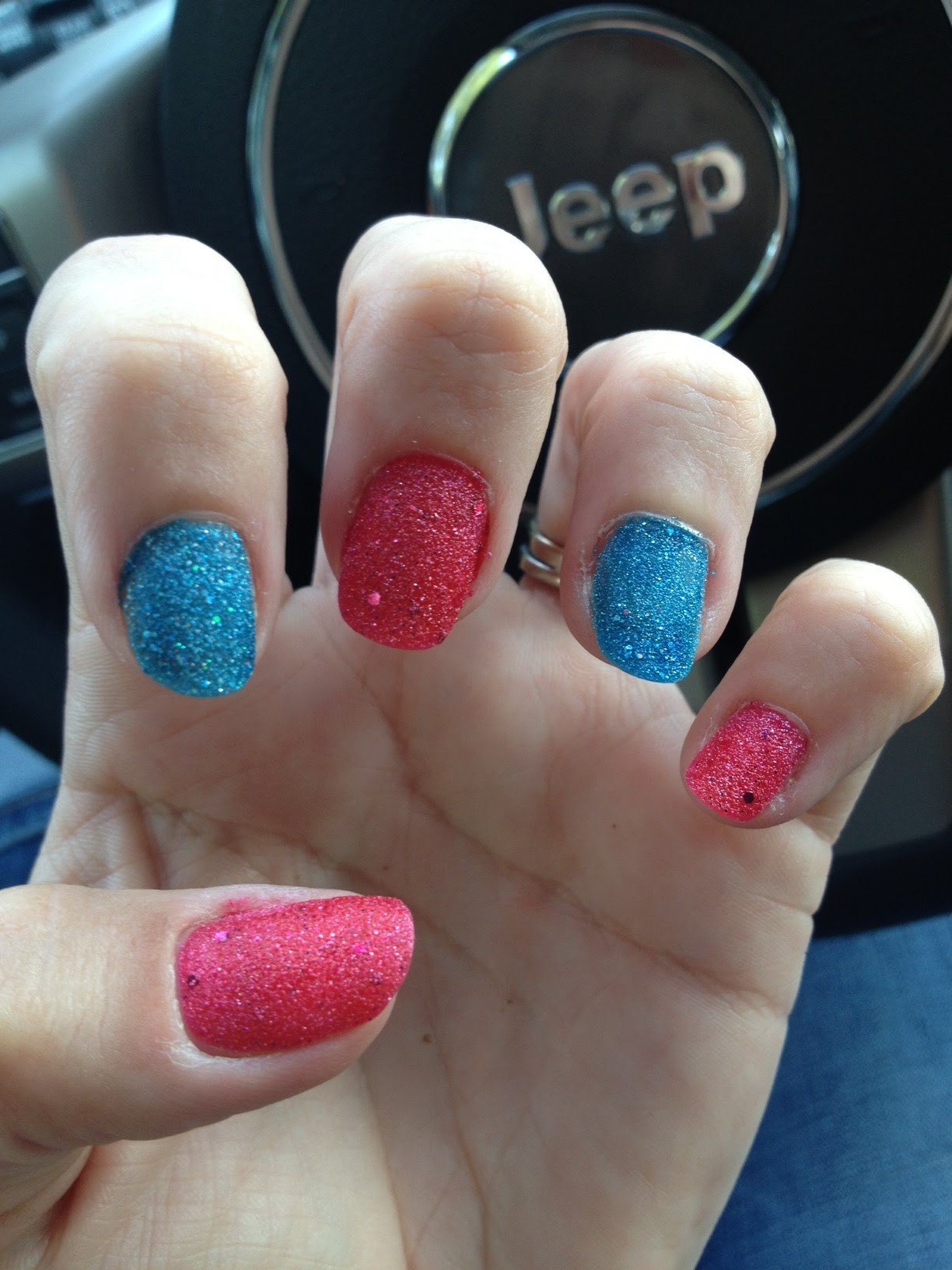 After the parade was over, we headed to the carnival.  It had stands for free popcorn, snow cones, lemonade, and cotton candy.  It had a small petting zoo, a bounce house, and a kids craft area.  They gave out prizes to various parade participants and did a water balloon toss competition.  I was very impressed that my neighborhood put this on, and also very pleased that we chose to live here! 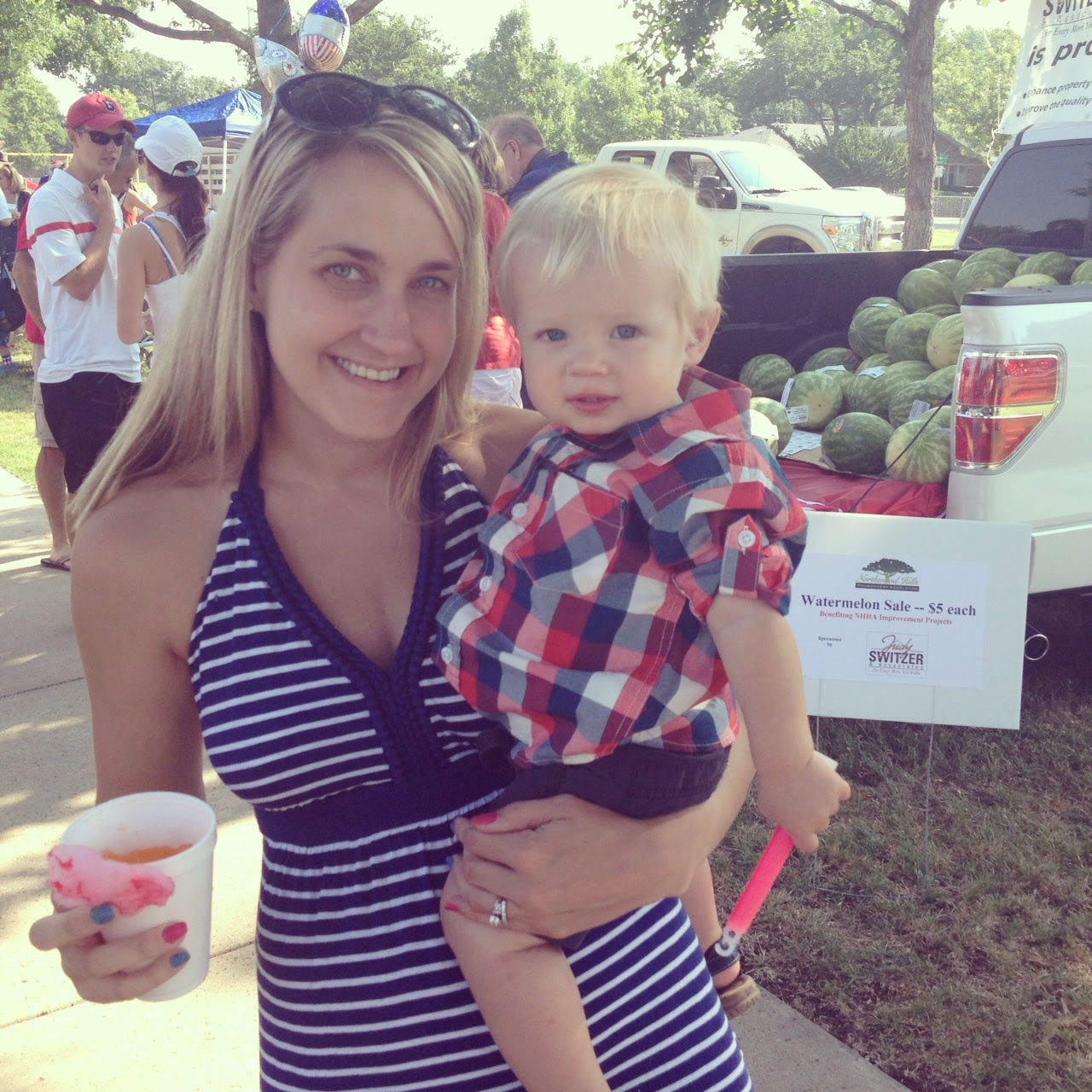 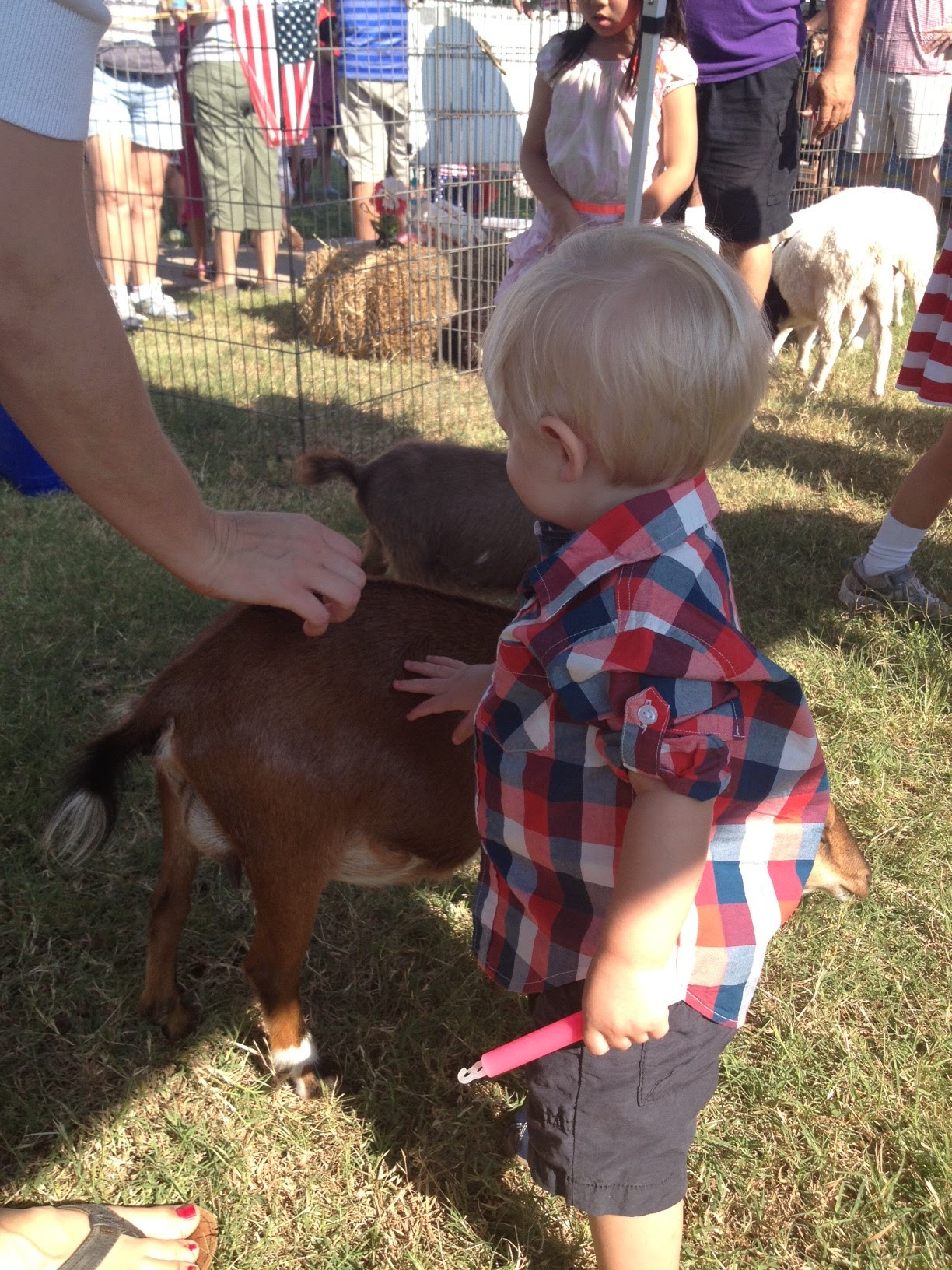 Dutch's favorite part was the petting zoo.  He cracked me up because he would point at each animal as it went by, like, "Mom!  Did you see that one??"

Later that day we decided to introduce Dutch to some fireworks.  We gave him poppers and he thoroughly enjoyed throwing them and hearing the bang.

Then we went outside and Daddy put on a mini-fireworks show.  Dutch was enthralled.  I can't wait until he gets a little older and we can stay out late and show him a real fireworks show.

In the afternoon, we headed over to our friends' house to swim.  Dutchie had a great time in the pool, but he did get a little jealous when the big boys were playing ball in the pool. Such a sweetheart. 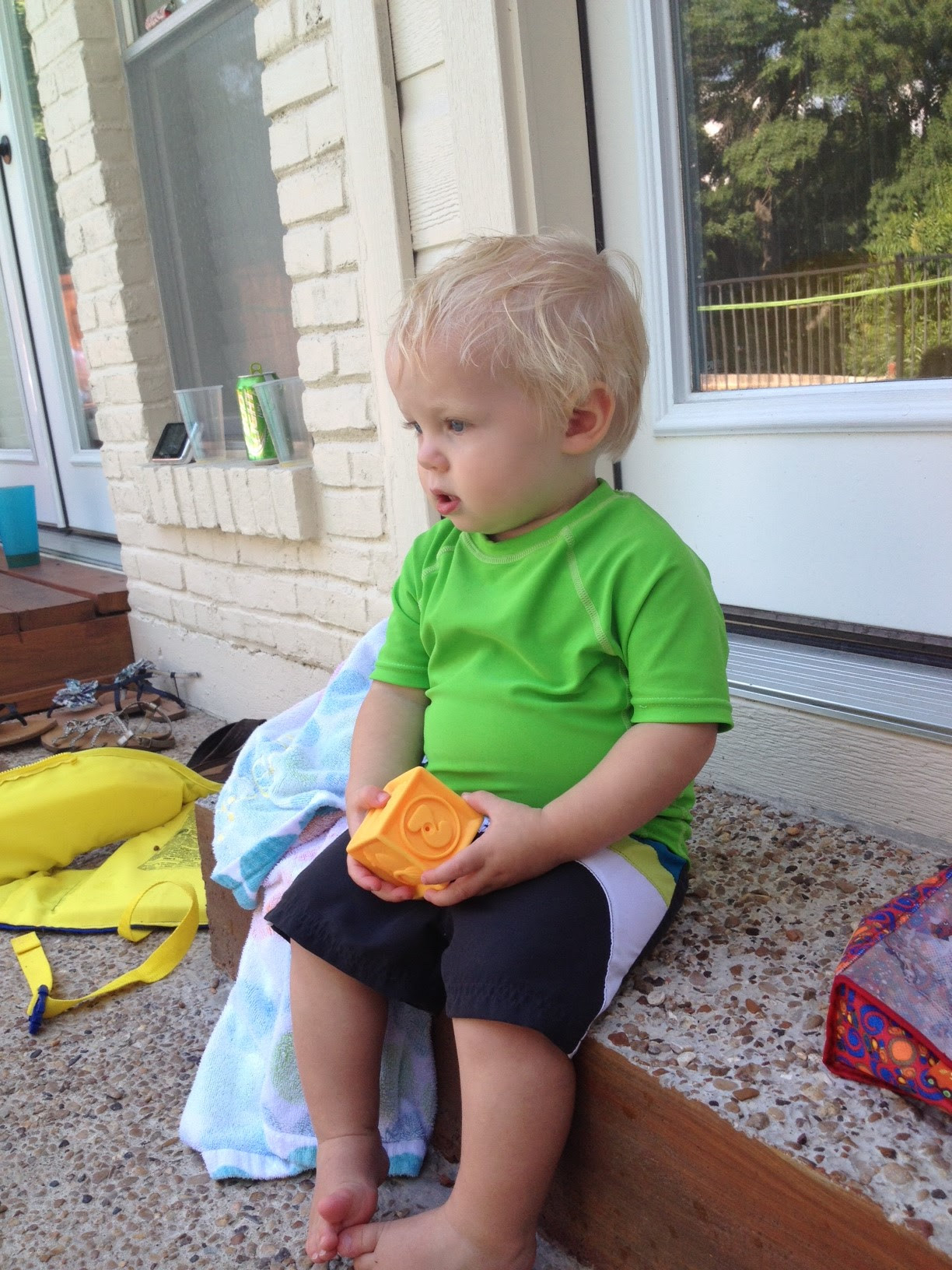