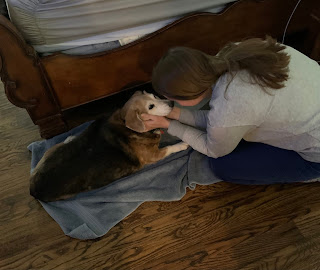 Well, this was an extremely tough loss. 16 years. How do you put into words what a 16-year friendship means to you? I got Riley from a pet store in Lubbock when I was living alone and wanted a companion for my last year in grad school. He had a big head and a tiny body and I was intrigued by the sign that said "Beagle/Corgi mix." Over the years he grew into his big head (and then some) because he never passed up an opportunity to eat. Didn't matter if the item in question was really edible or not - he would give it a shot. He had a tank for a stomach because crayons, toys, dryer sheets, wet wipes, and even a King-sized Toblerone bar were no match for him. Our exchange student Kim learned of his insatiable appetite when she left her bag on the floor one time. (He smelled gum). Our friend Mike saw his skills first hand when Riley jumped waist high to snag a cookie from him. My mom lost a bag of bird seed because Riley got hungry one day. Meezy would occasionally taunt Riley by holding food out of his reach, but overall Riley had a pretty good record against him, including snagging a whole Taco Bell burrito when Meezy got too cocky. If you've known me over the past 16 years, then you've probably known Riley (and his signature one ear up/one ear down look). He's been my shadow. I joke that if we put a pedometer on each of us, we'd have the same number of steps at the end of the day. I originally got him so that I wouldn't feel lonely, but I never could have imagined he'd spend 16 years making sure I wasn't. He was a GOOD, smart, mischievous, hungry, and above all else - loyal - friend. Rest in peace Riley (Bubba, Riley Roo, Rooster Dooster, Biggies, Ri Ri). You were one of a kind. March 2005 - February 2021 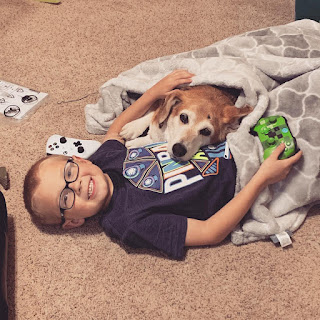 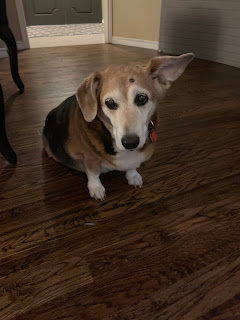 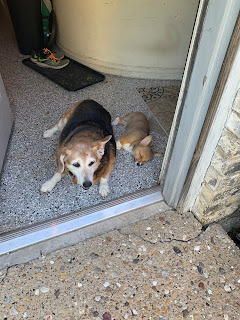 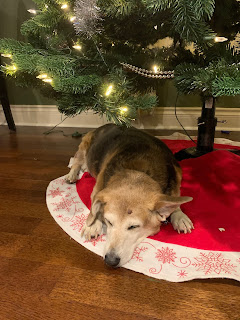 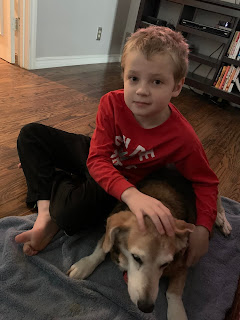 Posted by vanweezy at 9:40 AM No comments:

We let Dutch invite his closest friends over for some outdoor fun to celebrate his birthday. It was a beautiful day and they played soccer most of the time. That was followed up with some Domino's pizza and an Oreo ice cream cake (two of Dutch's favorite things). We also brought him up to his school to get a video in front of the message board. Jude decided to sing happy birthday to him (his own rendition), which resulted in this hilarious exchange:

I can't buy or borrow books fast enough to keep up with his reading habits. He brings books to school so he can read if there's any down time. He stays up late every night reading in bed. He also loves Minecraft, riddles, anything chocolate, big homemade waffles, and walking home from school. He's a stereotypical big brother who teases and tricks his little brother into doing things for him. He LOVES his dog, Zoey. 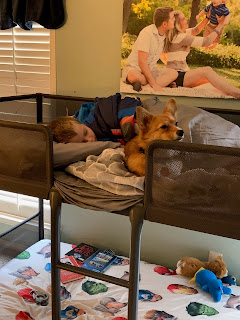 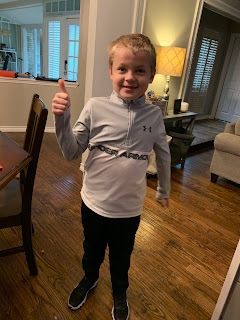 Posted by vanweezy at 9:35 AM No comments:

It was not an eventful birthday this time around thanks to a global pandemic, but luckily this kid doesn't need fanfare to enjoy himself. He's happy with donuts and just spending time together. There's definitely something special about him. He's the one who comes running when I say, "Look, there's a lizard!" He's the one who is already bringing food to his mouth before I have to say, "Just try it." He's the one who can put down the Ipad when a new puzzle or board game or Lego set is presented. He loves reading and excels at it. He loves his dog, Zoey, and mentions her in every school assignment he's allowed to. He uses big words and sometimes answers math problems faster than his big brother. He loves snuggly pajamas and cold pillows. He's also got a tender heart and gets his feelings hurt easily. He brings me happiness every single day. 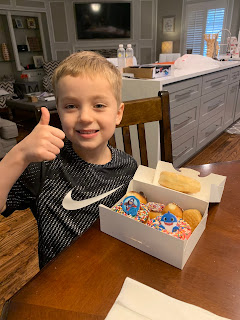 He started Kindergarten this school year, but only virtually for the first semester. For him, that meant getting all of his daily work completed in about an hour and then not having anything to do for the rest of the day. He's very advanced in reading and pretty advanced in math, so it's not like he was falling behind, but I didn't want him sitting idle for too long. I sent him to in-person starting in January and I think it's been great for him.

He has fallen in love with Hamilton, the musical. He tries to memorize a lot of the lyrics and I often find him listening to it in his room. He's been known to wake up at 5am and sneak into the living room to start watching TV. He's willing to try new foods, but loves pizza, kolaches, and broccoli and cauliflower the best.

I think my favorite thing that he's said recently was "Someone at school today said 'Jude' and I answered, 'Depends. Who's asking?', like in Hamilton." That kid, man. Six going on sixteen.

Posted by vanweezy at 9:23 AM No comments: