This next transformation I'm going to share with you brings a big smile to my face!  I'm still beaming at how great the results have turned out.  The dining room in our house was beyond boring.  There was no paint color on the walls, the drapes were cheap and sheer, the gold drapery hardware was left over from the previous owners (and I had spray-painted it silver), and our dining set was the one we had purchased 8 years ago, on the cheap, from Ashley Furniture.  It was time for a major change! Here are the before pictures: 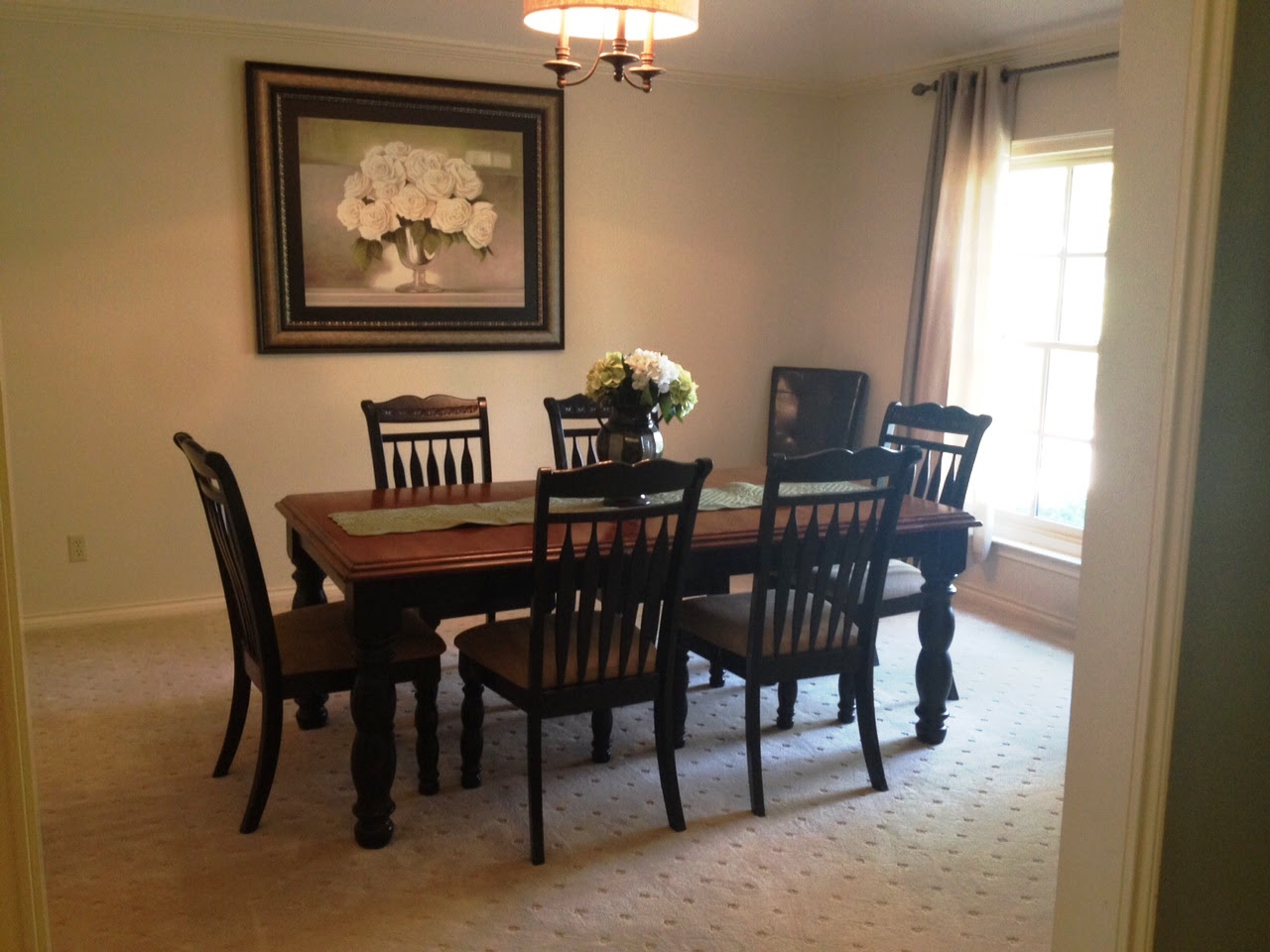 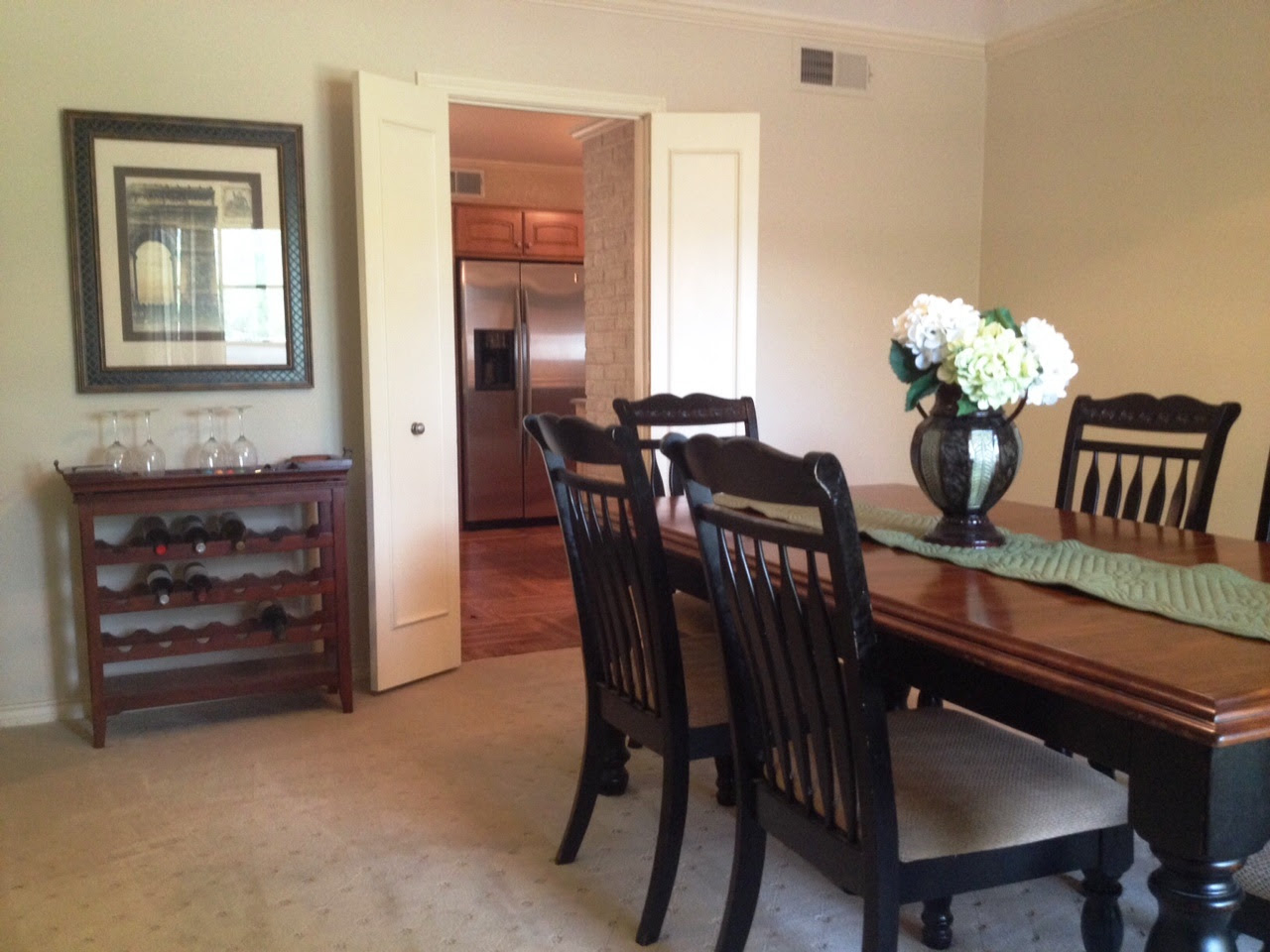 Booooooring!  I decided I wanted a very formal dining room, with a modern and classy color scheme, and seating for a large group.  I chose Cement Gray paint from the Martha Stewart paint collection, and after I got it on the walls, I knew I had chosen the right color.  I got brushed nickel drapery hardware from Bed, Bath & Beyond in a simple design and purchased these Montecito panels from ZGallerie.  The main transformation came from the new furniture, though.  This was our splurge purchase. We found an awesome table from ZGallerie with self-storing leaves on both ends and 8 matching chairs.  Check it out! Forgive me, the tags are still on!  Lol 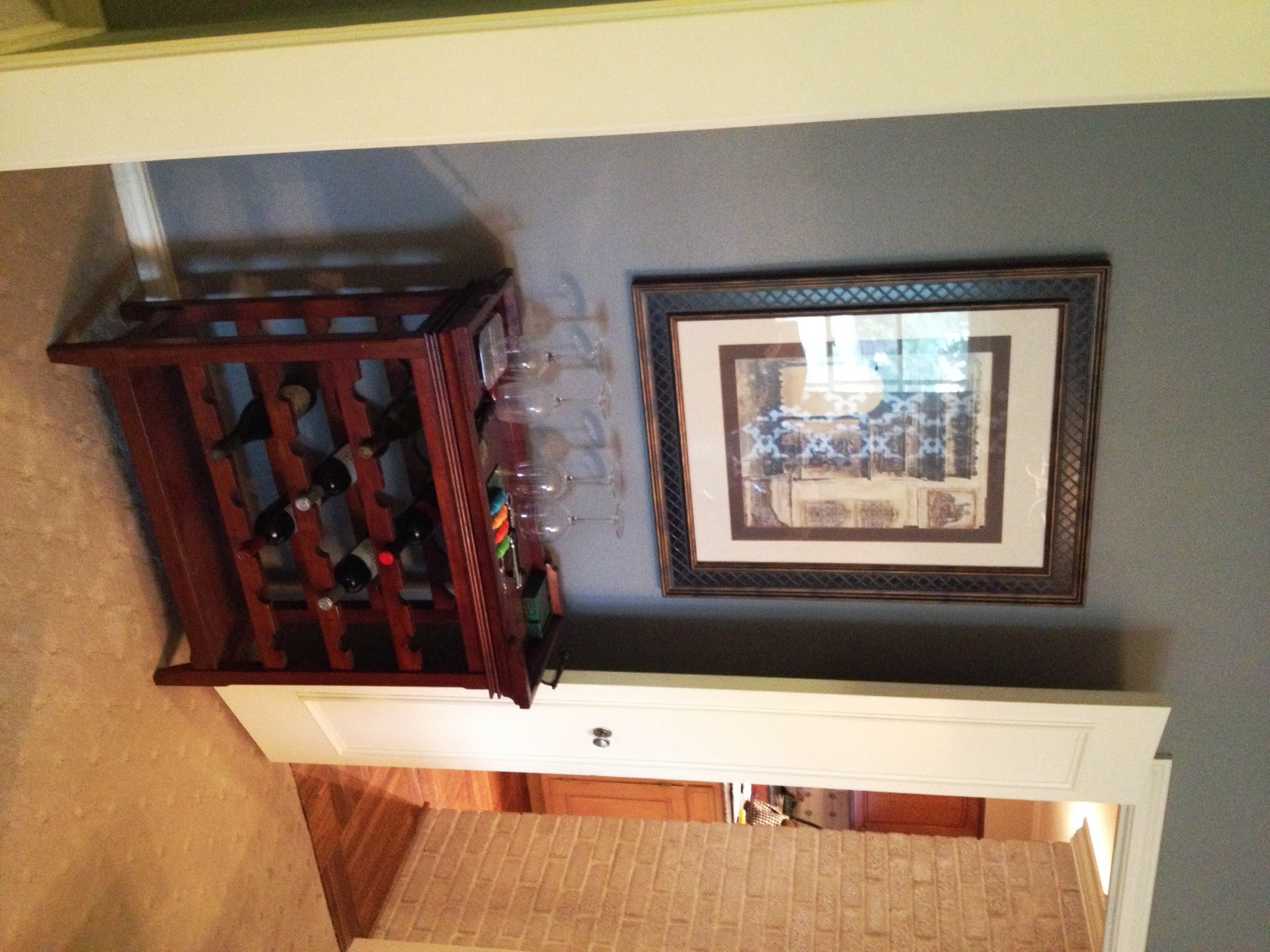 Can you even believe it's the same room?  The coolest part about the table is the fact that it seats 8 as-is, but if you extend out the two leaves, it seats 12!  Perfect for a dinner party or game night or one of my monthly board meetings (that I was too embarrassed to host before now).  Surely this furniture will at least last us 8 years!

*Update: I replaced the large flower painting with more modern pieces from ZGallerie, and switched out the art above the wine rack with another piece I already owned. 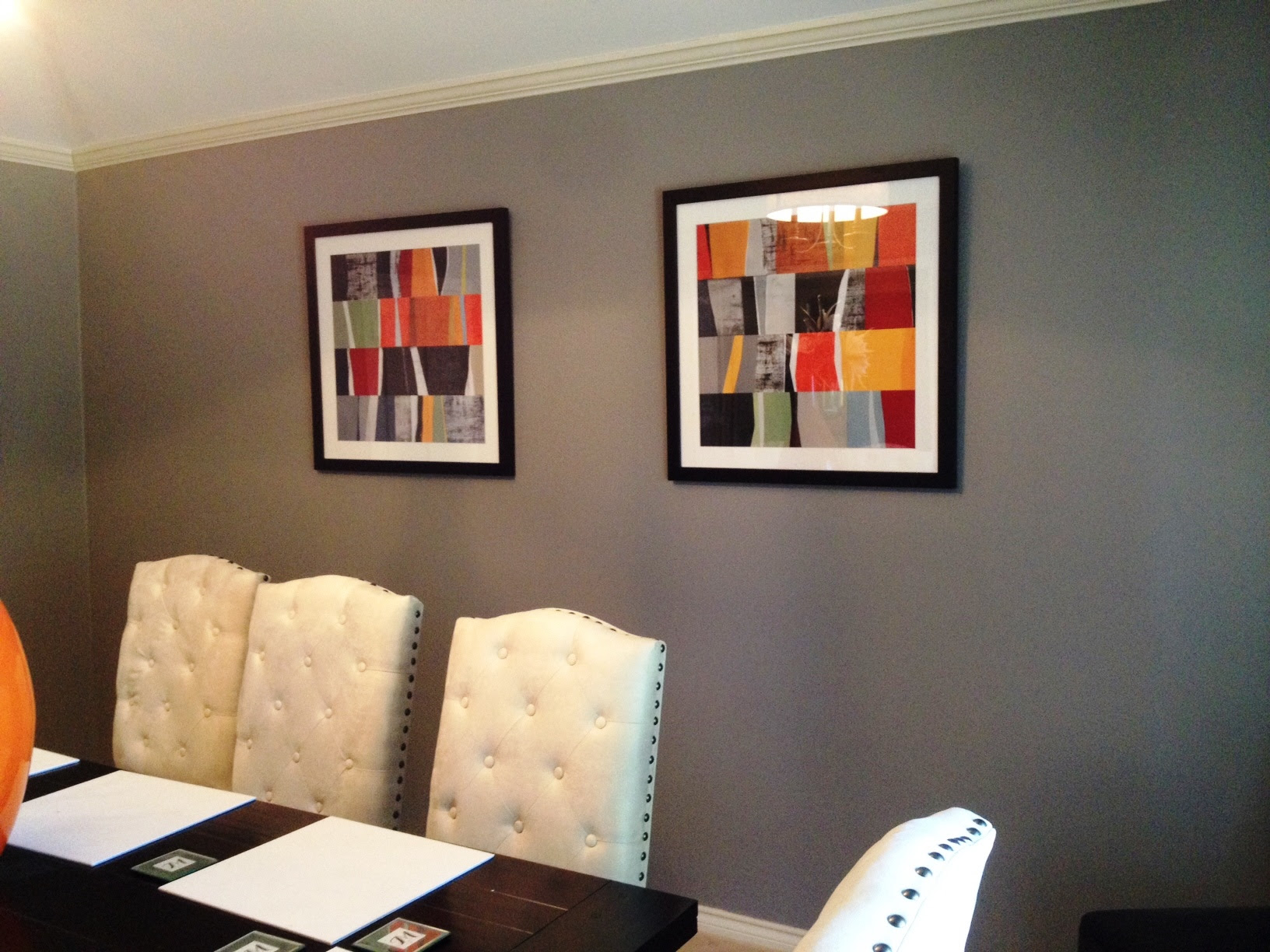 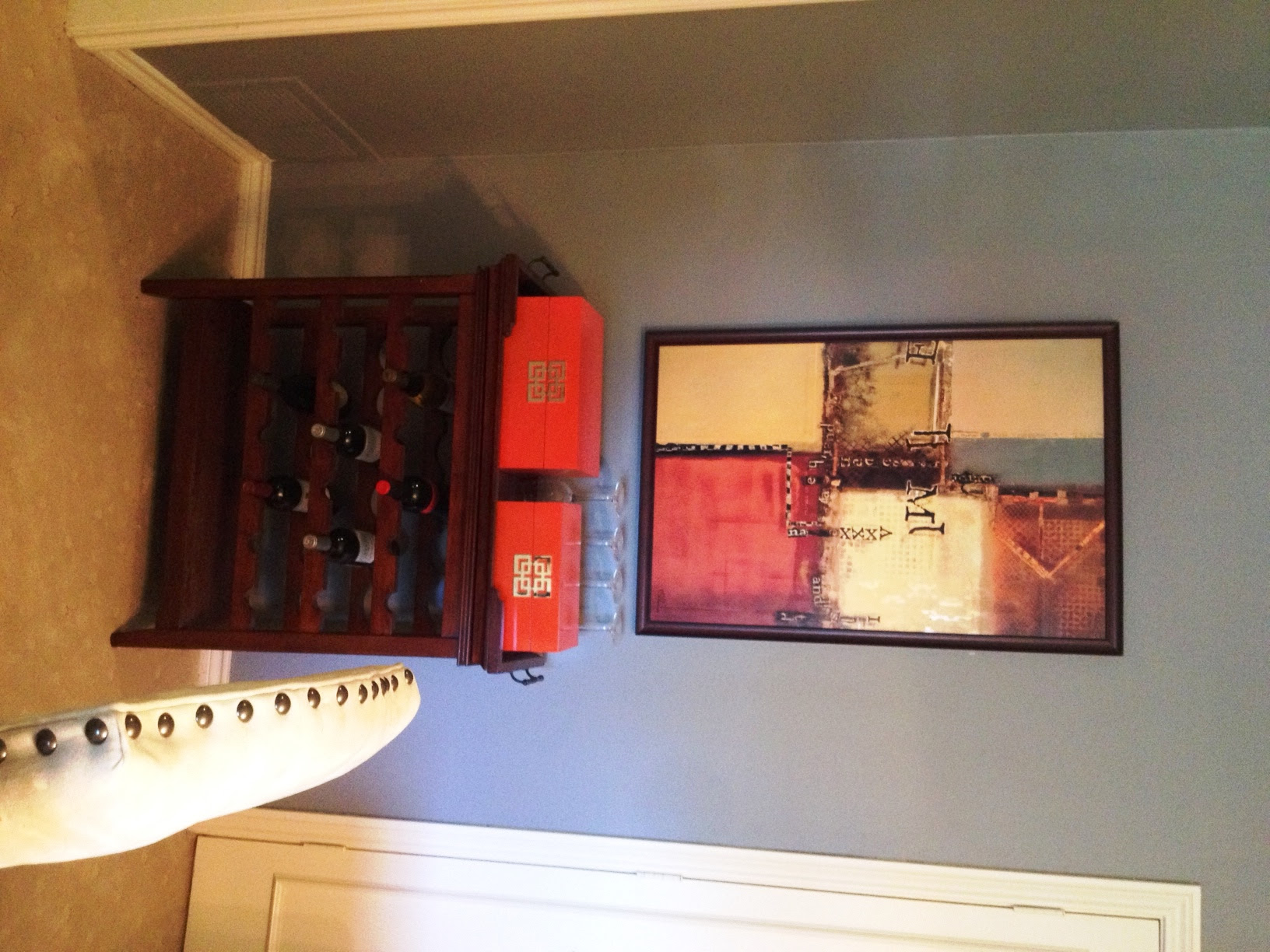 If you couldn't tell from all my previous posts, my house is in a constant state of remodel or repair, or both. The repairs aren't fun to devote posts to, so let's talk about the good stuff! We recently decided that our exterior needed some sprucing up.  I'm not gonna lie; my neighborhood lends itself to giving you a "keeping up with the Joneses" complex.  We were lucky to be able to buy into this area last year when prices were lower, and we found a house that needed work, so we got a good deal.  Little by little, we've been trying to bring the house up to a respectable level on par with other homes in the neighborhood. It's not that I'm jealous of other people's homes nearby; it's more of a realization I've had that my house is a huge investment and I need to take pride in it and give it the money and attention it deserves (to protect that investment).

There were areas of our yard that were missing sod and would turn into mud pits after it rained.  Our trees were very overgrown because they hadn't been trimmed since who knows when.  The flowerbeds around our big front trees were really just dirtbeds.  And, in the front of the house where there is a wide expanse of brick, the previous owners had left a huge flower pot with dead ivy in it.  The exterior just looked tired and unkempt.  Here's what we did:

First up was getting the trees trimmed.  We used our weekly lawn maintenance guy for this part.  David, the owner of DFW Area Lawn Care, is very communicative, reasonably priced, and has always done a good job for us in the past. We saved a couple hundred bucks in this area by timing the work to occur the weekend before bulk trash pick up. That way, the guys could just leave the branches at our house instead of having to haul them off themselves. You just don't even realize how much there is to cut until you see it piled up in front of your house! 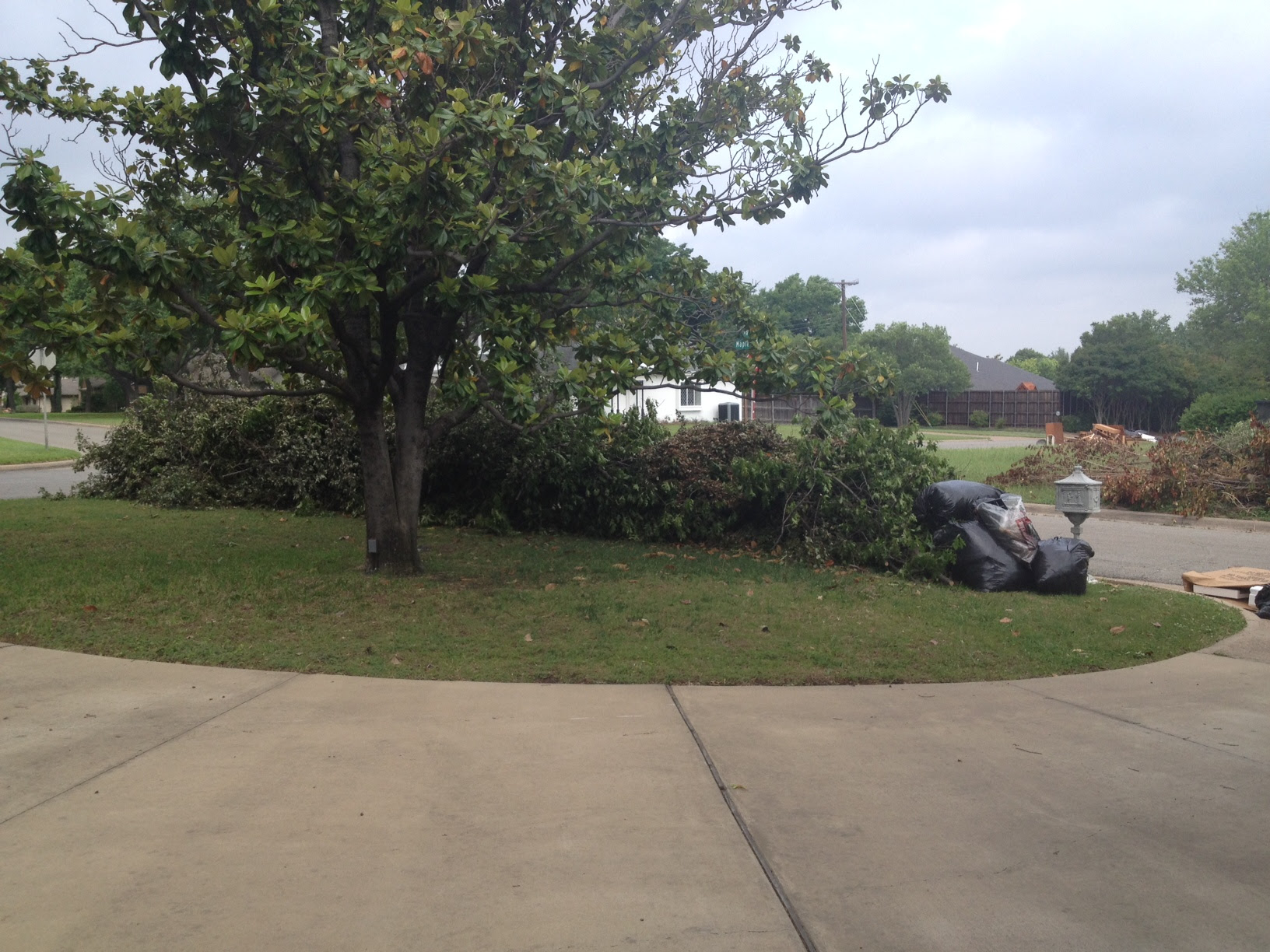 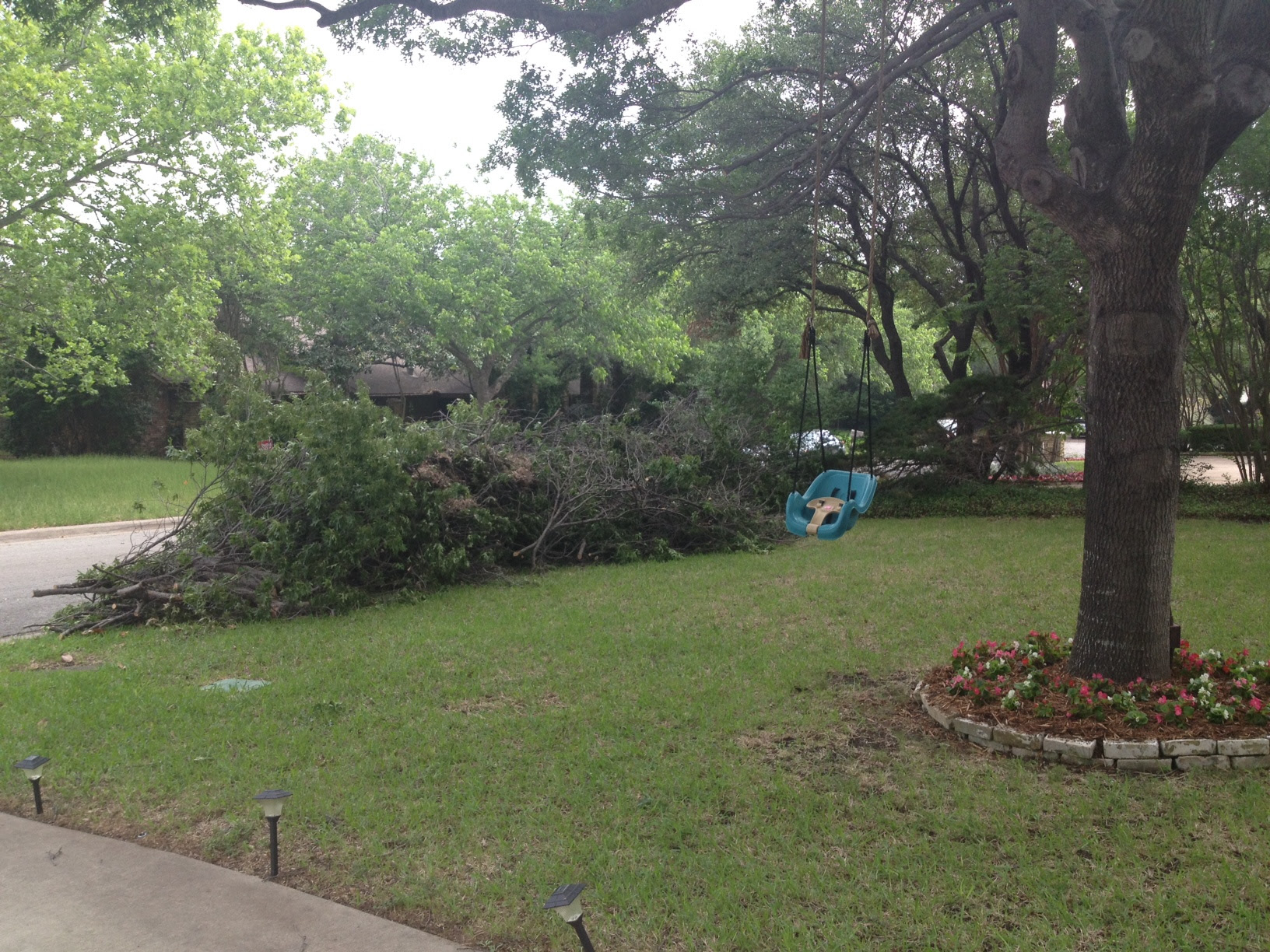 The same crew put down Weed 'n Feed throughout our yard and installed sod where we needed it. 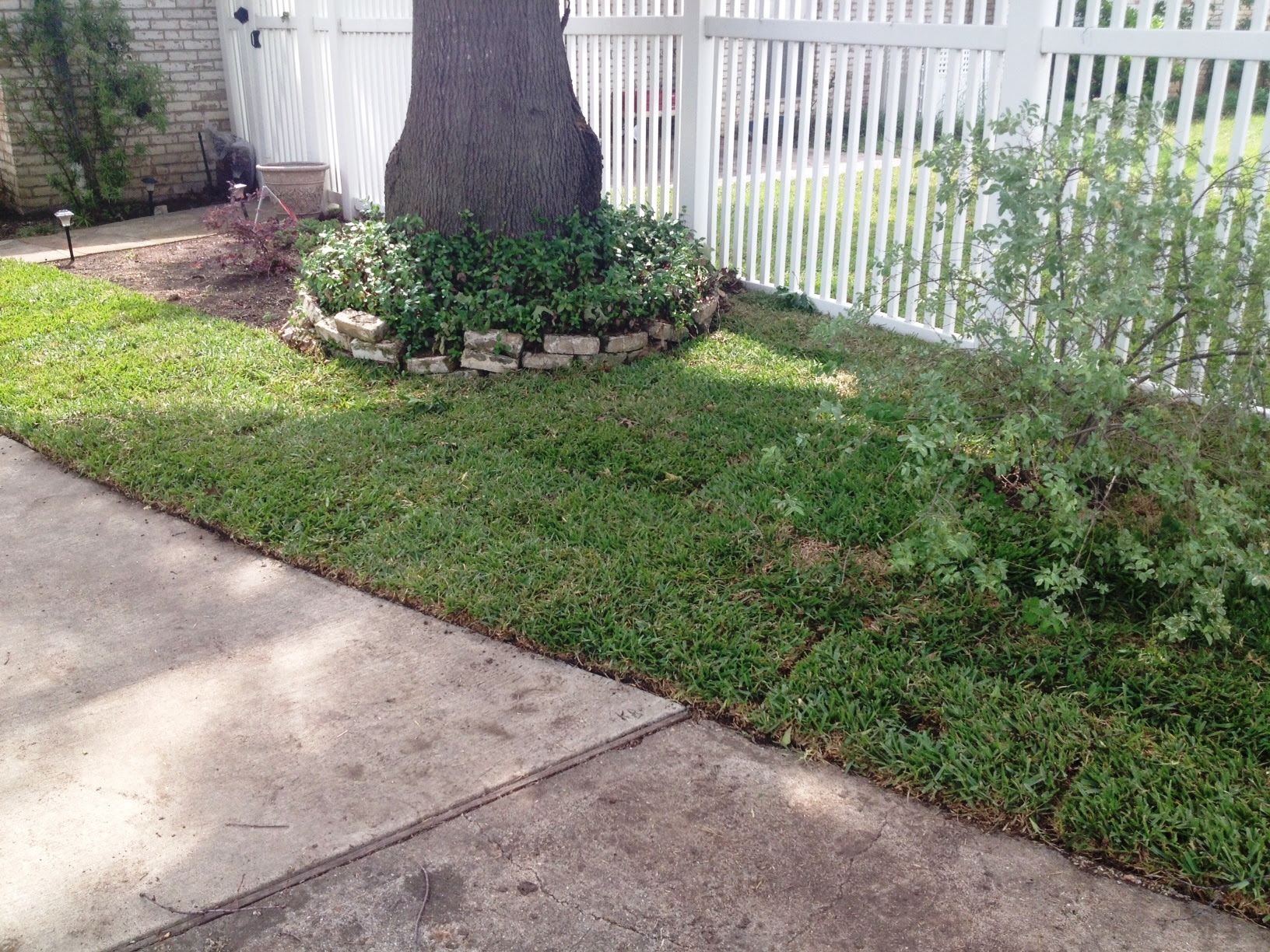 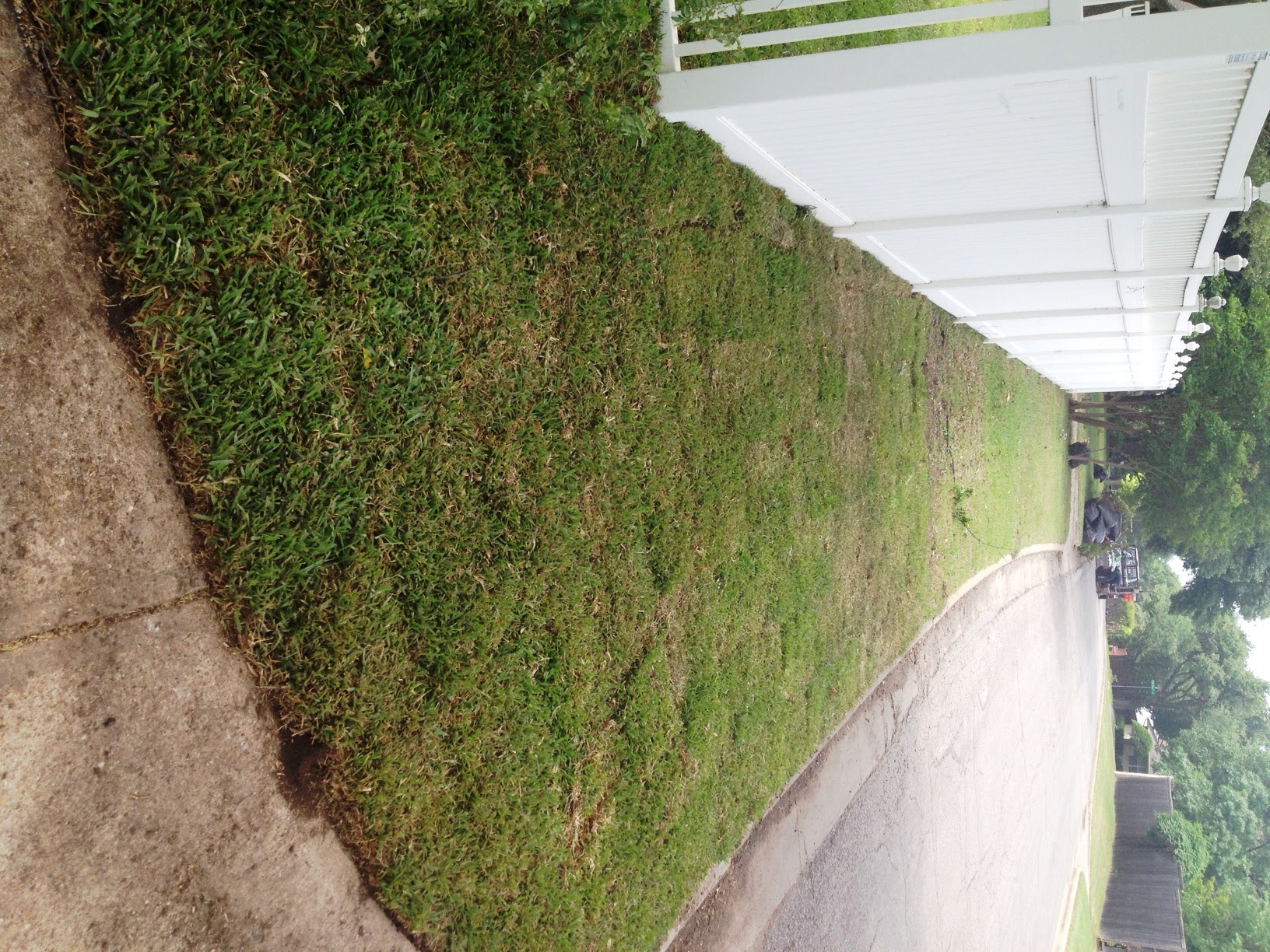 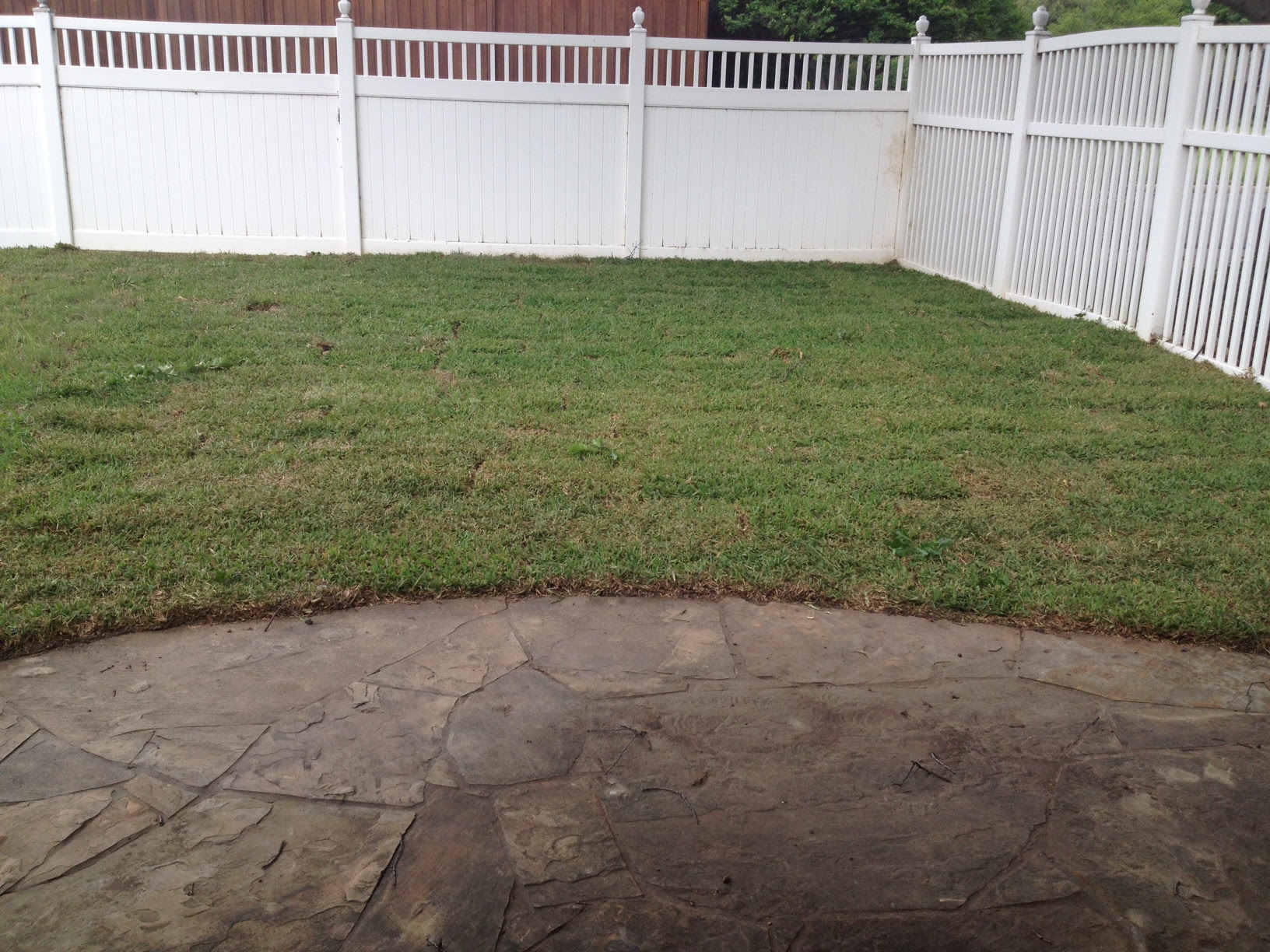 All of these areas had been dirt for the past year, so I barely recognize them now!

We also got the guys to plant flowers around the two big trees in our front yard.  It really is a nice finishing touch and gives it a polished look. 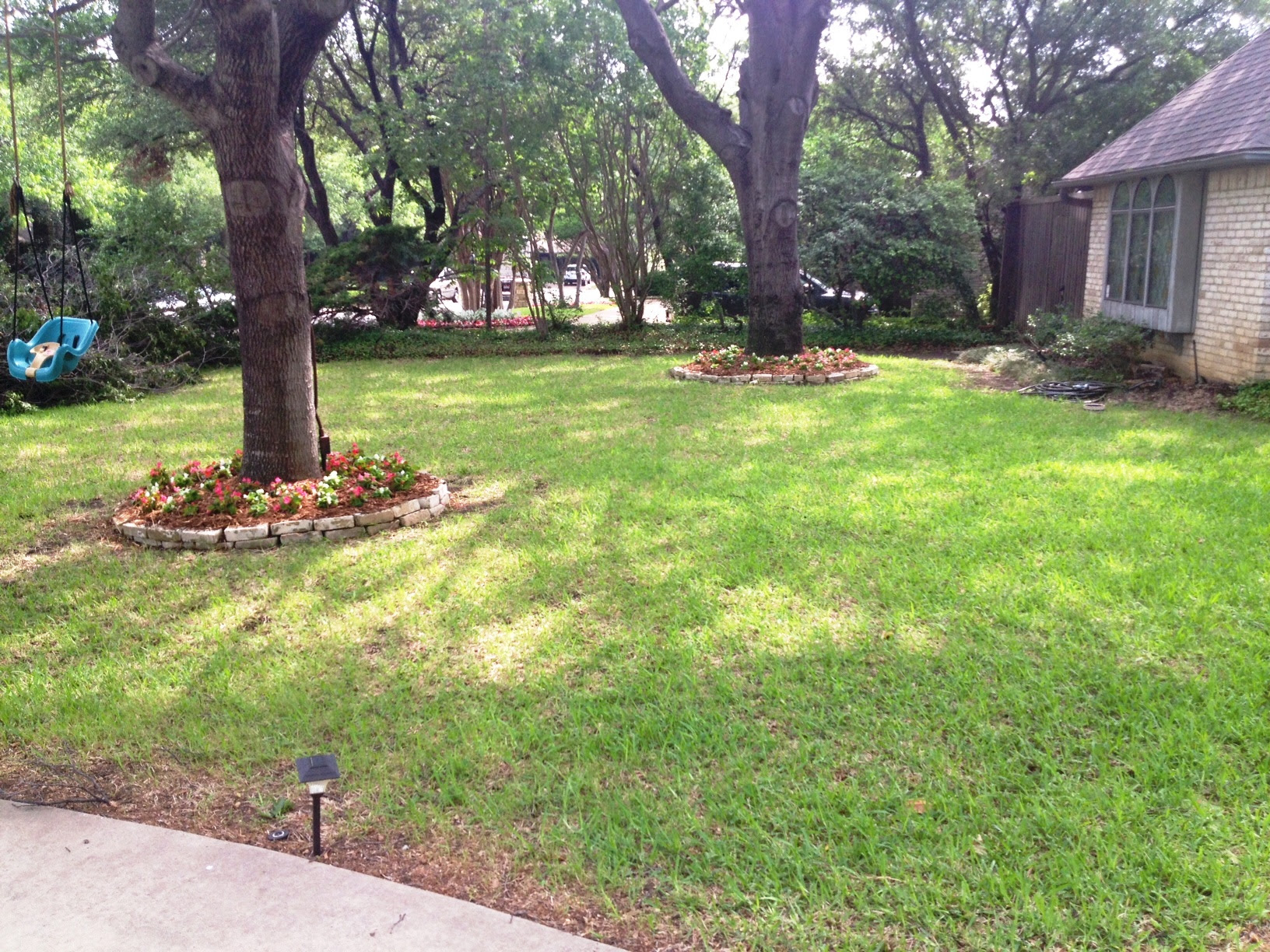 The rest of the work done was accomplished by ourselves. We removed the flower pot and dead vine from the front of the house and replaced it with a charming fountain. 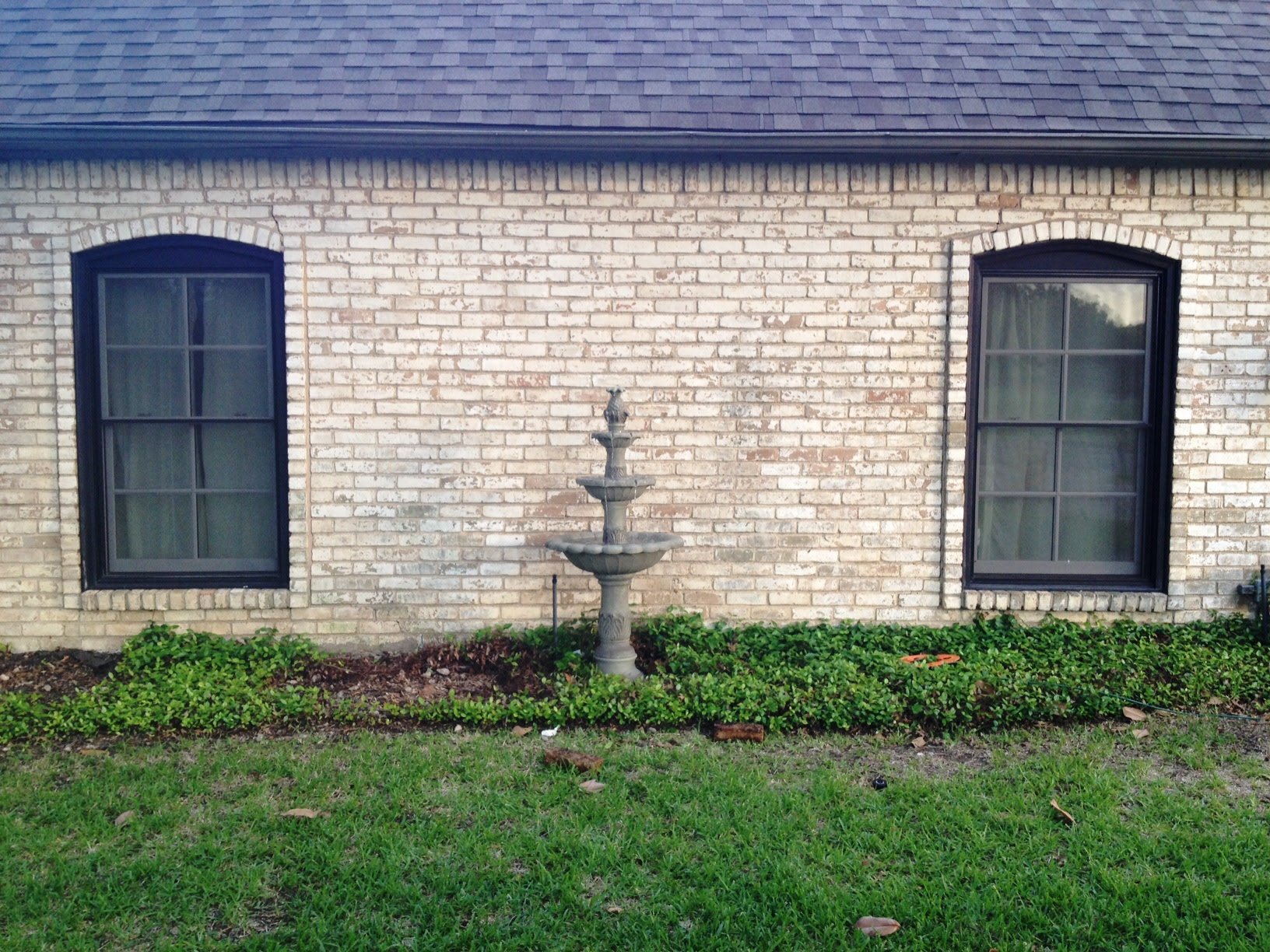 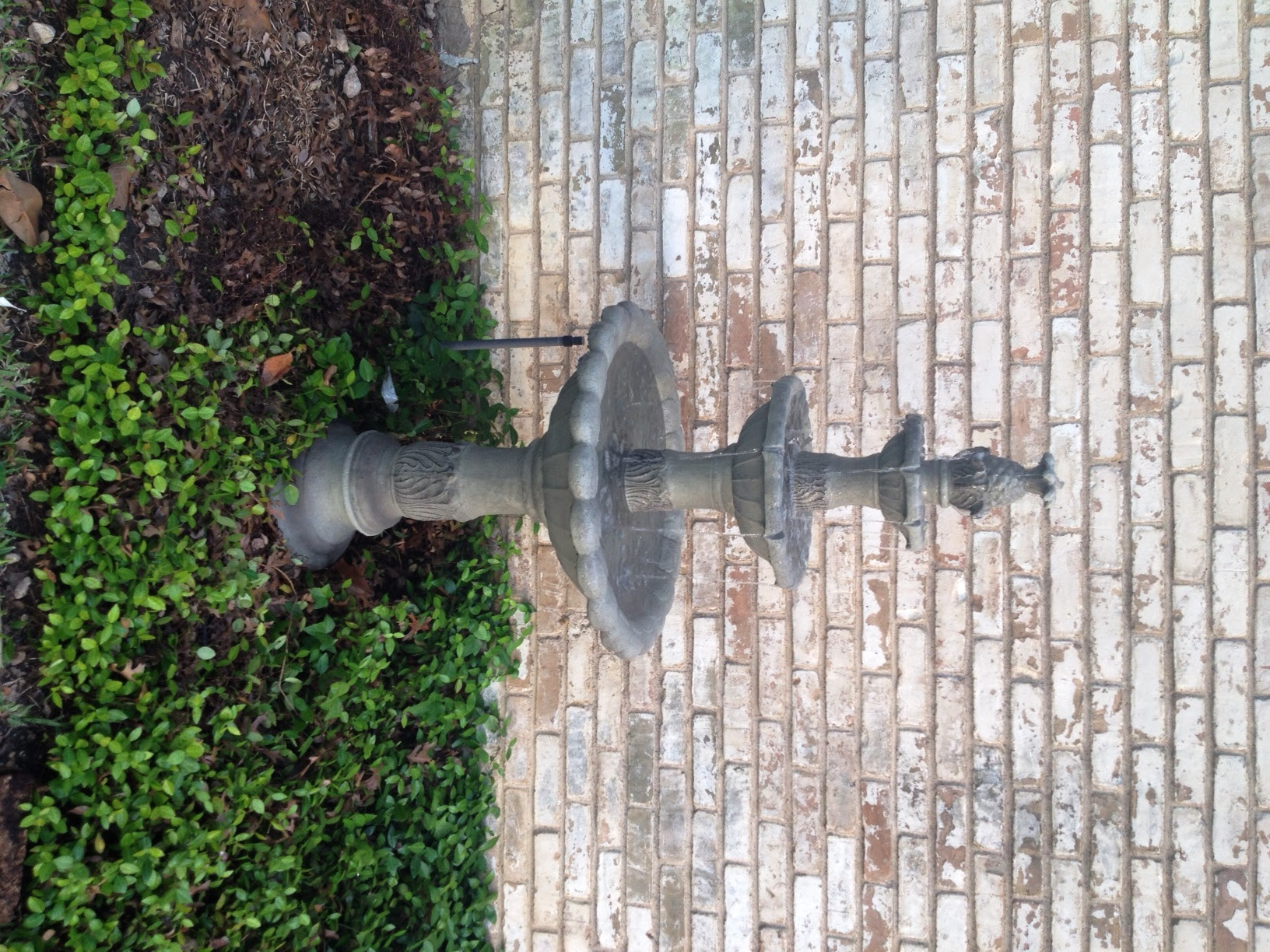 The owners had left a large pot behind, with nothing in it, so I picked out some pretty flowers to fill it with and placed it on our front porch: 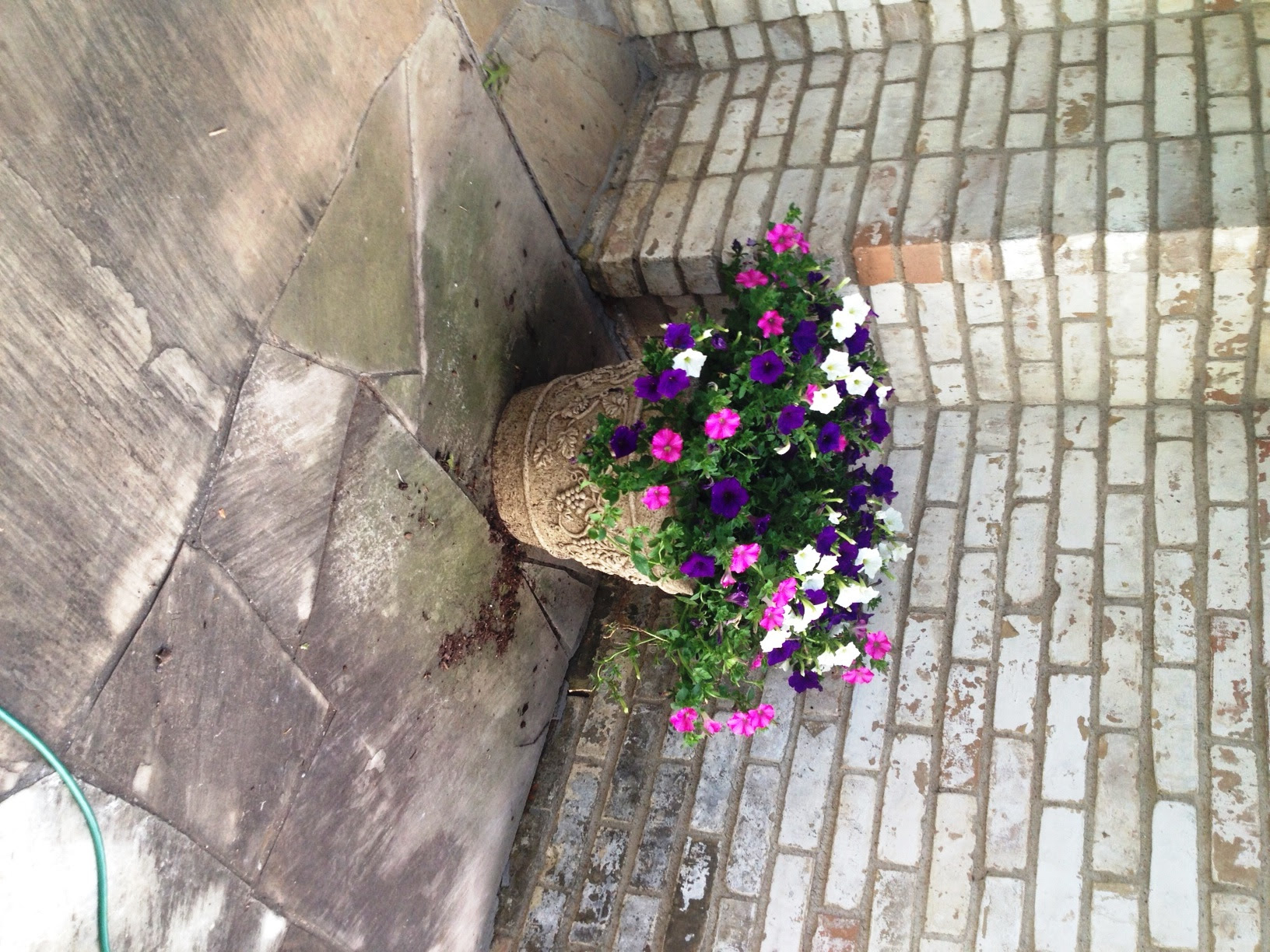 Lastly, there was an area in front of our fence that already had a couple of established plants in it, surrounded by dirt, so we opted not to sod it and instead turned it into a flowerbed.  We added a couple more grasses and mulch. 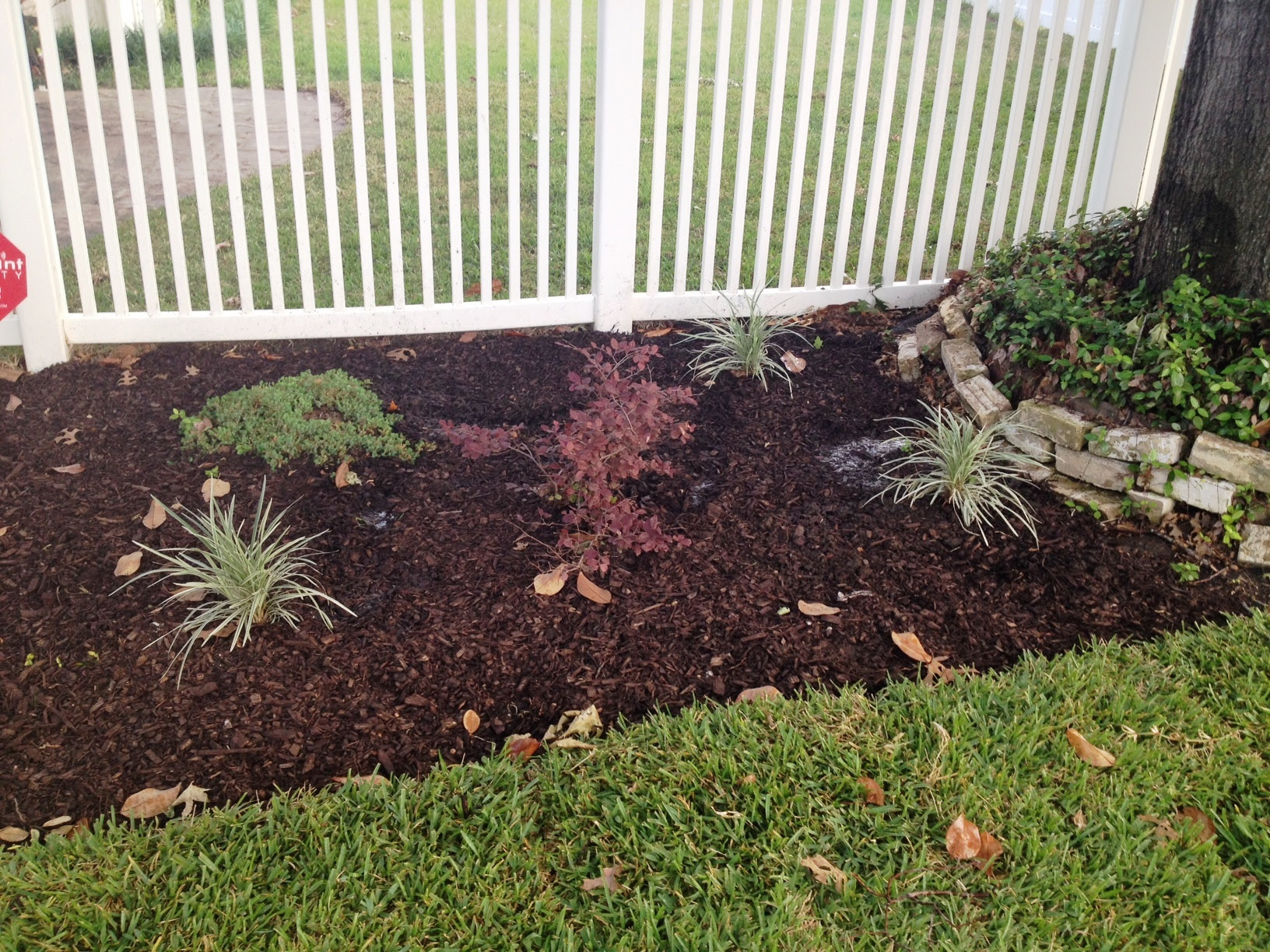 Overall, I am thrilled with how everything has turned out.  I feel a lot of pride when I pull up to my house now, and I think the cost was justified.  Here's the breakdown of what we spent:

Posted by vanweezy at 9:53 PM No comments:

Pools are expensive. I just want to throw that out there, because it's the truth.  On a somewhat related note, we gave our pool area a makeover recently.  The tile around the pool was old, mismatched where previous owners had tried to make repairs, and missing in some spots.  The stone wall around the spa was very dirty, the retaining wall had cracks in it, the mastic around the coping had become loose or broken away in some spots, and the deck-o-seal was lacking in areas. Basically, our pool needed a face lift!

Here are some before pictures: 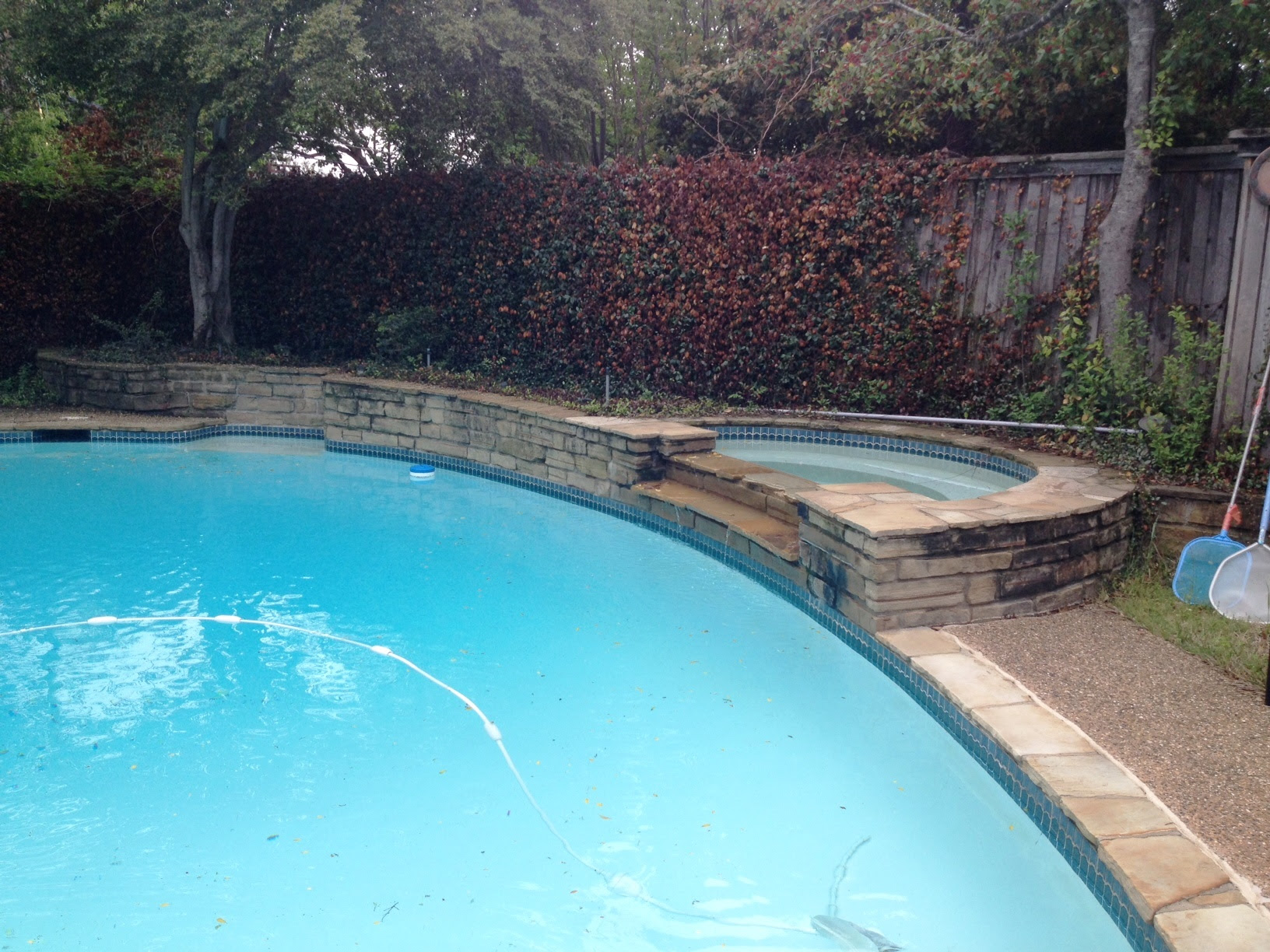 Note how dirty the wall around the spa is! 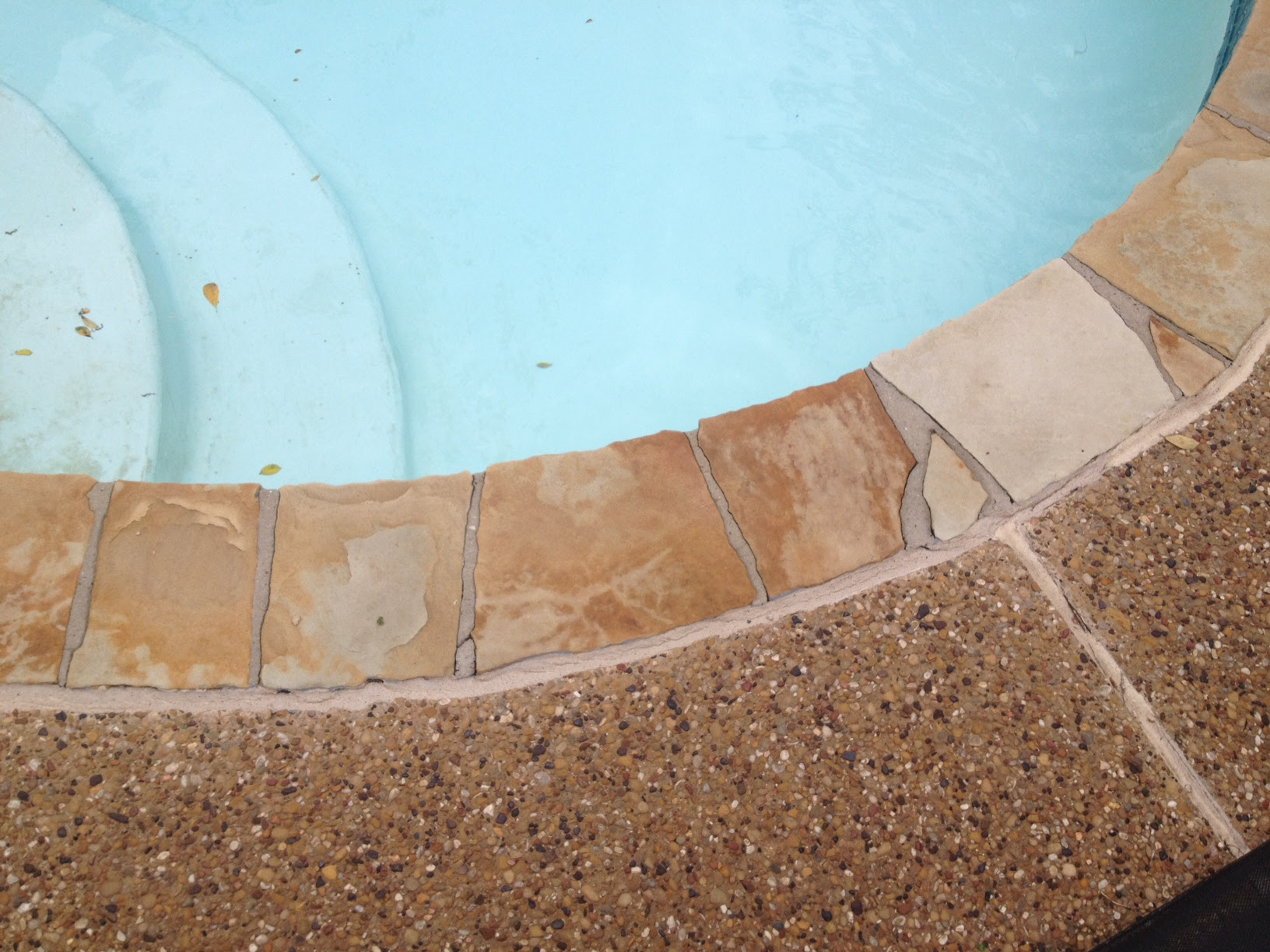 The mastic and deck-o-seal had deteriorated 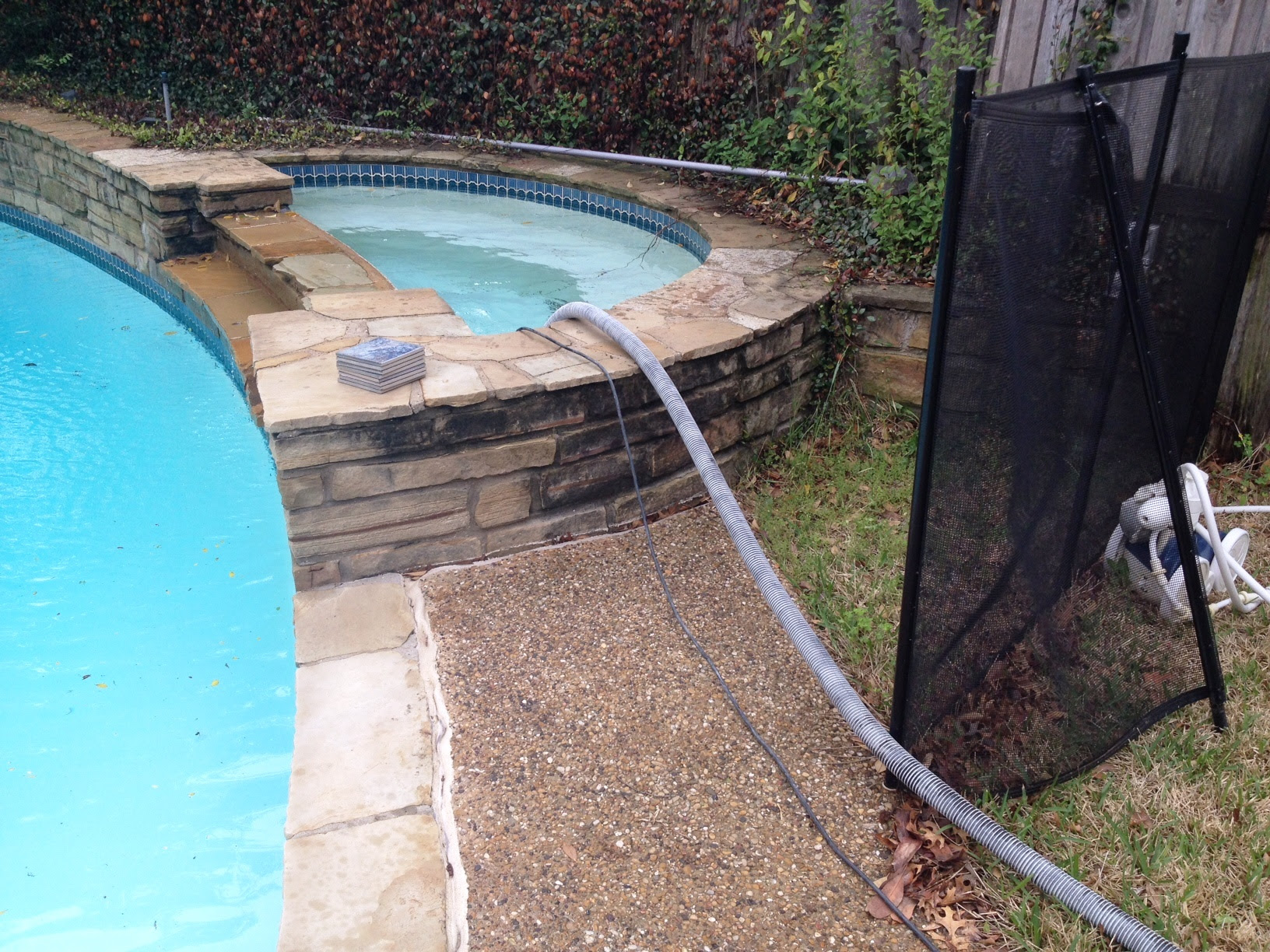 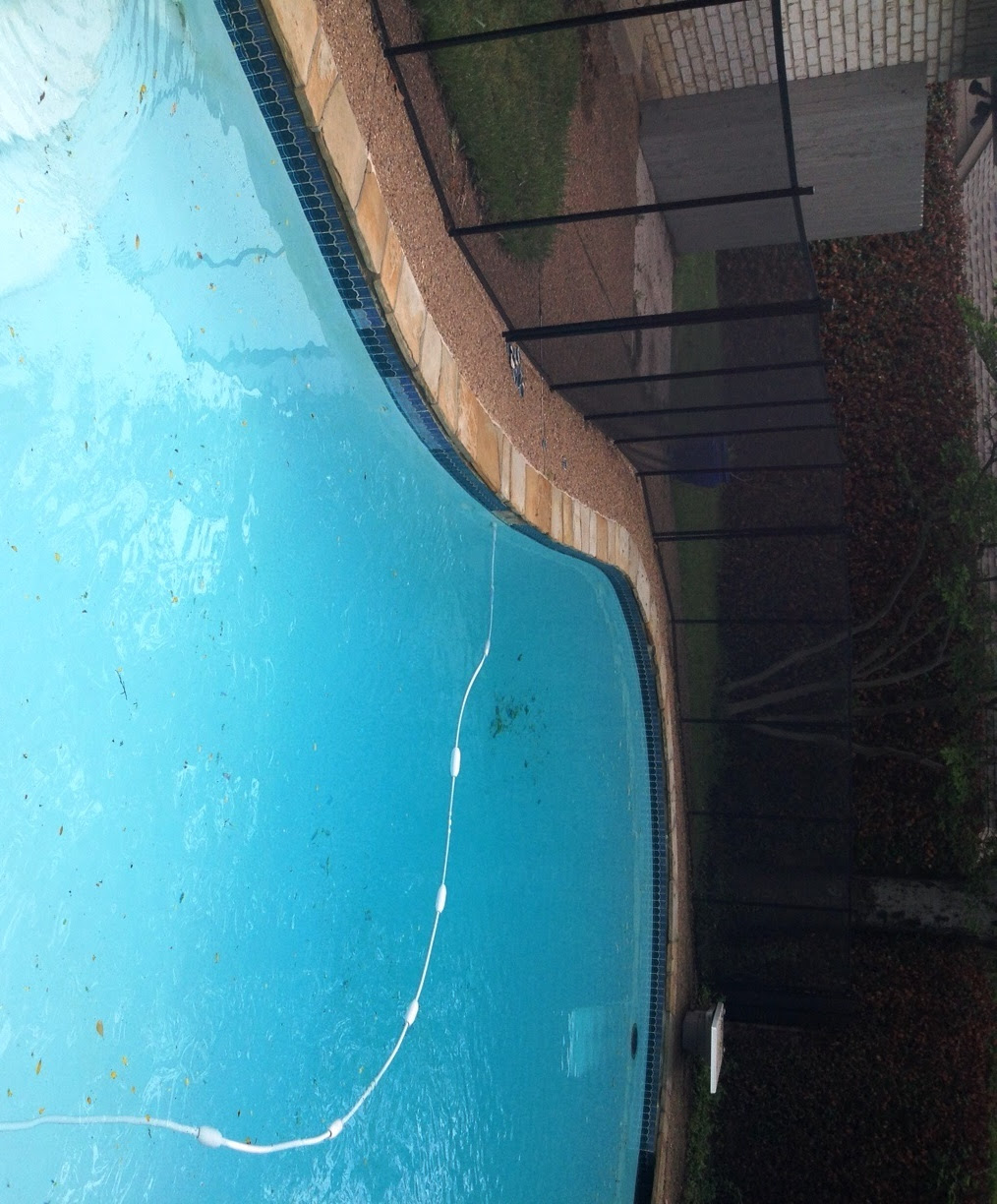 View of the mismatched tile

The entire pool had to be drained so that the work could be completed, and since that process took a long time, I was not looking forward to what the refilling of the pool would be like! 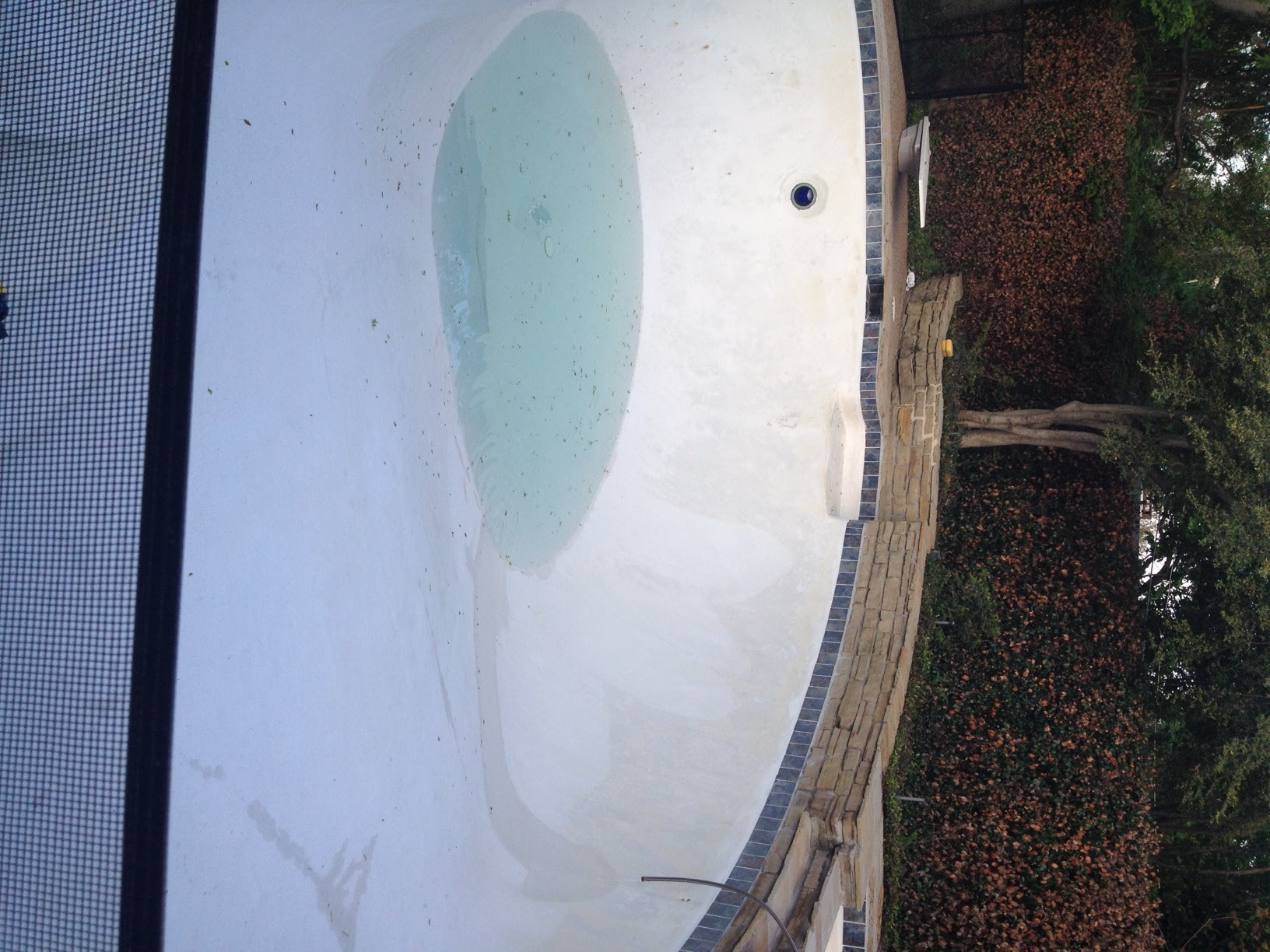 One little hose trying to fill this whole thing up. Ended up being a 65 hour process!  I'm dreading the water bill.

But, here comes the fun part.  The after pictures: 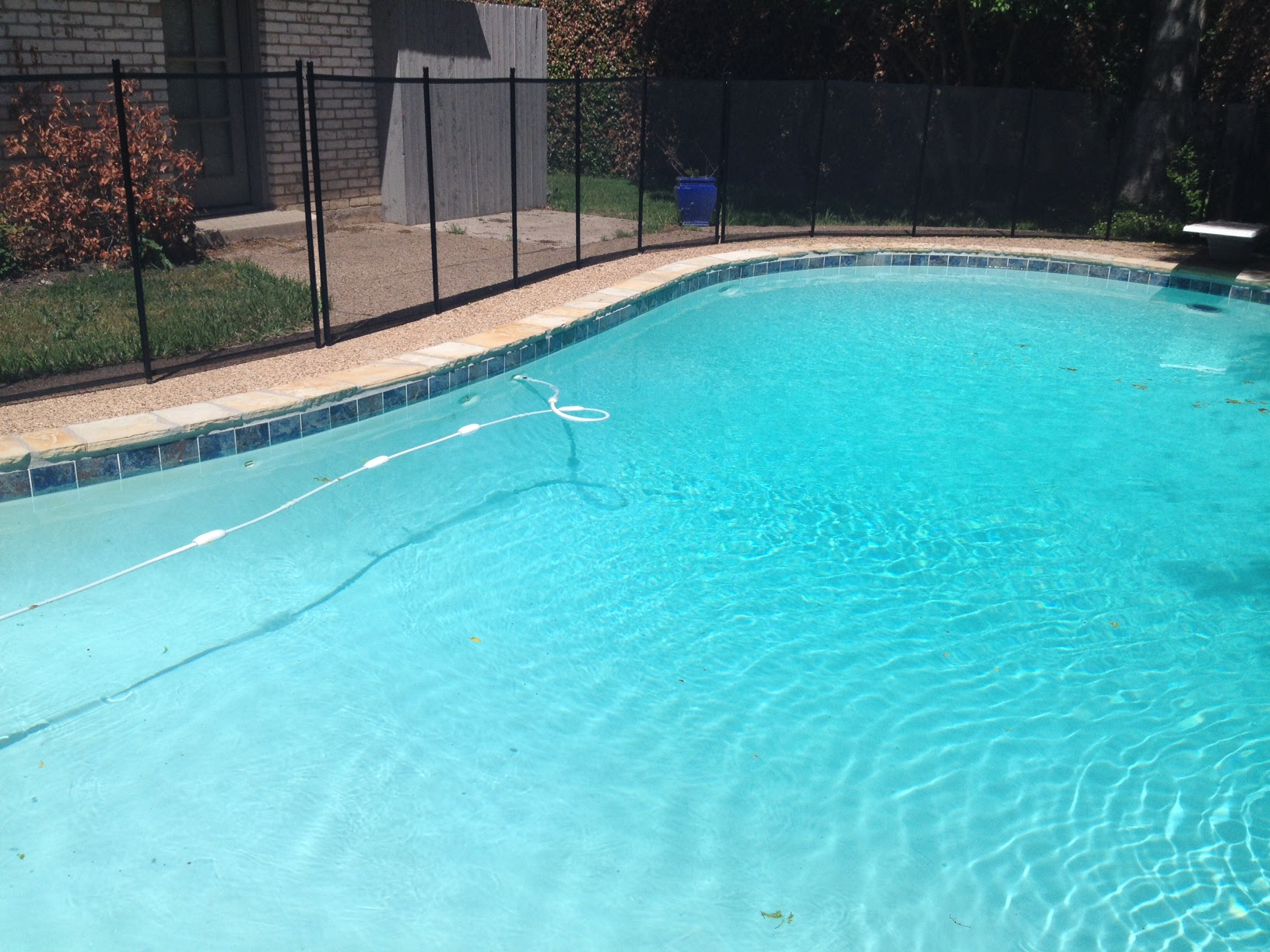 Yay for new tile!  They're larger and more modern. 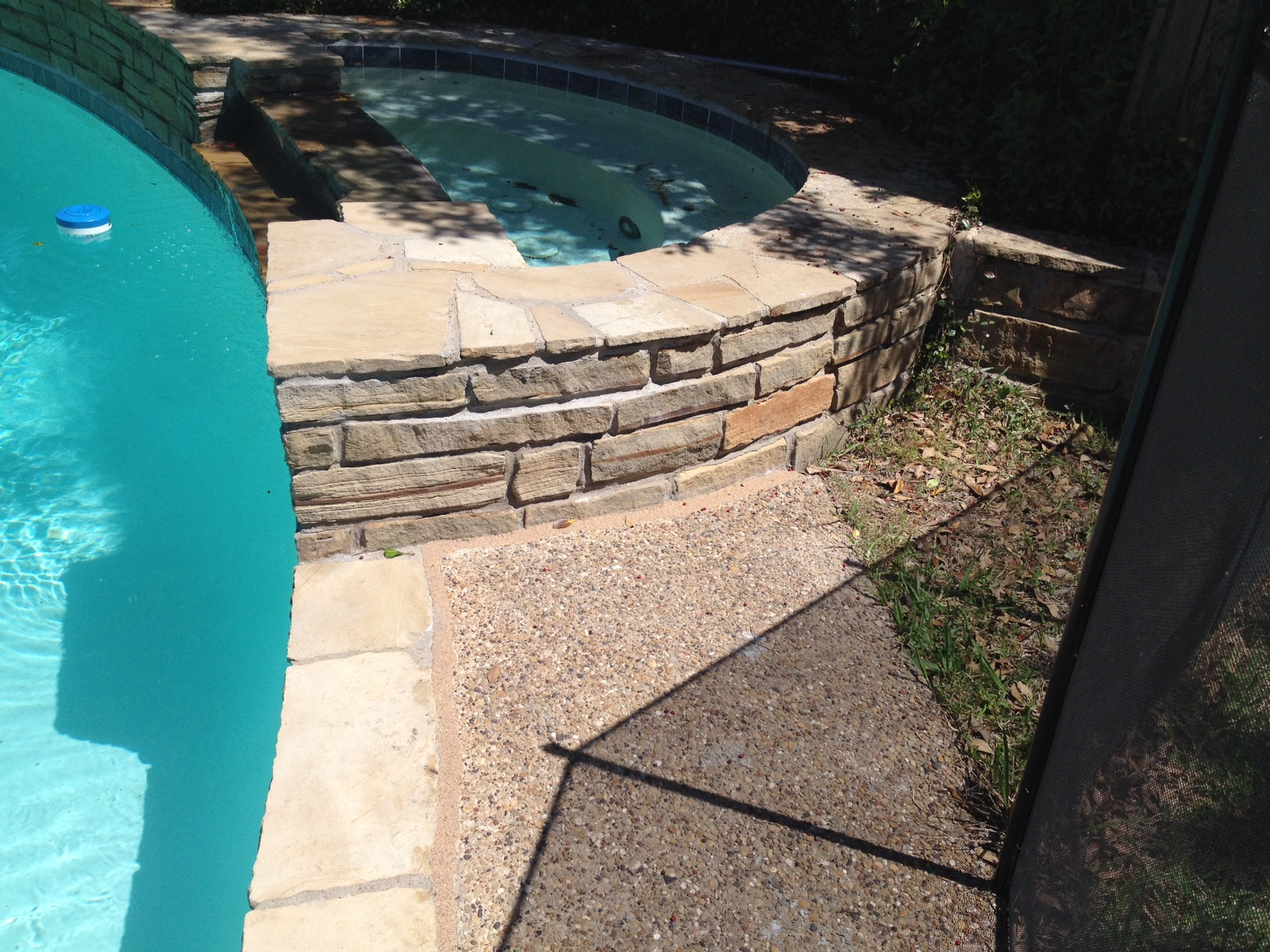 Barely recognize the wall!  Look how nice it's supposed to be! 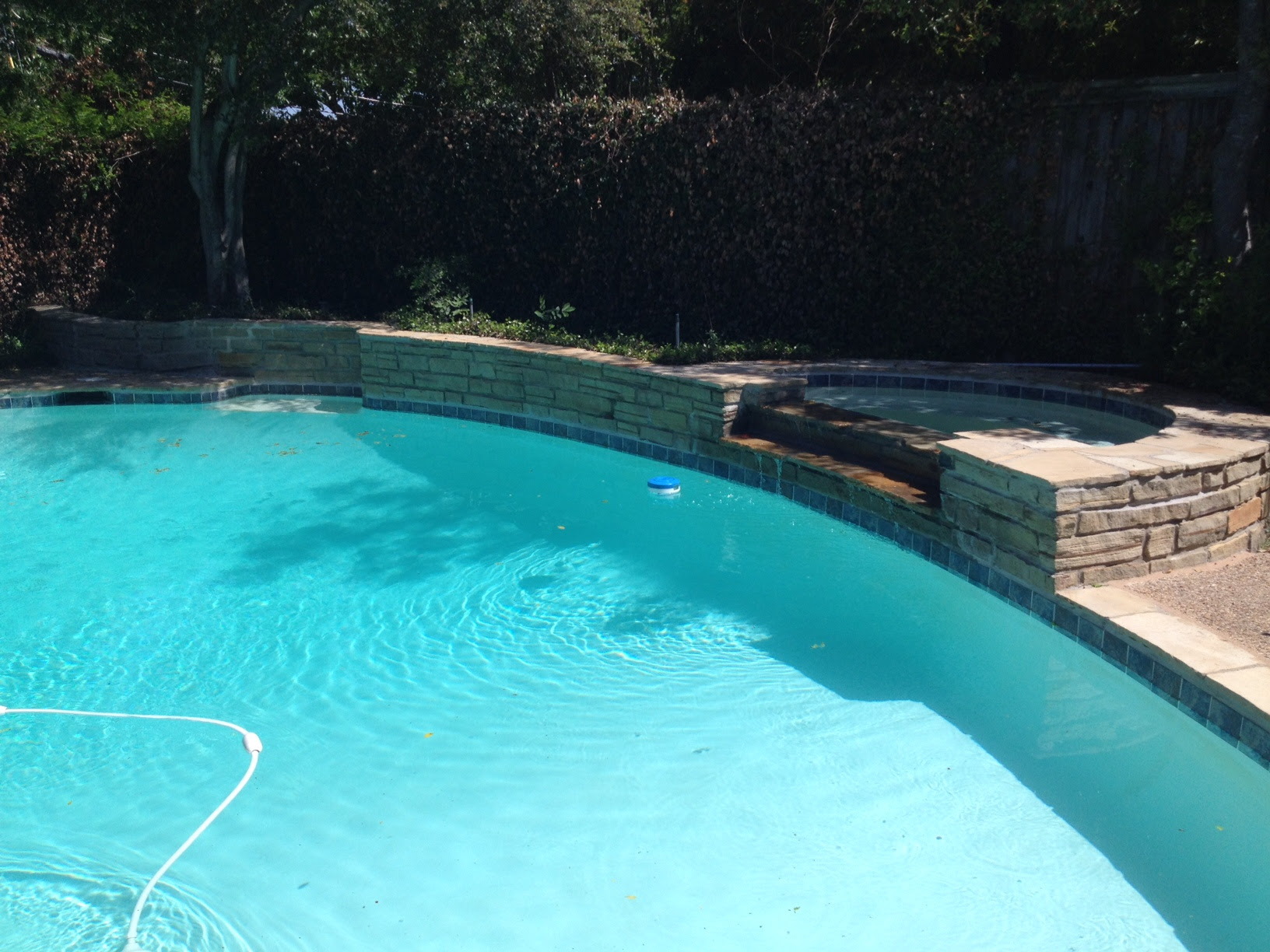 We are very pleased with the results and look forward to consistent warmer temperatures, so we can start enjoying our pool this season!  Might as well get our money's worth.