We took another trip to Vegas this past weekend, but this time we invited my parents along. We stayed in a 2 room Siena suite at the Palazzo. I love this hotel, and not just because they always give me free rooms and free show tickets. (But that does help). This was the first time I've walked up to my suite and had double doors! Haha. Fancy, schmancy indeed!

On Saturday, my mom and I attended the Price is Right Live Stage Show. Our seats were front row, directly beside the stairs where people climbed up onto the stage. That was neat being so close to the action! The show was very entertaining and some contestants actually won prizes. 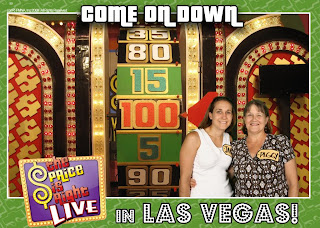 On Saturday night, Jer and I watched Phantom at the Venetian. Some parts of the play were slow, but the scenery and special effects were superb. I'm still amazed at what they were able to achieve on a live stage. The effects surrounding the massive chandelier drop, in particular, were truly exciting.

We spent Sunday doing a little relaxing and some gambling. On Monday we did more touristy stuff, visiting other casinos and walking along the strip. It was a fun weekend! 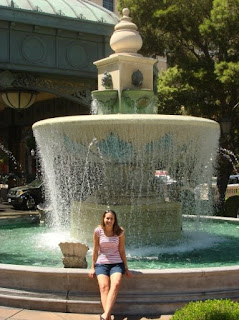 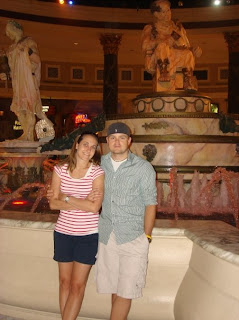 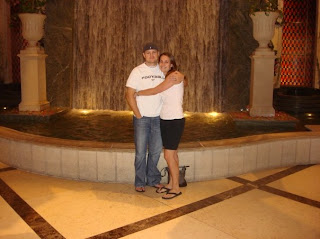 Posted by vanweezy at 5:00 PM No comments:

What are your expectations?

If you've got children, especially older children, then this post won't mean much to you. However, if you are child-less like me, then you've probably never considered these questions. As part of our preparation for hosting a foreign exchange student, we were asked to fill out an Expectations worksheet. After reading through the whole thing, I’ve come to the conclusion that either 1) We are incredibly laid-back people or 2) Normal host parents are somewhat uptight. Or maybe it’s both. Or maybe something in-between! I’d like you to ponder how you would answer the following questions:

1) What chores are students expected to do?
2) Does student need permission to stay after school?
3) Is there a curfew?
4) Who pays for the student when the family goes out to dinner?
5) Who pays for the student for school activities and sports, when there is a fee?
6) Is the student allowed to have friends visit the home?
7) Will the student be expected to participate in the family's holiday plans?
8) Who sets table, clears table, does dishes, cooks, meals?
9) Are there set days when laundry is to be done?
10) What are the appropriate times for phone calls?
11) Is there a time limit on the computer?
12) Can the student put pictures on their wall?
13) Is there a limit on showers?
Posted by vanweezy at 2:26 PM No comments:

It's a Small World!

We received an email today from our German foreign exchange student's parents. It was very nice to make contact with them for the first time! They expressed how pleased they were with the fact that Jeremiah and I would be hosting their daughter for a semester in America. They sent us a couple of pictures of their family. One of them was from a trip they took to a beach in Holland. I wrote back and told them how neat it was to see a picture from Holland since that's where my dad was born. After a few more exchanges, we discovered that our student's mom was born in a town (Geleen) just 20 miles from where my dad was born (Maastricht) in Holland. How neat is that? She still has family in Geleen, and my dad believes we do as well. I can't wait to learn more about their family, and welcome their daughter into ours. It is, indeed, a small world.
Posted by vanweezy at 5:09 PM 1 comment:

We are ready to divulge our charitable pursuit for the month of July. (It actually covers the entire rest of the year, but the process started in July!) Jeremiah and I have decided to support Academic Year in America (AYA). AYA is a program of the American Institute For Foreign Study Foundation. It is one of the largest and most respected high school exchange programs in the United States. In case you haven't guessed already, we aren't supporting AYA financially. We have decided to host a foreign exchange student in our home this year!

We have filled out the host application, had our in-home visit with the local coordinator, and selected a student. The only remaining steps are a background check and a reference check. I don't foresee any problems there, so we should be good to go! We'll have an orientation in the coming weeks, and then our student will arrive mid-August. We selected a 17 year old girl from Germany. She will attend high school here and live with us for the fall semester. We'll be responsible for room and board and act as her family for a few months. It's going to require a substantial time and monetary commitment on our part, but I think it will be worth it.

I'm very, very excited at the opportunity to introduce someone to America, as well as learn some things about Germany at the same time. It should be an awesome learning experience for all of us. I look forward to providing more details as they become available, and I can't wait to meet our student!

If you have any interest in hosting a foreign exchange student, please visit AYA's website and request information. They still have students that need placement for the coming year.
Posted by vanweezy at 10:48 PM No comments:

If you've never watched an episode of The Daily Show, you are missing out. Jon Stewart is an incredibly funny, witty broadcaster. He has very intriguing guests on his show, and isn't afraid to ask them tough questions. (If you don't believe me, just get up to speed on the Jim Cramer interviews). He's also not afraid to poke fun at the stupid things going on in the world. If this is where your cynical side comes out ("He's such a Liberal and all he does is make fun of Bush") - you're wrong. He is equally critical of anything and everything, if the situation calls for it. Still don't believe me? Watch this clip. It's well worth 5 minutes of your time.

The initial motivation behind writing this post came after reading an interview he did with Sojourner's Magazine. The transcript can be found here. Here are some of my favorite excerpts from that interview:

"One of the things that’s very important to everybody here is to write jokes about the subjects you actually care about, because it makes going to work worthwhile....there are very strong emotions that fuel the comedy for us, and that’s what makes it exciting for us—and hopefully makes it interesting for the audience."

"Religion makes sense to me. I have trouble with dogma more than I have trouble with religion. I think the best thing religion does is give people a sense of place, purpose, and compassion. My quibble with it is when it’s described as the only way to have those things instilled. You can be moral and not be religious, you can be compassionate, you can be empathetic—you can have all those wonderful qualities. When it begins to be judged as purely based on religion, then you’re suggesting a world where Star Jones goes to heaven but Gandhi doesn’t."

"Like anything else that’s that powerful—that is touching that deep into the epicenter of the human psyche and our fears, it can be misused. I’m probably much more responsive in a bad way to dogma and to extremism than to religion. When people say things like, “I found God and that helped me stop drinking,” I say, “Great! More power to you. Just know that some people stop drinking without it.” It’s when it gets into the realm of “This is the only way to salvation”—that’s when I think, “Okay, now we’re getting into a problem.”"

All in all I think Jon Stewart is a very insightful, intelligent person who has found a way to get me interested in politics, and national and world-wide issues. If you can educate me and make me laugh at the same time, then you're pretty kick-ass. Just sayin'.
Posted by vanweezy at 4:04 PM No comments: