For my mom's most recent birthday, she told her daughters that she wanted us to take a trip together. After brainstorming locations and dates, we decided on Washington DC in early April. We've all been there before, but never all together and for some of us it had been many, many years. We booked our flights and an airbnb and eagerly anticipated our trip!

We arrived late on a Wednesday night and took a car service to our airbnb near Swann St and 15th, not far from Dupont Circle. The house was super cute and had plenty of room for the four of us and worked out to be a much better deal than a hotel.  Having two full bedrooms and bathrooms is a must for this many women! It was also helpful to have a full kitchen and living area so we could spread out. The only downside was the quantity of stairs in the house! It was one of those row houses with different occupants on different levels, so as soon as you walked in the front door, you went up one staircase, followed by a landing, followed by another staircase. That got you to the main level where the dining, kitchen, and living rooms were. From there, there was another staircase that took you up to the bedrooms and bathrooms. We got a workout, that's for sure! 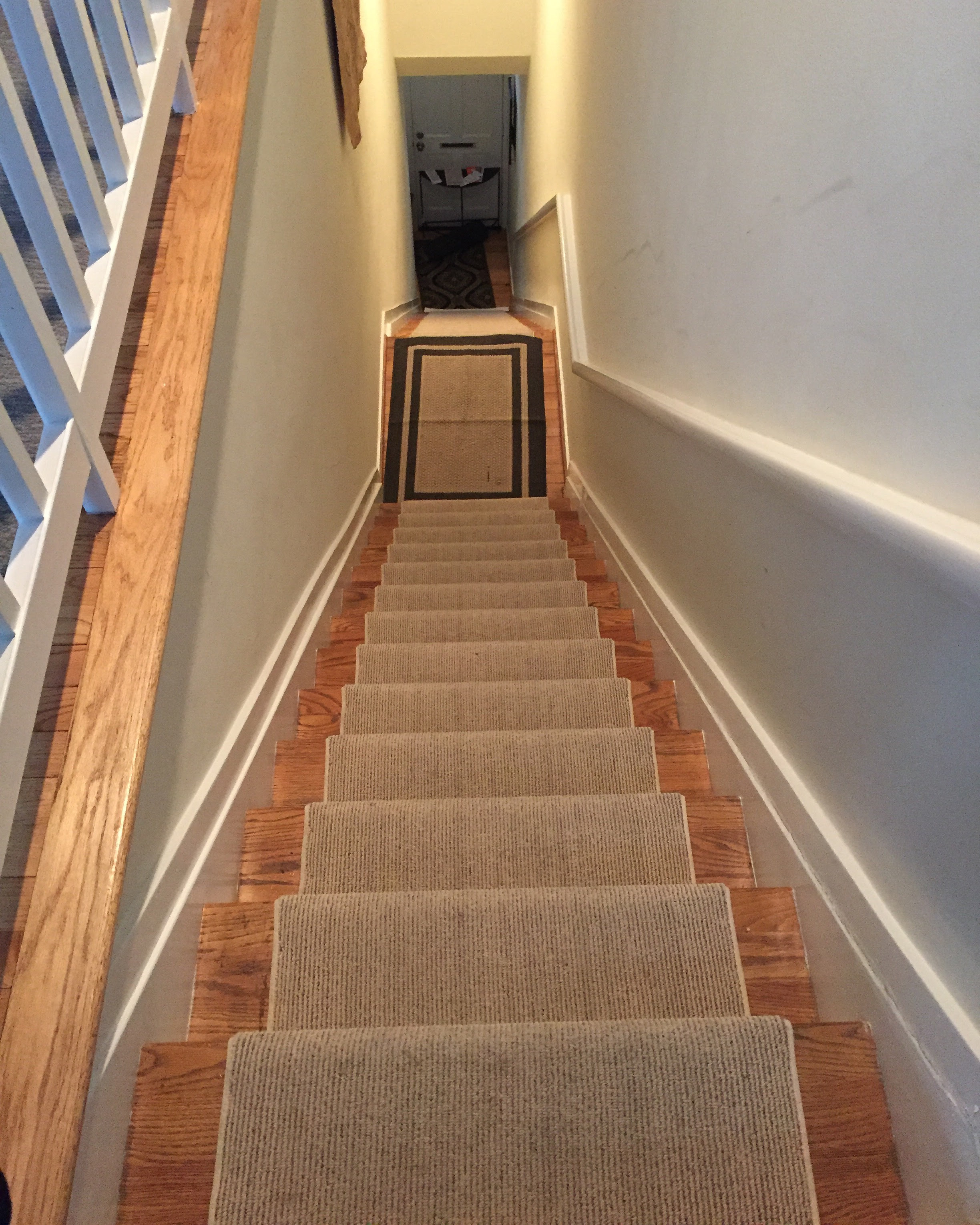 View from main level looking down towards front door

There wasn't much touristy stuff we could do that first night because of the late hour, but we didn't want to waste any time in DC, so we headed out for a late snack. We visited Amsterdam Falafelshop because we'll never pass up something that gives a shout out to our Dutch heritage! Food was delicious and I just read that they're bringing a location to Dallas. Yay! After getting our fill we headed back to our house to play some Dutch Blitz.

On Thursday, we started our adventure by visiting the National Law Enforcement Officers Memorial. It pays homage to law enforcement officers who have lost their lives in the line of duty. With my sister being a former LEO, and her husband still working in that field, it had special meaning to her. "It is not how these officers died that made them heroes; it is how they lived"

From there, we went to the National Archives. We spent a while going through the exhibits and attempted to see the Declaration of Independence and Constitution, but the lines to see those were excessively long!  Lots of school groups were there that day, so we had to skip that part. After the museum portion, we went to the actual research area so we could find the microfilm that housed my grandparents' immigration record. We had to register as researchers and go through a small orientation, then we located the cabinet with the correct microfilm reel. After a few minutes of searching, I located the manifest. I've seen it before through Ancestry.com, but it was cool to find it in the actual National Archives ourselves. 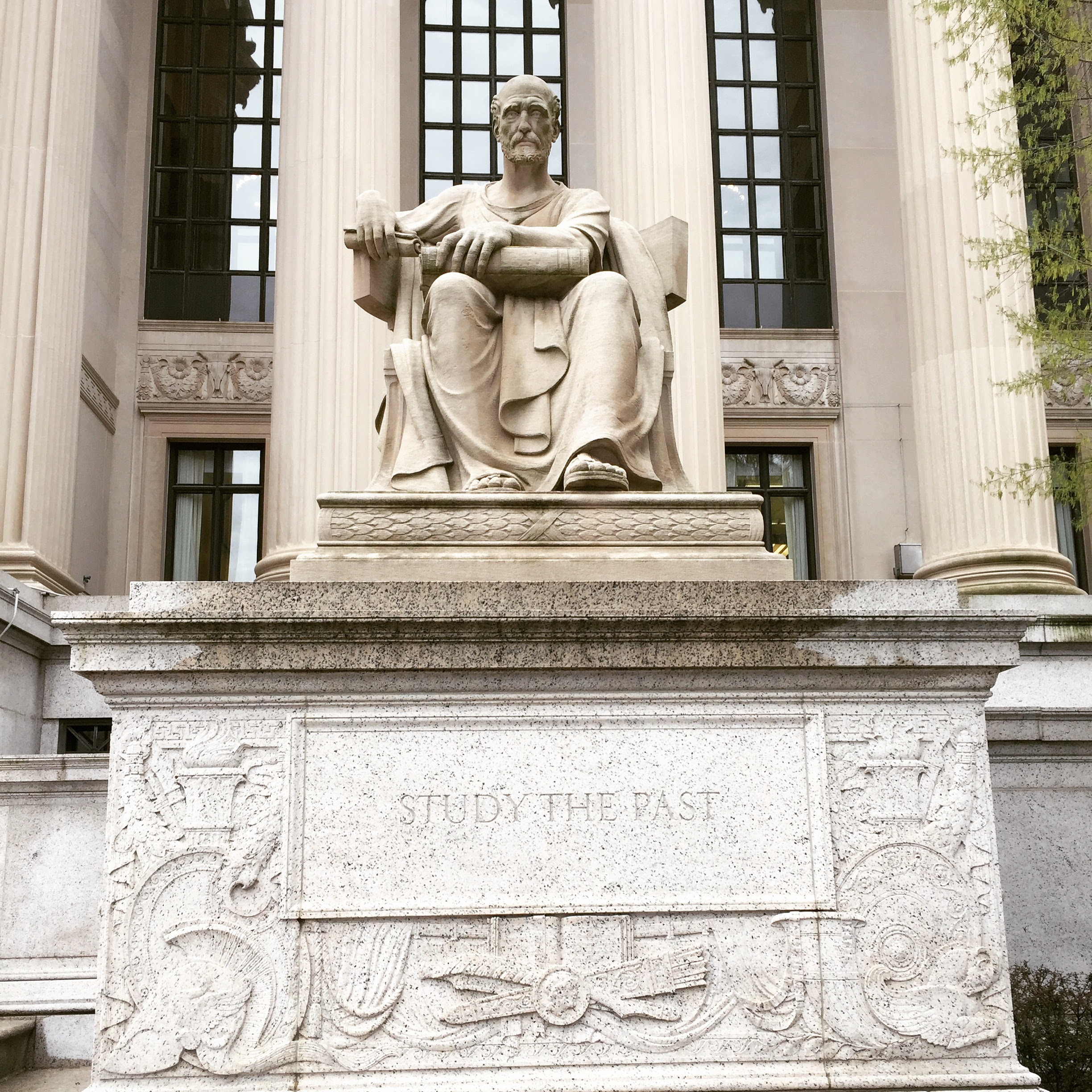 At this point, it was time for lunch, so we stopped by &pizza. After getting recharged, we headed to the Washington Monument, the WWII Memorial, and the Jefferson Memorial. It was beginning to get rainy, but we were able to capture some amazing photos. 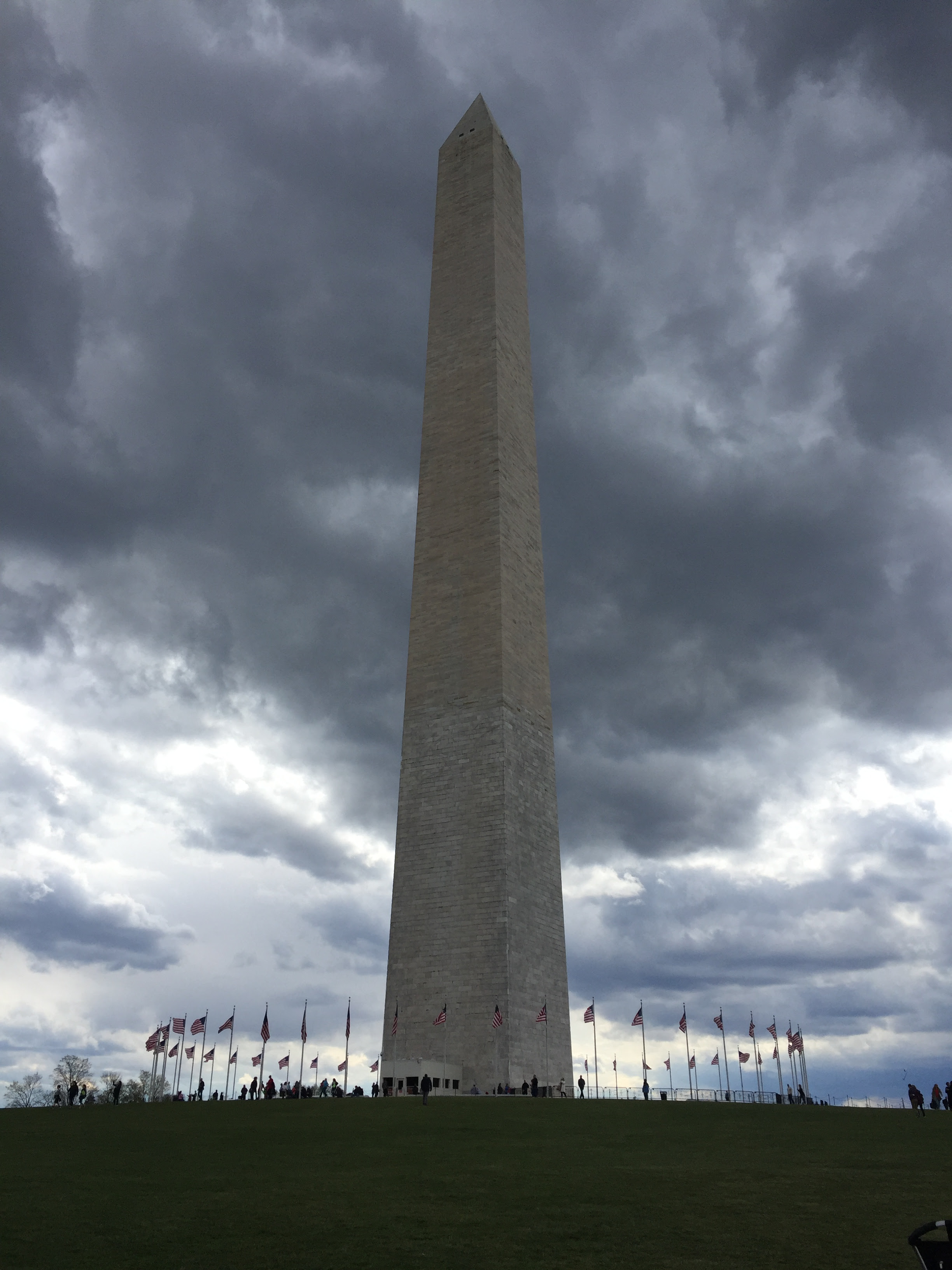 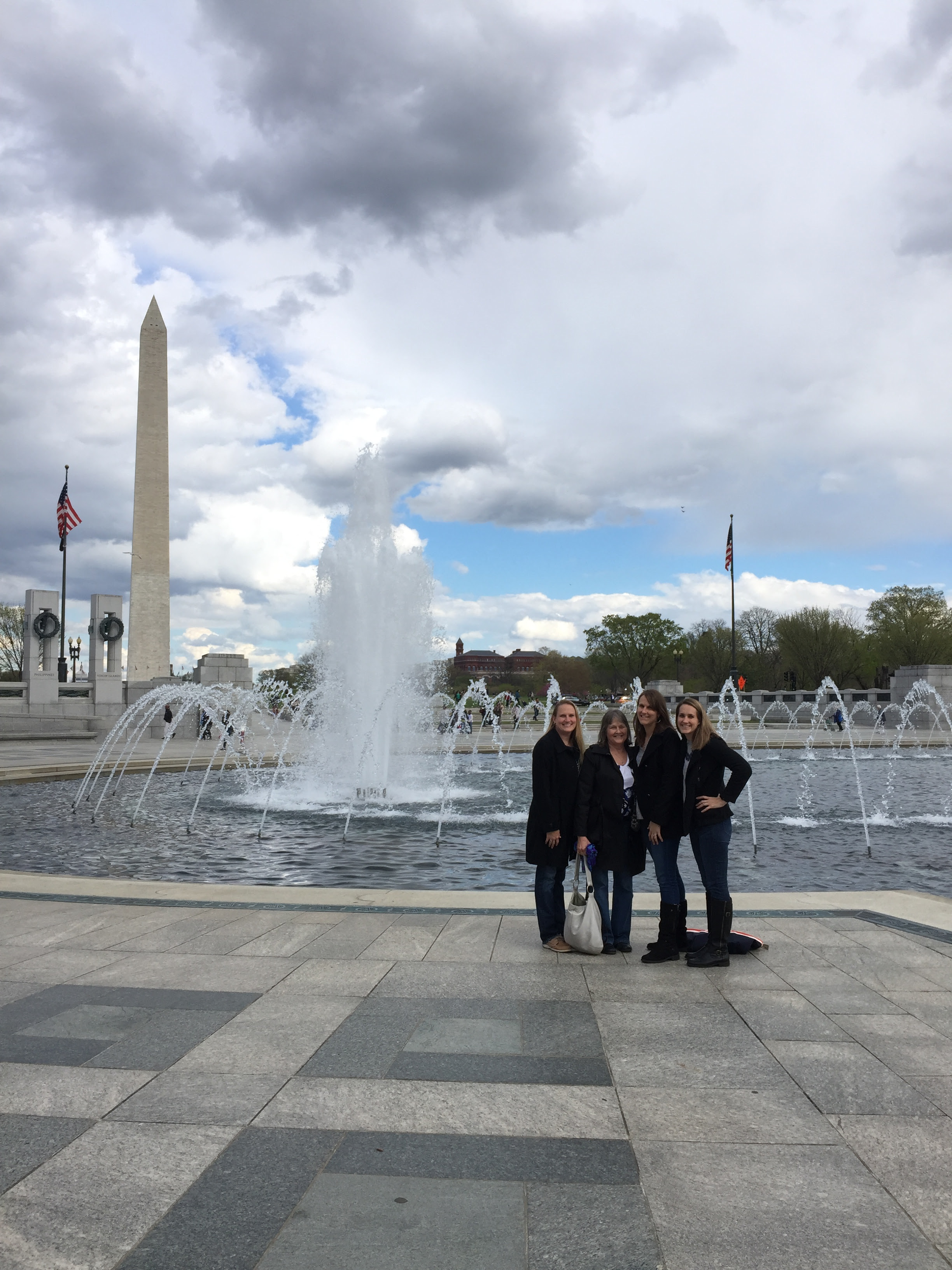 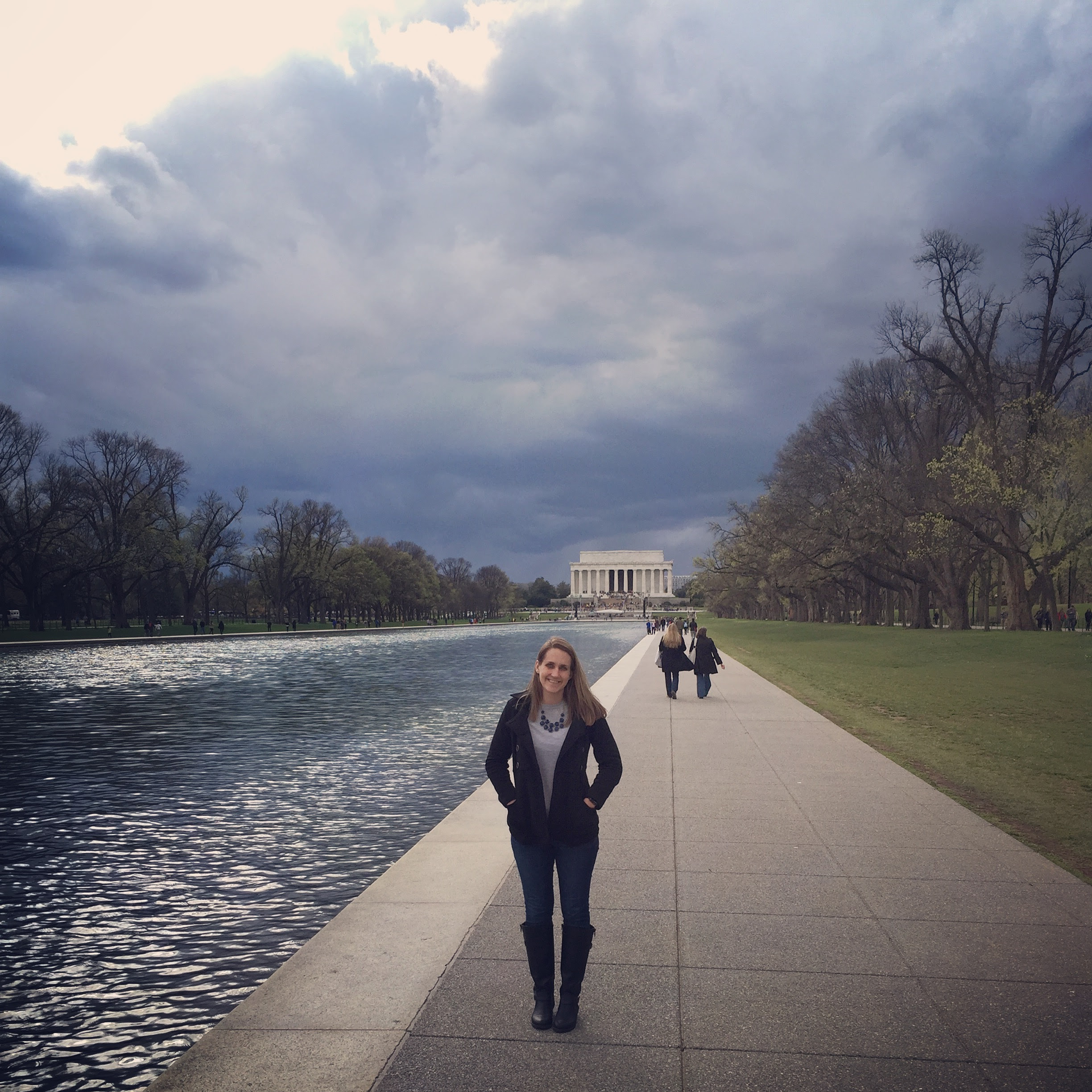 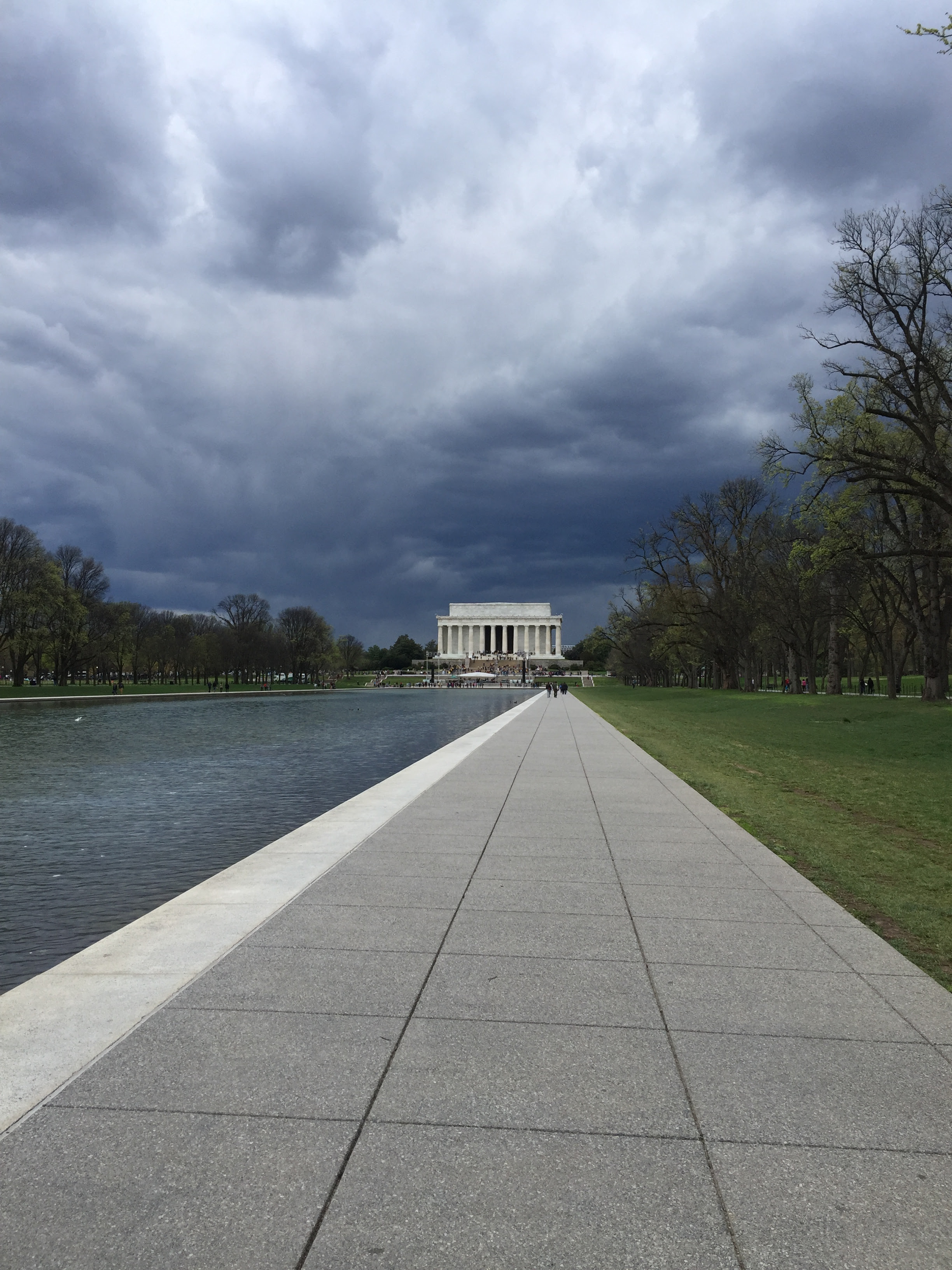 We tried to stop by the Vietnam Veterans Memorial, but it became a downpour, so we hailed a cab and went back to our house. We changed clothes and relaxed for a few minutes before heading off to visit the Pentagon 9/11 Memorial. I've been there before and it was a really moving experience, so I looked forward to showing it to my sisters and mom. When you enter the memorial area, you see 184 benches, each atop a lighted pool of water and etched with a victim's name. They are arranged by year of birth and are situated facing either the Pentagon or away from the Pentagon, depending on if they were in the building or on the flight. The youngest victim was born in 1998, so she was only 3 years old at the time of her death. We thought we could visit Arlington National Cemetery after the Pentagon Memorial and made the mistake of thinking we could walk between the two. In hindsight, it's possible, but not recommended! It ended up taking so long that we arrived after the Cemetery was closed. Doh! We hailed a cab from there and went to Fashion Centre at Pentagon City. Since it's a big shopping and retail area, we figured we could find dinner there. We did just that, but also had an ulterior motive. It was located right near a secret location we didn't tell my mom we were going to! 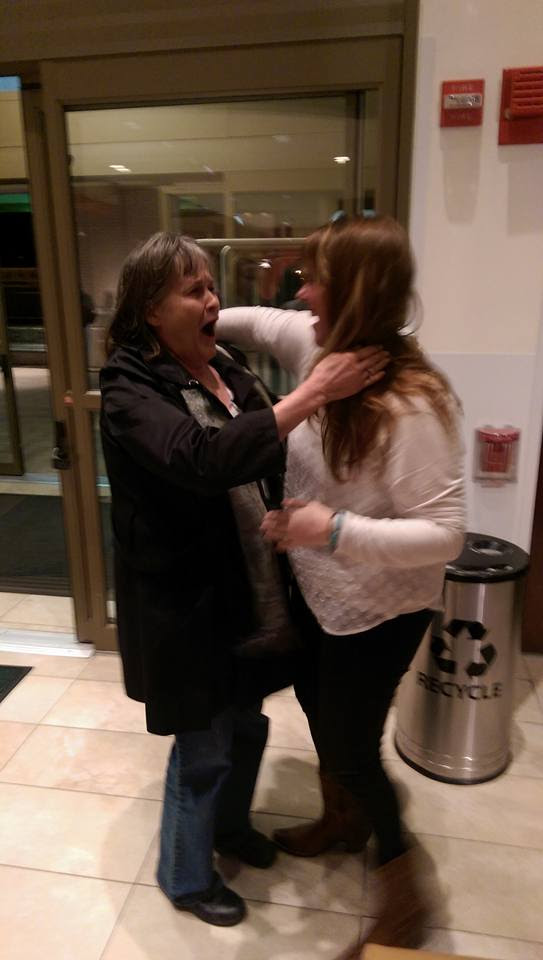 We have a friend named Erika, who my mom likes to say is her fourth daughter. She lives in Boston, so we don't get to see her very often. My sister, Jo, secretly arranged for her to fly into DC on Thursday night and surprise my mom. We told my mom that some of Jo's colleagues were in town for a convention and wanted us to stop by and say hi. Imagine my mom's surprise when we walked into a hotel and turned the corner and Erika was standing there. My sister snapped the pic above as my mom said, "Are you freakin' kidding me?" It was awesome and hilarious! We spent about an hour catching up with Erika and one of her sweet daughters, whom my mom had never met before. We called it a night so they could rest from their travel and we headed back to our house. We made plans to meet back up and spend Friday together. My mom was so excited! (Side note - Apple Watch calculated I took 18,384 steps and walked 8.77 miles that day)

Since we had seen a lot of tourist attractions on Thursday, we decided to take it easy on Friday and just spend time with Erika. She brought her daughter over to our house and we laughed and shared stories for a while. We walked to a nearby retail center to do a little shopping and when we got hungry, we headed to Ted's Bulletin. Their entrees (and desserts!) were delicious and the portion sizes were generous. After lunch, Erika's daughter needed a nap, so my sisters and I hit up Nordstrom Rack to see if it differed by region. We got lucky and scored a few deals and then went back to the house. After visiting with Erika a little more, it was time for her to head back to her hotel to prepare for her trip home. We were so glad she was able to make it to DC and my mom was very grateful for the wonderful surprise. Later that night we walked to Matchbox. Another good meal was had! We finished up the night with some more Dutch Blitz and then hit the hay because of our very early flight the next morning. Apple Watch calculated I took 19,242 steps and walked 9.63 miles that day. Funny, since we had expected it to be a less strenuous day than the one before!
Posted by vanweezy at 10:33 PM No comments: