I thought it might be fun to have friends over to eat, drink, and compete in games for a few hours, so this weekend we hosted a game day. Since we have a lot of game room equipment, a few games were a given to be included in the festivities - pool, ping pong, shuffleboard, and a card game of some sort.  After some deliberations, we chose "war" for the card game and also added battleship, trivia, and Mario Kart (on N64). Then, the preparations began! 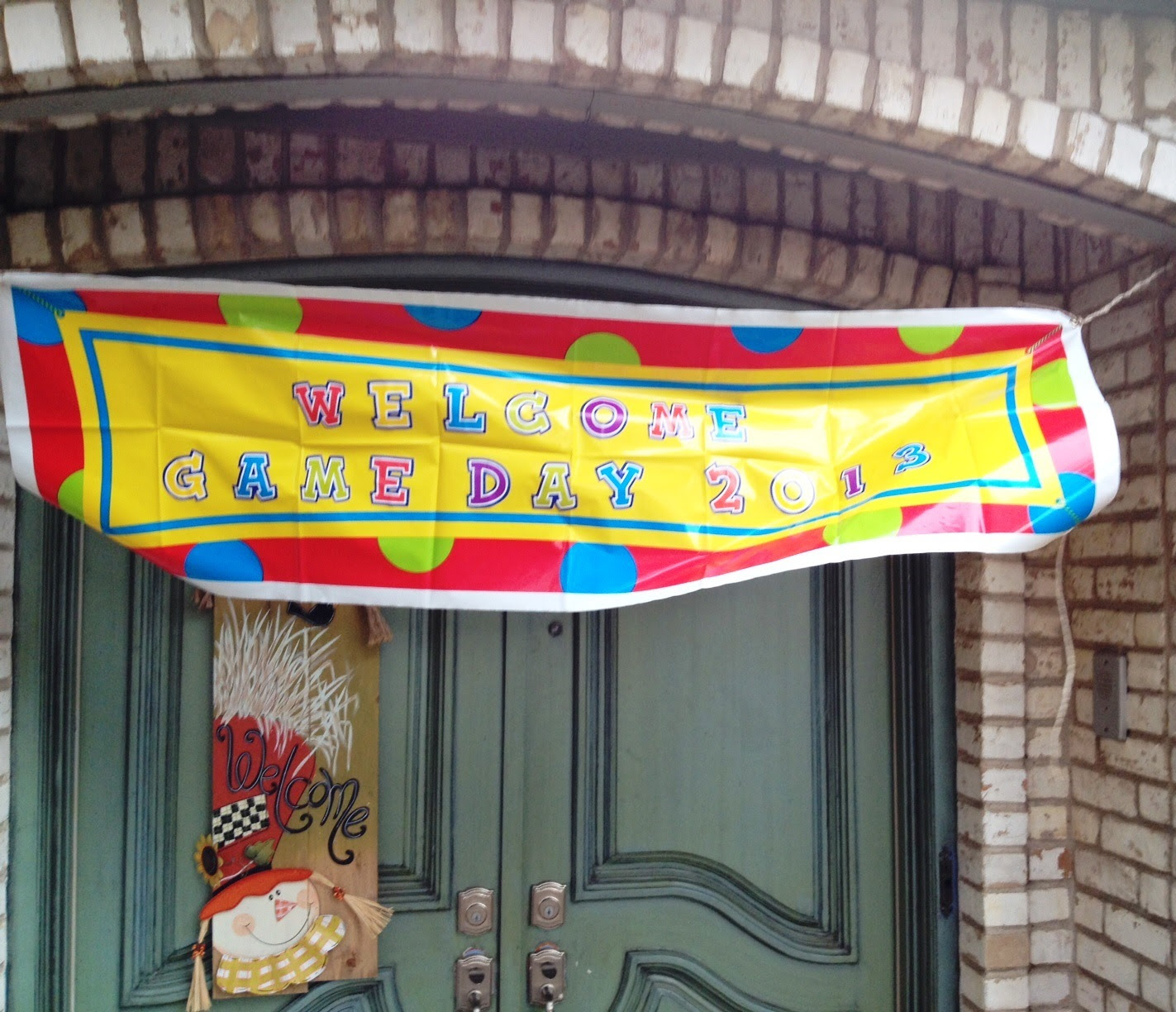 All the competitions were individual, and you could opt out of 1 or 2 games if you didn't feel like competing in them.  After getting everyone's preferences ahead of time, we drew up brackets.  When players arrived, they were first greeted with a "Gear Up" table.  On it were placed name tags, head bands, arm bands, eye black, athletic tape, silly mustaches, athletic cups, a penalty flag and challenge flag, and gatorade.  We also offered a shot of liquor in case anyone needed liquid courage! 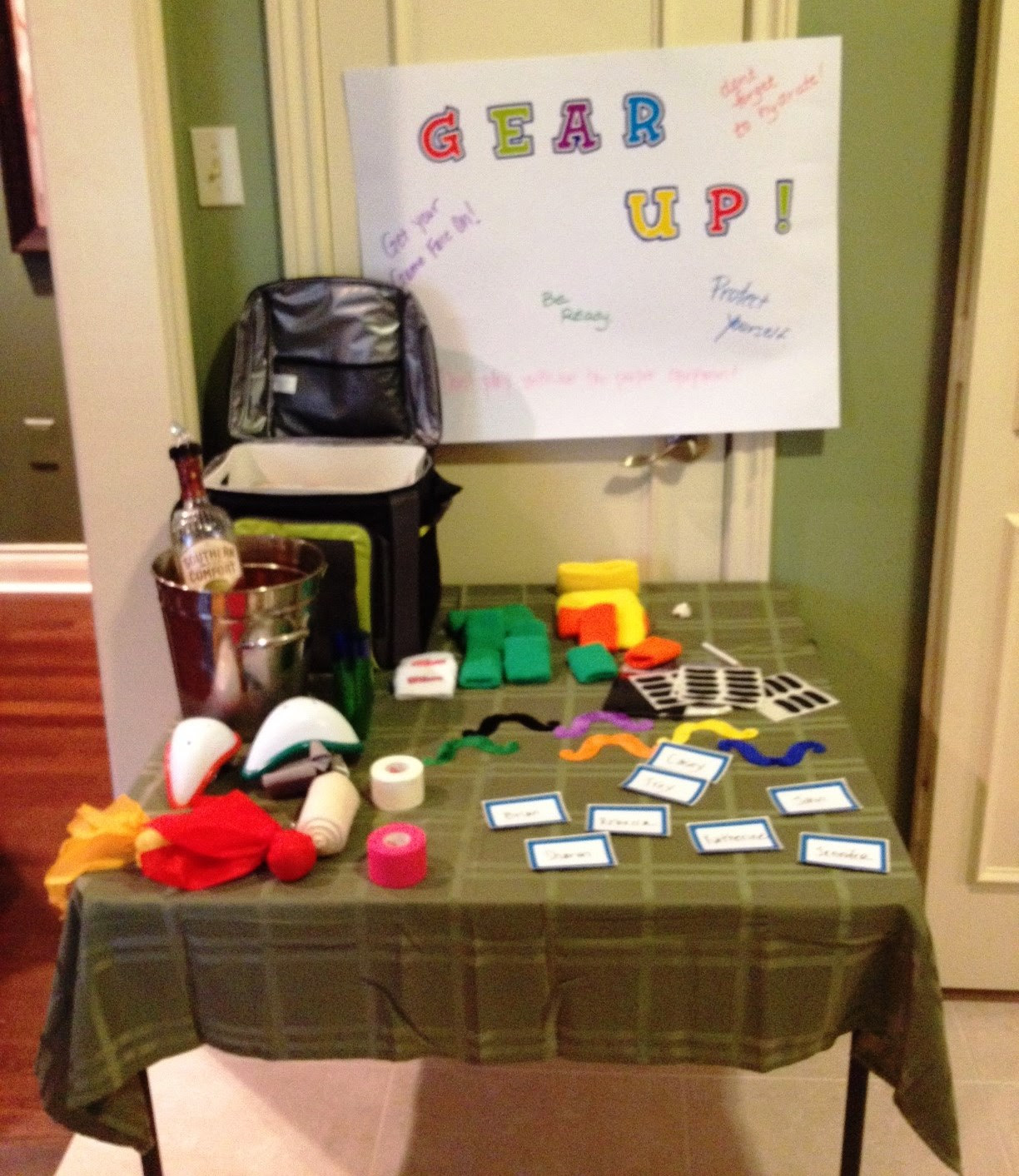 Forgot to take a pic before anyone arrived, so half the gear is already gone!

Once they geared up, they were directed to the garage to participate in the mandatory competition - darts! Each player threw three darts and recorded their score on a chalk board.  After everyone threw, the player with the lowest score was required to wear a turkey hat!  But, this competition was ongoing, so everyone was allowed to come back and throw again throughout the day to try and improve their score.  If you no longer had the lowest score, you could pass off the turkey hat to the person who then claimed the lowest spot. At the end of the day, the person with the highest score won a prize. 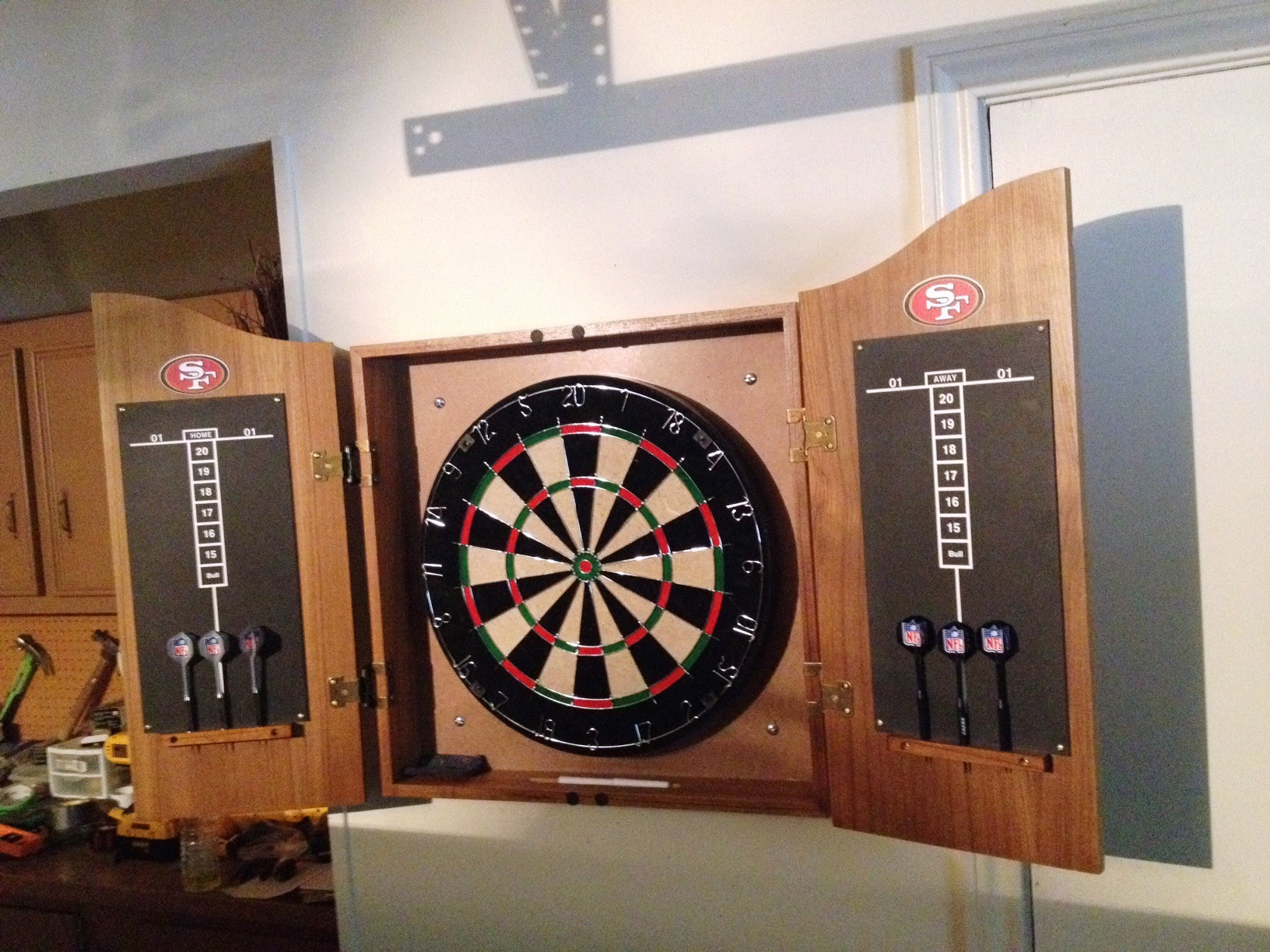 Meezy's new 49ers dart board got some use 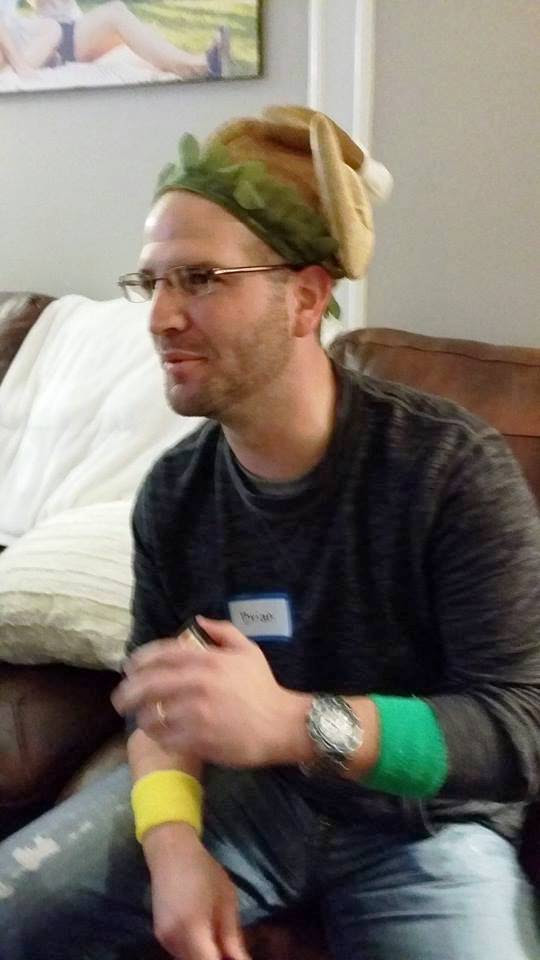 From there, everyone began their tournament play! Each game area had a posterboard with rules and the brackets on it.  Meezy and I wore referee shirts and went from station to station throughout the day, making sure everything ran smoothly.  (We also competed in a few events ourselves).  Each regular tournament game was a shortened version, but the championship match being full length, and then we added optional play where participants could make it a drinking game! 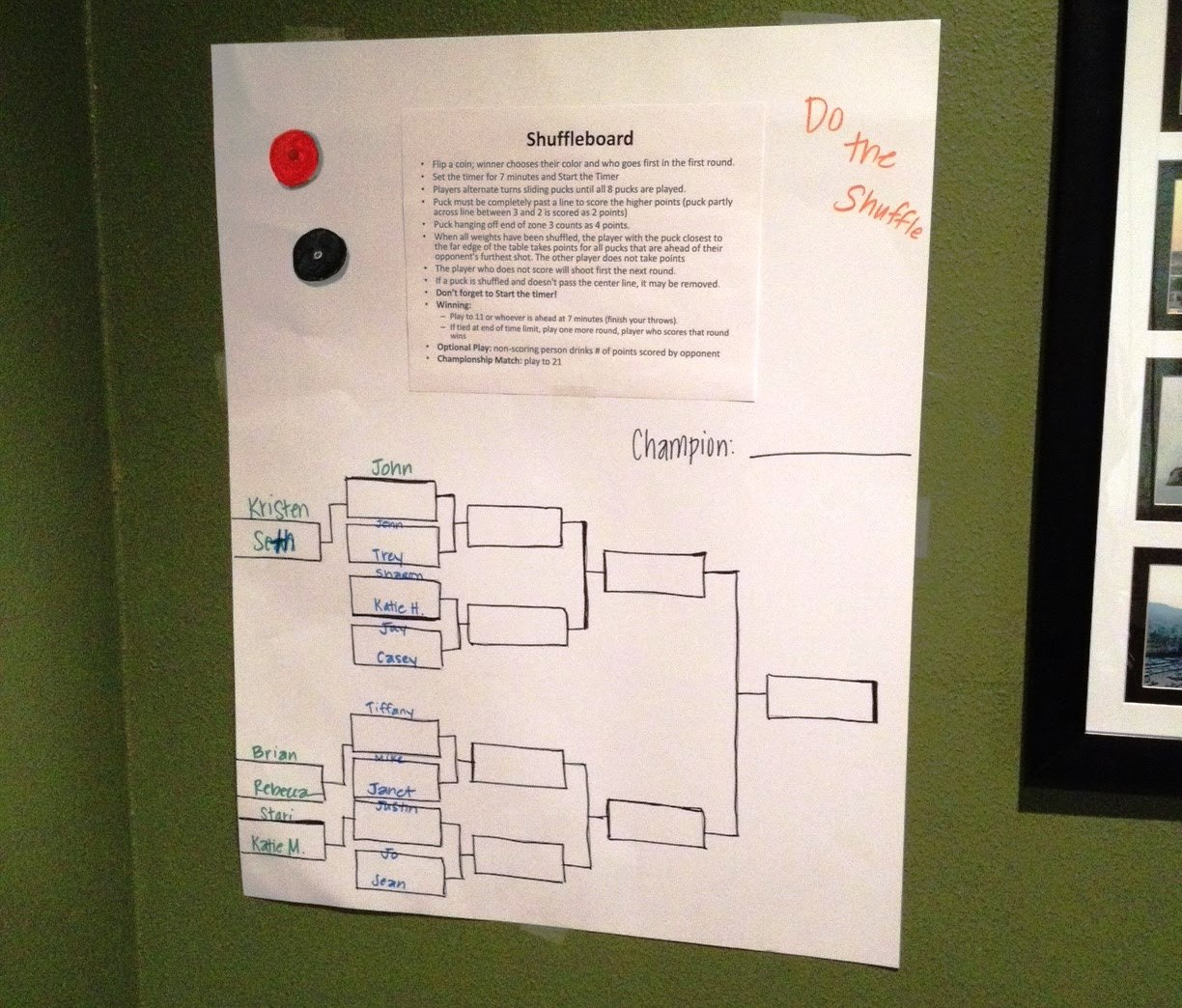 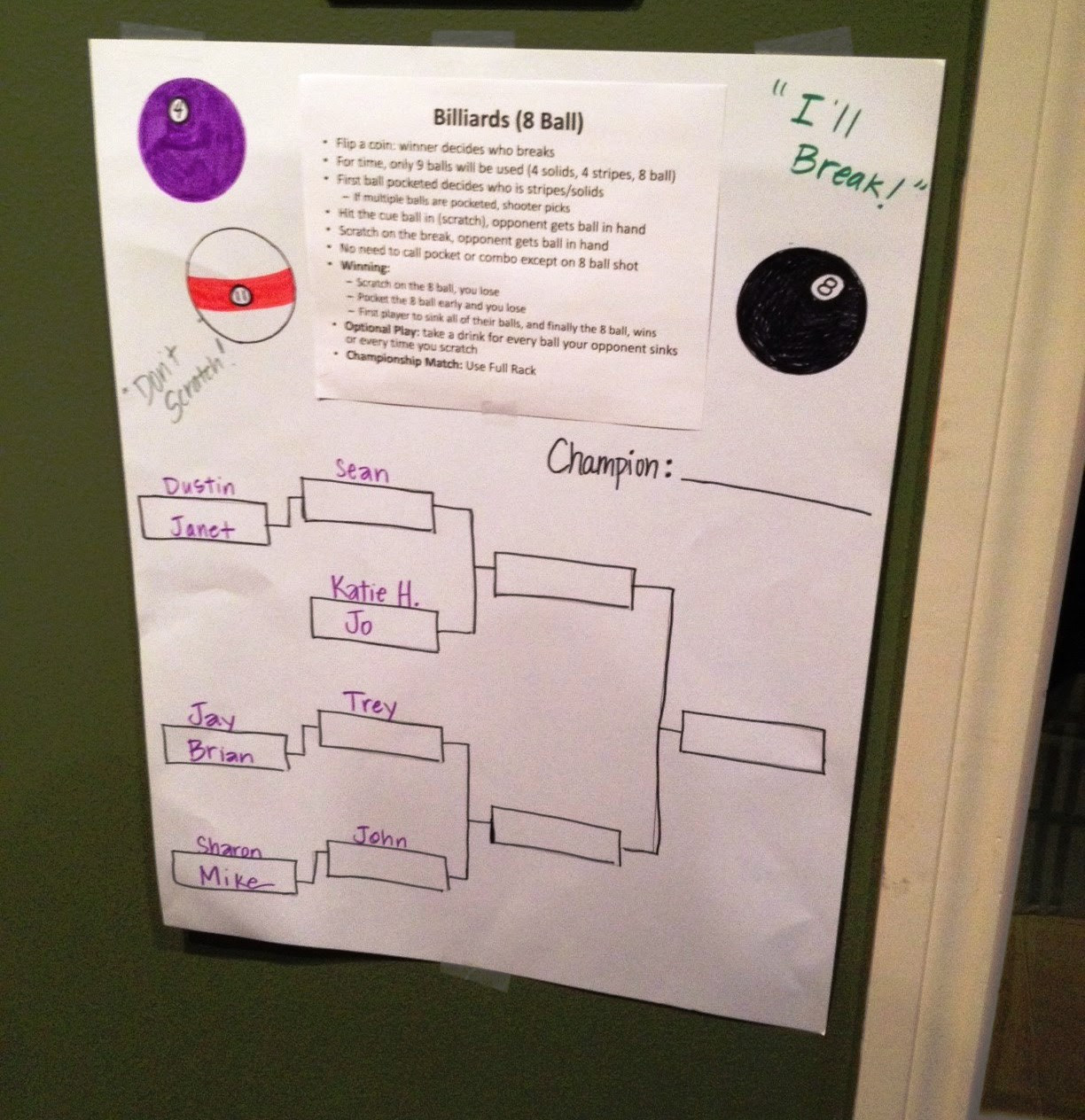 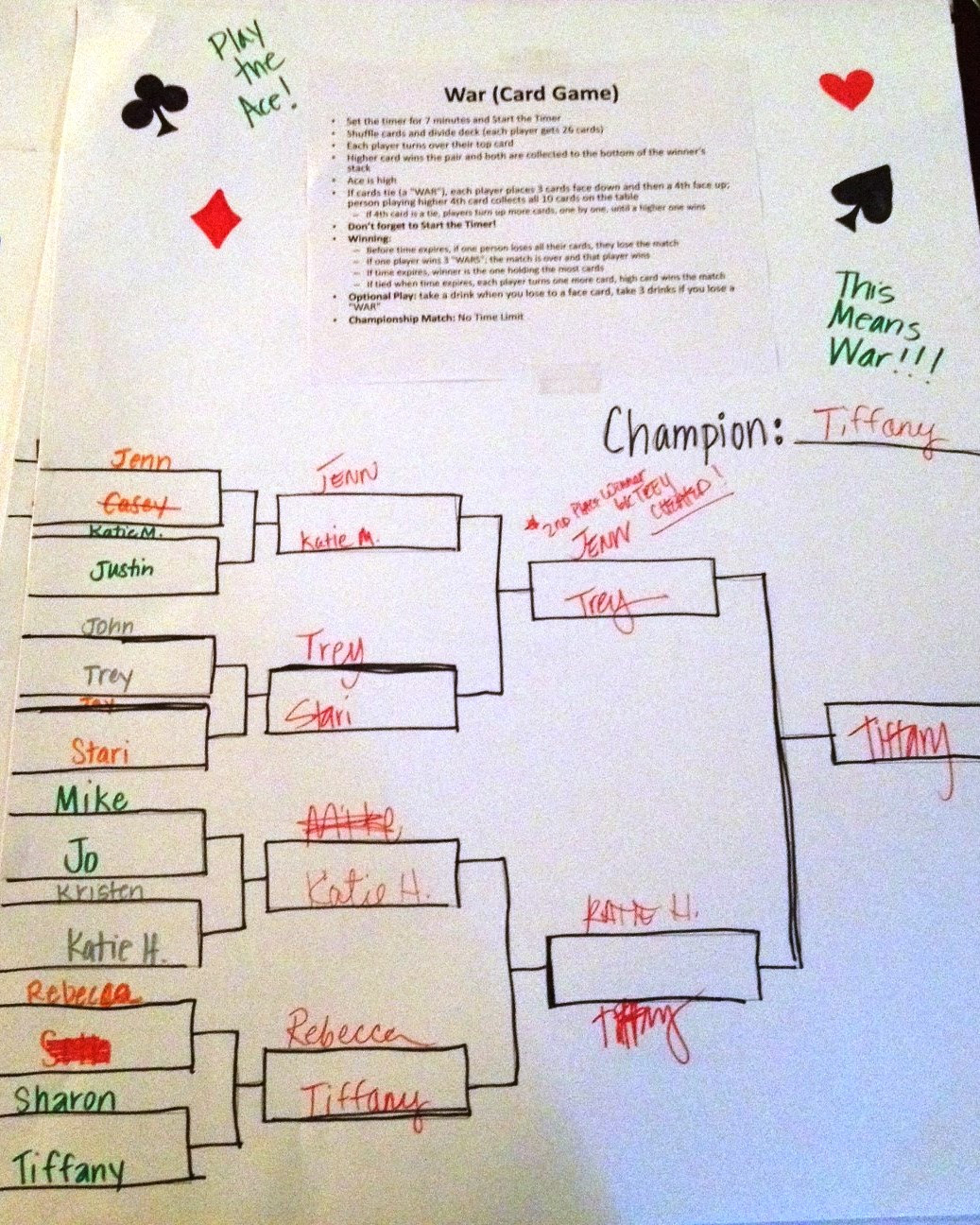 Shout out to my sister for her great artwork!

When each champion was crowned, they were given a trophy.  Second place finishers even got something as well - their prizes were more like stocking stuffers, and some were funny or weird, but they were still appreciated! 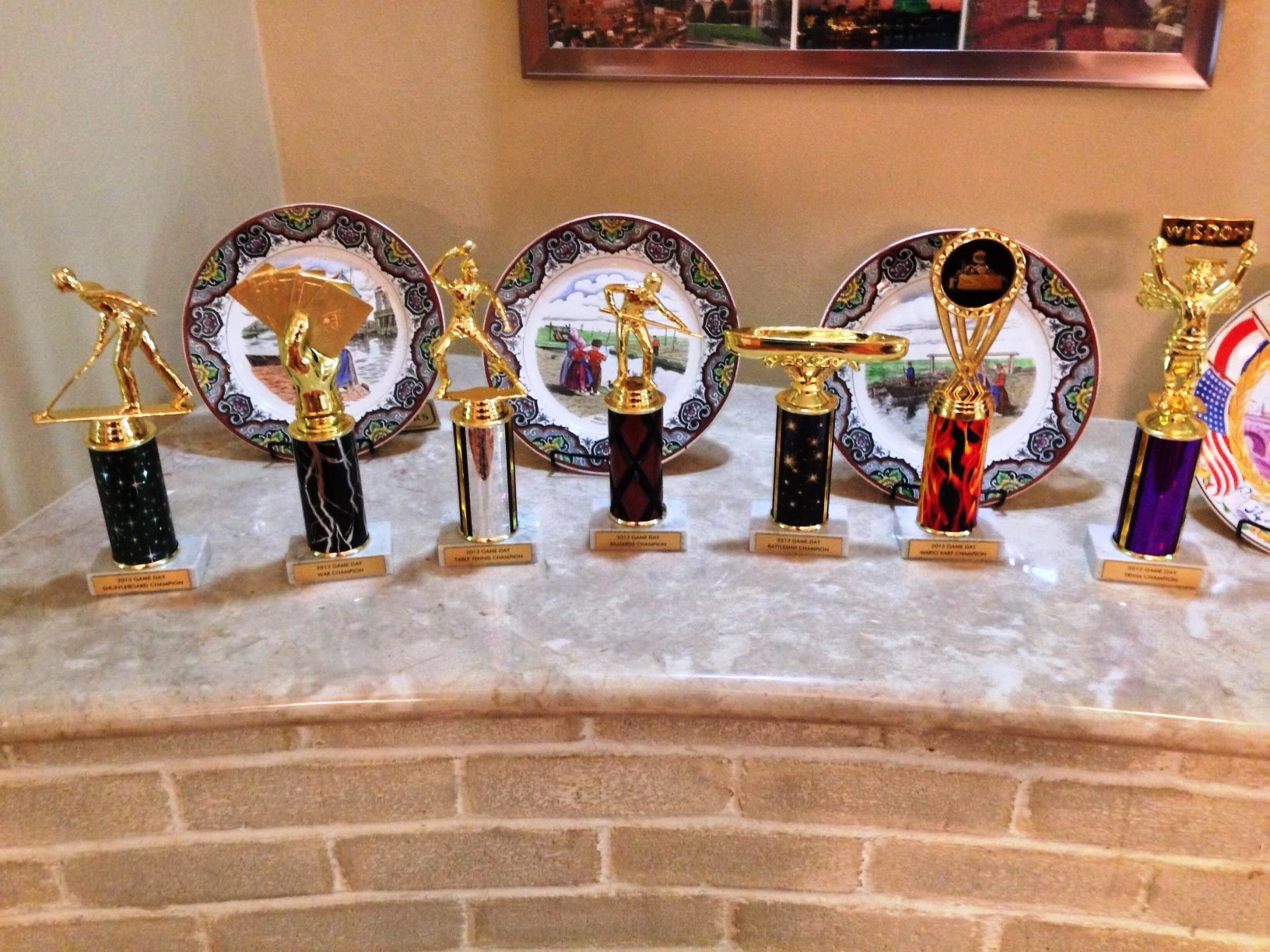 Disregard the plates in the back - those are mine! From L to R, shuffleboard, war, ping pong, pool, battleship, mario kart, and trivia. (Forgot to take a pic of the 2nd place prizes). 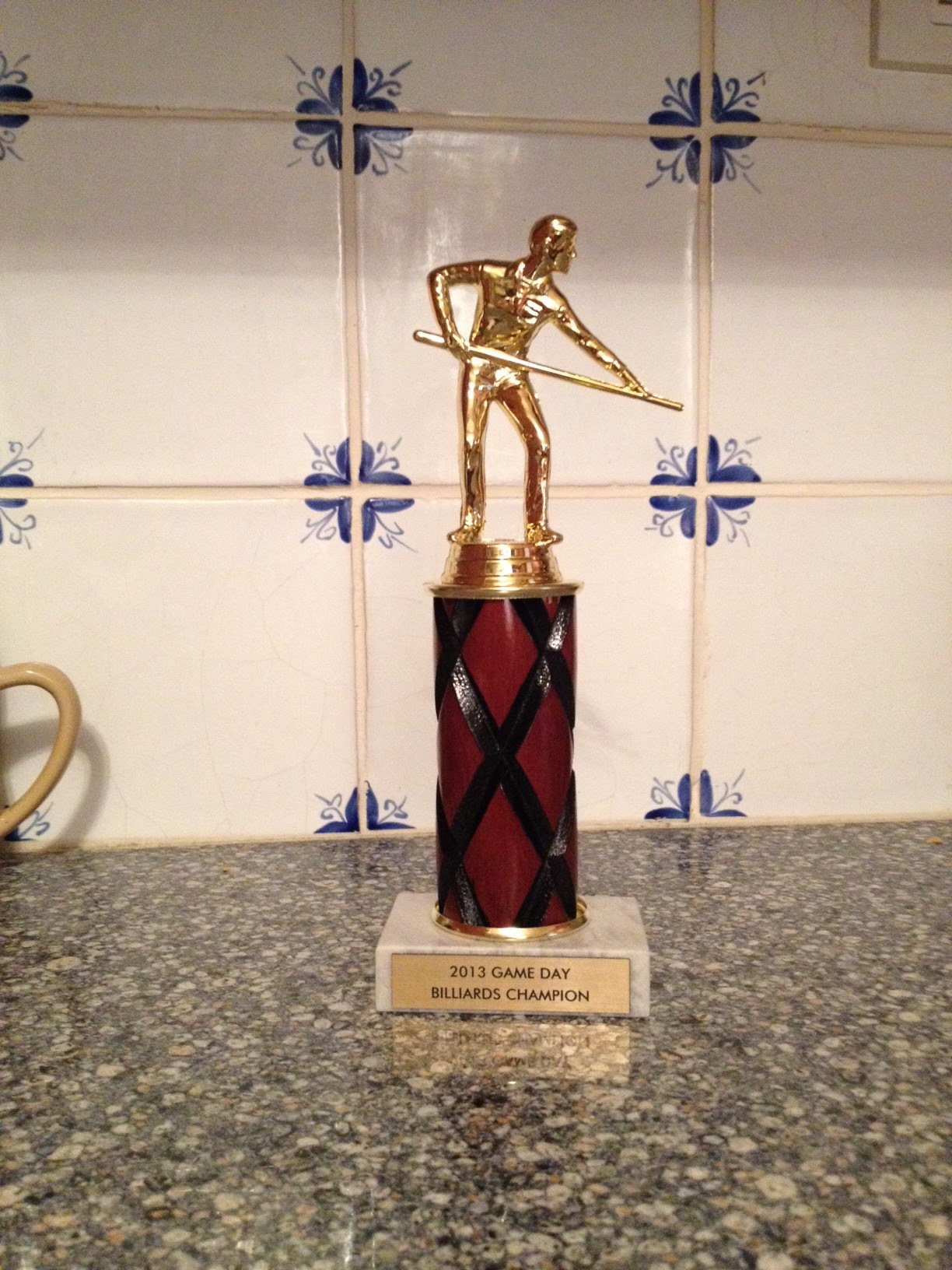 Overall, Game Day 2013 was a great success, and we had many requests from people asking us to host it again in the future.  Some suggested they wanted it to happen even more often than annually, so maybe we'll consider a spring event where some events take place outdoors. 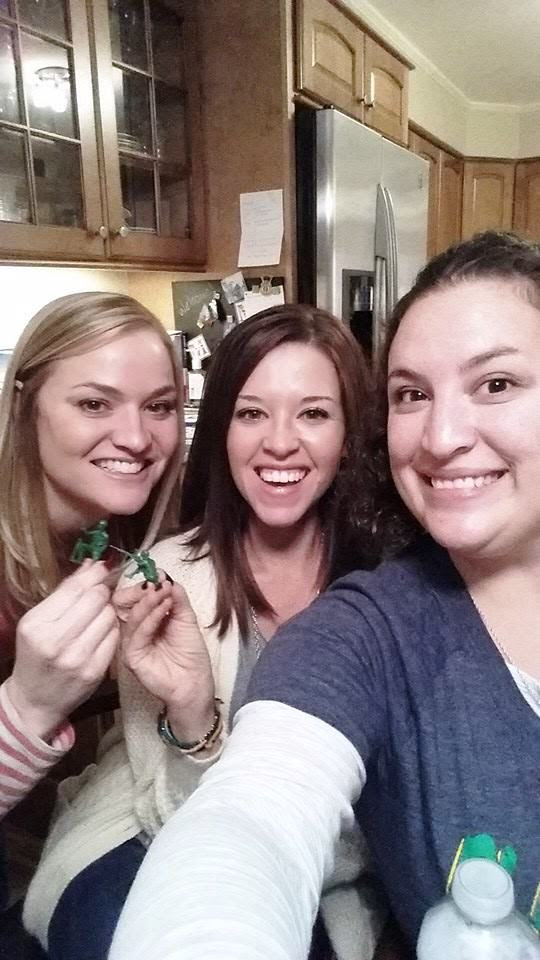 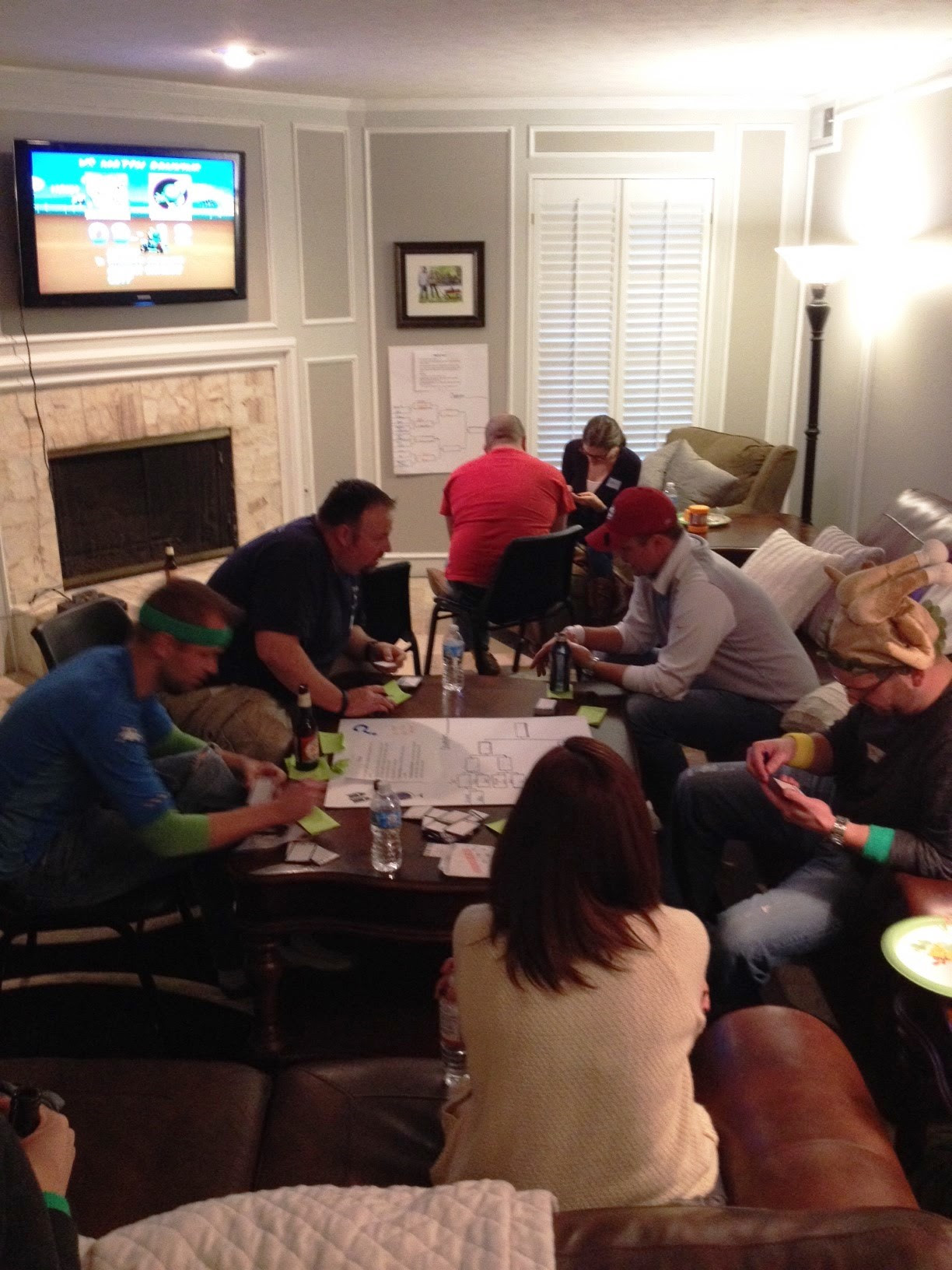 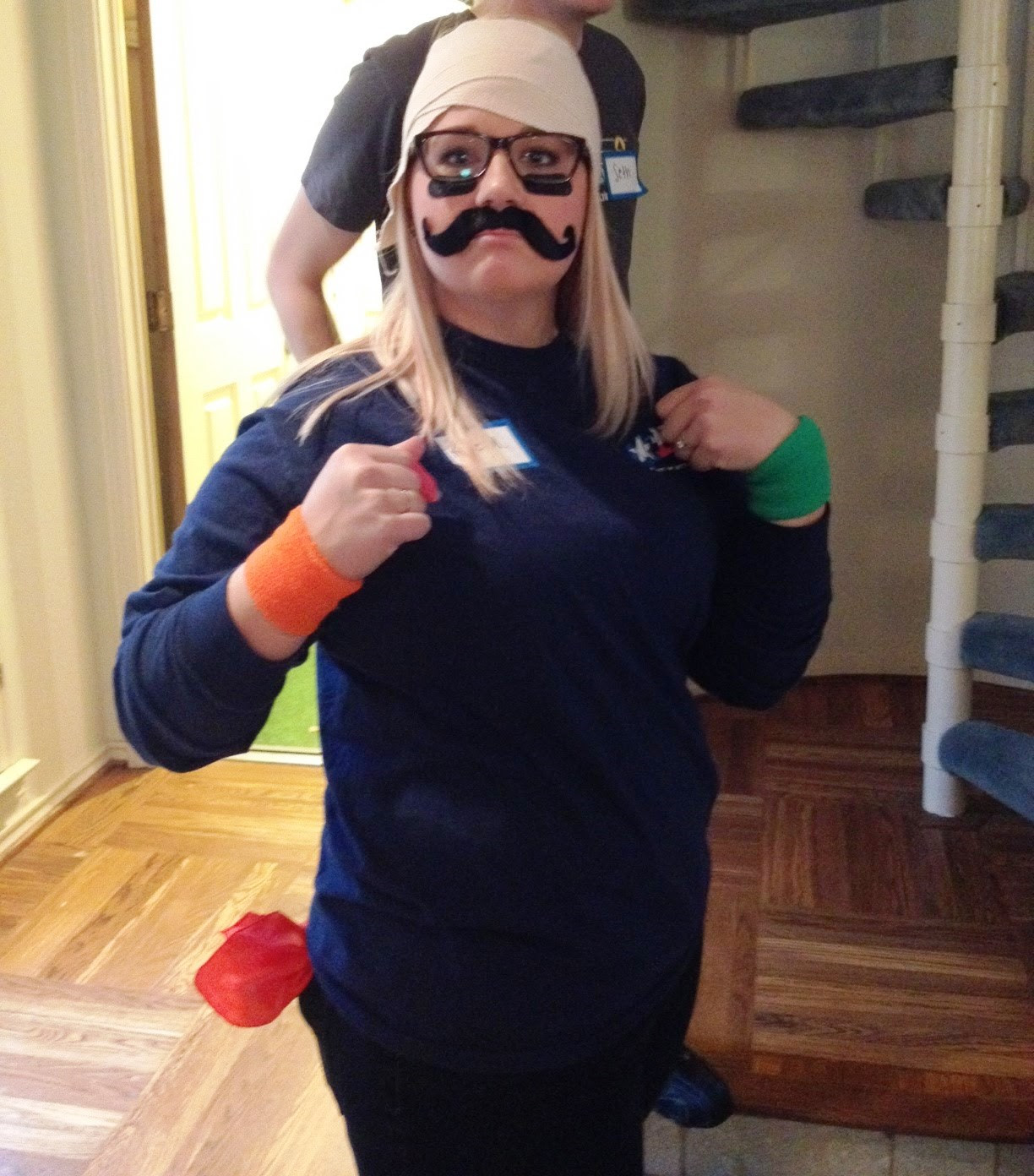 Katie M got the prize for "best geared up" participant! 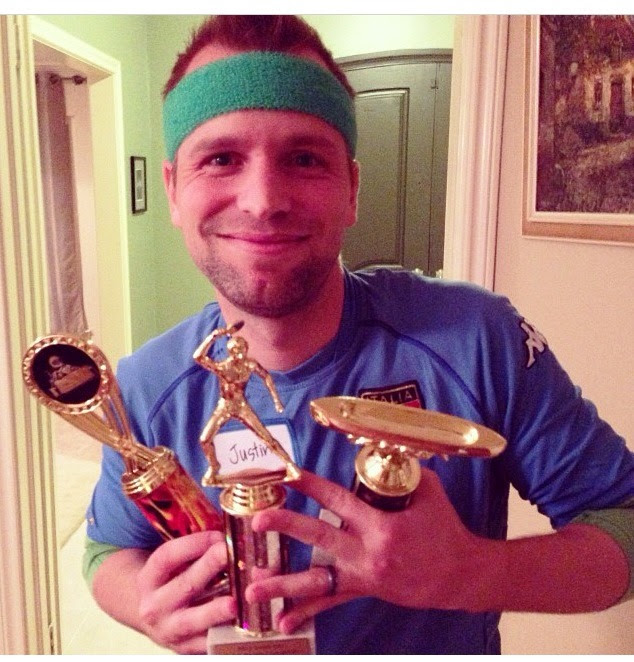 No question who the big winner was - Justin took home three trophies!

My only regret was not taking more pictures!  We had an awesome spread of food available, and lots of exciting matches happened, so I apologize for not documenting that better.  It was a very fun and hectic day, but I'll do better in that area next time!
Posted by vanweezy at 12:55 PM 1 comment:

I could probably write a dozen posts about all the things going on lately, but I'll just do a condensed version of everything and cram it into one!

Work: If you have heard anything about the real estate market this year, you know that it's been one for the record books.  Supply hasn't kept up with demand, so buyers are having to move quickly, make very strong offers, and sometimes face a lot of competition.  I've been working with a lot of buyers lately, who usually don't have time for showings during the typical workday, so my nights and weekends are full!  It's not uncommon for me to be up at midnight, answering emails, researching properties, scheduling showings, etc. It's stressful, and Meezy has had to be a single parent a lot, but it's important for the growth of my career and for me as a provider.  November has already been a great month, and will continue to be, which is good because we're going to be spending a lot on repairs (See: Home).

Friends: It's been tough to find time for friends (See: Work), but I have squeezed in a few opportunities. In the past couple of weeks, I got to go to a birthday party for my good friend's son, a baby shower for another friend, dinner with a friend visiting from out of town, dinner with my bestie, football watching with one of our favorite couples, a neighborhood chili cook-off, a ladies movie night (About Time was awesome), and we'll be hosting a get together for friends later this month.  It's important to keep up a social life so I don't end up hating my job!

Home: Let's just start this section off with a Sigh. Deep breath. It's a good thing this month has been successful for me with work, because it's not so good on the home front. First off, we have scheduled foundation work for next week.  We knew it was needed when we bought the house, and negotiated a lower sales price because of it, but it's time to pull the trigger on getting it fixed.  That's not cheap, but it's necessary.  Next, we think we have a leak somewhere around our pool.  The water level is dropping way too quickly, so we have to pay a company to come out and test for leaks (which isn't cheap), and then see what it's going to take to repair.  Next, we think we have a leak somewhere around Dutch's bathroom. There's a mildewy smell when you walk into it, which my sister experienced when her shower had a leak and all the sub-flooring had rotted.  I'm worried we have something similar, so we're going to get a plumber out to check. If there's a leak, it won't be cheap to fix!  After all of this is taken care of, we have to get new tile installed in Dutch's bathroom. Part of the floor was disturbed when we removed a closet and opened up the wall to install a door, and we need to get it repaired.  Can you say epic home improvement expenses?

Family: I haven't spent a lot of time with my family lately because of work, but there are a couple notable things to mention. My nephew proposed to his girlfriend, which was very exciting! (Short summary: Camden Yards, ring in a baseball, personalized jersey, family hiding in the dugout. Awesome).  He and his fiance will be visiting from DC over Thanksgiving, and I'm happy we'll get to spend time with them. We're planning a family whirlyball gathering over the holiday weekend.  We'll also take a short trip to Amarillo to catch up with Meezy's family.

Health: My health has kinda sucked lately.  I feel like I have a perpetual cold, and despite increasing my walks with Dutch, I've gained a couple pounds.  Quite disappointing.  Meezy and I are in the midst of a plank challenge, though, so that's cool. Every day in November we plank twice a day, slowly increasing the time each day.  We're up to a minute now, and it's definitely getting easier each day.  I think we'll try a different challenge in December. Wall sits, maybe?

Meezy: Man, I owe this guy big time. He has been incredibly patient with my work schedule lately and has taken on way more than 50% of the parenting responsibilities. We haven't gotten to go on a fancy date in a while, but we have been able to sneak in some weekday lunches while Dutch is at daycare.  It's nice to be able to take a break from work and spend some time with my love.  My favorite time with Meezy lately has been when we swap stories of the adorable stuff Dutch has done.  We're just so in love with that kid.

Dutchie: By far, this is my favorite topic to write about! The kid is just blowing my mind with how much he learns. He understands so much, even if his vocabulary can't quite convey it yet. From being able to name tons of different animals, to recognizing multiple alphabet letters, I'm just in awe of him. He has also recently learned that we have nicknames for our doggies, and he grasps that they have multiple names. That probably sounds silly, but I'm impressed by his understanding of that. When Casey goes outside to use the bathroom, he exclaims, "Good job, Pitties!" (We used to call her Pretty Casey, which we shortened to "Pitty" for some reason).  Dutch has also mastered the use of the Ipad and Iphone, and can, within seconds, open the camera app to take a million selfies or open the youtube app to watch videos. We also have a Monkey Preschool Lunchbox game on our devices that he can easily navigate to and play entirely on his own. He says, "I see cars!" or "I see big truck!"  I think the maximum length of his sentences is about 3-4 words, but that's pretty good for a 20 month old. I could go on and on!

As mentioned in previous posts, the people who owned our house before us loved the antique look. Everywhere you turned, they had used the same color scheme - on doors, on molding, on walls, on the kitchen island, on the hutch, etc.  I think it would've been okay on something here or there, but because it was so persistent, it just made everything look dingy.  We are slowly painting over it everywhere we can, and the latest accomplishment was the built-in hutch in the breakfast area.  My pictures aren't awesome, but hopefully you can see the change from "dirty-looking" to fresh and clean.  I used a cream for the majority of it, with tan as the accent color.  Here's the before and after: 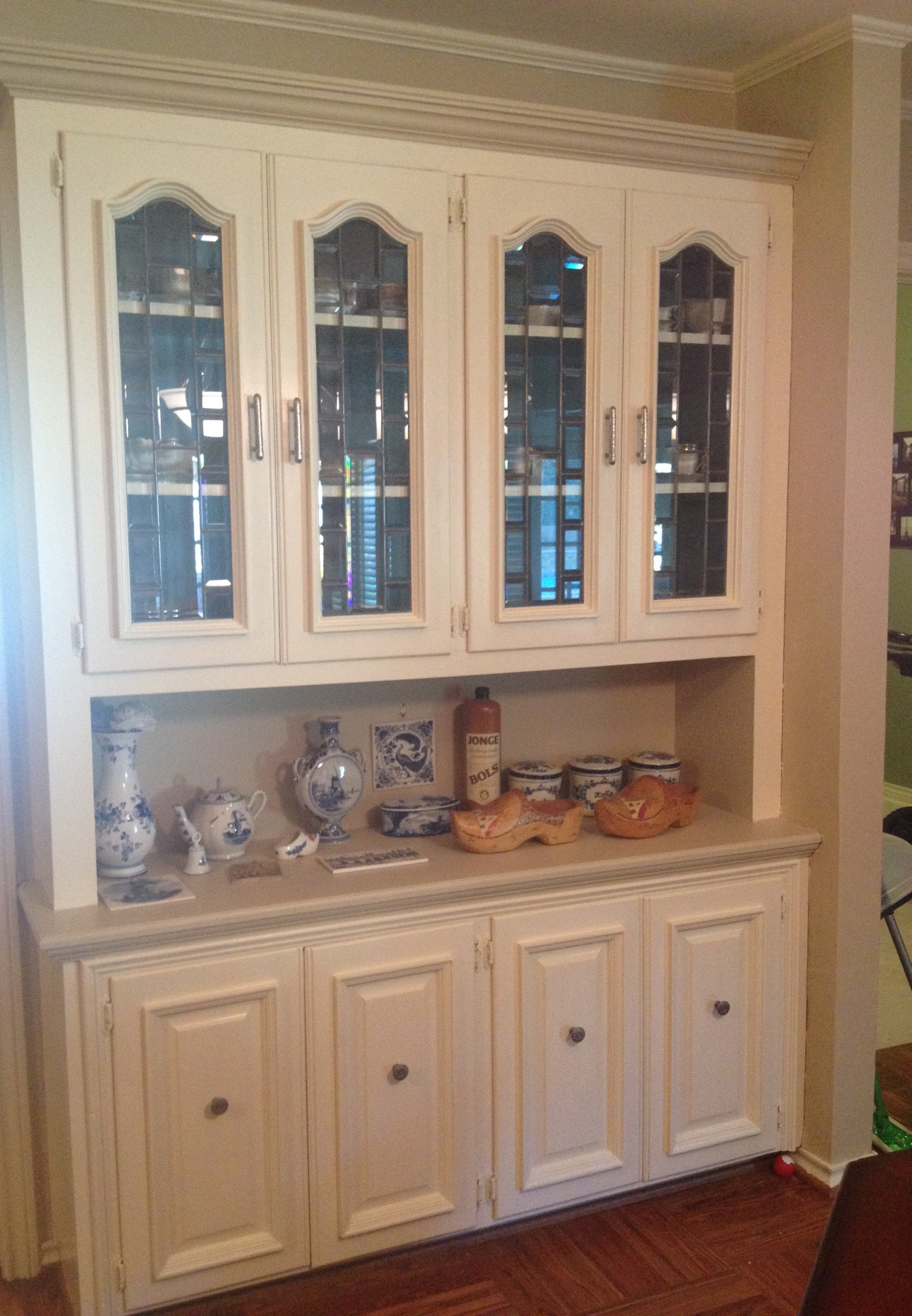 Also, the walls in the kitchen were covered with a weird textured wallpaper.  It was another look that appeared dingy to me, so instead of taking down all that wallpaper, I painted over it with a tan color to make the texture less noticeable.  It is a subtle difference, but definitely an improvement: 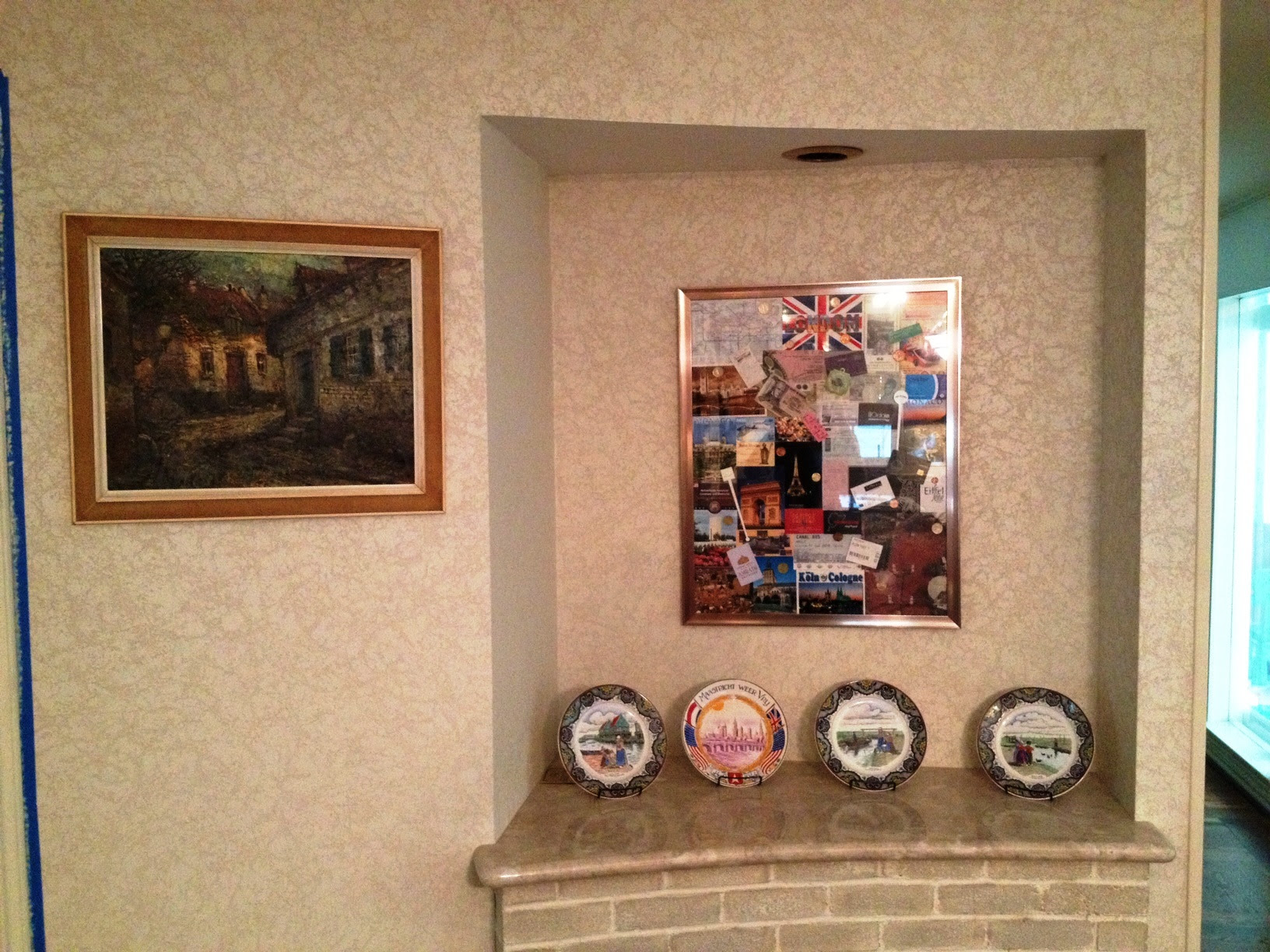 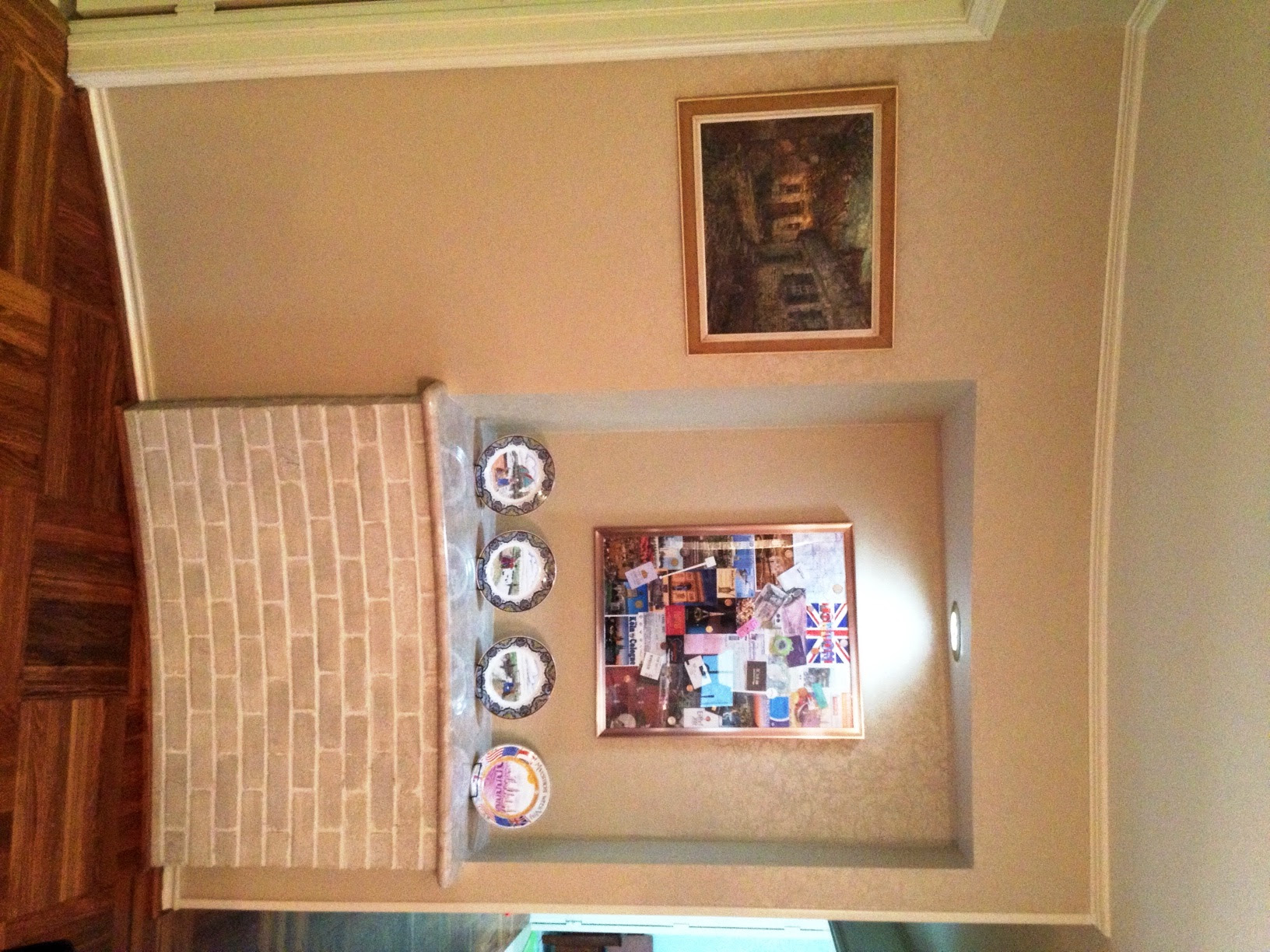 Posted by vanweezy at 9:55 AM No comments:

October at the Arboretum

Before Halloween, Dutch and I joined my sister and her kids and went to the Arboretum to check out the activities and to take some pictures. It was a beautiful day, and the kids had a great time.  I'm hoping to buy a membership for the coming year, because I think Dutch will enjoy it even more as he gets older. 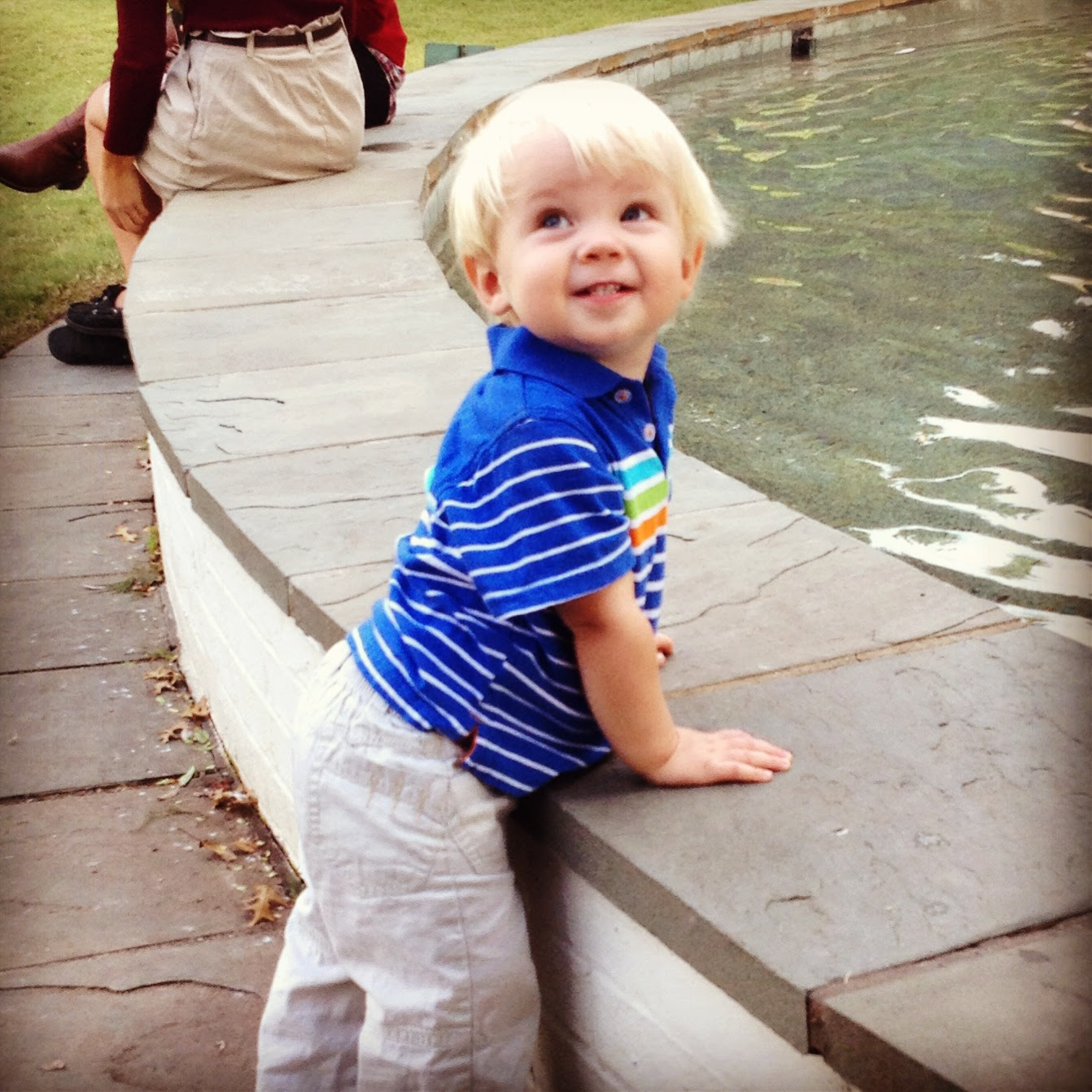 For Halloween, Dutch dressed up as Dennis the Menace.  Not gonna lie, it was pretty easy to accomplish since he already looks like him and we had the items in his wardrobe!  All we had to make was a slingshot. 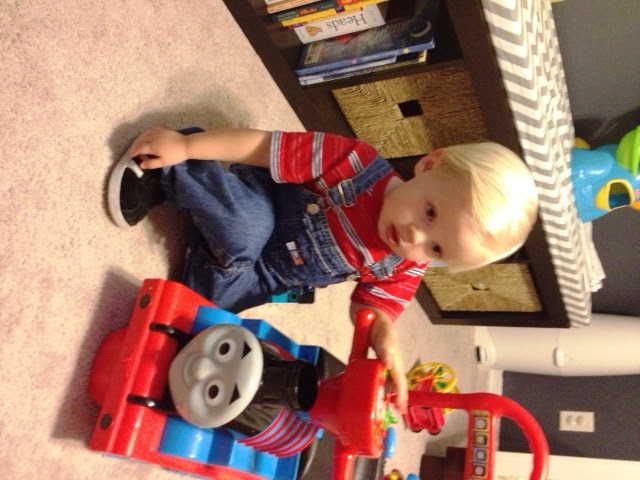 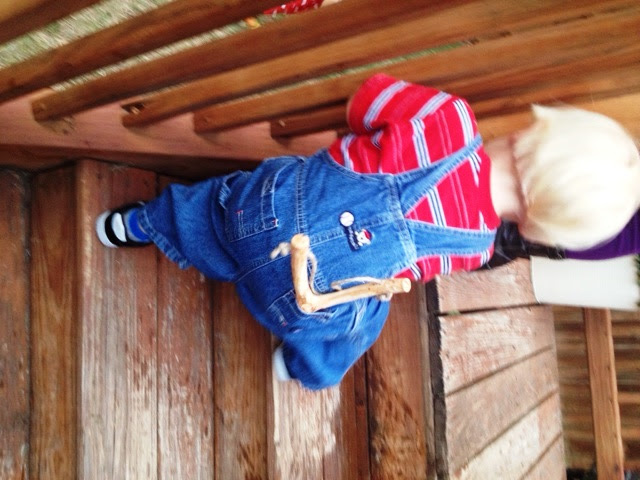 Posted by vanweezy at 9:43 AM No comments: