We have an oversized 2-car garage with multiple closets, and yet it still felt like we couldn't fit all our stuff in there. The previous owners had put down some green turf-like material in the hallway from the garage to the house and in the area where you walk in front of the cars. They had also put down a coating or painted the garage floor at some point, but its useful life was over a long, long time ago. For these reasons, Meezy and I decided it was time to give the garage a complete overhaul.

There was a work area in the garage that had a built-in table in it, but it didn't provide any good storage and it wasn't the best use of the space. Meezy tore that out and we found a rolling workbench at Home Depot that fit the space perfectly. 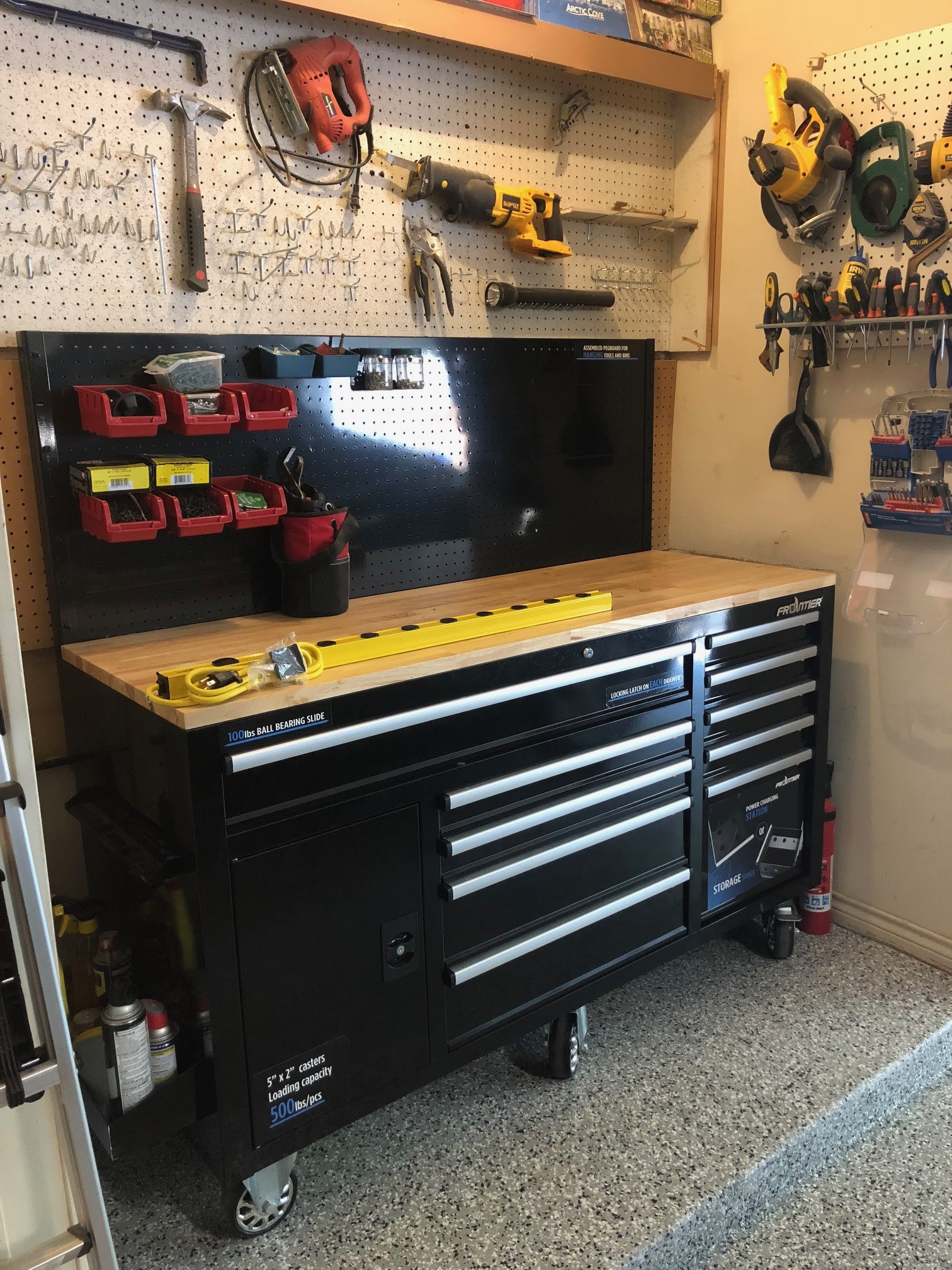 In the staging area from the garage to the house, there used to be some more built-ins, but they were oddly sized and again weren't the best use of the space. We had previously ripped those out and bought a metal shelving unit instead and also kept our second fridge there. When we remodeled the interior of our house, we were able to relocate the fridge to our laundry room, so there was an opportunity to re-purpose the space in the garage. I decided I would rather have a mudroom storage unit there, so I went on the hunt and finally found one I liked at Home Depot online. It is a beautiful piece and it fits the space very nicely. 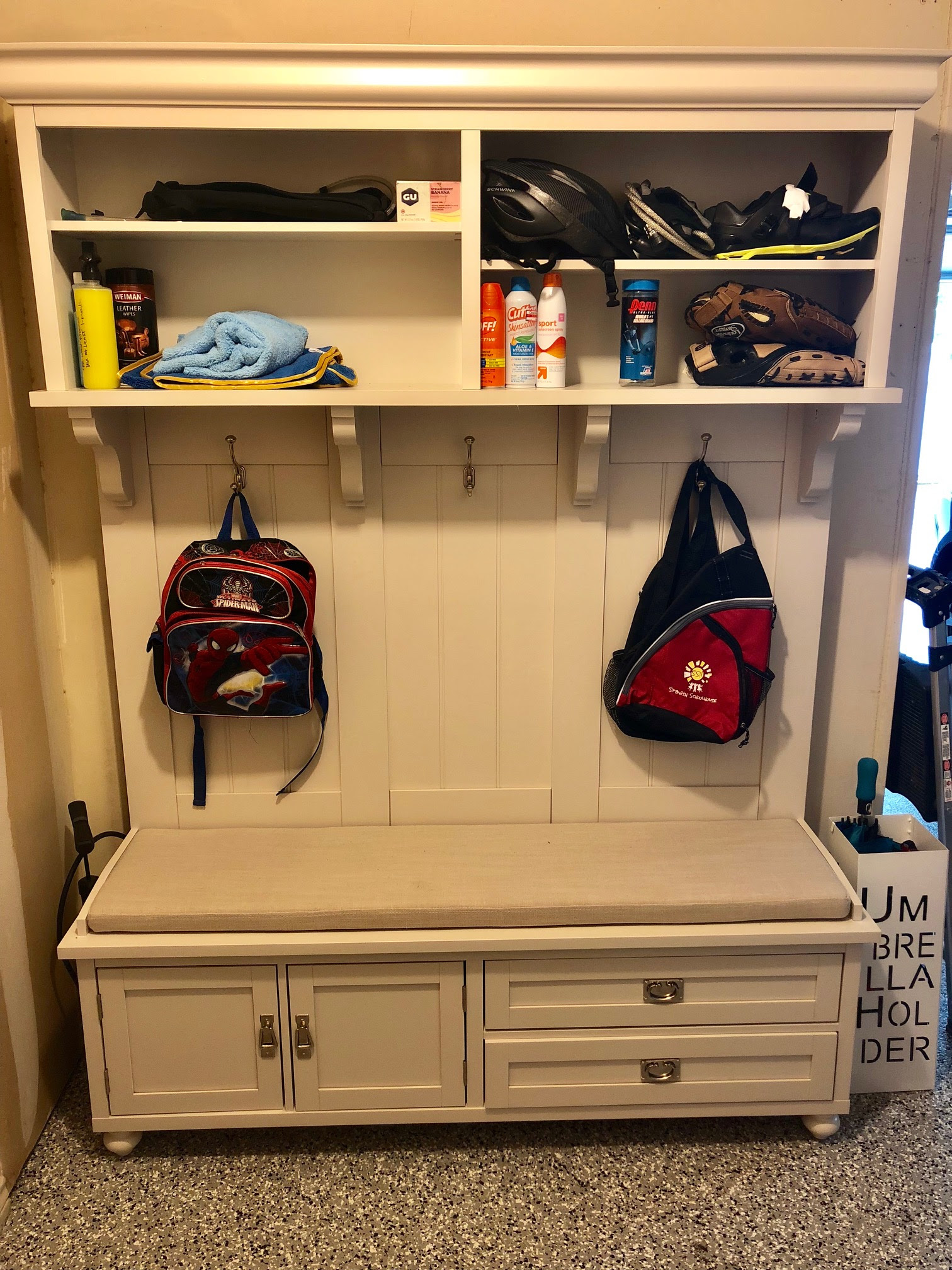 The biggest change we wanted to make concerned the floors. Once we ripped out the green turf, the floor looked even worse underneath. It had remnants of glue and was dirty and discolored. There were low spots throughout the rest of the garage and it just looked awful overall. We found a company that would clear out all the old glue and paint/coating, and then start fresh with an epoxy coating. In order to accomplish that, we had to remove every last thing from the garage that came in contact with the floor. It felt overwhelming at first, but it was really nice to force ourselves to evaluate all the junk in there. We ended up getting rid of a lot of stuff, organizing the closets better so we could put more in them, and installing an overhead storage rack. Here are pics showing what the floor looked like before: 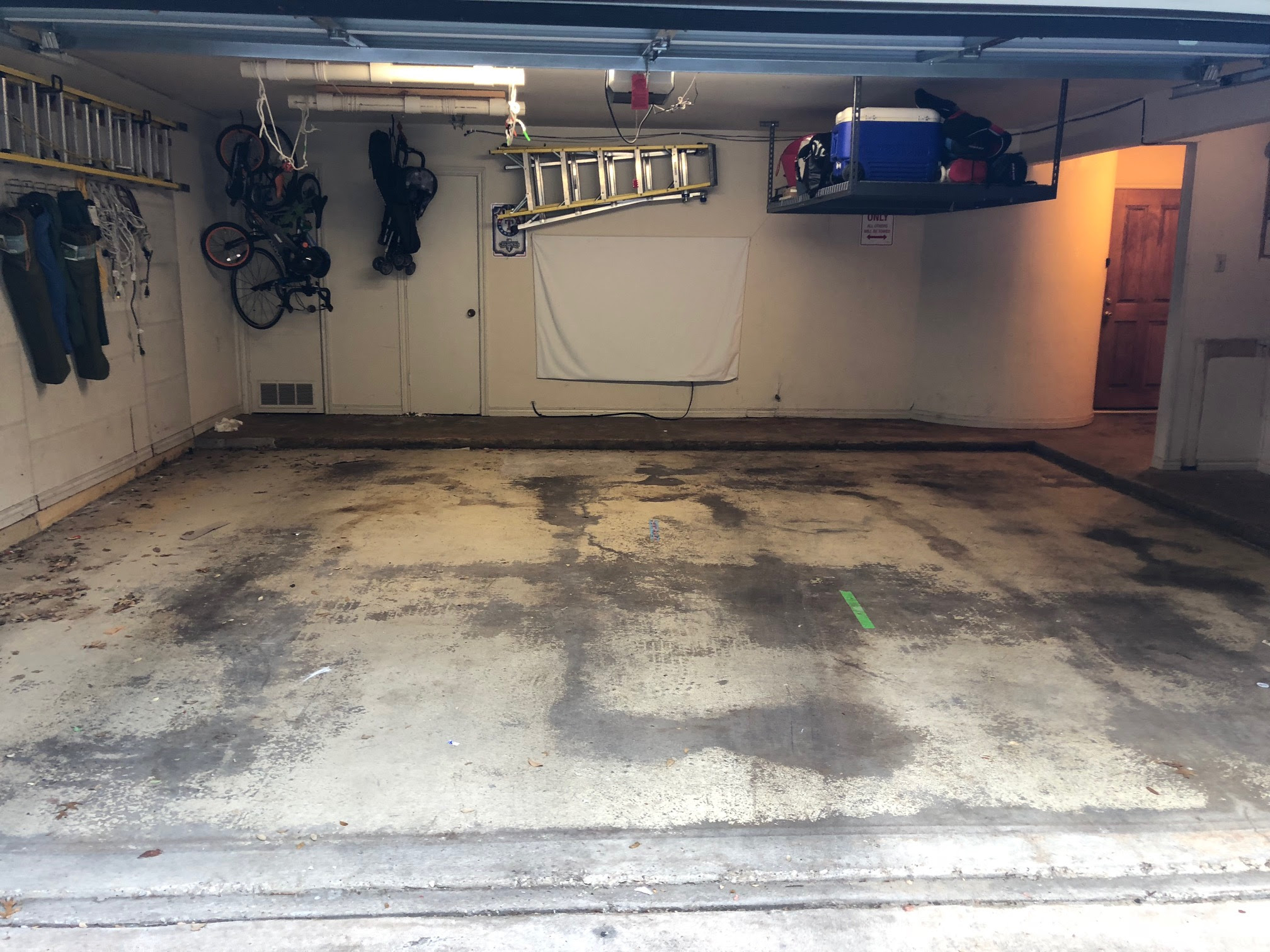 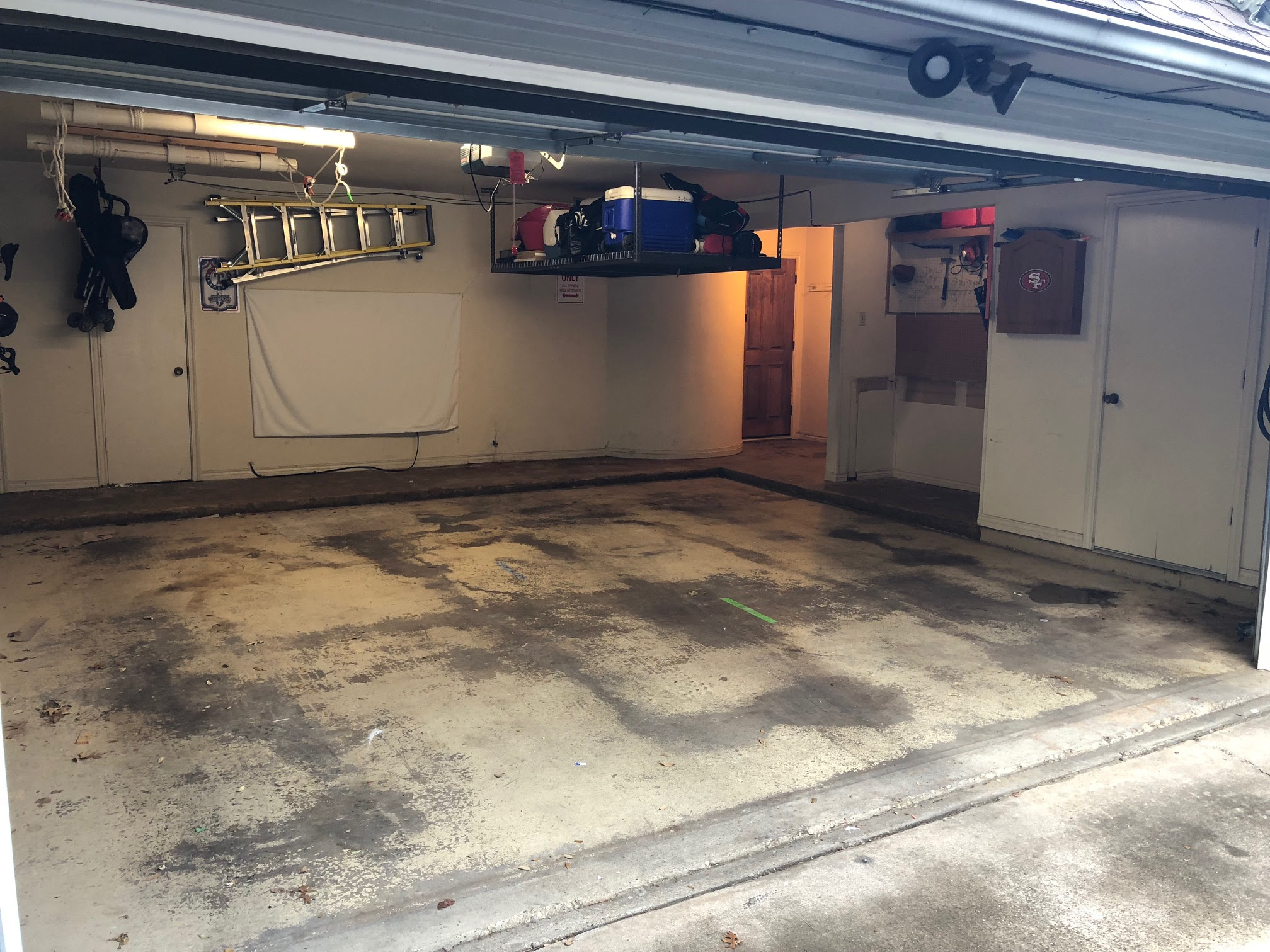 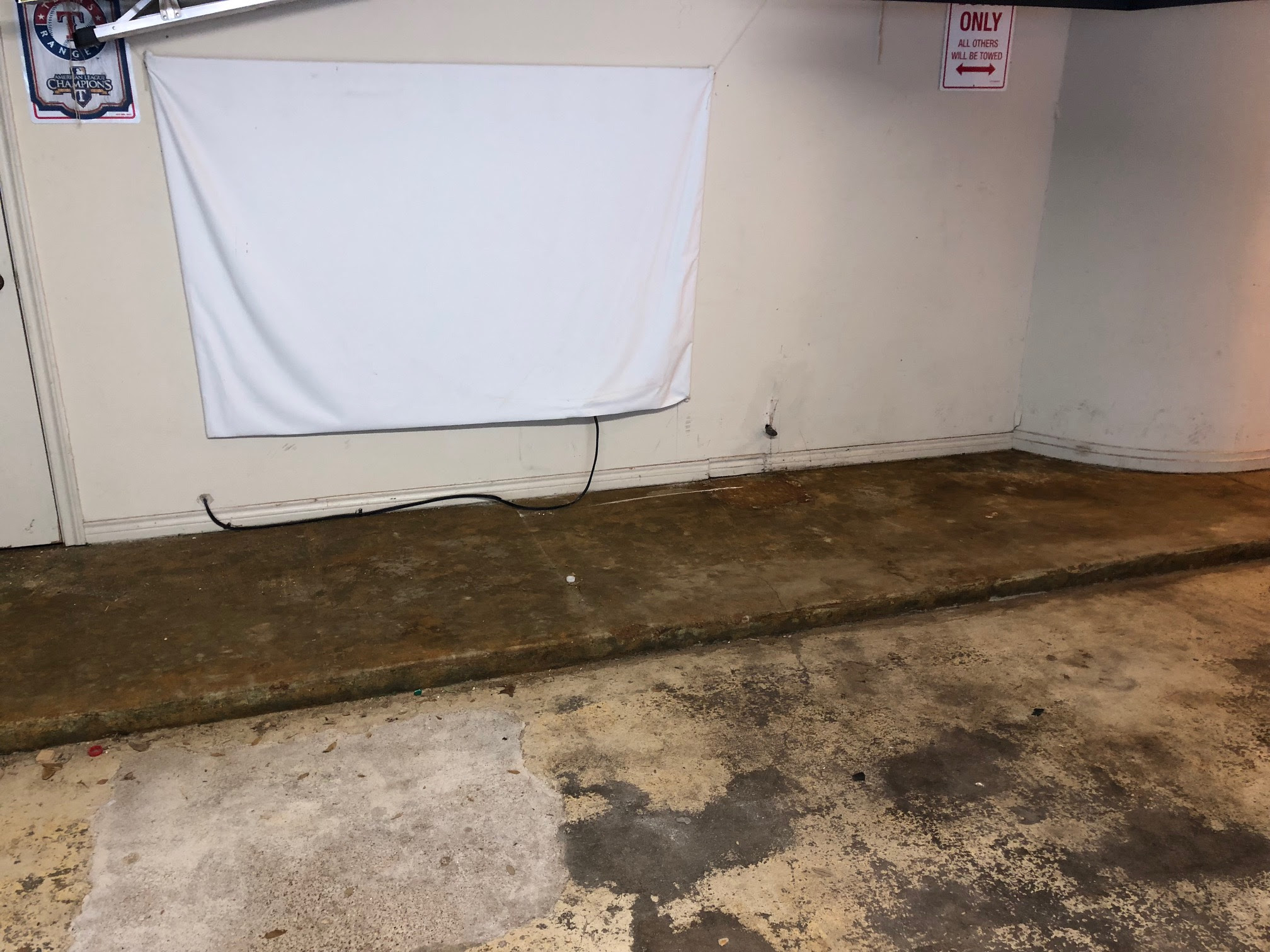 The darker portion is where the turf used to be 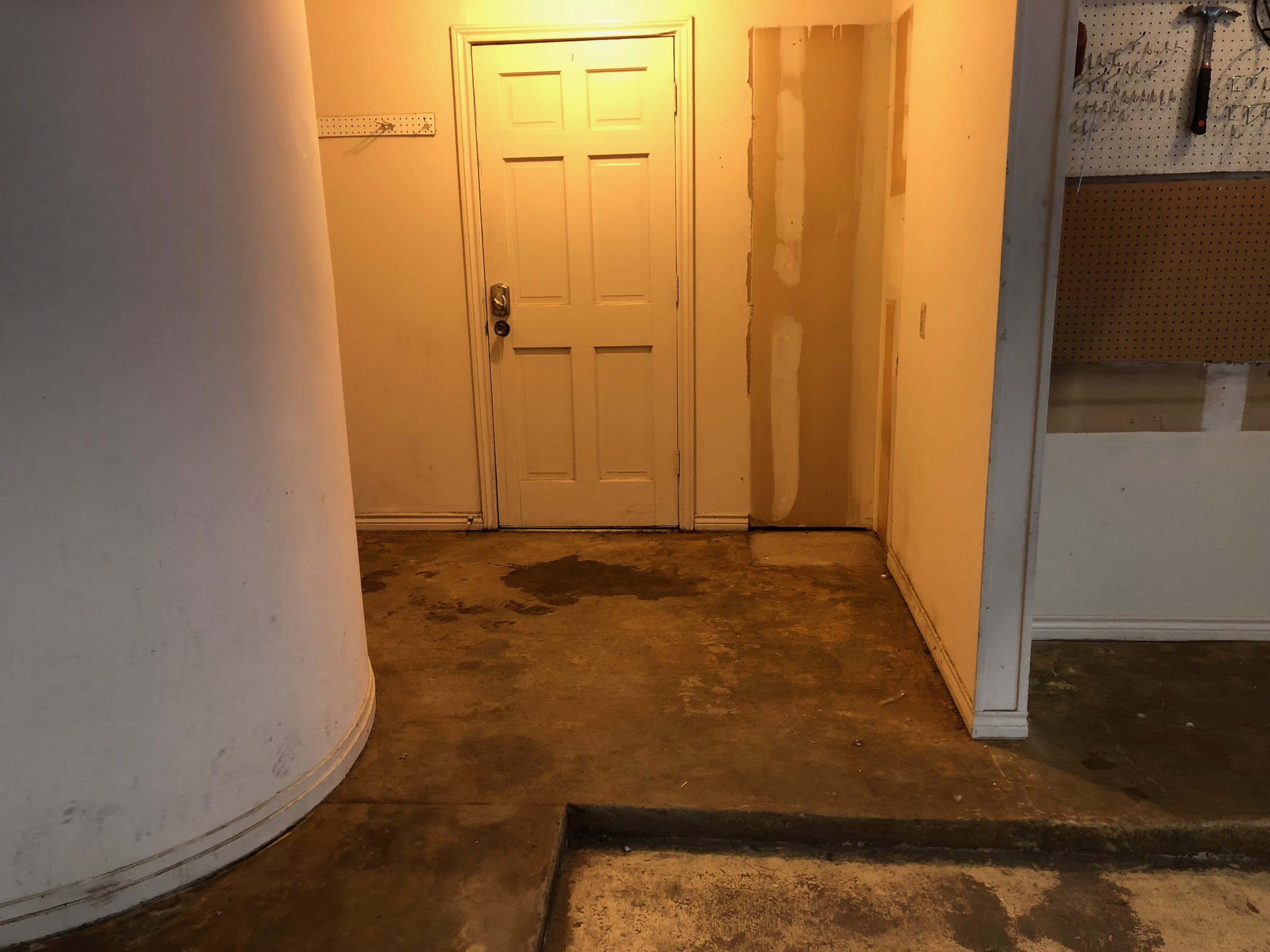 There used to be built-ins in the corner

And here is the finished product: 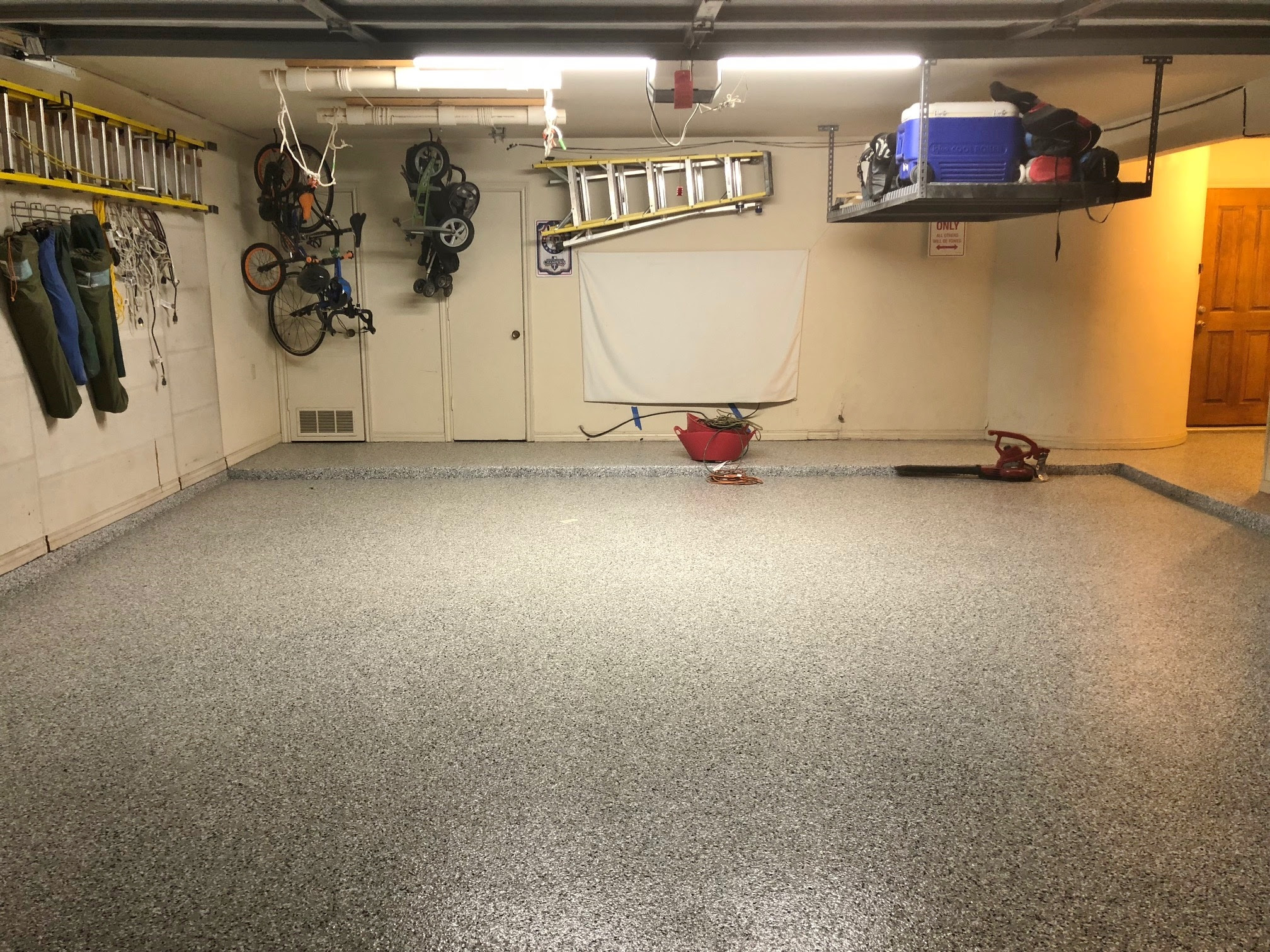 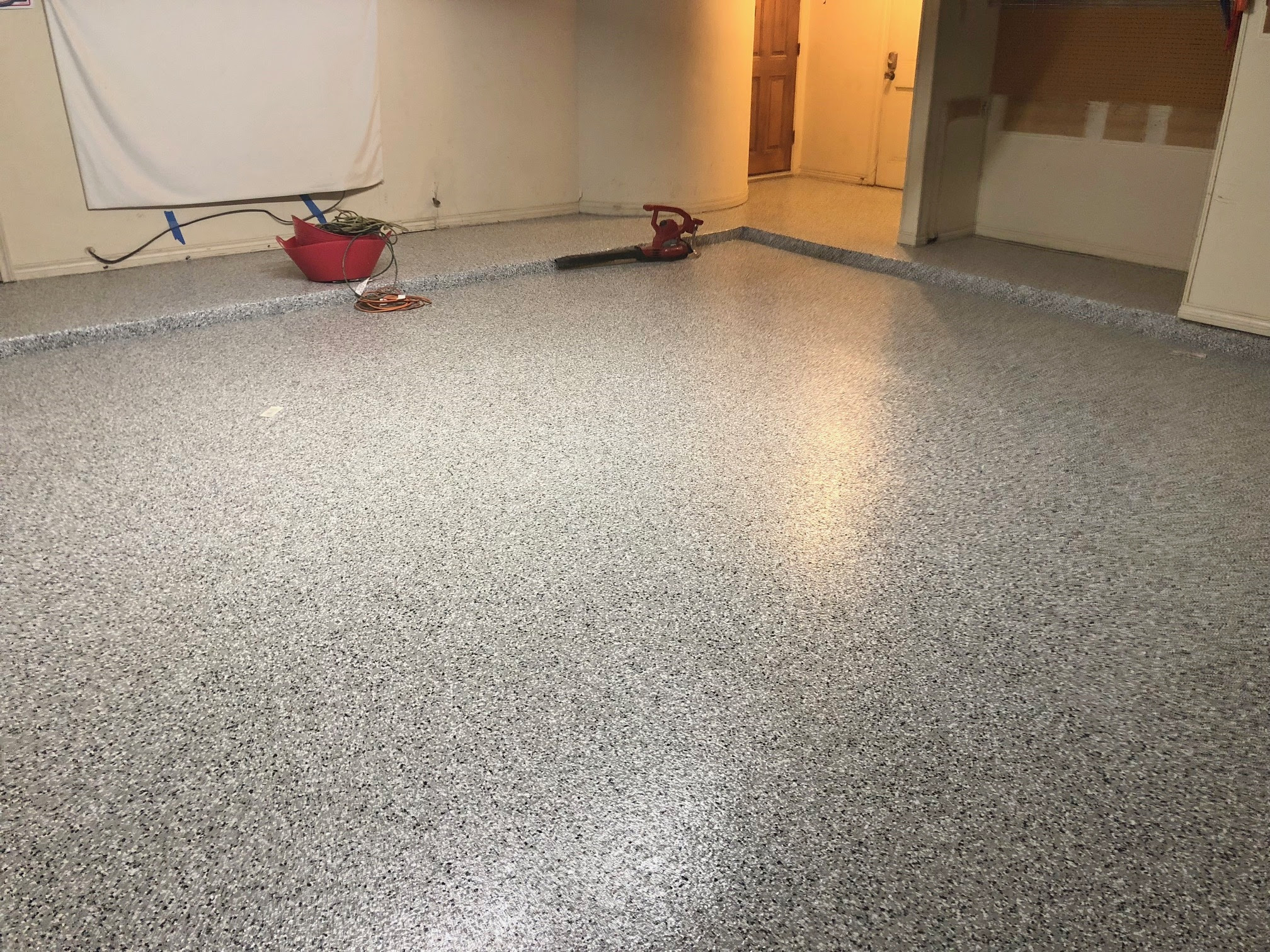 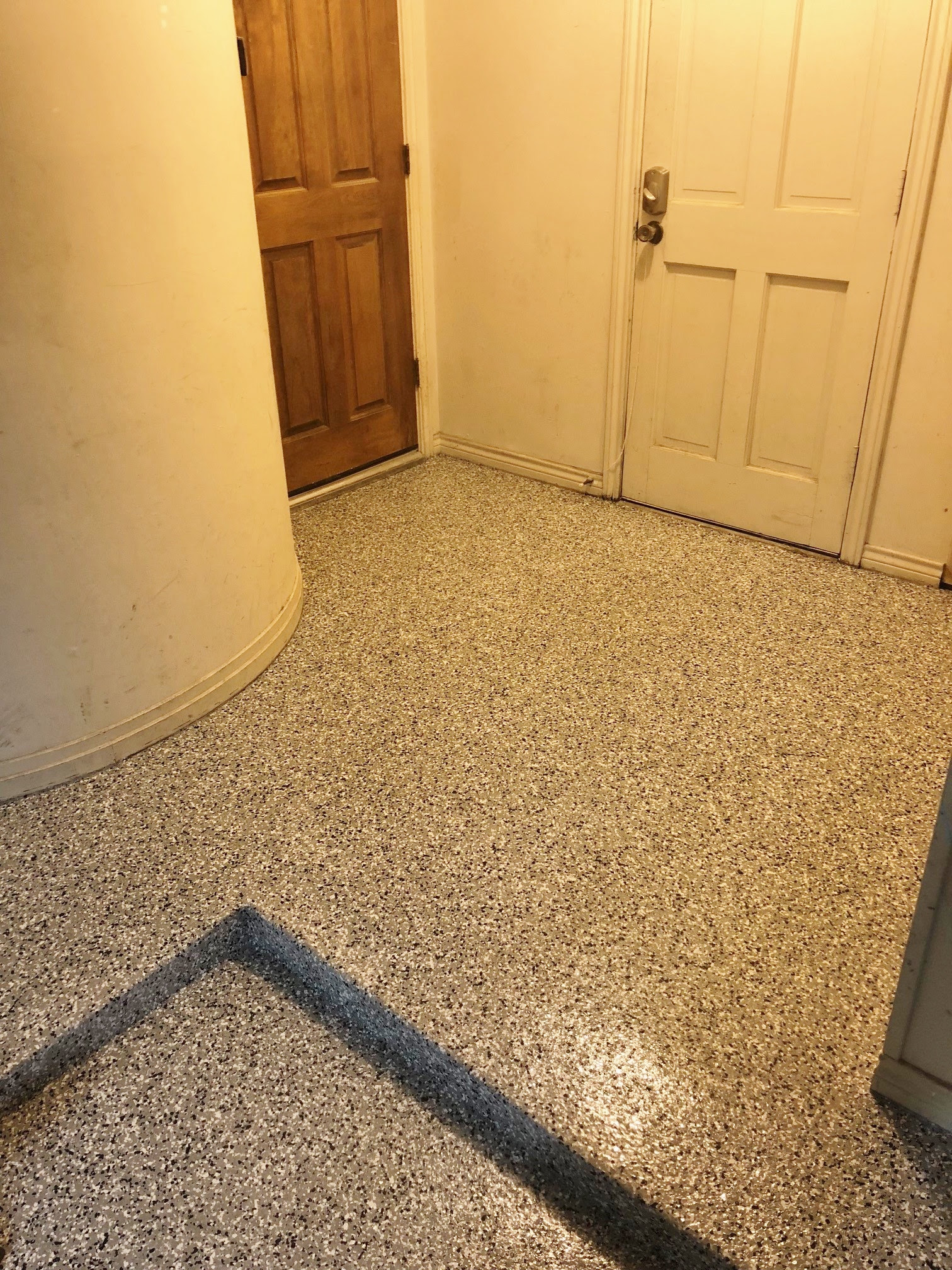 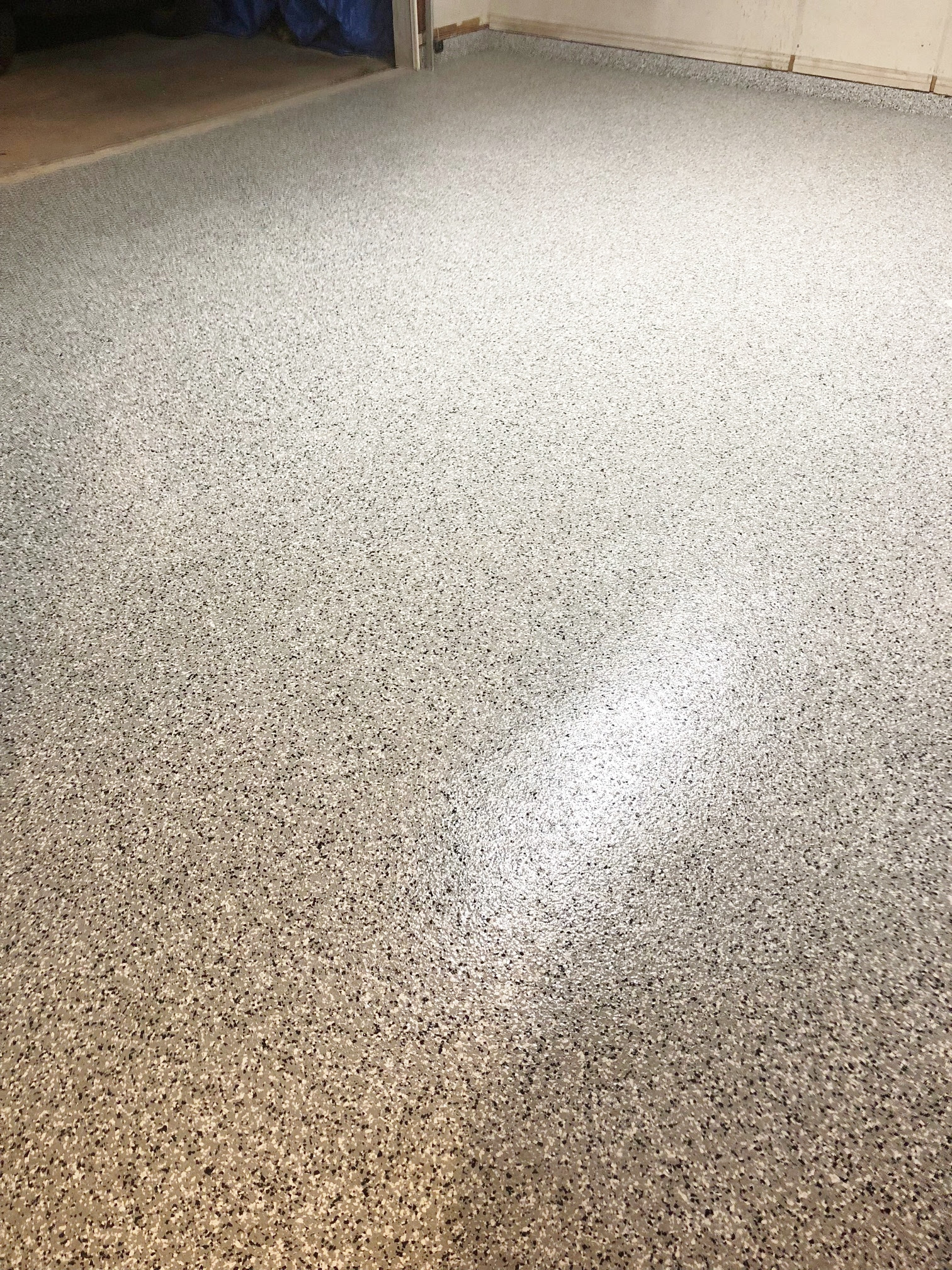 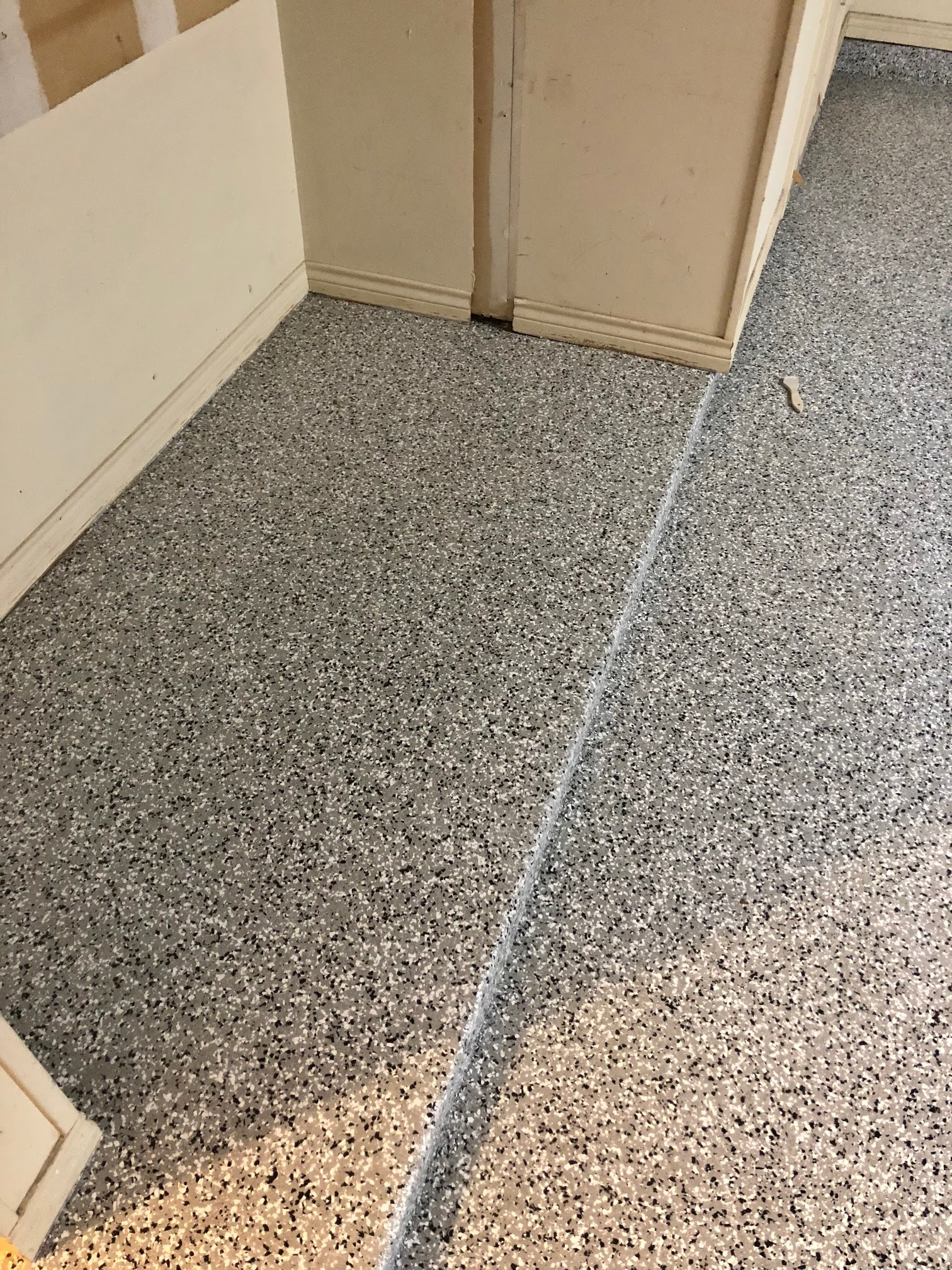 Man, what a difference! I love that replacing the flooring forced us to make other improvements. We now have most of the items in our garage inside closets, inside drawers, or hanging from the wall or ceiling. It doesn't feel cramped and it is actually pleasant to be in!