I'm now in the second week post-surgery and things have definitely improved. The feelings of despair have lessened, but I'm still acutely aware of the long road I have ahead. I wear a back brace at all times throughout the day unless I'm sleeping or taking a shower. It's rigid and constricting, as it should be, so you can imagine how comfortable it is. Whenever I am not wearing it, I have a bit of terror that something is going to happen and I'll injure myself.

When I wake in the morning, I have to ask Meezy to prepare the shower for me. I need a chair to sit on and then a stool next to it that holds my soap and hair products. Everything has to be within easy reach because I don't need to be standing and sitting over and over again. Thankfully we have a hand-held shower head so that I can control the water. If I drop something, I have to yell for Meezy and ask him to retrieve it for me. When I'm finished, I step out and he helps dry my legs since I can't bend at the waist. He also helps me put on my clothes for the same reason.

After I'm ready for the day, I try to help with the kids but there's not much I can do. I can bark directions at them, but I can't physically help with their dressing. I can do some breakfast preparation, if it's simple, but I wouldn't be allowed to pour their milk if the jug was too full (i.e. too heavy). From there, Meezy drives them where they need to go and I'm left at home to fill the hours.

My days are spent focusing on walking, sitting correctly, and standing as part of my rehabilitation. I have time goals that I'm supposed to meet and I'm not supposed to remain in the same position for longer than 30 minutes without getting up and moving around. I work on the computer or do very light tasks like paying bills or writing thank-yous. I'm not allowed to do any type of housework, which used to encompass big chunks of my day! No errands, no loading or unloading the dishwasher, no laundry, no sweeping, no yardwork, no cleaning the bathroom, etc. Some people would think they were in heaven with a restriction list like that, but I'm the opposite. I live for cleanliness and organization and knocking things off my to-do list. It's very hard to walk by a sink with dishes in it and not just want to put them in the dishwasher.

A couple times a day I have to get an ice pack and lay down for 30 minutes. My back needs rest and some comfort for the trauma I've put it through. Laying down is not necessarily comfortable, though. I'm only allowed to lay on my side with my knees bent and a pillow between them, or on my back with a pillow underneath my knees. It's annoying to have to consciously remain in a strict position when all you want to do is relax. Overnight I get restless and constantly change from my side to my back and back again. I have to move very slowly and keep everything in a line when I rotate.

I haven't started driving yet, but I hope to do so by the end of this week. I've ridden in the car a couple times to places for errands, but I've stayed in the car while Meezy gets out. Once I get some independence back by driving myself, I think my spirits will improve even more.

I've been lucky through this ordeal that I have the most self-less husband around. I literally would be lost if he wasn't by my side. After him, I've been surrounded by helpful family members and friends, offering to bring food, offering to take Dutch on play dates, offering to clean the house or buy our groceries. It's truly refreshing to see my village respond when I needed help. I love you guys so much!

The following weeks are going to be filled with much of the same - limited movement and restrictions on my activities. I'm supposed to wear the back brace for 3-4 months. It's daunting to think about how long I'll be forced to forego many of the things I would've previously done, but I know it's for a good cause and I don't want to jeopardize a successful recovery.
Posted by vanweezy at 4:39 PM No comments:

Five years ago I started having back and leg pain. I can't believe I've been dealing with it for this long. I've done physical therapy, medications, injections, and even a surgery to try and correct the problem. Some things have worked for a little while, but nothing has truly addressed the core problem - I had a degenerating disk. 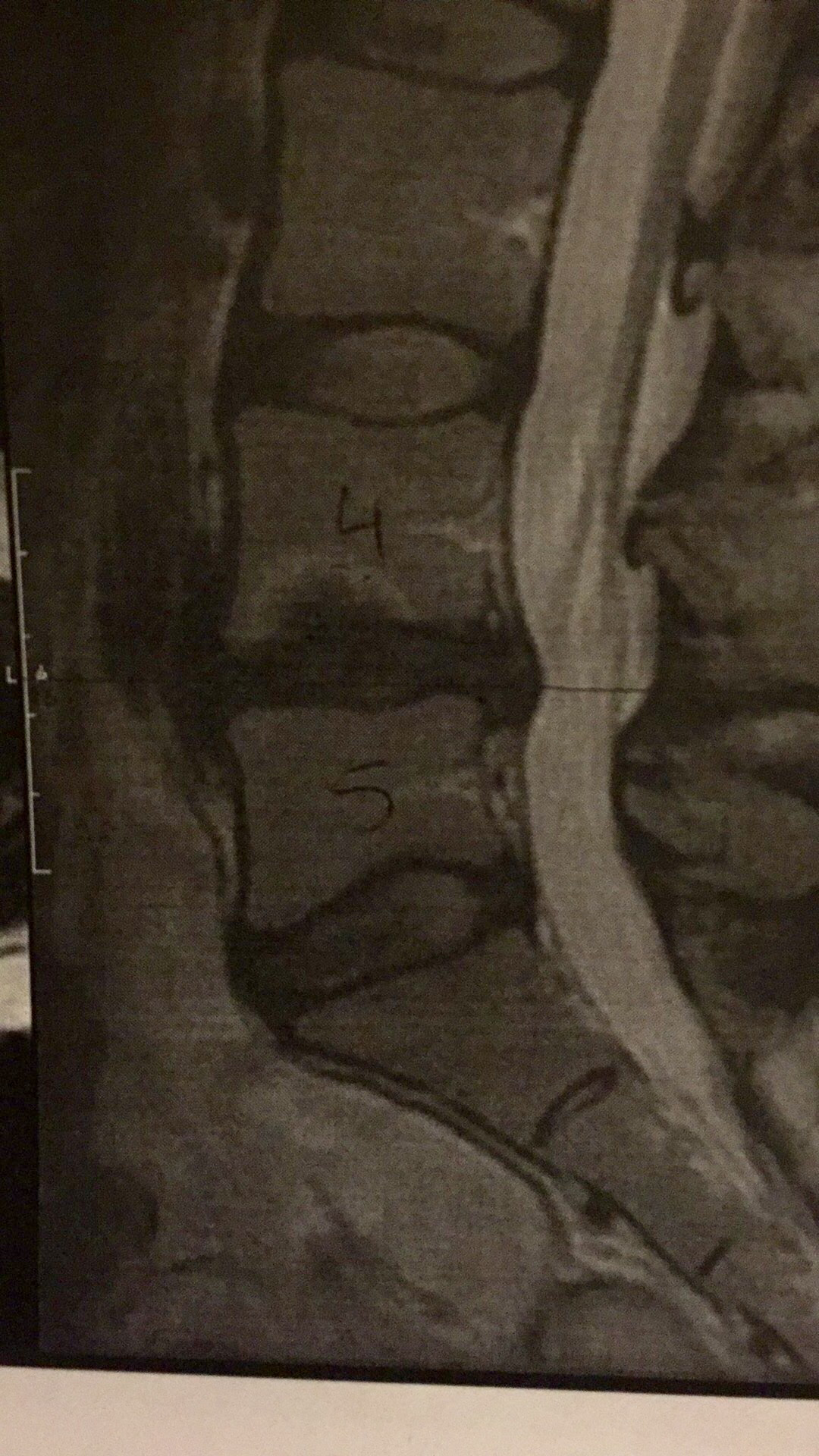 You should see a disk between L4/L5, like you do above and below it, but instead there's a crumbling mass with a herniation on the right side into my spinal nerve.

The nerve pain in my legs had steadily increased this year. I had to limit my activities and take pain medication just to get through each day. I knew I didn't want that to be my life, but the thought of a serious surgery was scary. I have a full-time job, a (more than) part-time volunteer position, and two small children. How could I just walk away from all of those responsibilities while I recover? After a lot of deliberation, a second and third expert opinion, and increasing pain, I decided I had to move forward. I needed a laminectomy and spinal fusion.

Once I made that decision, the hard part was picking the time to do it. There's never an easy time to halt your daily life as you know it. I knew the surgery would mean a few days in the hospital, 2 weeks of no driving, 4 to 6 weeks of trying not to work, and then months of wearing a back brace. I looked at my calendar and felt like there were a couple of events I couldn't miss, so I picked the next available date after that. It ended up being August 3rd.

My surgery took 4 hours and the surgeon said the herniation damage was more extensive than originally thought. So, there was essentially more trauma to my body during the procedure because of what they needed to do. When I got out of recovery, I was in immense pain. I was hooked up to an IV that could deliver pain meds every 8 minutes if I pressed a button, but it never seemed like any relief came. I cried a lot that first day and regretted my decision. They tried other pain medications but those first couple of days I could never get below a 7 out of 10 on the pain scale.

Despite my pain, I needed to try to get up and moving for my recovery, so they would make me log roll onto my side and then use my arms to try and sit myself up. It was excruciating. I would cry out in pain because it felt like I was ripping my back apart with every movement. Once I got to a seated position, my blood pressure would plummet and I would come close to passing out. I could never sit up for very long. I know what it feels like right before you pass out, so luckily I could prevent it from happening by forcing the nurses to let me stop whatever activity they were wanting me to do. I'm not sure how much they believed me at first, but luckily once they started taking my blood pressure while it was happening, they knew I was telling the truth. Laying down my BP would be fine, but as soon as I got to an elevated position, whether seated or attempting to stand, my BP would drop to a level like 80something over 40something.  It was so frustrating. While some patients might be walking by day 2 or 3, I was still trying to just sit up.

The first few days after surgery were dark and depressing. It's hard to fully explain the emotions I went through, but they included fear, anger, sadness, and regret. Couple that with constant pain and you can see why I felt the way I did. There were lots of tears and feelings of loneliness.

On day 5 post-surgery, a flip switched and my body started cooperating. I was able to sit up without my BP dropping, and that eventually led to standing. I was allowed to take a shower (with a lot of assistance), and I think it really helped. The water and the feeling of clean raised my spirits. It was the first day I wore something other than a hospital gown. My physical therapy was going well and I even walked a little (with the assistance of a walker). On day 6 post-surgery, the surgeon cleared me to go home. It's not like I was able to do anything on my own at that point, but I no longer had the concern that I could pass out at any moment. So, the responsibility of my care now fell on my husband and my family.
Posted by vanweezy at 1:12 PM No comments: