It gets a little harder to remember everything we did as more time passes from when we were actually in Paris, but hopefully the little notes I made along the way start to jog my memory!  We began day 3 with a hop on - hop off bus tour.  It took us past lots of beautiful buildings and bridges, not to mention all the quintessential Paris landmarks.  We stayed on the bus tour through its entirety (2+ hours), and then decided to stay on it as it began the route again so that we could get a free ride to Notre Dame (we were a bit tired of walking)!  The Cathedral is free to enter, so we walked around it and marveled at the interior.  There was lots of beautiful stained glass throughout, as well as a lot of areas where you could pay to light a candle (no thanks)!  The architecture and design in the ceiling and arches were just amazing.  I took a lot of pictures inside there.  After that, we stopped at a cafe for lunch.  I ordered a club sandwich, which turned out to be pretty disgusting, so my intake consisted of only french fries.  By this time, Jer and I were quite tired of the brasserie cafes.  We vowed to find something different for dinner! 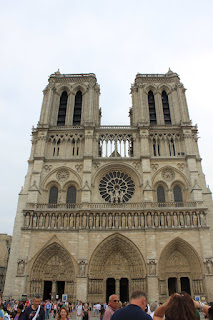 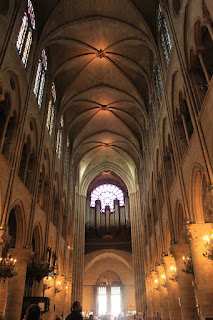 interior of Notre Dame
After lunch, we walked over to the Pantheon.  The building looks pretty neat from the outside, but I had no idea how wonderful it would be on the inside.  My jaw dropped when I entered, and I was so impressed.  It was really giving the Arc de Triomphe a run for its money.  There were beautiful floor to ceiling columns everywhere, huge murals on each wall, and a giant pendulum in the middle that showed the angle the earth was spinning.  Down below the main floor were the crypts.  They were stark and solemn.  Even if there hadn't been a sign there saying not to speak loudly, you wouldn't have wanted to.  A few people's hearts were in urns, which was rather odd.  There were some pretty famous people entombed there - Marie Curie, Alexander Dumas, Voltaire, Louis Braille, Victor Hugo (who wrote Les Mis), and Jean-Jacque Rousseau.   The building had sustained damage from wear and tear due to age, which necessitated the use of nets underneath some of the ceiling areas in case pieces came loose and fell off.  Overall though, the Pantheon was wonderful and it tied with the Louvre for my second favorite things in Paris! 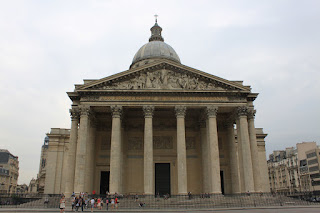 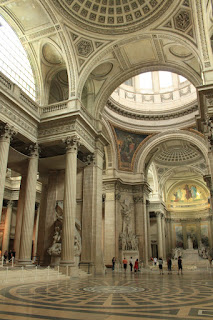 the jaw-dropping interior
We had asked for advice on where to eat our last dinner in Paris, and our friend Emily recommended a place called Fajitas.  We arrived around 9:30 that night and discovered it to be a really tiny place with no air conditioning.  It seemed to be pretty popular though, since every table was full.  They asked if we had a reservation, and we were like wow!  Didn't know we would need one at that time of night.  Luckily we only had to wait ten minutes before a table became available.  I was really excited about getting some Mexican food since our dining luck in Paris hadn't been so great up to that point.  When our waitress asked for our drink orders, we ordered margaritas and some water.  She came back with the margaritas, but no water.  We had to specifically order chips and salsa (and pay for them).  The salsa wasn't bad, considering where we were.  We asked for water again, and again no luck.  We finally just asked another waiter that happened to be walking by and he actually helped us out.  Grrr!  It sure does take a lot of work to get some water in Paris.  The food was good, but the temperature in the restaurant was pretty unbearable.  It was actually cooler outside, which shouldn't be the case!

We decided to end our last night in Paris with a walk to the Trocadero so we could try and get one last picture in front of the Eiffel Tower.  It's far enough away from the Tower so that you can really get a good shot of yourself and the full landmark.  While there, we met a couple from Australia who were celebrating their 37th wedding anniversary.  It was really cool to talk with them for a few minutes and discuss what had brought us both to Paris.  It was also a neat juxtaposition of a couple with 37 years under their belt, and Jer and I with just 4.  I'm looking forward to being on the flip side of that situation one day. 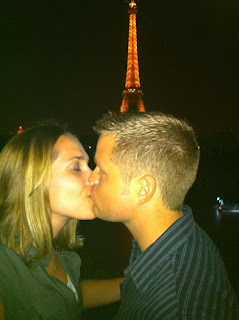 Some final thoughts about Paris:
1) There are lots of smokers there.
2) When stores have sales, they don't put mannequins in the windows with the store's clothing on them.  They put mannequins up with generic white shirts that say "Soldes" (Sale) on them.  This was everywhere.  I thought it was weird that you couldn't see what kind of clothes a store sold by looking at the mannequins!
3) People on vespas just weave in and out of traffic and pedestrians with no regard for rules or safety!
4) We encountered tons of people who spoke English....except for our taxi driver.
5) The temperatures were cooler and much nicer at night.
6) It stayed light outside pretty late.
7) Sometimes there didn't seem to be any lanes on the road, just random weaving driving.
8) The lighted monuments at night looked amazing.