The ladies (Renee, Karin, and Kim) met us at our hotel this morning so we could sight see and shop around Maastricht together.  We saw Vrijthof Square, Theater aan het Vrijthof, Basilica of Saint Servatius (we toured the treasure rooms), churches that were hundreds of years old, Town Hall, the River Maas, and lots of other amazing things that I can't remember the names of!  We dined at a riverside cafe for lunch and enjoyed the scenery and people around us.  There was a small souvenir shop near the bridge we were taking to get back to the car, so we stopped in to pick up a few things.  Jer suggested that I look through their football scarfs for an MVV one (this is the team my Opa played on), but I figured it was highly unlikely they'd have one.  MVV is a semi-pro team, and I had previously had a hard time finding any merchandise related to it online.  To my amazement, they had one!  I absolutely had to buy it so that I could give it to my Dad.  That seriously made my day! 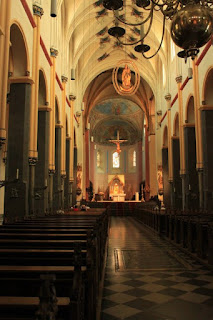 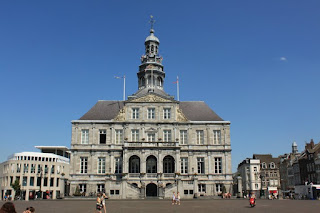 Maastricht Town Hall
After we left the shop, we saw storm clouds brewing and the wind had picked up, so we rushed back to the car.  We made it in time, but we encountered a heck of a storm on our drive back.  We even pulled over on the side of the road at one point since the visibility was so bad.  I had wanted to see the street where my grandparents' house had been, so we made our way over there in the rain.  That area now is just apartments, so I had to settle for just seeing the street!  (Professor Mullerstraat was the name of it).  Once we got back on the road and closer to Renee's house, we saw tree branches strewn everywhere.  Large trees had just snapped in half and were laying in people's yards or across the roadway.  It was crazy!  We were glad we didn't see any property damage along the way and we were thankful Renee's trees were spared. 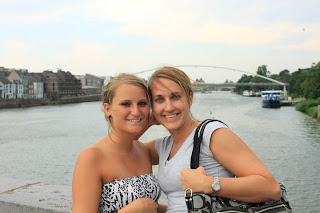 Kim and I in front of the River Maas 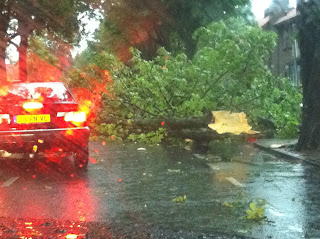 Result of the storm
We hung out at Renee's house while we waited for the rain to pass.  Once it did, we said our goodbyes to Renee and Huub, because we were heading to Germany!  We are so thankful to Renee for being a wonderful host, and we hope we get the chance to see her again someday.  From there, Karin and Kim drove us to Bergheim, Germany.  We got to see their beautiful house and meet Kim's stepdad Thomas.  He grilled out a wonderful meal for us, and we were very appreciative.  (Did I mention we were tired of cafe food???)  After enjoying dinner, a few of Kim's friends came over to meet us.  We were so flattered!  They are great girls, but a little on the shy side when it comes to speaking English.  It was pretty cute, but we totally understood how they felt about attempting to speak in a foreign language!  We tried to make them feel more comfortable by throwing out what little Dutch and German we knew, which mainly consisted of asking how you are, asking where the bathroom is, counting to ten, and a few random curse words.  Haha.  We sat around for a few hours, just hanging out and enjoying each other's company.  It was great! 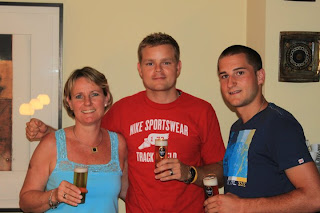 Karin, Jer, and Mik enjoying a cold one 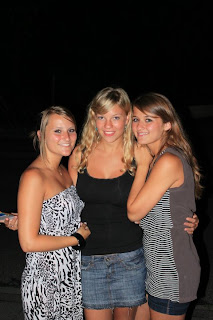 Kim and her friends, Gloria and Ari
I had the idea to skype with my sister, Jo, so Kim could see Jo's daughter, Livy, again.  They had formed a really sweet bond while Kim was living with us, and I knew she would be amazed at how much Livy had grown in the 6 months since she left.  Since the time difference is so large, we had to schedule it for 1am Bergheim time so that Jo would be off from work by then.  Livy was precious!  We had a lot of people on our side of the camera, but she recognized and pointed me out.  It was so cute.  Jo got her to say a lot of things, which was awesome because she wasn't talking much at all the last time Kim saw her.  The best part was when Jo told us she'd be going over to a friend's house to babysit their daughter that night, but that she wasn't bringing Livy with her, because she would get jealous of Jo's interaction with the other child.  Livy had been walking down the hall, listening to what was said, followed by Jo with the camera on her, and she turned around and announced to all of us in a happy voice, "I'm jealous!"