To get from London to Monte Carlo, there were quite a few hoops to jump through!  We took a cab from our hotel to Heathrow Airport (which set us back 65 pounds!).  Our flight to Nice wasn't too bad and we managed to catch a few naps here and there.  At one point I woke up and heard the passenger in front of me say, "I had to buy an extra seat for my trombone!" which prompted me to try to fall back asleep.  Once we arrived at the Nice airport, we had to board a bus to take us to the Nice rail station.  It was a short bus ride, and we actually had seats, so no complaints there.  I had pre-purchased our rail tickets online, but they were for the train leaving 2 hours from the time we arrived at the station.  So, we asked if we could exchange them for an earlier departure.  We were told we couldn't, so we bit the bullet and bought another set of tickets (which turned out to be way cheaper than the ones I had previously purchased online).  That got us on a train leaving in just 30 minutes.  We headed out to the platform to await its arrival.  Jer sat on a bench and I put my backpack next to him to save my seat while I searched for a vending machine.  When I returned to him, he told me about his first experience with a French person.  He said a lady walked up and motioned that she wanted to move my backpack.  He said "No, no" and held his hand over it.  "My wife is sitting there."  The lady said something in French that he took to mean "What?" and started to reach for it again and Jer said no again.  She made a face and said something else to him in French and walked away, while still continuing to make comments.  He doesn't know the language, but he thought her tone spoke for itself!  Maybe she thought he was lying or something?  Oh well!  We laughed about it and continued to wait for our train.  Shortly after that, we noticed that the Asian lady sitting next to us on the bench had her video camera out.  From the corner of our eyes, we saw her rotating the camera all around in every direction.  Hmmm, I guess she wanted to capture the train station in all its glory.  Then we looked closer and realized she had the camcorder pointed at herself the whole time.  She was taking 360 degree video of herself at the train station.  Wow, that'll be an interesting video for her friends and family to watch! 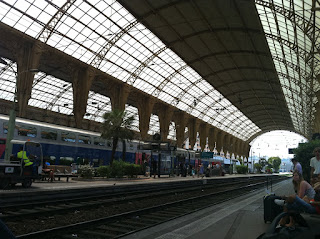 Nice train station
We boarded our train to Monte Carlo and hoped for a quick trip.  Since Nice and Monte Carlo are so close together, the ride was only supposed to take about 20-25 minutes.  We didn't realize it included 5 stops along the way, though.  That was kind of annoying since we had 2 large suitcases and 3 carry-ons that people had to maneuver around at each stop.  Our fellow train passengers were quite an interesting bunch.  There was the silver-haired crazy man who spoke to himself in French constantly; the group of 5 boys dressed in swim trunks who debated whether or not to get off at each of the intermediate stops (we figured out why later); the look straight ahead and don't talk to anybody because I've got my earphones on guy; and the Goth couple who probably hadn't showered in a few days.  Jer and I just kept our hands on our bags and hoped for the stops to pass by quickly.  After about three stops, a bunch of official-looking guys boarded the train and started demanding tickets.  The 5 boys had moved to an adjacent train and we could see them running off of it when the doors opened.  Ohhhhhh.  I get it now.  They were avoiding the ticket checkers.  Two people in our vicinity were trying to cheat the system and they received citations.

After arriving at the Monte Carlo train station, we decided we didn't feel like navigating the city streets to our hotel with all our luggage, so we called a cab.  It's so funny to me that the cabs around here are Audis or Mercedes.  Just a tad bit different than I'm used to.  All in all, our journey from London to Monte Carlo started with a cab, then a plane, then a bus, then a train, and then ended with another cab.  Whew!

We checked in and headed up to our room at Le Meridien.  The hotel is very nice and in a wonderful location.  There were lots of fancy, schmancy cars parked out front.  The view from our balcony was of the private beach below, and then looked out over the water.  We changed into our swim suits immediately, since the beach was our first order of business!  As we walked out, we stopped by the dining room to check out the menu.  Holy schnikes.  Each entree was 29euro and up ($36+usd).  The buffet was 42euro.  Hmmmm, I guess we'll worry about food later!  The beach was a pebble beach, not a sandy one, and the water was a colder temperature than what we experienced in Mexico a couple months ago.  No complaints though; it was still beautiful!  We relaxed on our beach chairs for a couple hours, just trying to stop time.  Every now and then we'd scan the area to check out the interesting people and outfits.  Yes, there were topless sunbathers.  Yes, the men in speedos were prevalent.  No, being wealthy doesn't mean you're in great shape. 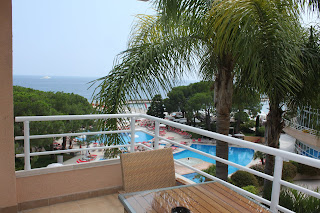 View from our balcony
After getting some good sun, we decided to head back to the room to get ready for dinner.  Jer found Le Tour on TV, and suffered through the French commentary.   He would hear the announcers getting excited about something, and throwing out some cyclist's names, but he had no clue what they were saying!  I just had to laugh.  When the day's ride had ended, we departed from the hotel in search of some cheaper food.  It was about 5:30 by this time, but we were starving since we hadn't eaten lunch.  We passed by a couple places, but found that they weren't open.  Hmmm, I guess they only served lunch.  We stumbled upon a mall and figured that would be our best bet.  There was a little Italian eatery there, with entrees from 10 - 13 euro.  That'll do!  The food was great, while our attempted exchanges with the waiter were less than stellar.  After dinner, we shopped at some of the stores.  This one shoe store had tables set up by size, with shoes strewn about them.  I figured the prices would be decent since it didn't look very fancy.  My mistake!  The prices ranged from 100 - 300 euro per pair.  No thanks!  Jeez.  We were beginning to realize nothing would be affordable in Monte Carlo.  It was about 7:30 by this time, and all the stores started to close.  Interesting.  We walked back to our hotel and saw that the restaurants we had previously seen closed were now open.  I guess everyone eats late dinners here! 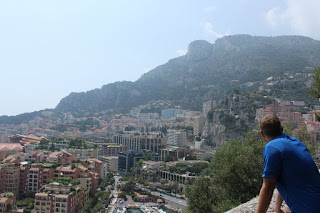 Jer looks out over the city
We changed into some fancier clothes so we could visit the Casino de Monte Carlo.  We heard there was a dress code and an entrance fee.  We went down to the valet station to request a cab since I didn't want to walk all the way over there in my high heels!  As we waited, a guy pulled up in a Mercedes.  He handed his keys to the valet and then gave him a handful of change as a tip.  When he walked away, the valet made fun of him to the other valets.  We obviously didn't understand exactly what he was saying, but we got the gist of it.  Since everything under 5 euros is change, not paper currency, there could've actually been a few euros there in the tip.  We weren't sure, but we were like crap, don't tip these guys in change.  Good to know!  We arrived at the Casino, and it was everything we'd imagined.  There were ridiculously expensive cars parked out front, and the entrance was very grand.  We paid our 10 euros each and went inside.  The design and decorations were so elaborate and jaw-dropping.  I wish I could've taken pictures.  There were very few tables in there, and only a couple of them actually had players.  I believe there were a lot of private rooms, so that might've been where all the wealthy gamblers were.  There was a small slot machine area, so that's where I headed.  Of course the minimums were high, but I had to gamble some just to say I did!  I actually walked away with more than I started with, so that was exciting.  There really wasn't much to do in that casino, since it was more of just a spectacle, so we left and headed to another one.  There are actually like five casinos in that area, but only the main one gets all the press!  The next one we went to also had a dress code (no shorts), but it had more of a Vegas feel.  There were more slots, more flashing lights, more people, etc.  I sat down at a slot machine and ordered a Sprite.  That set me back 7 euro.  Ouch!  I decided to milk that drink for quite a while.  We called it a night around 2am and headed back to our hotel.  We still saw people eating dinner at that time.  There were lots of bars and nightclubs still going strong.  We apparently need to change our timeline for the day! 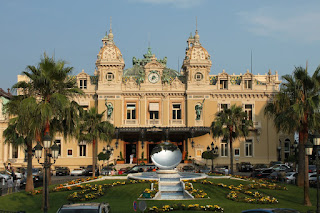 Your tips about Rail Tickets Online Bookings is really good... thanks...