We walked our luggage (which increasingly became heavier over the course of the trip) over to the Central Station so we could catch our train to Maastricht.  Lots of people were arriving to Amsterdam that day, decked out in orange, in preparation for the homecoming parade that would be taking place later that day.  We were very sad we were missing it!  They brought the Dutch team on a boat from behind Central Station, through the canal, and ending at Museumplein for a ceremony.  It looked like a pretty fun celebration!  But I digress.  Our train was nice, but not as good as the one from Paris.  It was considered an inter-city train, so there wasn't free wifi or drink service.  We got off the train at one stop before Masstricht, in Sittard, because that's where Kim's aunt Renee would be meeting us.  She drove us to her house in Geleen, where we got the chance to sit under the shade in her beautiful backyard and chat! 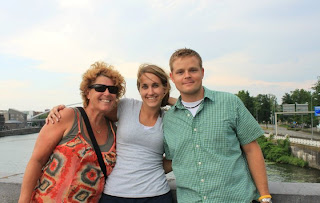 Renee, me, and Jer in Maastricht
After relaxing for a while, Renee took us to the Netherlands American Cemetery and Memorial in Margraten.  It's a WWII cemetery commemorating and honoring the American soldiers who gave their lives for liberty.  When you enter, you see a pool leading to the tall memorial tower.  Surrounding that area are two large walls called the Tablets of the Missing, on which 1,700 names are written.  The cemetery contains 8,300 burial plots, each marked with a simple white marble headstone.  I really appreciated visiting this memorial because it was an American soldier who was responsible for helping my grandparents emigrate from Holland to America.  Obviously he was not among those in the cemetery, but seeing those plots was a keen reminder of what the American service members gave to help others, some with their lives, some in other ways.  For that, I am immensely grateful. 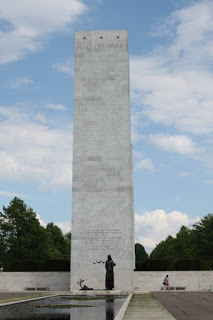 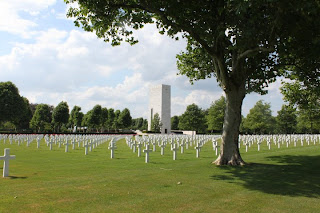 Burial Plots
From the cemetery, we traveled to meet with some of Renee's friends, who run Hotel Bergrust in the hills of Limburg.  What a relaxing place to be!  Jer and I both agreed that his mom would love a setting like that.  We sat outside on the patio enjoying the views and sympathized with the poor cyclists attempting the steep incline that ran in front of the hotel.  Jer spoke with the owner about the latest happenings in the Tour de France, so he was a happy camper. 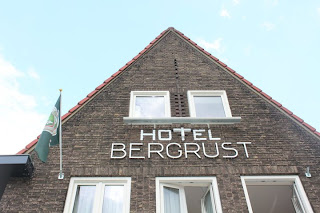 Hotel Bergrust, which sits in an awesome location
From there we headed back to Renee's house so she could begin dinner preparations.  Her son, Maarten, was home, so we had the chance to meet him.  Kim, her mother Karin, and her brother Mik were driving in from Bergheim, Germany to hang out with us that night.  We were extremely excited since we hadn't seen Kim in 6 months, and had never met Karin or Mik before!  When they arrived, it was actually funny because it seemed as if no time had passed at all from the last time we saw Kim, and it was like we had known Karin and Mik for years.  It's such a bummer that they live on the other side of the ocean from us, because I know our families would be great friends.  We sat around for a few hours, talking and drinking, and in the meantime Renee's husband, Huub, had arrived.  What a fun bunch of people!  We knew we were going to have a pretty eventful next couple of days with these folks! 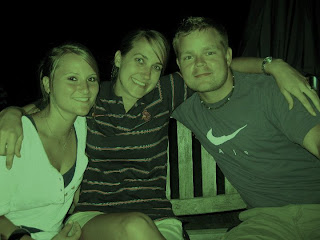 Kim and her former host parents!
It was pretty late by this point, but we needed to check into our hotel in Maastricht.  We stayed at the Hotel Beaumont.  It's a really cool hotel, but our room was small and the mini-fridge wasn't stocked.  Oh well, we were literally only staying there for 10 hours, so we couldn't complain too much!