When we arrived in Amsterdam on the previous day, a lady in our hotel lobby had handed me free tickets for a canal cruise since she didn't have time to take it.  We decided to use those tickets on our second day in Amsterdam.  It was rainy, but the boats were covered, so we figured we'd be fine.  We got on the cruise and weren't impressed.  Only some of the windows opened, so you had to sit in certain places to get any pictures.  That meant you might not be facing the right direction to see what was coming up.  You were definitely going to miss things that were on the other side of the boat because you couldn't realistically run back and forth!  The audio guide was broadcast to the entire boat, not through individual headphones, so you had to hear it in 3 languages.  We had to wait a long time at each landmark to get to the English commentary and figure out what we were looking it.  It was a pain.  After about 10 minutes, we decided we had had enough.  We got off at the next stop and decided we'd rather walk to each place and at least get some better pictures.  We spotted a Hard Rock Cafe in the distance and immediately craved comfort food!  We were so relieved to go to a place that gave free refills!  Haha.  As silly as it may sound, you really do miss having them. 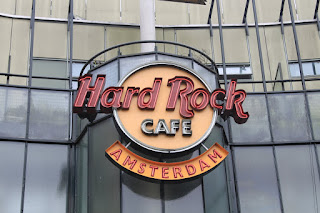 After that, we attempted to visit the Anne Frank House.  Even in the rain, the line to get in was all the way around the block!  Bummer.  We were really looking forward to going there.  Instead we visited Dam Square and did some souvenir shopping.  We also visited a shop that sold Delft (hand-painted blue and white pottery) items.  If you've ever been in my house, or anyone in my family's house, you've probably seen a lot of these types of items!  After that we headed towards a shopping mall and Jer got a nice little present from a bird along the way.  Yeah, that just happened.  It was bad.  It was on his hand, a little on his head, and all down the front of his shirt.  He had to take off his shirt and carry it with him.  Bummer!  Luckily he was a good sport about it, and we just went to H&M and found a cheap shirt he could wear the rest of the day.  We also picked up some more Holland gear at a Nike store.  It starting pouring rain again, and the shops were closing.  Most of them closed at 6:30 on Mondays.  It was weird!  There was a cafe on the top story of the mall, which advertised air conditioning, so we went up there for a few minutes to escape the rain and enjoy the views.  When it subsided some, we headed back to our hotel. 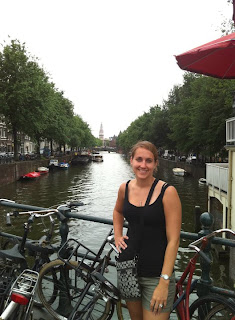 I forgot to mention the air conditioning fiasco in my previous post, so let me tell you about it now.  We got back to our room and put the room key into the slot that would allow the lights and power to work.  There was a white dial on the wall which could be turned towards heat or cold, and then a button that you could push to increase the fan strength.  We of course turned it towards cool and put the fan on the highest setting. We sat there for a few minutes and didn't feel any change.  We didn't hear a fan blowing and couldn't feel cold air coming from anywhere.  Darn it.  I called the front desk and said, "I think our air conditioner is broken."  They responded, "We don't have air conditioning."  What??  I said, "What am I adjusting on the wall then, that has a temperature gauge and a fan setting???"  They said, "Oh, that's climate control.  It just helps cool the room a little."  You've got to be kidding me!  I couldn't believe how expensive this hotel was, yet they didn't have air conditioning.  And the climate control was a joke.  We never felt any change from using it.  Sweat city, here we come!

Because of the weather that day, we just decided to order room service for dinner and start packing for our trip to Maastricht.  A while later we heard a crash in the hallway and thought, "Please don't let that have been our dinner."  A knock on the door...yep, it was ours.  Darn it!  The employee had dropped Jer's burger and it went everywhere.  My salad was safe, so he went ahead and dropped it off.  He promised he'd return with a replacement burger.  I started eating my salad and it was quite disappointing!  The chicken on it looked old, like the salad had been prepared a long time ago.  When the employee returned again, Jer's new burger was undercooked.  What a disaster!  Considering the hotel was expensive and supposed to be pretty nice, we were less than impressed.  We looked forward to a better time in Maastricht! 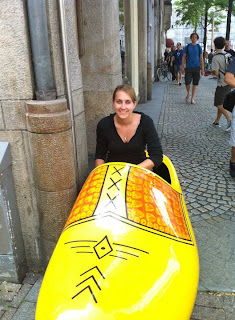