We took a cab to Gare Du Nord in Paris so we could catch the train to Amsterdam.  Our French taxi driver was hilarious and he kept us entertained, joking about how bad France was this year in the World Cup.  We were getting more and more excited since this day was the final game between Holland and Spain.  When we arrived at the station, we checked out the big board and saw that our train was on time.  It was one of those boards with the flipping letters, not an electronic one.  Call me nerdy, but I thought that was pretty neat since I'd only ever seen those in movies.  As we were waiting for our train, we were approached by several gypsies.  They would ask if you spoke English, and if you said yes, they would hold up a card written in English asking for money.  Each of their cards was exactly the same.  It got rather annoying, so we quickly changed our answer to "No" when asked! 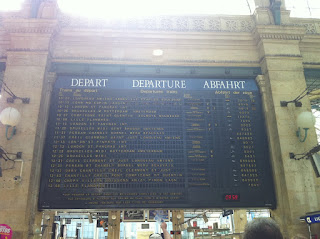 The flippy letter board
We boarded the train and immediately felt at ease about our 3 hour trip.  The seats were comfortable, they had a foot rest, there was lots of room, there were outlets available for our electronics, there was free Wifi, and the food and drink service was constant.  This was definitely the way to travel!  Before we knew it, we had arrived in Amsterdam.  As soon as we got off the train, we could feel the excitement in the air.  Everyone around us was sporting orange, and the vuvuzelas were in full swing.  We headed out from the central station and walked towards our hotel.  It was a very short distance away, so we didn't mind walking it with all of our luggage.  We stayed at the Grand Hotel Amrath Amsterdam.  That hotel is very English-friendly, so that was comforting.  We opened the door to our room and were very impressed.  It was quite large and the floor to ceiling windows were neat.  And did I mention that everything in the mini-bar was free?  Jackpot.  I love hotels like that. 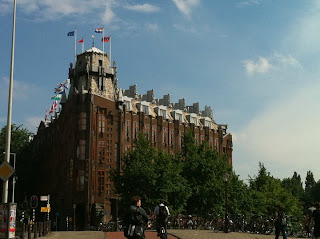 Grand Hotel Amrath Amsterdam
We quickly dropped off our luggage and headed out to check out the town.  We walked up and down the streets lined with stores, coffee shops, and restaurants.  It was quite weird to smell weed constantly, but that was to be expected in that city!!  There was definitely a buzz in the air, (irrespective of the drugs!) as everyone was preparing to watch the game.  We stopped at a small cafe and ordered a pizza and a doner kebap for our late lunch.  Then we headed back to the hotel to get into our game gear and get directions for where we needed to walk to watch it.  I decided to only bring my point and shoot camera since I didn't want to lug around the SLR with its long lens and heavy body.  We also put on tennis shoes because we knew we'd be surrounded by hundreds of thousands of people in a fairly dirty environment! 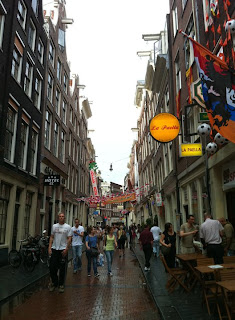 Amsterdam
The Museumplein, where the game was being shown on four large screens, was a little less than 2 miles away from our hotel.  We had seen aerial pictures of it during the semi-final game, and we knew we were in store for mayhem.  We walked over there and the crowds started getting larger and larger as we got nearer.  We stopped at an outdoor bar and grabbed some Heineken.  When in Rome, right??  We could see the area that had the best view of the big screens, and it was completely packed with people.  We weren't even that close to it, and it already had become a situation of shoulder to shoulder with little room to maneuver around.  We struggled through that for about ten minutes, making little progress, so I held my camera up above my head and took a picture of our goal location.  We thought maybe it was worse where we were at because it was near concession stands and the bathroom.  We were wrong.  Jer and I looked at the picture and knew there was no hope.  It was shoulder to shoulder for as far as my camera could see. 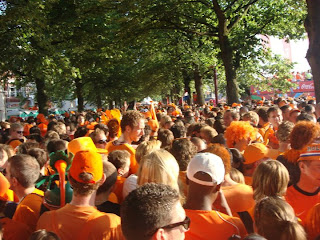 A tad bit crowded
We bailed from that area and decided to try another approach.  We went completely around the Museumplein and tried to come back into it from the other side.  We could at least walk a little more freely in that area, but we were very far away from the big screens.  We could vaguely see them if we stood on our tip toes, and we figured that was probably the best we were going to get.  There was still an hour until game time, so we had plenty of time to soak in our surroundings.  Everyone around was in such a jovial mood, and there was an awesome sense of camaraderie.  Lots of songs were sung in unison (none of which we knew the words to), helicopters dropped confetti, orange smoke bombs were set off, people held up lit flares, and vuvuzelas were rampant.  One Dutch guy near us thought we spoke his language, so he constantly said things to us, laughed and made jokes to us, etc, none of which we understood.  It was greatness.  He had no idea.  Another guy near us determined that his vuvuzela was not sufficient enough, so he attached it to a long piece of piping, which was then attached to another vuvuzela.  It was quite comical. 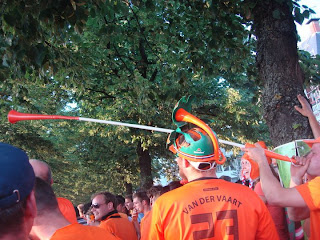 Best. Vuvuzela. Ever.
As it got closer and closer to the game's start, the excitement really started to grow!  When it showed the Dutch team entering the field, the crowd around us went crazy!  Based on that reaction, Jer and I were stoked about what would happen whenever the Dutch scored.  Even though our vantage point wasn't that great, we vowed to stick it out until the first goal happened, so we could celebrate with everyone around us.  And then the game started.  15 minutes in.  No goals.  30 minutes in.  No goals.  Crikey!  It was pretty nerve-wracking, and we were very anxious for something great to happen.  Once it got to be half-time with no goals scored, we decided we'd rather just go to a nearby bar so we could see the action close-up, and sit down!  We found one with just a few people in it, so we got good seats near the TV.  As much as I wanted to be a part of the huge crowd, we were relieved to actually be able to see what was going on.  And in hindsight, considering the result, it was a good decision on our part!  We finished out the game there, with all the highs and lows (and kicks to the chest!), and were pretty bummed when it was all over.  We were so glad to have been in Amsterdam on such an exciting day for the country, but sad that we couldn't celebrate a big win for the Dutch.  I'll never forget that day though, and I'll always say Hup Holland! 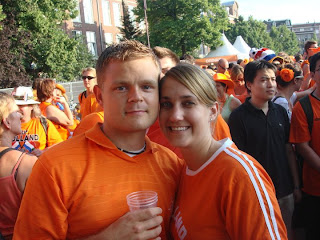 Me, Dutch by genes, and Jer, Dutch by marriage!
Posted by vanweezy at 12:00 PM