We started our second day in Paris with a trip to the Louvre.  It was a sizable distance from our hotel, but we decided to trek it on foot anyways.  Near the Louvre, in the Place de la Concorde, is the Luxor Obelisk.  It was given to the French from the Egyptians almost 200 years ago.  It's covered in hieroglyphics and stands 75 feet high. 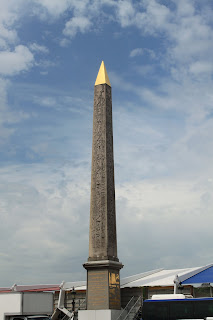 From the Obelisk, we continued on towards the Louvre.  I saw a little stand selling crepes, and I figured I should try one out.  I got a chocolate one, and the only good thing about it was the Nutella.  I didn't like the crepe surrounding the chocolate at all!  Bummer.  To top it off, there were more annoying street peddlers outside the Louvre area.  I guess you can't really escape them at anything considered a tourist spot!  But more importantly, I had no idea how massive the Louvre really was.  It's like a compound!  Take a look: 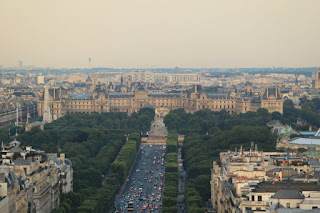 The Louvre from a distance, with the obelisk in the center of the shot
The facade is intricately detailed and very visually appealing.  There's a really neat glass pyramid out front, which is used as the entrance. 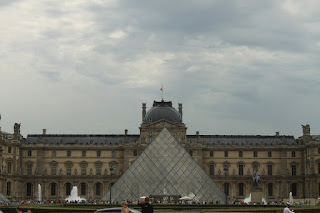 Entrance to the Louvre
When we got inside and looked at the map, we knew we wouldn't have time to see the whole museum!  It would probably take many hours to fully appreciate it.  We picked out the areas we thought we'd find most appealing, and focused on them.  Some of the highlights were the Venus de Milo, the crown jewels, the Great Sphinx of Tanis, the Mona Lisa, Winged Victory, and a room full of Michelangelo's work. 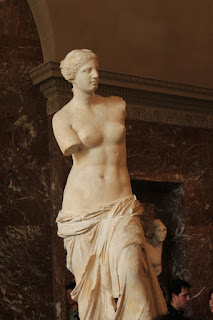 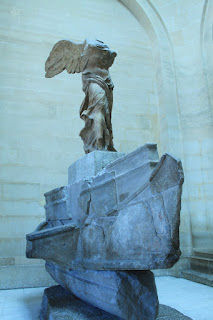 Winged Victory
We went from room to room to room!!  Of course we were amazed at the works contained there, but also at the ceilings and walls.  Some of them would make your jaw drop. 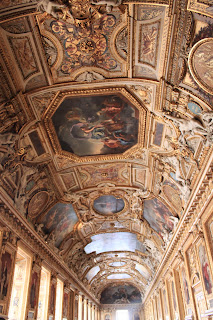 Elaborately decorated
I know we didn't get to see it all, but what we did see really was worth every penny.  If I ever make it back to Paris, I wouldn't mind making another trip to the Louvre.  It really was THAT good.  After we left the museum, we headed over to a nearby shopping district.  We ate at a cafe that gave us a 6.50 euro bottle of water when we asked for tap.  Grrr!  The shops in the area were hit or miss as to whether they had air conditioning.  We found an area of department stores and spent a lot of time there.  Some of them were 7 stories high!  Talk about a mega-store.  One store we visited had an entirely separate location for men's and women's, where you had to go through an outdoor breezeway to get between them.  We needed a break from all the walking and heat, so we found a snack area to hopefully give us some relief.  I went over to what I thought was a refrigerated drink cooler, but I was wrong.  It looked like one, but none of the drinks were cold!  What the heck, people?  It's hard to find cold drinks anywhere in Europe, it seems.  I grabbed some warm drinks and headed to the cashier.  I tried to hand her a ten since the total was 6-something and I didn't have any small change.  (If I had, I would've used a 5 euro bill and then a 2 euro coin).  I could see she was wanting me to use change, but I told her I didn't have any.  Apparently she didn't want my ten, so she reached into the wallet I had in my hand and pulled out two fives instead.  Umm, excuse me?  A little forward of her, in my opinion.  Whatever!  Just give me my crappy warm drinks.
After our brief respite, we continued shopping.  I had decided before we even left for Europe that I would buy some shoes in Paris.  I hadn't seen anything appealing up to that point, but then we came upon a Christian Dior store.  Sweet heaven!  They don't sell cheap shoes, but surprisingly the prices were much better than what I've seen in America.  I picked up two beautiful pairs and considered those my splurge items for the trip!  Sometimes you just have to ignore frugality and live a little.  They're going to hurt like heck when I wear them, but beauty is pain!  We found a United Colors of Benetton store that was going out of business, so Jer picked up a couple of nice dress shirts for way cheap.  Not sure how we're going to fit all these purchases in our luggage, but that's not important!  Before we left the shopping area, we saw a sign that said foreign visitors could get a tax refund.  The VAT charged on purchases is only supposed to be charged to residents.  We went through the process and got our refund forms.  We're supposed to get a stamp at customs at the airport and then mail in our forms to get the tax back.  We'll see how that turns out! 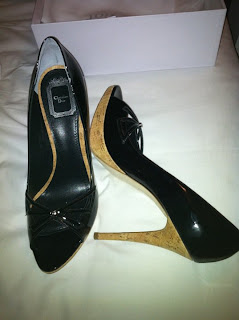 One of the new pairs
After shopping, we did a little more sightseeing.  We saw L'Opera, the National Assembly, and the Magdalena church.  One thing we noticed was that there are TONS of crosswalks.  The streets are laid out in such a way that sometimes you have to take 3 extra crosswalks to get to the street you want because the intersection is just a large circle with no direct route across it.  That's what we needed - more walking!  We also dealt with streets that branched off and changed names.  It was like a fun little game to try to figure out where we were on our map!  Haha, it's all part of the experience.  Another part of that experience is dealing with stinky smells in lots of places.  We'd be walking along and both scrunch up our noses and wonder if we just walked through a sewage treatment area.  I guess major cities with a bajillion visitors in them will all suffer from that.  At one point, I toyed with the idea of using a public toilette because it seemed like businesses either don't have one for public use or only let you use one if you make a purchase.  I quickly decided against that after peering inside.  Disgusting! 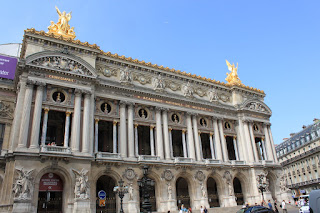 The Opera
We needed a little change of pace from the stinky and the dirty, so we stopped into a Godiva shop.  Good decision!  We had a delicious chocolat au lait shake.  Maybe Paris wasn't so bad after all!  We headed back towards the hotel and had to walk by the Eiffel Tower again.  We saw that the local police had shown up, and all the street peddlers went scurrying.  That gave us insight into why they lay out all their souvenirs on a large towel.  When they need to leave in a hurry, they just grab the four corners of the towel and scoop everything up in their makeshift bag.  Run, peddlers, run!
Posted by vanweezy at 3:11 PM