We decided to actually get up at a decent time on our last day in London so we could experience as much as possible before leaving.  We ate breakfast at our hotel before starting our day and were surprised to see beans being served.  Beans at 10am?  No thanks.  Apparently that's a normal British occurrence.  After breakfast we headed towards Vauxhall station to catch the tube to Trafalgar Square.  On our walk there, we heard loud music and as we got closer to it, realized that it was a nightclub.  We could see it full of people, still going strong at 10:30am on a Sunday morning.  Wow.  Kudos to those guys for having that kind of dedication to partying!  When we got to Vauxhall station, we found the line we needed and waited for our train.  A girl walked up to us and asked us if the train went to a particular destination.  We assured her that it did (in our noticeable American accent) and she responded in her British accent, "I live in this city and I don't even know where it goes!"  Score one for the American Meezys giving directions to Brits in London!

The purpose of our train ride was to go to the Original London Sightseeing Tour company to buy tickets for their hop on - hop off bus tour.  We knew we needed a little help getting around to all the tourist attractions quickly since we weren't going to be in London long.  This tour was excellent, and really gave us a great overview of the city.  Some of the sights we experienced were The National Gallery, Nelson's Column, Trafalgar Square, Hyde Park, Speakers' Corner, Buckingham Palace, Westminster Abbey, Big Ben & Parliament, St Paul's Cathedral, Monument, Tower Bridge, and The Tower of London.  We had a live tour guide who gave us lots of great history about each location.  I took a billion pictures because I just don't see things like that everyday!  I think my favorite sights were Nelson's Column (the giant monument in Trafalgar Square of a column with Admiral Nelson standing atop it) and the Tower Bridge (looks like something out of a fairytale). 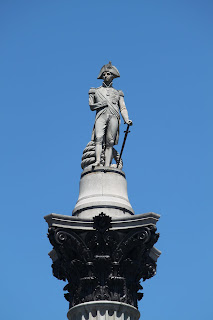 Nelson's Column (it's way more ginormous than this,
but I couldn't get the height all in one shot!) 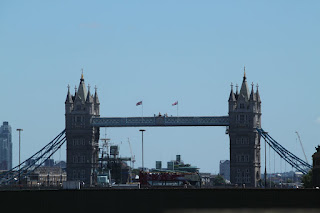 Tower Bridge
After our sightseeing, we decided to eat at a restaurant near Trafalgar Square.  It had caught our eye while on the tour because of its name - Texas Embassy Cantina.  What???  Of course we had to check it out!  We walked in and were pleased to see so many Texas references.  And what better day to eat there than July 4th!  They informed us that patrons showing a Texas driver's license would get a free margarita.  We obliged!  We enjoyed our lunch, served to us by a waiter dressed as Davy Crockett.  Jer's meal came with french fries and at one point he pointed to them and asked me if I wanted any "chips."  I looked at him in shock.  He didn't even realize he had said it!  I guess those British sayings were rubbing off on him.  We walked around the restaurant after eating and smiled about all the Texas memorabilia we saw - a Dallas Police Department patch, a Texas Tech license plate, Texas driver's licenses, etc.  It was so funny to see that on the other side of the world.  We grabbed a sharpie and added our names to the wall of visitors.  It was a great experience! 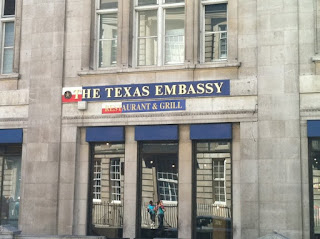 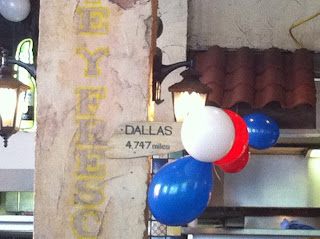 Just a little ways from home...
After lunch, we headed over to Oxford Street to do some shopping.  There were tons of places to go, and we stopped into a few.  Jer picked up a couple shirts at Zara Men, and I grabbed a travel straightener at a department store (since I fried my other one).  We also had our first experience with a pay toilet.  It was everything we expected it would be.  We were pretty exhausted from all our walking, so we decided to call it a night.  On our way back from Vauxhall station, we were fortunate enough to see a pizza delivery guy on a vespa get his pizzas stolen from him by a group of teenagers.  How nice of them!  We quickened our pace back to the hotel after that!  The rest of the night was spent packing and going over our travel plans for the next day.  London - we enjoyed meeting you!  Monte Carlo - here we come!

My final observations about London, continued from the Day One post:
1) Our normal-sized tips by American terms were regarded as very generous by the British.
2) Traffic lights flash from red to yellow before turning green.
3) Too many people think it's okay to wear white see-through pants/shorts/skirts with inappropriate undergarments.
4) We definitely think they could stand to have more trashcans around, especially in the Tube.
5) It was really hard to navigate once you were off the Tube.  If there were street signs (like we're used to), the writing on them would be extremely tiny.  There would sometimes be one pointed in the direction where two streets branched off, leaving you wondering which it referred to.  Sometimes there didn't appear to be any signs designating where you were.  Other times, there would be a sign on a building pushed back from an intersection telling you the street name, which does you no good when you're in the middle of a block trying to figure out which direction you should head.  You pretty much had to just choose one way and wait to get to the intersection to see if it was correct.
6) Tax (if any) was already included so you always knew exactly how much something was going to be before getting rung up.
7) In America, we drive on the right side and walk on the right side.  Since cars drive on the left side in the UK, we assumed the people walked the same.  But, since there were so many foreign tourists there, it was a crapshoot as to which side people should walk.  There was constant switching back and forth with each new group of people you approached.
Posted by vanweezy at 7:07 PM