We have a lot to cover!  Jer and I boarded our 9 hour flight to London full of excitement!  We put our carry-ons in the overhead bin and waited impatiently for all the other passengers to get situated.  One guy near us needed to put his bag in a bin and chose the one Jeremiah's was in.  He apparently had no regard for the possibility that Jer's bag might contain something valuable or breakable and just started manhandling it and shoving it around, trying to make his bag fit.  We watched that for a few seconds, convincing ourselves that he would stop or get it figured out, but no luck.  Finally I stepped up and put an end to it!  C'mon people, other people's stuff is important too!  We were hoping this wouldn't be a foreshadowing to how our trip would go.

Our plan was to sleep as much as possible on the plane since we had departed at night and would be arriving in London the next morning.  Jer followed the plan; I did not.  I just could not find a comfortable position and maybe got 1 hour of sleep total!  Bummer.  A movie, a couple of TV shows, and some games on my personal TV monitor luckily helped me pass the time.  The 9 hours actually went by fairly quickly, but I knew I would pay for the lack of sleep later!  We got held up outside of London and were put in a holding pattern for a while, though.  It wasn't for very long, but since the flight path is shown on our TV screens, it looked pretty comical. 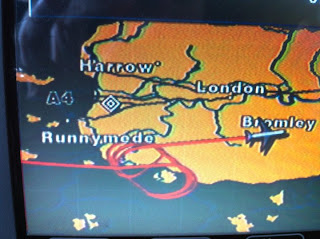 Our pilot was showing off
We deplaned and headed for the Tube.  We were apprehensive, having little experience with this type of public transportation.  We bought our tickets and headed to the platform.  A train was leaving right then, but we would've had to run to it.  We weren't sure where it was going, so we got cold feet.  After it departed, we saw that it was in fact going to the right place.  We had to wait 30 minutes for the next one.  Boo!  That's what we get for being amateurs. 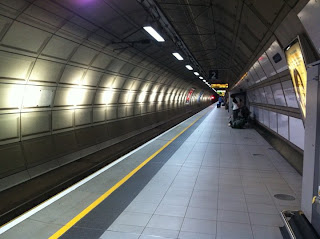 The Tube - it can be intimidating!
The tube let us off at a stop that was still a little ways away from our hotel, so we decided to take a cab for the remainder of the jaunt to avoid hauling all our luggage down the street.  The cab driver was really sweet and talked to us about our plans.  We told him we were going to Wimbledon and then listed the remaining cities on our itinerary and he asked us if we had won the American lottery.  Haha.  That made us get even more excited about what lay ahead for us!  We arrived at our hotel and were very happy with the location.  We found out the room we booked didn't have a view of the Thames, so we upgraded to one that did.  Not only could we see the river from our window, but also Parliament!  Very cool.  We unpacked all our stuff and I realized that I forgot to ask the front desk if our Wimbledon tickets had been delivered.  I crossed my fingers and made the call.  Success!  The tickets had been delivered, as promised.  I rushed downstairs and collected them.  I had been waiting to get those puppies in my hand for weeks! 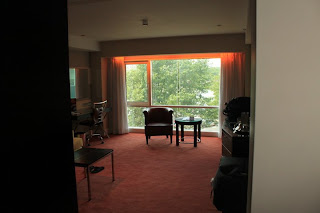 The living room of our suite, with the river view
The Holland v. Brazil match was scheduled to start soon, so we decided to get freshened up and change clothes, in hopes of finding a local pub.  I took out my international travel adapter that my sister-in-law gave me for my birthday, so I could use my hair straightener.  I plugged it in and.....POP!  Crap!  I unplugged it quickly and decided to abort that mission.  I guess that item was a little too strong for their outlet.  (Side note - I later found an American plug in another room in our suite, and tried to plug it in there.  It didn't work, so apparently my straightener is just busted now.  I fried it.)  Did I mention all the lights went out too?  Oops.  Apparently I tripped the breaker for power to the entire room.  We had to call the front desk.  :(

After that debacle, we headed out in search of a pub. We landed at The Steam Engine and cheered on Holland to a great come-from-behind victory.  I was proudly sporting my bright orange Holland shirt.  After the match, we walked around London and lots of fellow Dutch supporters gave me props.  Hup Holland! 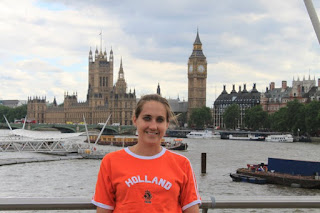 We did a bit of sightseeing since it was still light out.  We saw the London Eye, Big Ben, Parliament, County Hall, Jubilee Park, and the Thames River.  It was surreal being in the presence of such amazing history and architecture.  I loved every minute of it....well, except for the part where we tried to get hit by cars and motorcycles.  It's hard to remember to always look right before crossing!  Besides that, it was a fantastic first day.  We also loved hearing the British accent at every turn.  It's pretty comical actually, because they're speaking the same language, yet sometimes I have no clue what they're saying (cashier in the tube yelled at me because I asked "what" three times!) 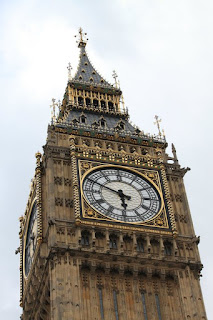 Big Ben - I had never seen it this close-up before, even in pictures 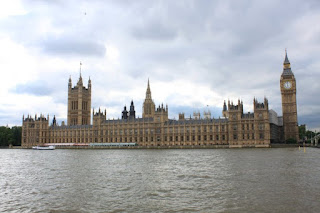 Parliament - a truly stunning sight to see
After we had exhausted ourselves from walking around so much, and the jetlag started to set in, we decided to grab dinner at Jamie's Italian (a Jamie Oliver restaurant).  Jer had flash steak and I had pasta bolognese.  Both dishes were delicious.  We also had our first order of "chips."  They were pretty typical french fries, but we just had to get some since they call them by a different name.  We headed back to our hotel afterwards and called it a night.  So that's Day One!  Up next....Wimbledon and Vertigo 42.

While I work on that post for another day, here are a few things I've learned/observed about London so far:
1) The fashion is atrocious (men and women)
2) Jorts are incredibly popular (refer to number one)
3) You'll hear sirens.  Alot.
4) Cranes are everywhere because everything is under construction. (They disrupted some of my pics!)
5) They know they're weird here, so they put "Look Right" on the ground at crosswalks to remind you.
6) It's hard not to mimic the British accent.
7) Demands seem to be made in a nicer tone, when you envision them being spoken in a British accent.  "Mind the Gap" as opposed to us saying "Watch your Step."
8) The lady's voice on the Tube sounds like the one in the Portal game.
9) Tap water at restaurants is more readily available than I expected it to be.
10) They don't have paper currency for anything less than 5 pounds.
11) There are so many variations of accents to be heard here, not just British.
12) Discretionary charges (mandatory tips) are added to some restaurant tabs.
Posted by vanweezy at 3:26 PM