After conquering our jet lag, Jer and I woke up extremely excited for Day 2 of our London stay.  That day was Wimbledon day!  I've been watching the Wimbledon tournament since I was a kid, and Jer has gotten more interested in it (because of me) over the past few years.  Even as we boarded the train to the grounds of Wimbledon with tickets in hand, I still couldn't believe we were going.  When we got there, I had to take it all in.  There were beautiful grass courts all around, tons of spectators on Henman Hill awaiting the ladies' final, and a buzz in the year because of the exciting day to come.  Since we got there early, we had a couple of hours to explore before the big match started.  We headed to the Wimbledon shop so I could buy way too many souvenirs!  This was a once in a lifetime experience, so I had to memorialize it!  After that we checked out the food offerings.  I went with a chicken caesar salad baguette and it was delicious.  Seriously delicious.  I'm a big fan of caesar salads, and then to put it in another one of my favorite things - bread - was perfect.  Bravo, English folks.  Jer opted for a "Dutchee," or a spicy British sausage in a crusty baguette. 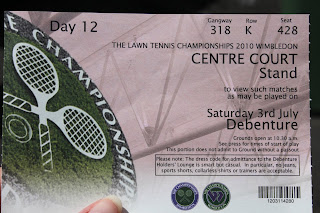 Our tickets entitled us to entry into the Debenture Holders Lounge.  This area was good for getting out of the heat, getting a full meal in a restaurant, or sitting out on a patio overlooking the practice courts.  It supposedly had a dress code, but apparently they made an exception for our shorts and flip flops!  (By the way, there were some extremely dressed up people at Wimbledon....high heels, dresses, suits.  No thanks!)  dWe went out on a balcony to see if anybody famous was warming up on Court 17.  Imagine our surprise when we saw Rafael Nadal!  We stood there in shock, watching him practice.  I snapped a bunch of shots and took some video.  It was so cool to see such a great champion on the court! 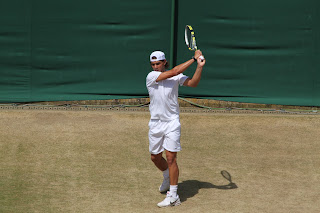 As it got nearer to match time, Jer and I decided to get the obligatory strawberries and cream and head to Center Court.  I made the mistake of not putting enough sugar on mine, but they were still good!  You can't go to Wimbledon and not get the strawberries and cream.  It's a tradition! 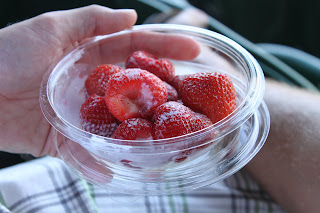 When I saw that our seats were on the 3rd level, I started to get a little disappointed.  I paid a lot of money for these tickets, and I wanted it to be worth our while.  As we sat down though, I soon realized that it would be hard to find a bad seat in that stadium.  Everything looks and feels close to the action.  And really, the number of rows in each level is limited, so level three there is a lot lower than level three in a basketball or football stadium.  Our seating area was inbetween the royal box and the players' coaches/family box.  The Queen wasn't there, and I don't know any other British royalty, so sitting near that box was lost on me.  I did, however, see Billie Jean King sitting over there, so that was neat.  We saw Serena's family (including Venus) over on the other side of us, so that was cool as well. 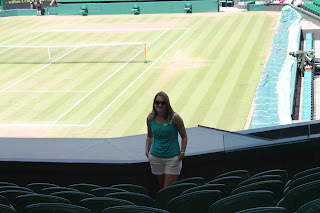 When the match started, it was surreal.  The crowd got so incredibly quiet during the points!  It was the weirdest silence.  You were scared to even whisper to your neighbor!  We were cheering for Zvonereva, in hopes of it being a more interesting match.  Serena was just too good for her that day.  Even though she was winning handily, there were still folks in the crowd who thought they needed to yell loudly for her during the "quiet" times.  Most notably, the girl seated directly next to me clung to the battle cry of "Come on Serena," with a British accent, extremely loudly, and often.  I didn't care, because I was excited to be there too, but you could tell some of the hoity toity elite sitting near us were not too keen!  I got to see Spot Shot in action, live, which was pretty funny.  The crowd really does clap rhythmically while it replays, and then gives a collective "ooooooh" whenever the result is shown.  We took some amazing photos during the match (and some video too, shhhhhh).  Serena came out on top and we happily watched her accept her first place trophy. 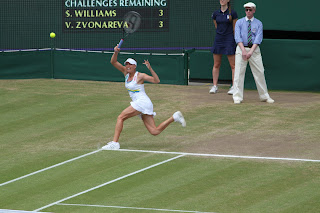 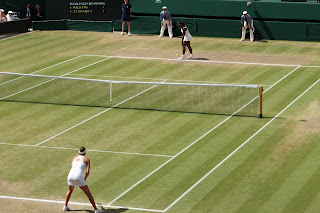 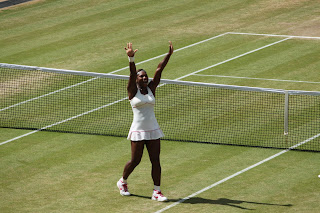 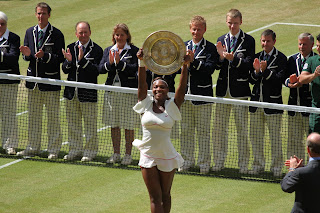 The match didn't last nearly as long as we had hoped it would!  We still had an amazing experience, though.  It certainly makes me want to buy tickets to other Grand Slam matches in the future.  We reluctantly left Center Court and decided to spend some more time wandering around the grounds.  We headed back to the Debenture Holders Lounge and spotted Todd Martin warming up on a court.  He was playing in an invitational match.  After that, Jer spotted Martina Navratilova eating lunch on the balcony of the All England Lawn and Tennis Club.  She was very gracious and interrupted her eating to say hello to all the fans below.   I couldn't believe we were in the presence of all these tennis greats! 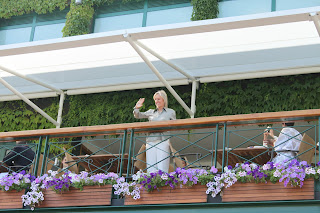 Alas, our Wimbledon experience had to come to an end.  We felt so lucky to add this day to our memory, and wouldn't have wanted to spend it any other way. 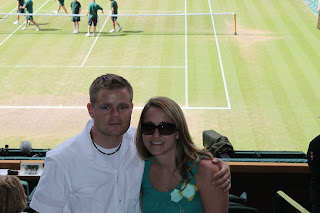 That night, Jer had set us up with a reservation at Vertigo 42.  It's a restaurant atop one of London's tallest buildings, Tower 42.  We got there around 8 so we could witness the city before and after sunset.  The views were incredible!  As we sipped our champagne and enjoyed the scenery, we overheard a couple next to us chatting.  They distinctly did NOT have a British accent, so we just had to interrupt them and ask if they were American.  Get this - not only were they American, but they were Texans!  So funny.  We spent the rest of the night talking with them and hearing their story about what brought them to London.  It's a small world!  Check out the pics from the top floor.  Breathtaking! 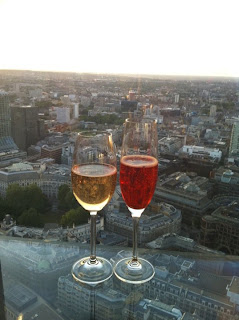 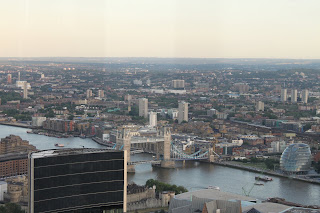 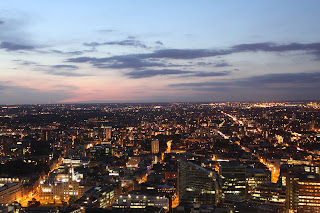