Before we get to our first day in Paris, let me finish off our last morning in Monte Carlo.  Since we had slept late the other days, we had never tried out the breakfast at the hotel.  We had to be up early for our trip to Paris, so we decided to give it a shot.  It was the best breakfast spread I've ever seen!  There were fruits, donuts, pancakes, eggs, bacon, sausage, cereals, yogurts, meats and cheeses, made to order omelets, and lots of different types of bread.  There were three different types of milk and six different types of juice.  It was overwhelming!  For some stupid reason we both thought the breakfast cost was included in our room rate.  Boy, were we wrong!  After we finished, a waiter walked over and handed us a bill for 52 euro.  That's about $65 in USD!  Holy crap.  No wonder the selection was so good.  When we went to check out, we discovered that they hadn't charged us for the mini-bar items we had consumed (a few sodas at 6 euro each), so that helped chip away at that breakfast cost.  Still, what a way to start a day!

When we got to the train station in Monte Carlo, we looked at the big board and found the platform where we needed to queue for the train to Nice at 10:38am.  A French man walked up and asked us for help.  I had no idea what in particular he was asking, but I did catch "Nice" somewhere in his question.  I thought he might be asking what time the train was leaving, so I pulled out my ticket and showed it to him.  That seemed to answer his question, so he sat near us in the waiting area.  As it got closer to departure time, a bunch of announcements came over the loud speaker that we were pretty sure referenced our train number.  Unfortunately they didn't repeat the announcements in English, so we were a little worried.  The guy we helped earlier got out of his seat, said something to us in French, and then walked away.  Ummmm....is there something we should know???  We looked at the screens on our platform and now it said the next train from there wouldn't leave until 12:38pm.  What?  No way!  We had a plane to catch!  We went over to the big board and still saw the original departure at 10:38 still up there, but now referencing a different platform number.  Our guess was that the 10:38 got canceled, and we could either take the 12:38 one from the original platform or move over to a different platform and get on that train, which also made a stop in Nice.  It was leaving at 10:45, so we opted for that route.  (This is all just our assumption, because we never got any confirmation on it!)  Luckily no one asked for our ticket on the new train, so mission accomplished! 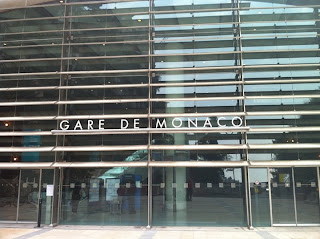 Monaco rail station
We made it on our flight just fine and arrived in Paris in the afternoon.  We took a cab to our hotel, Eiffel Seine.  It was pretty adorable!  It was just right around the corner from the Eiffel Tower.  I was wearing a Texas Rangers shirt, and when we walked in, a couple sitting at the bar said, "Go Rangers!"  That was awesome!  We talked with them for a second and found out they not only live in Texas, but in Richardson!  So funny.  I love stuff like that.  We checked in and found out we were staying on the fourth floor.  We opted to use the lift on account of our heavy bags.  When the door opened, we realized it wasn't big enough for two people and two big bags (not to mention 3 carry-ons).  I got in with all our bags and Jer trekked it up the stairs.  (Thanks babe!)  After settling in, we decided to walk over to the Champs-Elysees.  We passed by the Eiffel Tower first and had to take a ton of pictures.  It's definitely amazing and massive, but for some reason Jer and I just weren't that taken by it.  I apologize to all the Tower lovers out there, but I think the reputation of it has surpassed its utility for me.  Maybe the area around it detracts from it or something.  It's always packed with people, the queue to go up it is hundreds of people long, and street peddlers are everywhere!  I actually think admiring it from a distance was more appealing to us than being right there by it.  To each his own! 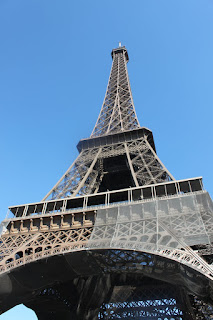 Eiffel Tower from below
The Champs-Elysees is a really neat street filled with shops and restaurants.  It ends at the Arc de Triomphe.  Now that's the kind of landmark I'm talking about!  This is, by far, my most favorite site to ever have visited.  Pictures of it can show some of its glory, but you just have to see it in person to get the full effect.  I could've stared at it for hours!  The structure is massive and the sculpting and design are just so awe-inspiring.  You can walk around it at street level for free, or pay to climb to its top.  We bought tickets and climbed the 300 stairs to the top!  Up there you'll get amazing views of the city and surrounding areas, and get to see every major landmark.  It's worth the money, if you've got the legpower! The Arc de Triomphe
By the time we finished that, we had already done a lot of walking and it was 10pm.  We headed back towards our hotel in search of dinner.  We found an outdoor Italian restaurant and stopped there.  Jer and I ordered a lemonade and a coke, and also tap water.  The waiter brought the sodas, but no water.  When he brought our bruschetta, we asked for the water again and he said, "No.  Bruschetta first."  We didn't know what to say!  Would the water be coming now, since we had the bread?  Or did we have to finish it first before he brought the water?  Either way, why??  Apparently you can't have any water before you get your bread! 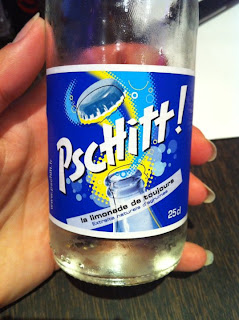 My lemonade
Posted by vanweezy at 10:42 AM