A Year in the Making

The hubby and I love tackling home improvement projects, but we'll never claim to be efficient in executing them.  Last summer, we decided that the muddy swampland adjacent to our existing 11' x 10' concrete slab patio was atrocious.  Water would pool there and the dogs would run through it often, which led to it being only useful for hosting mud wrestling events.  We had to remedy that.

We dug a 6' x 11' area, starting where the current patio ended.  That was no easy task in itself, since the depth had to be a few inches.  We were left with a lot of dirt/mud that we didn't have anywhere else to put.  We bought some 6x6 and 6x9 pavers from Lowe's and decided on a design.  Jer and I also purchased some large 12" stones to section off a fire pit.

We put down a layer of paver sand and got the area leveled.  I started laying down the stones, and even got my mom to help out on a couple of different occasions.  The most tedious part was cutting the pavers to fit around the fire pit and around the border.  We made a lot of progress, but then we started hosting a foreign exchange student, and the weather got colder, and that project fell by the wayside.

During that break from progress, we noticed that the water was still pooling on the new patio.  Jer decided it was time to bite the bullet and install a french drain.  I've never seen him work so hard on something in his life!  He spent HOURS out there, completely covered in mud, until he had dug a deep trench from underneath the gutter downspout, to the alley.  His tremendous effort immediately paid off, because we could tell the water was funneling out and no longer just sitting on the patio.  I was so thankful for that!  Unfortunately, though, the installation of the drain necessitated the removal of some of the stones I had already laid.  So we had made progress in one area, and went backwards in another!

This past weekend, we finally decided to take this project to completion.  We laid out the remainder of the stones, cut the final border pieces, and poured the finishing sand to fill in the spaces.  It looks awesome!!  I'm so glad we did it.  Here's the final product: 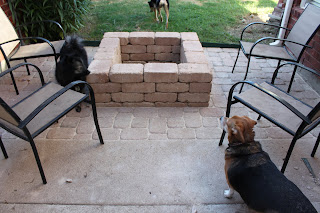 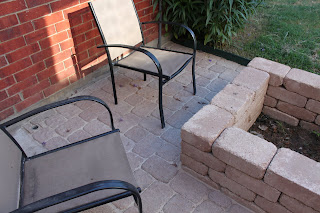 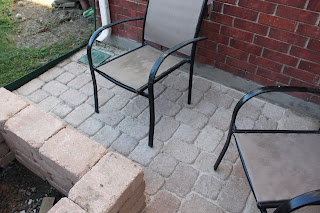