The theme of our latest Supper Club was Brinner, breakfast for dinner.  Like all our previous gatherings, the food was amazing.  We had breakfast enchiladas, breakfast pizza, homemade cinnamon bread, waffles, fresh fruit, and Bloody Mary and Screwdrivers for the drinks.  Jer and I were only responsible for bringing the vodka, OJ, and fresh salsa to top the enchiladas and pizza, so we decided to try something a little crazy and bring it as a surprise.  Not sure what gave Jer the idea, but he wanted to attempt "Breakfast Sushi."  Of course we wouldn't actually be using any ingredients normally associated with sushi, just the idea of rolling up a bunch of items and eating them LIKE sushi.  We tried out two different small rolls, and then made a big biscuit "loaf." 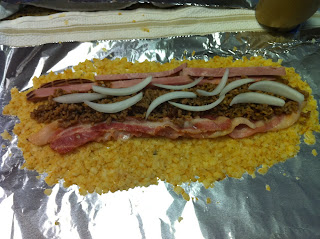 Above is a before picture of the loaf.  It had hash browns, bacon, sausage, ham, onions, and cheese.  We wrapped all of that with a massive biscuit and baked it in the oven.  Here's the after picture, along with the two small rolls. 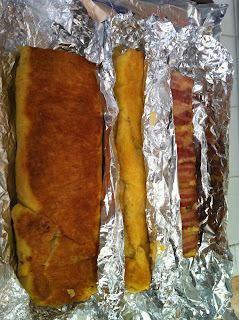 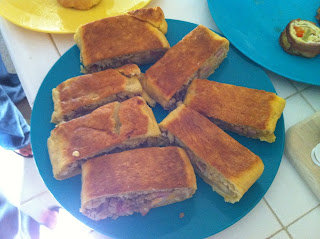 We put some of Jer's fresh salsa on it, and it was delicious!!  One of the small rolls that we actually sliced up like sushi had ham, bacon, onion, bell peppers, and cheese, surrounded by a biscuit.  See picture below.  It was also delicious topped with salsa. 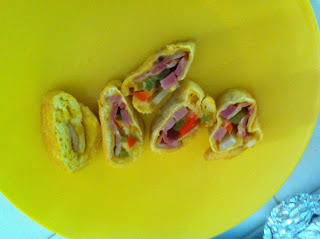 The other roll, which came out the best appearance-wise, is below.  It included onions, bell peppers, and jalapenos wrapped in an egg omelet, which was then wrapped in bacon.  Based on the look and the taste, I'd say Breakfast Sushi was a success!! 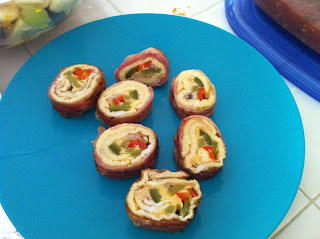 This meeting of Supper Club was the first we'd had since two of our members, Pappy and Shawn, had their home burglarized.  The rest of the group wanted to help in whatever way we could, like we did when my sister's house underwent the same fate.  P & S had already replaced their electronics, so we couldn't go that route.  We debated on giving a gift card, but all decided that cash would just be the best bet so they could spend it on whatever they needed!  Handing them an envelope full of cash is just not this group's style though.  We all agreed that "making it rain" on them was more apropos.  And of course we needed dollar bills for that.  Each couple decided on how much they wanted to contribute, and then went to the bank to get one dollar bills for that amount.  The result was quite impressive! 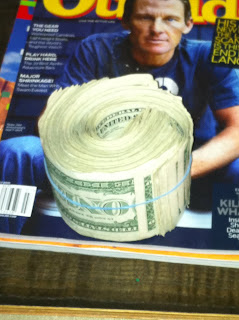 (Don't get crazy - they're just ones)
We designated Rebecca to be our "Make it Rain" girl, so she did the honors for the rest of us while we cheered and laughed: 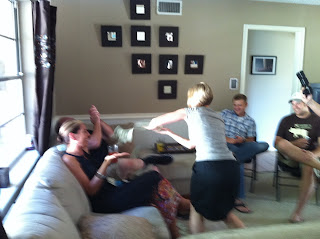 It was greatness.  Pappy and Shawn were shocked and grateful, and not to mention very pleasantly surprised at being able to partake in this ritual usually only reserved for rap stars.  :p 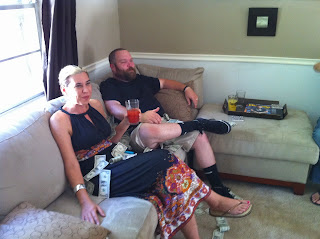 They let the bills marinate for a while, so they could really soak up the experience!  We love you guys, and we can't wait to hear about the look on the bank teller's face when you bring in that fat roll of ones!  (Please tell me Shawn will be the one doing it).
Posted by vanweezy at 11:57 AM