This past weekend I fulfilled my responsibilities as an Aunt by going on a date with my niece, Olivia, on Friday, and then babysitting my friend's son, Ryan, on Saturday.  It was a wonderful weekend!  I picked up Livi from daycare around 2pm, right when she was getting up from her naptime.  She was groggy, but immediately reached for me when she noticed me standing in the doorway.  Not gonna lie - I love that feeling!  I took her over to the Galleria so she could play in the kids area for a while.  She was a little hesitant to just jump in and join the other kids, who looked to be a couple years older.  She decided to sit in my lap for most of the time and give me the play by play of what everyone else was doing!  "She's jumping."  "He is running." "That's a girl."  (There's a reason my sister calls her Captain Obvious, LOL).  I did finally convince her to check out the little puzzles in the play area.  She had a good time with those. 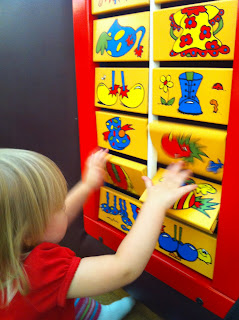 Future puzzle nerd, like her Aunt
After we left the play area, we headed over to the Toys 'R Us store.  I honestly can't remember the last time I heard Livi exclaim something so loudly...."THERE'S DORA!"  "AND TINKERBELL!"  It was adorable.  She was so genuinely excited.  I bought her a little baby doll (which she named Purple Baby) and a bag full of play stuff to go with it.  She wanted to check it all out immediately, so we went home to play. 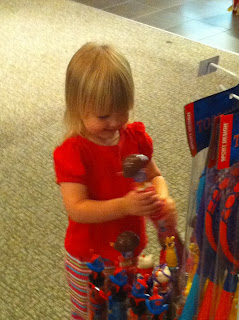 DORA!!
I think it's pretty cute how kids, at such a young age, can grasp the concept of pretending.  She pretends the bottle has milk in it and gives it to the baby doll.  She pretends the jar has baby food in it, and proceeds to "feed" the baby.  It's like, how do you explain a concept like that to a 2-year old?  You don't really have to; they just get it.  My favorite, though, is that the bag of baby stuff came with a mini potty.  She set the baby doll on it for a minute, and then brought it all the way to the bathroom to dump the imaginary pee into the toilet.  Talk about being dedicated to the make-believe scenario! 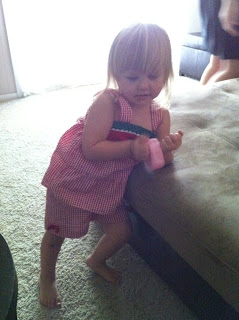 My little precious girl
On Saturday, I went over to my friend Sarah's house to babysit her son so she could attend a baby shower.  Her little 18-month old is the easiest kid to babysit because he's so darn happy all the time!  He's also great because he's not shy around me at all, and quickly adopted me as an honorary family member.  We played with his toys for about an hour, and then he kinda made a sad face and let out one of those sounds like he wanted something.  He reached his arms out, so I said, "Okay, you want me to pick you up?"  I figured we'd next go through the routine of figuring out if he was hungry or needed to be changed, etc.  Instead, he put his arms around my neck, laid his head on my shoulder and proceeded to fall asleep.  Cutest. Thing. Ever.  Apparently he just wanted me to hold him while he took his nap.  After he was out soundly, I could've moved him to his crib, but I decided to just enjoy the awesome feeling of having a baby sleeping on you.   I'm in no rush to have a baby of my own, but when the time comes, I'll be happy.  :) 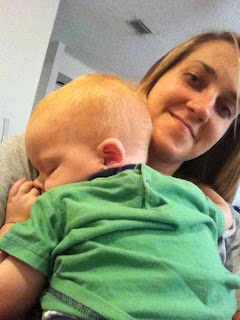 So cute! Mama Janet, you are getting good training for whenever that day comes.