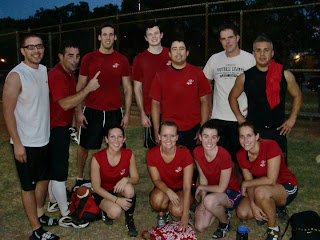 A couple months ago my friend, Todd, asked me to sub on his coed flag football team.  I jumped at the opportunity because I loved playing on intramural teams in college and could use the extra exercise now.  That quickly turned into subbing on an additional flag football team, part of the same "franchise" as the first, but played on a different night with a few of the same players.  I was flattered that I kept being asked back, and enjoyed playing on teams with really talented athletes (especially the girls - damn, it's refreshing to see girls that can hold their own on the football field).  Both teams were very successful, and last night was the last round of playoffs for the Thursday night team.  (We won the first playoff game 27-0 last week).  We dominated in the second round game, winning 20-0, which brought us to the championship game.  It was a really great battle back and forth, full of great defense.  We ended up victorious, 13-6.  It was a pretty exciting win, especially for it being my first season with the team, and I look forward to playing on these teams again next season! 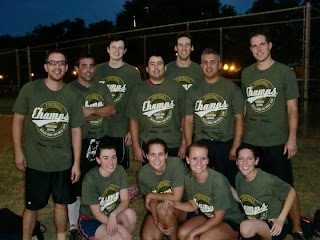 Champs!
Posted by vanweezy at 2:40 PM