Okay, so it was a lucky goal, thanks to the English goalie making a terrible mistake.  But, hey, it still counted!  Even though the American team didn't end up winning the game, I think they can probably be happy with the tie.  The German team won convincingly on Sunday (I have to root for them now b/c of all my German friends!), and I'm hoping for a Dutch win on Monday morning.  Since individual teams don't play very often this early in the World Cup, it's nice to have multiple teams to root for, so that I stay interested!  Hup Holland!

On Saturday morning, I participated in the Plano Komen Race for the Cure.  It was awesome because there were so many of us!  My mom and dad were there, along with my sister Jill and 3 of her children, my sister Jo and her family, our friends Sarah, Rachel, and Rebecca and their families, and Jo's friend Emily and her family.  We were all sporting our black Team Komen shirts.  I decided to try and run the 5K even though I haven't been training at all lately.  I ran the first two miles straight through, then walked for about a minute.  Then I ran the last mile.  I was hoping to run the entire thing, but the ridiculous muggy weather and lack of preparation held me back a little bit.  At least it was only for a minute though!  After I finished, I walked back from the finish line until I found my friends and family.  I crossed the finish line again with them, and then we checked out all the great booths and hung out for a while.  It was a wonderful way to spend my morning. 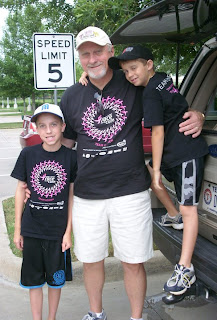 Opa, with his grandsons 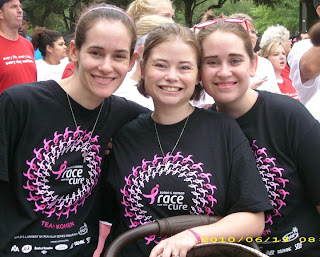 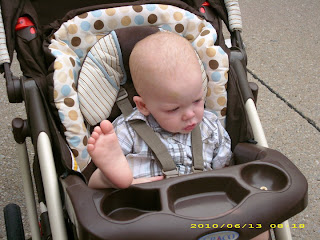 Jo and Livy (who is becoming a Komen veteran already!) 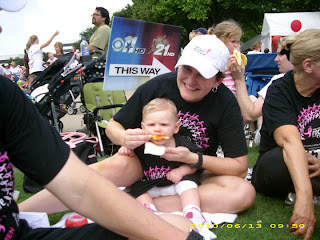 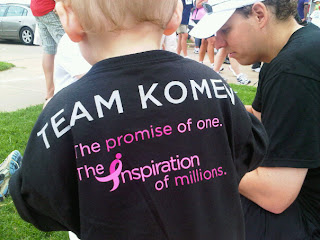 Team Komen!
We spent Sunday relaxing in the pool at Jo's house before enjoying Supper Club - southern style!  I've learned to eat as little as possible for breakfast and lunch on Supper Club days.  The food is guaranteed to be delicious and plentiful, and this was no exception.  We had some yummy ribs, pork, fried chicken, mashed potatoes, fried okra, cornbread, and bean salad.  Dessert was peach cobbler with homemade ice cream.  Damn, that food was good!  I look forward to the next one.  Have a great week, everybody.
Posted by vanweezy at 11:35 PM