Are You Ready For Some Football? (The Other Kind...)

Last weekend, Meezy and I were invited to watch a soccer game at Cowboys stadium with our friends, Jonathan and Rose.  I was a little hesitant at first, just because going to Cowboys stadium can be a beating, and I'm not really a superfan of soccer, especially if the teams playing aren't the US or the Netherlands.  But, this match was between Brazil and Mexico, and Jonathan's family is from Brazil, and Rose's family is from Mexico.  So, that made it more interesting!  It's fairly ridiculous how much it costs to park around that stadium, but whatevs.  The process to get in was also kind of annoying.  They patted down every single person, which meant long lines in the hot sun.  Once we finally got into the stadium, though, we were very pleasantly surprised to find out where our seats were.  Just five rows up from the field!  It was by one of the corners, so we also got to see the players entering and exiting the field.  Not too shabby: 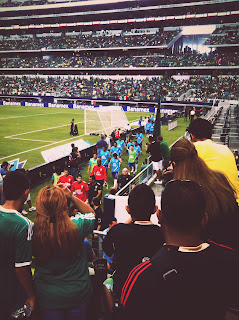 Brazil's team heading to the tunnel 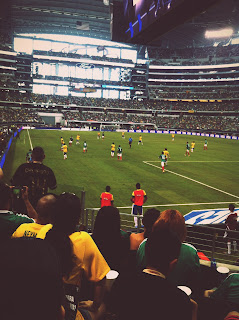 The game was a lot more exciting than I expected it to be.  The fans are so enthusiastic, so you couldn't help but catch the fever.  Mexico's first goal was pretty damn impressive, and it was neat to see it up-close!  Going to this game definitely made me more interested in seeing another game in person in the future.  It's not the same to watch it on TV, but you can bet I'll be tuning in to cheer for Oranje in the upcoming European Championships.  Hup Holland!
Posted by vanweezy at 9:38 PM