Everyone tells us that Dutch looks exactly like Meezy.  It's pretty accurate, except for the widow's peak.  Meezy doesn't really have one, but his brother does, so it's definitely a Meezy family gene.  Last time we were in Amarillo, I asked Meezy's grandmother for some of his baby pictures, so we could compare them to Dutch.  The resemblance is quite uncanny!  They aren't exactly the same age in these photos, but you can tell they're father and son: 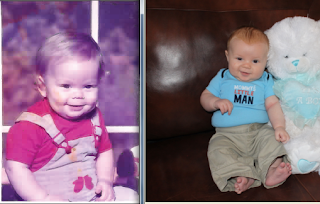 I was looking through photos I had taken a couple years ago of Dutch's cousin, KC, and I realized that I had some from when he's wearing the same shirt that Dutch was wearing in his 2-month pictures.  (KC's mom gave us a bunch of his old clothes since her second child was a girl).  I grabbed one of those and compared it to a similarly-posed photo of Dutch.  See below:

Isn't that funny?  There's quite a resemblance there too, but my guy is definitely chunkier!  Lol.  Here are some other random pics from the last couple of weeks: 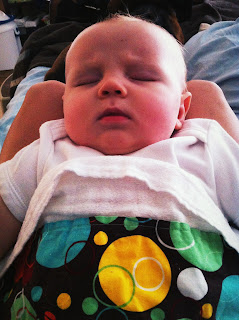 He wasn't feeling good one day, so when I put him on my knees so I could blow dry my hair, he fell asleep immediately. 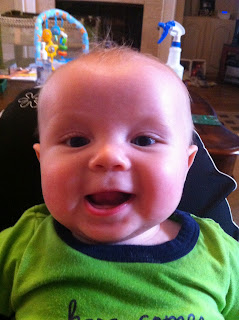 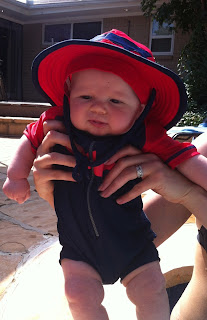 We took him swimming for the first time.  You're not supposed to put sunscreen on babies under 6 months, so we covered as much skin as we could with a wetsuit and hat! 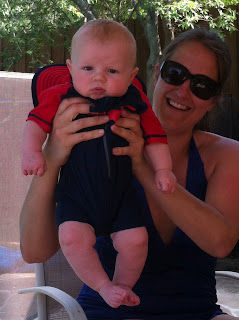 By this point, he was clearly over it.  Haha.  His Aunt Jo got a kick out of his attire though!