Auf wiedersehen, goodbye!  I'm saying adieu to my car payment.  I wrote a check for the balance of my loan, and it feels fantastic!  Exactly 3 years ago today I purchased my Audi A4, and I've loved it ever since.  Jer calls it a girly car since it's red and sporty, but I prefer to think of it as a classy car.  While it wasn't the first car I ever purchased, it is the first car that I'll have ever paid off!  Three years is a record for me owning the same car.  LOL.  Let's see....I've been through a Mazda 929, an Oldsmobile Cutlass Ciera, a Ford Mustang, a Ford Escape, and now the Audi.  That's quite a few cars, considering I've only been driving for 10 years.  My previous personal time of ownership record was 2 years, so you can see why I never was able to pay anything off!  It's going to be pretty weird to not have a car payment for a few months, but I'm sure I can handle it.  :)


Our plan is to take the money we'd normally spend on my car payment and put it towards Jer's car.  That way, when we buy a new car in December, Jer's will be almost paid off and before long we'll be back down to just one car payment.  It'll also be sweet to trade in my car and actually get the full value of it as a down payment on the new one.  Not saying this happened to me or anything, but I heard about a girl who had to PAY to make up the difference between what she owed on her Escape and what it was worth at trade-in, upon purchasing an Audi.  Nothing like dropping $4K at closing, and having none of it go towards reducing the principal on the new loan.  That situation will never happen again (to that hypothetical girl....)

So, to my Audi A4, thanks for the last three years.  It's nice to finally own you outright.  I can boss you around all I want, and you're not allowed to back talk.  Hopefully you'll be good to me these last few months we share together. 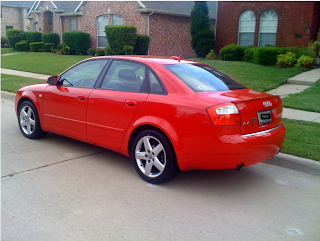