Jer and I had to drive to Amarillo on Saturday to return his mom's truck that we borrowed a couple weeks ago for the Jeep journey.  A few days before that we had decided we'd just drive together in the truck there, and fly back on Sunday morning.  That sounded way better than driving an extra car down there separately on Saturday, just to have to make another 5.5 hour drive the next day.  So we're en route to Amarillo on Saturday afternoon when it dawns on me that we have no transportation arranged for Sunday.  We're flying into Love Field, and we didn't think to drop a car off there before we left, or ask anyone to pick us up.  Oops.  Sometimes things just slip your mind, ya know?  I got on the phone and asked my sister Jo if she could help.  She came through, like she always does, even at such short notice.  And did I mention the flight would arrive at 9:15am on a Sunday morning?  She's a trooper.

The Amarillo fam was nice enough to wait until 8pm to eat dinner with us on Saturday night.  We tried out Goody's and it lived up to the name.  Afterward, we headed over to Michal-ann and Cary's house to hang out for a while.  Jer and I thought this was the perfect opportunity to introduce them to Four LOKO, or just LOKO for short.  Haha.  This drink has become a bit of a cult classic among my circle of friends back in Dallas.  It's like an alcoholic energy drink that comes in fruity flavors.  It's 12% alc/vol, so it doesn't take much before you start feeling it.  They are sold in 24oz. cans.  (We even got my mother-in-law to try it!)  Felicia and Cary weren't too impressed with it, but my brother-in-law Seth ended up taking it for the team and finishing it off.  Maybe we have a new member in our LOKO cult???  Haha. 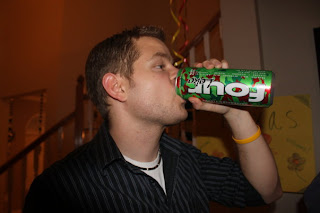 We ended up staying up kinda late, or maybe it just felt late since our flight was at 8am the next morning!  Either way, it was great hanging out with the Amarillo crew, like old times.  My mother-in-law gets major props for getting us to the airport by 7:30am.  I don't know about some of you guys, but I've got it lucky because my MIL is the BEST!

So now for the serious stuff.  We landed on Sunday morning and immediately got a call that my Oma had fallen in her apartment.  She couldn't get to a phone, but luckily was wearing her life alert bracelet.  They responded and called paramedics, and my dad, who lives nearby.  Since she couldn't get up, the EMTs had to break down her door to get to her.  There was quite a bit of blood on the floor, so they were worried about the extent of her injuries.  They took her to a hospital, where it was discovered that she broke her nose, had other facial fractures, and had a small bleed in her brain.  At this point they thought she would probably need plastic surgery and possibly other surgery if the bleeding around her brain didn't stop.  She had to spend Sunday night in the hospital, and wait for the plastic surgeon and neurosurgeon to see her on Monday.  Since my boss is amazing, he completely understood that I wanted to be with her on Monday if these procedures were going to take place.  Not exactly the Monday I was expecting to have, but life happens.

She had a variety of tests run on Monday morning, and they determined that the bleed wasn't serious and her facial fractures could heal on their own.  This was great news because surgery can be very hard on anyone, let alone a 91 year old.  If you've ever spent time in a hospital, you know that it's scary to be there alone.  I decided to head up to the hospital even though she wasn't having surgery, just to be there with her until she was discharged.  When I got to her room, I could barely recognize her.  Her nose was swollen, along with the whole right side of her face.  It's extremely bruised all over.  I have no idea how she wasn't in excruciating pain, but she said she wasn't.  The neurosurgeon came by and cleared her, but we needed clearance from physical therapy before she could leave the hospital.  That consult didn't go as planned.  Oma had a hard time getting out of the bed, walking around the hospital wing, and sitting and standing.  The therapy nurse basically told me that she wasn't approving Oma's discharge yet, and when she did, she wouldn't approve her going back to her apartment.  She didn't feel it was safe for Oma to be alone.  Try telling that to a stubborn 91 year old Dutch woman who hates the idea of nursing homes or assisted living.  I thought I was just going up to the hospital for a couple hours while the discharge papers were prepared, but it turned into a really harrowing 6 hour experience.

At first, Oma was very lucid and coherent and we talked about her fall and what had happened since then.  As the hours passed though, the situation changed drastically.  I had to constantly remind her that we were in a hospital.  I had to plead with her to not try to get up out of bed because she kept forgetting that she wasn't able.  I had to yell at her to stop when she accidentally started pulling her IV completely out of her arm.  I had to remind her that she was speaking to me in Dutch sometimes and I didn't understand her.  I had to explain to her that the imaginary food she was seeing on her tray wasn't really there and it was just an empty tray.  I had to listen to her tell me that a piece of cake was really an apple.  I had to listen to her tell me that the clock on the wall couldn't be trusted because sometimes it would move forward and then suddenly start going backwards.  When she was amazed that the door was already fixed, I had to remind her that we weren't at her apartment and she was looking at the hospital door, not her own.  She asked me whose TV was in the room, and I had to tell her it was the hospital's.  She asked me if I had any coffee and then said, "Oh, wait!  This isn't your apartment."  She asked the nurses that came in where they lived in her apartment complex.  When I would speak to the nurses about Oma's care, she would ask me where I knew them from.  After being told numerous times that she wouldn't be checking out today and would be going to a rehab place tomorrow, she kept asking when we'd be leaving that day and if she needed to change.  I can't tell you how many times my eyes started welling up with tears.  This isn't my Oma.  I hope, hope, hope that it's a combination of the medicine she's taking and the lack of sleep that's causing her delusions and memory loss.  I don't know, though.  She's 91 years old.  How long can we reasonably expect her to be cognizant and lucid?

I hadn't eaten all day, so Jer and my Dad met me up there to get some food together.  We also stopped by her apartment to grab her a change of clothes for her transport to the rehab place tomorrow.  When we got back to the hospital, my Dad relieved me and sent me home.  After spending that time with her, it made me terrified for her to ever be alone.  I just can't trust that she won't do something further to injure herself.  It's a stressful situation, and I know my entire family is feeling it.  We took turns looking after her on Sunday and Monday, and hopefully the rehab place will help my Mom and Dad and Jill get a break.  They live the closest to her, so they've been carrying the weight of her care on their shoulders.  I don't know what the future holds for her after her 21 allowed days (per the insurance rules) at the rehab place.  I know she'll want to go back to living on her own, but she's had at least 3 falls in the past year.  I imagine there will be a fight or some sort of intervention in 21 days. 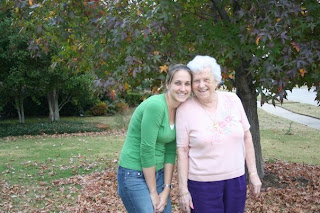 Me and Oma (with a black eye from a previous fall!)
Posted by vanweezy at 10:12 PM

I'm so sorry!! That's so hard. We went through that with my Mur in '04 and it was so hard. Y'all are in our thoughts.