Meezy and I spent the last day in NYC on our own because the rest of our group had already departed. We signed up for a guided tour that began at St. Paul's Chapel. The guide had owned an office down the street from the WTC plaza and gave us his first-hand account of what it was like in the city on September 11th. We learned about the roles that area buildings played during the aftermath, serving as staging grounds or command posts or sleeping quarters. We stopped by St. Peter's Church before making our way to the World Trade Center plaza. Inside the footprint of where WTC1 and WTC2 used to be now stands two memorial pools. They are breathtaking. Pictures have a hard time capturing the magnitude of their size or their meaning. 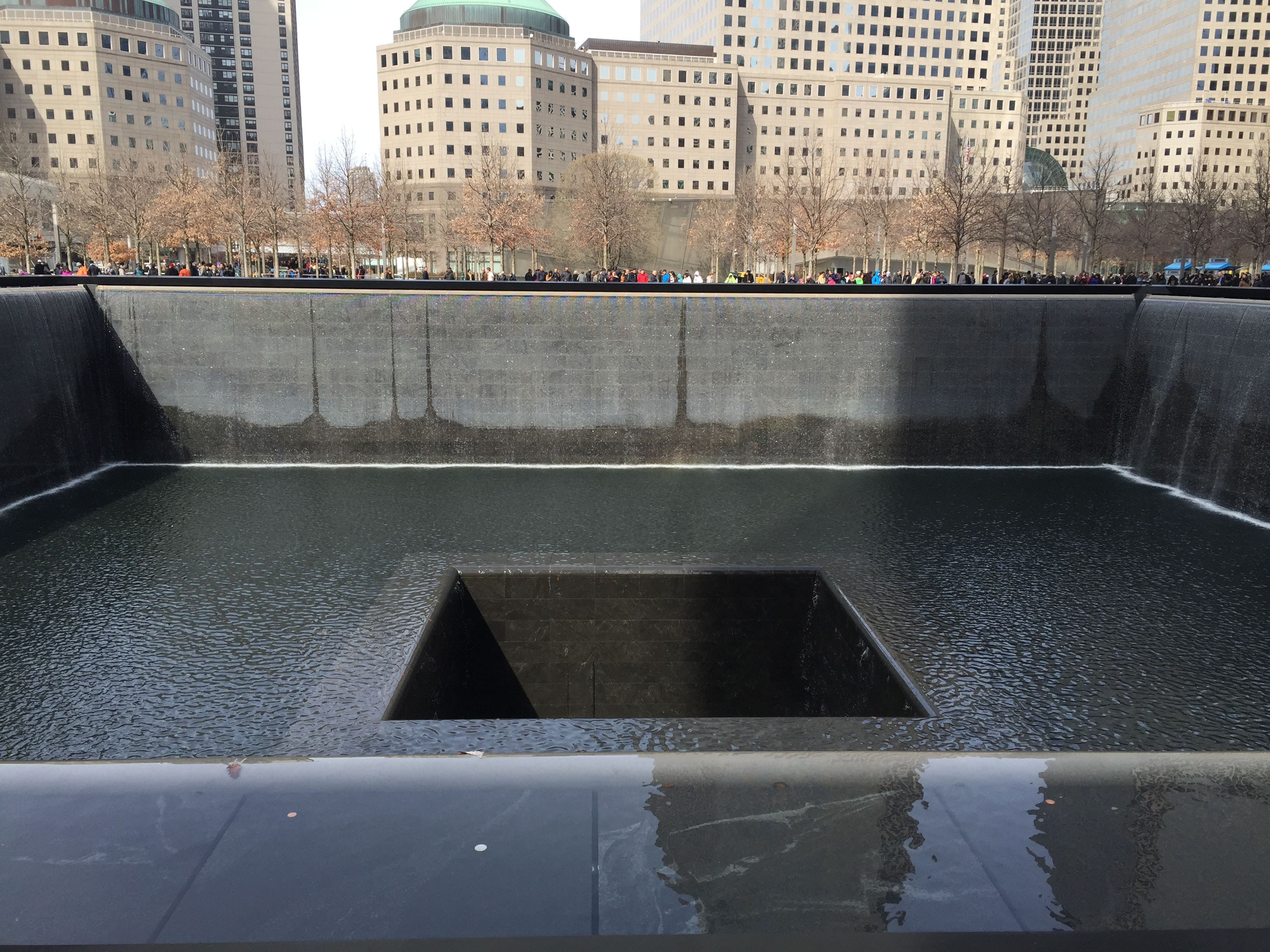 At ground level, there are cascading waterfalls around the entire square structure. The water makes a second drop even further below ground level and then recirculates back around for another trip down the waterfall. The panels around the entire perimeter of both pools include the names of the victims from the 1993 WTC bombing and the September 11th attacks. I only took one picture inside the 9/11 Memorial Museum because the experience was so solemn and I just wanted to show due reverence. I remember vividly what I was doing and what thoughts I had when I started watching the news coverage on that fateful day. I've heard the details over and over again and certainly seen my fair share of documentaries and news stories about it, but being in the museum made me really see everything, for what felt like the first time. I was an 18-year old college student when 9/11 happened and my worldview was different from what it is today. Now, as a wife and mother of 2, the hurt stings in different ways. I don't really want to explain what all the exhibits were like or all the feelings I had as I walked through them. I think you just need to see it for yourself. Please, make the trip. The observatory at the top of WTC1 has amazing views of the city, so Meezy and I headed up there to grab lunch and take it all in. On our way back to the hotel, we stopped by a Century 21 department store. I read they had good deals and a huge selection, so I figured it was worth a shot. Oh my gosh, the place was packed! Granted, it was a Saturday, but I still felt overwhelmed. We had a little bit of time before our dinner reservations, so we relaxed back at our hotel. We relied on cabs more this day than we had the previous two days, but that's because the weather was colder and our bodies were tired! For dinner, we ate at Lincoln Square Steak. It had good reviews online, so we figured it was worth a shot. As part of your meal, they provide a small complimentary appetizer and dessert, so that was nice. Our main courses were fine, but I think if we had had a better waiter, we would have left with a better impression of the place. He couldn't give any details to Meezy on what the special was and never asked him if he wanted a second beer. It also took forever for him to bring us our check. With as many restaurants as there are in NYC, I think it's safe to say we would try someplace else the next time we visit.

The grand total for Saturday, according to my Apple watch, was 11,602 steps covering 5.25 miles. Not bad! That concluded our NYC vacation. We caught an early flight the next morning and came back home to hug our sweet boys. I'm very lucky that my mom is able to babysit for us so we can take such meaningful, memorable trips.
Posted by vanweezy at 3:14 PM