Meezy and I were lucky enough to be able to take a trip to NYC recently while my mom took care of our kiddos. The main purpose of the trip was to see Aladdin on Broadway, and we tried to make it a trip where all of his siblings and their spouses could come. Unfortunately, Meezy's oldest sister wasn't able to join us. There were three couples total, and we staggered our arrivals to and exits from NYC based on our individual availability. We made sure to all be there on the night of the Aladdin show, though.

Meezy and I arrived on Thursday afternoon and checked into the City Club Hotel near Times Square. The location was very convenient for a lot of the activities we had planned. Because this was a nice kids-free getaway for us, we opted for an upgraded room. That was definitely a good decision, as the room was awesome! When you walked in on the main floor, there was a living room, a half bathroom, an additional seating area near the windows and then a walk-out balcony. A spiral staircase led you up to the bedroom and huge full bathroom. 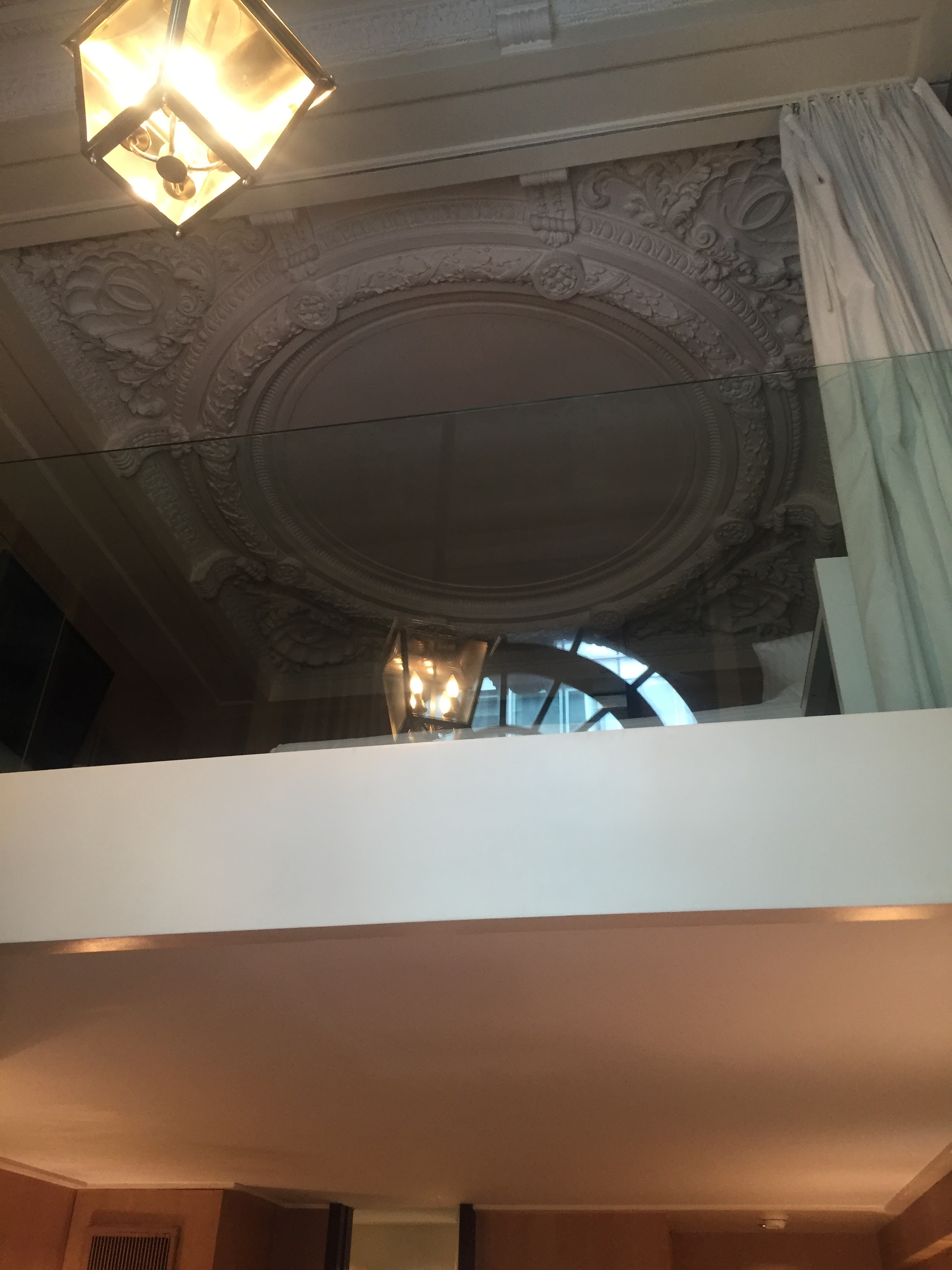 View from downstairs toward upstairs and the gorgeous ceiling Huge flag hanging near our balcony 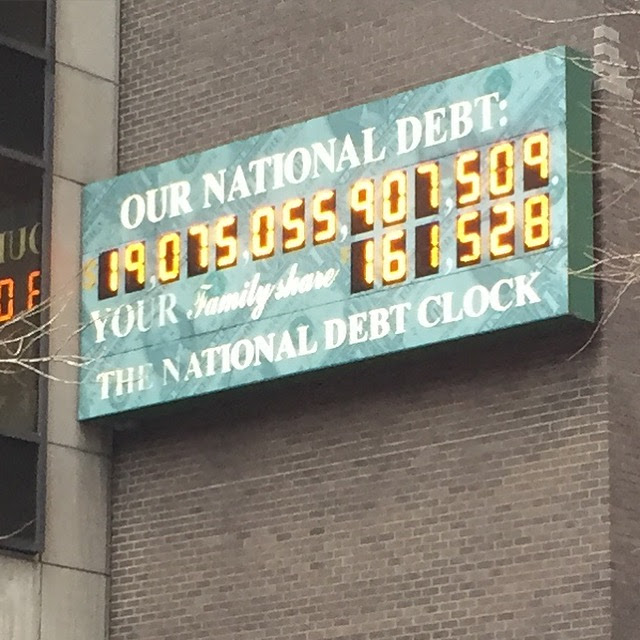 The unfortunate reminder we got every time we walked onto our balcony!

We decided to eat dinner before our show and selected Glass House Tavern. It was conveniently located nearby and had space to accommodate us. Meezy's dad covered our dinner, which was a wonderful treat! 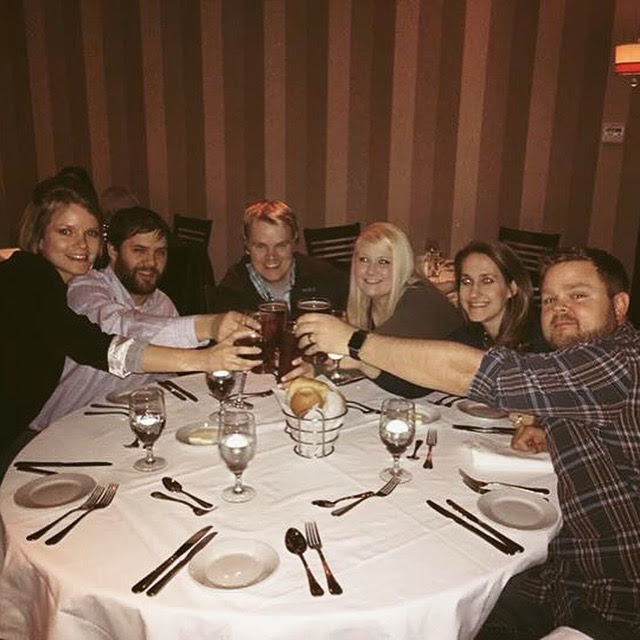 After our meal, we were all pretty excited about heading to the show. I honestly didn't expect to like Aladdin as much as I did. I've certainly seen the movie numerous times and figured the Broadway production would be a little cheesy. Much to my surprise, it was quite entertaining. The costumes were fantastic, the visual effects were done well, and I laughed fairly often. I wish we were allowed to take pictures during the show because there were so many amazing things to look at. I had to settle for sneaking a picture of the curtain before the show started. After the show was over, they made an announcement about their partnership with the charitable organization Broadway Cares. They were asking for donations and would give memorabilia in exchange for them, like aprons, cups, posters, etc. I thought, sure, I can spare some money to do some good and get the added benefit of going home with a tangible memory of the show. The last item they offered in exchange for a donation was the opportunity to take a backstage tour and meet the actor who played the Genie. Whhhhaaaaattt? Of course I wanted to do that! Seriously, how often would you get an opportunity like that? I signed up our group immediately and we waited around while the theater cleared. There were about 10 other guests who jumped at the chance too, so we were all treated to a guided, behind-the-scenes tour of what backstage is like at a Broadway musical. We learned some intriguing information, but of course the coolest part was seeing all the props they use in the show. The backstage area is so small that they really have to utilize every single inch of space they have available. That means lots of things have to be hoisted up and stored above your head. 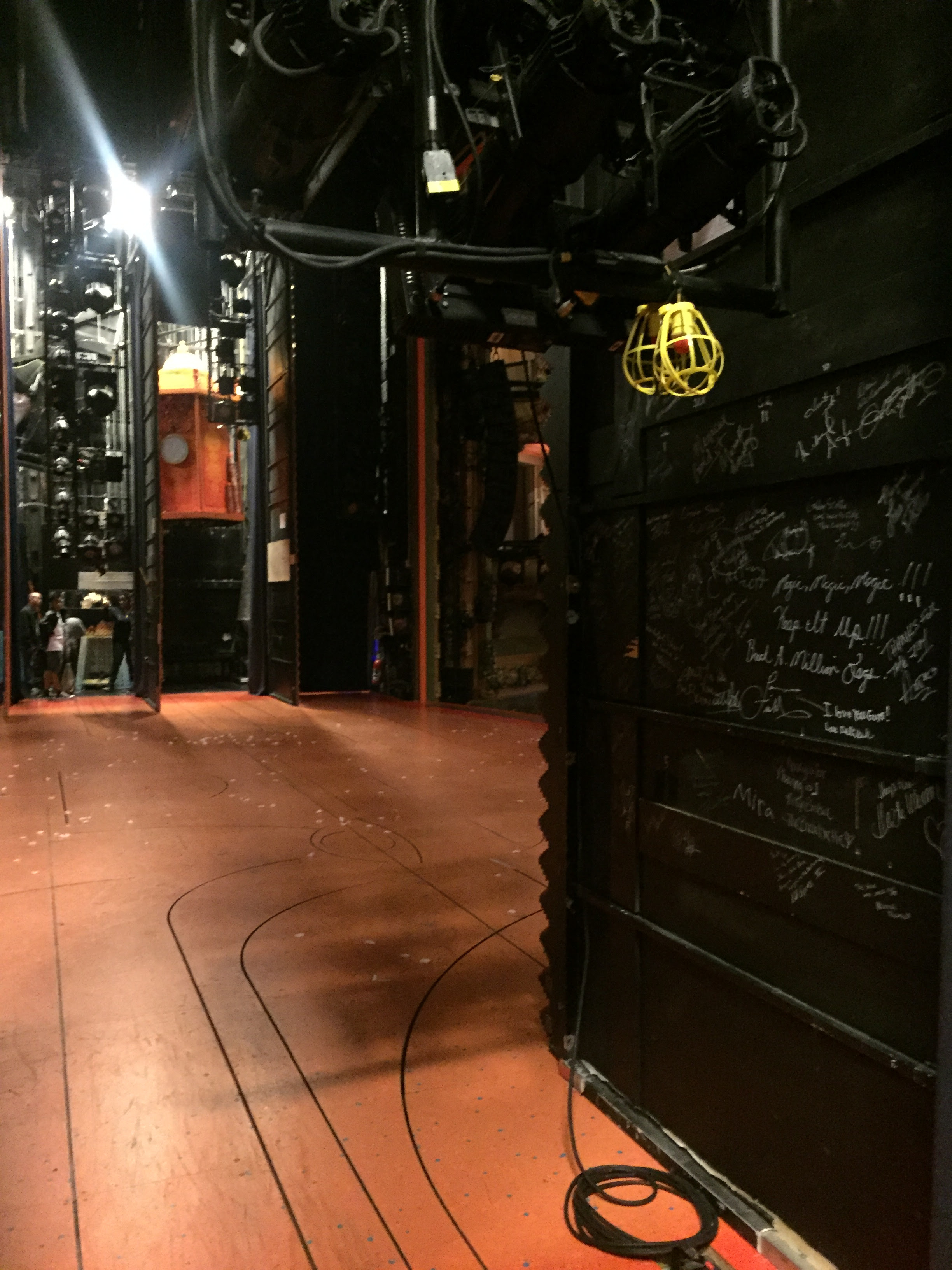 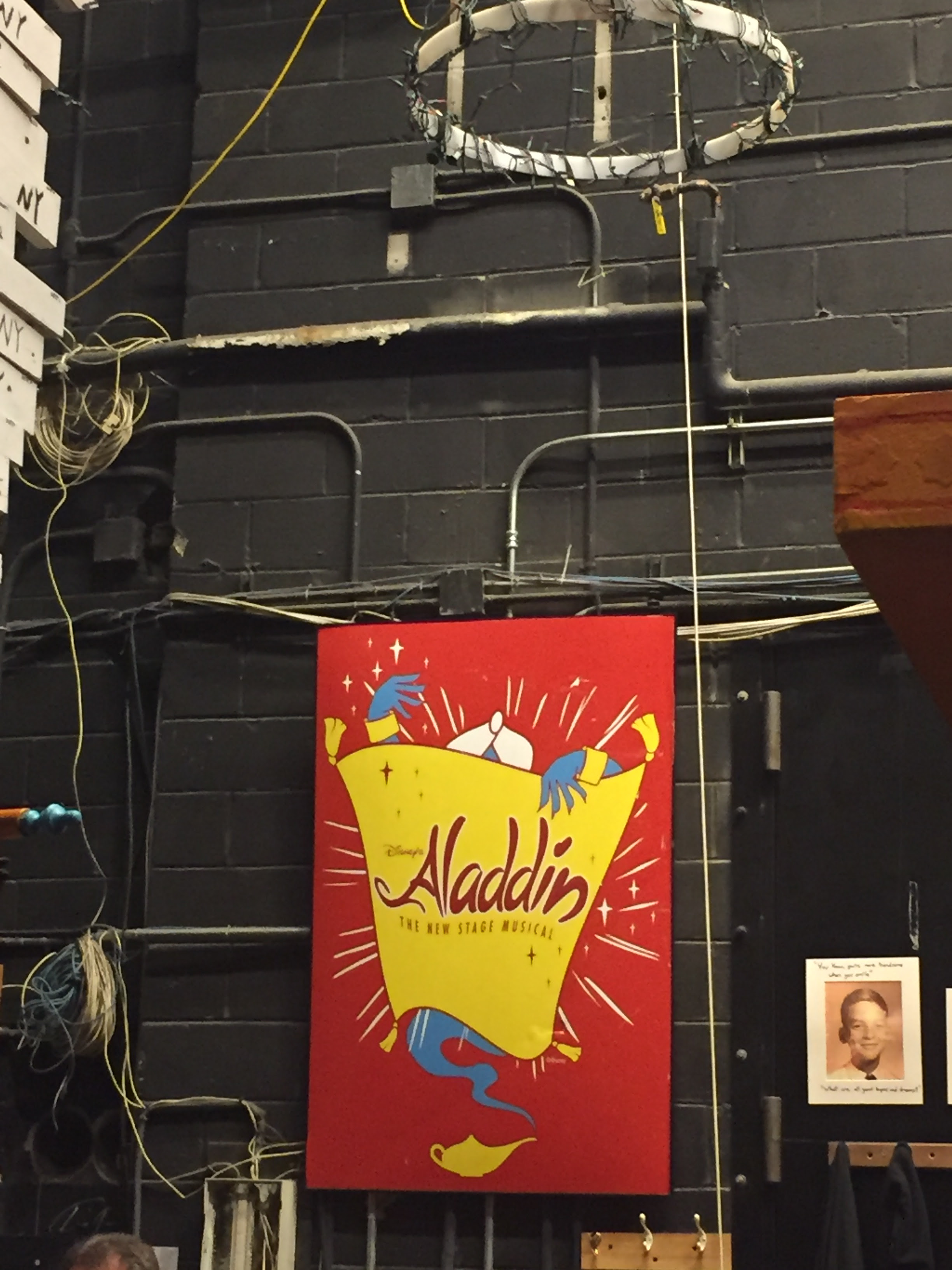 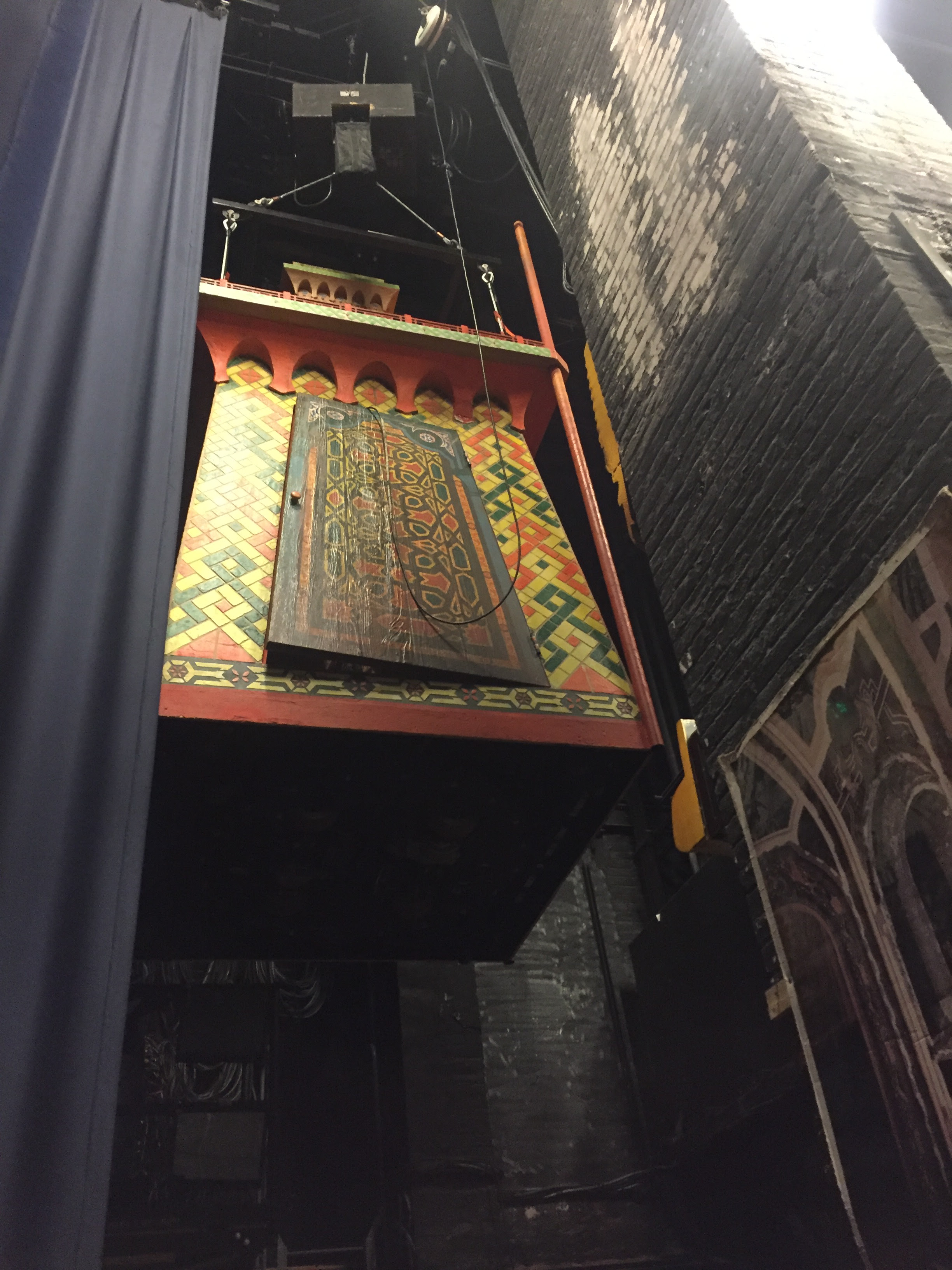 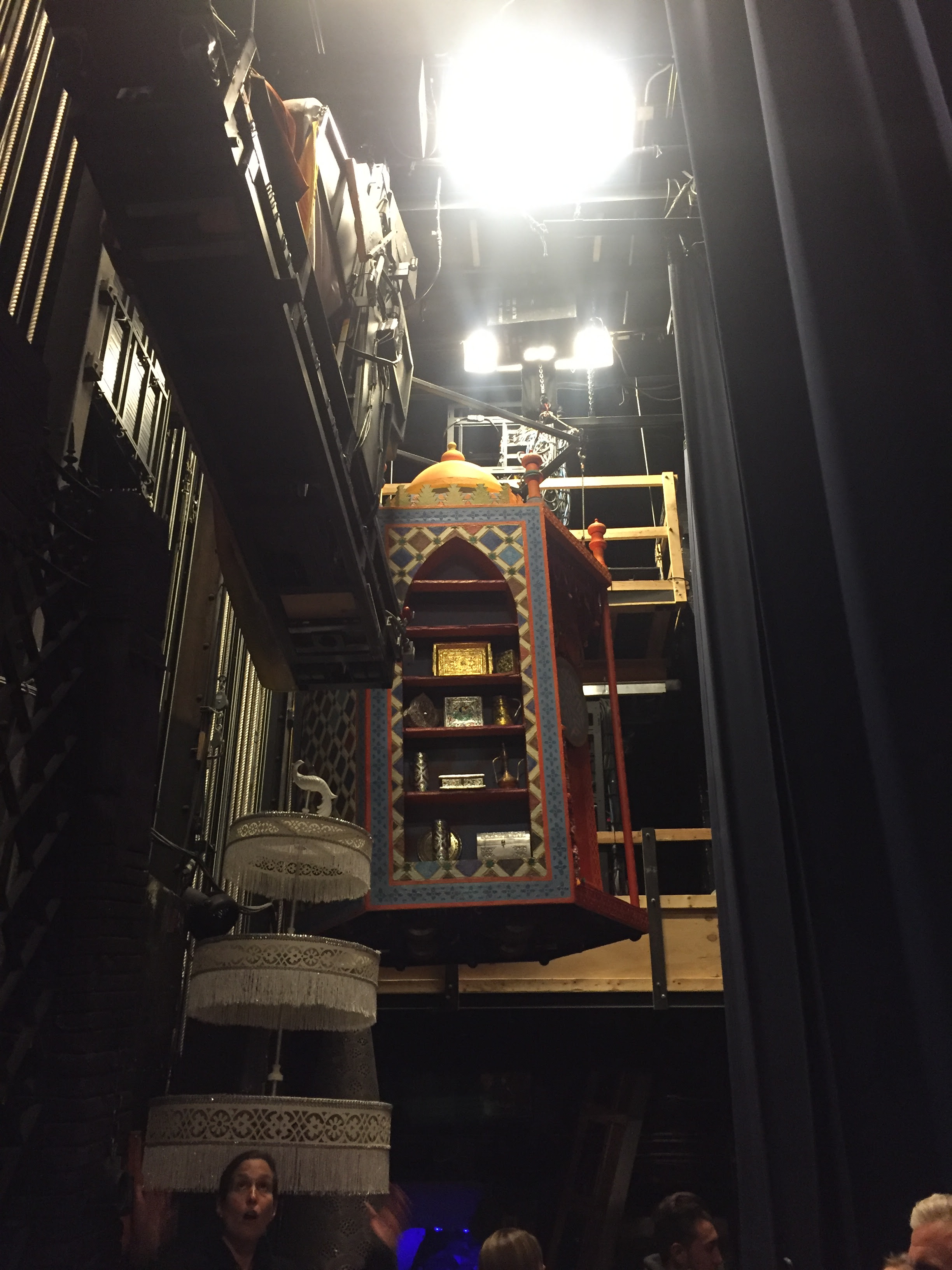 Here's a quick video giving you a more complete view:

After the tour was over, we got to walk out onto the stage and see what it felt like from that vantage point. It was quite humbling! We also got to see all the trap doors on the stage and how small they really are. Pretty amazing that the actors can fit through them. 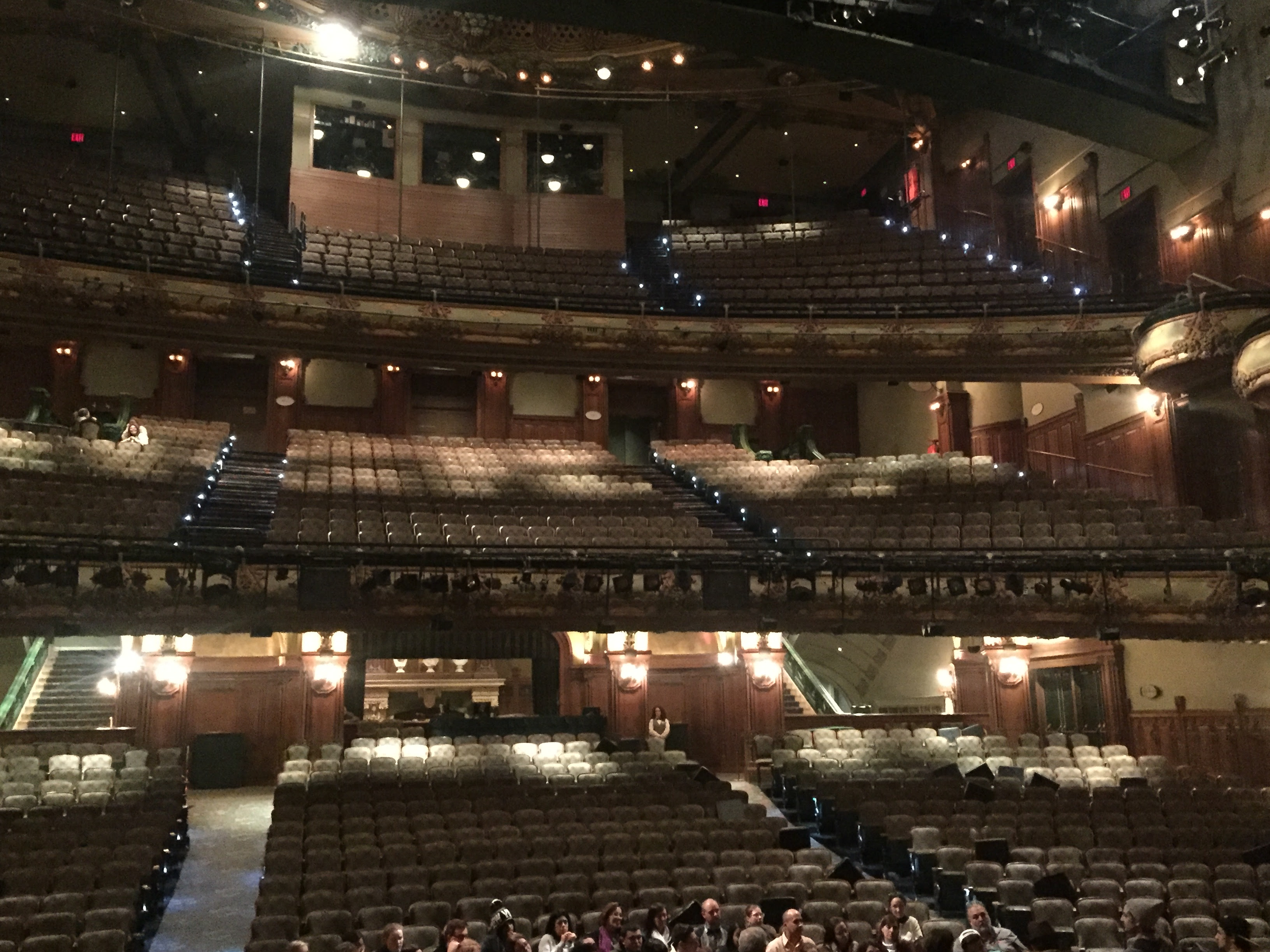 Last but not least, we were introduced to James Monroe Iglehart who plays Genie.

What an amazing first day we had in NYC! My Apple watch calculated my steps at 10,096, covering a distance of 5 miles. Not bad considering we were only there for half a day. We had so many more incredible things in store for the trip, that I knew this was only the beginning.
Posted by vanweezy at 12:27 PM