I'm a couple days late on this post, but my kiddo turned two months old on Monday!  We went to the doctor and found out he now weighs 14lbs, 1 oz and is 23 1/4 inches long.  Of course his weight puts him over the 97th percentile, lol.  He's a chunky monkey!  He got 3 shots at the appointment, and unfortunately they put him in a bad mood for the rest of the day.  But, the super exciting news surrounding his 2-month birthday is that he finally has started a good sleep routine!  We tried a couple new things, and he slept for 7.5 hours the first night (broken up into two sessions).  The next night he slept for about 9 overall.  This has been the biggest relief for me and Meezy lately.  You have no idea how stressed out we had become over Dutch's horrible sleep pattern.  Every night he would fight us for 2-3 hours and refuse to go to sleep.  When he finally did, he would only sleep for 1-2 hours at a time.  Meezy and I were taking turns performing the daunting task of getting him to sleep each night, and then I had to deal with the persistent overnight sessions of feeding, rocking, consoling, etc.  It led to us just being exhausted every day and we pretty much dreaded nighttime.  I don't think it was strictly the new things we tried that have helped him go to sleep and stay asleep; I think it also has to do with him just getting a little older.  Either way, we are thanking our lucky stars that we're (hopefully) past the horrific nights.  Here are some recent pics: 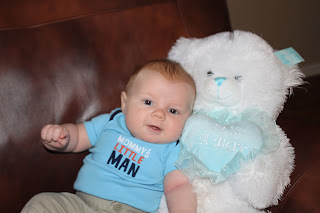 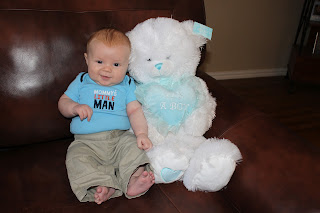