Friday afternoon, we began our adventure to D.C.  Meezy and I had never been before, so we were pretty excited about our short get-away to visit our nation's capital.  My nephew, Mark, and his girlfriend, Sarah, were our gracious tour guides for the weekend.  They picked us up from the airport and drove us to Hotel Lombardy, so we could check in and drop off our bags.  The hotel was really nice and extremely convenient for most of the things we wanted to see around D.C.  After that, we headed over to Tonic at Quigley's Pharmacy for some yummy grub.  They are known for their tater tots, that come with three dipping sauces, so we definitely had to order some.  They didn't disappoint.  With our stomachs full, we set out for our first long night of walking!

Our first stop was the Lincoln Memorial.  I've seen pictures of it numerous times, but I didn't realize how large the statue of Abraham Lincoln really is when you're up close.  I also didn't know it had a small museum attached to it.  I enjoyed reading some very profound, enduring quotes from Lincoln in the museum area.  The view from outside the memorial was amazing.  You could see the Washington Monument illuminated, with its perfect reflection shimmering in the Reflecting Pool.  Here are some pics from the first monument we visited:

From the Lincoln, we headed over to the World War II Memorial.  There was a column for each state and territory making up the United States.  There was a beautiful fountain in the middle, and a wall of stars.  It was an awesome sight to see.

Being on the National Mall is pretty incredible, because you can see The Lincoln at one end, the Monument in the middle, and the Capitol at the other end.  It's especially cool at night, because there aren't a lot of other distractions and the illuminated Monuments really grab your attention.  We headed over to the Thomas Jefferson Memorial next.  It's a little further of a walk, but we didn't mind it.  The building is impressive as you are walking up to it, and the interior includes a large statue of Jefferson.  Some of his famous quotes are inscribed on the walls. 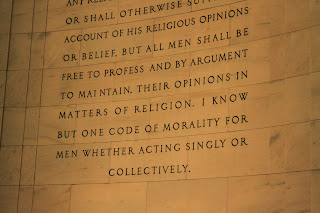 By this time, it was pretty late and we were exhausted from traveling and walking!  We walked by the White House on the way back to our hotel.  It was a great first night in DC, and we knew we still had a lot in store for us! 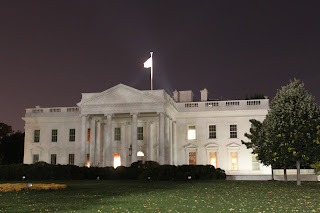