Our third day in Washington, we started out with an awesome brunch at The Boulevard Woodgrill.  French toast was exactly what I needed before another long day of walking!  Our plan was to visit the Pentagon 9/11 Memorial, Arlington National Cemetery, the Marine Corps War Memorial (Iwo Jima), the Netherlands Carillon, and the National Zoo.  We headed over to the Pentagon first.  In the picture below, you can see the center portion of the building is a different shade than the sides.  This is the part that was hit and has since been replaced.  The Memorial there includes 184 benches, one for each life lost, in chronological order of their date of birth.  The youngest victim was only 3 years old, and the oldest was 71.  If you're reading a name on a bench and facing the Pentagon, it means the deceased was in the Pentagon. If you're reading a name and facing away from the Pentagon (and seeing sky), it means the deceased was on the plane.  It was a somber experience to be standing in that area, but I'm glad we went. 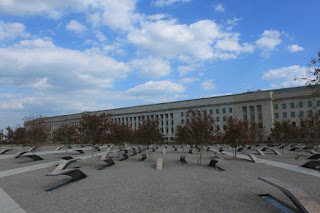 After leaving the Pentagon, we had planned on heading over to Arlington National Cemetery.  Unfortunately for us, the Marine Corps Marathon was going on and they had lots of streets blocked off for it.  There was no easy way for us to get to the cemetery, so we abandoned that idea.  Instead, we went to the National Zoo.  In case you didn't know, all the museums of the Smithsonian are free for visitors.  The Zoo was no different.  We just walked right in!  We checked out all the animals, with my favorites being the pandas and the gorillas.  I love visiting zoos around the country, so I had a great time. 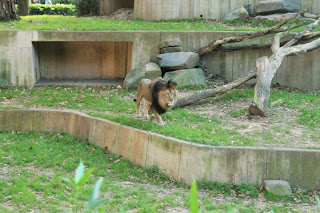 By this time, we were famished again, so we headed to Mark's girlfriend Sarah's neck of the woods (Adams Morgan).  We ate at a restaurant called Reef.  Any place that serves warm pretzels as an appetizer will get my thumbs up.  From there, we drove to the Marine Corps War Memorial.  This is such a famous statue, that I've seen pictures of a million times, but it was another instance where I just didn't realize how large it was until I was standing in front of it.  It was illuminated since it was nighttime, and it was a beautiful sight to see. 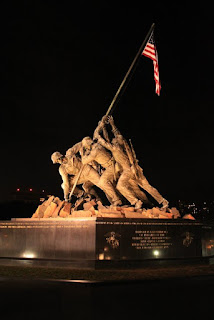 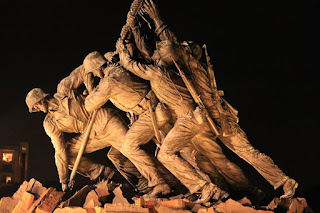 When you're standing at this Memorial, you  also have an amazing view of the Lincoln Memorial, the Washington Monument, and the Capitol building in the distance.  They are breathtaking at night. 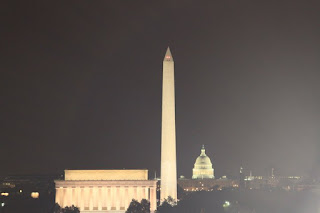 Nearby was the Netherlands Carillon, so we headed there next.  It is a bell tower given by Holland, in gratitude for American aid during and after World War II.  I know my Dutch grandparents were immensely grateful to the American people during and after the War, so visiting this site had a special significance for me. 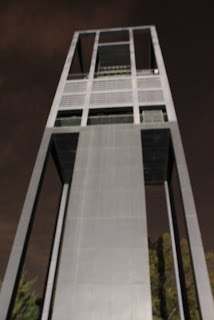 I think, by this time, we were all exhausted from this busy day, and the other busy days before it!  I noticed the lighting on the Carillon provided some pretty good shadowy silhouettes of us, so we goofed off for a while, making funny poses and laughing at our silliness.  It was a nice break from all the "busy."