Our last day in Washington, DC was a busy one!  We started out by visiting the Holocaust Memorial Museum.  I had been eagerly anticipating our visit to this museum because I obviously learned about the Holocaust growing up, but knew there was still so much more I needed to see.  Before entering, I saw this sign: 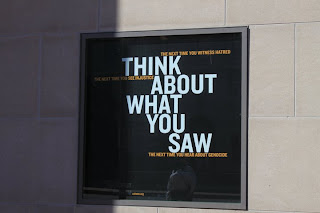 I knew that what I was about to see behind those walls would resonate with me for years to come.  It was an emotional experience.  Even though there are pictures, videos, first-hand accounts, etc, etc, about what happened during that time, it's still hard to wrap your brain around it.  As I walked through the exhibits, I felt anger.  I felt frustration.  I felt extreme sorrow.  I had moments where I felt so incredibly disappointed in the human race.  It's not easy to describe, but I think it's worth everyone's time to experience it for themselves.  There's a quote in the Museum that grabbed ahold of my heart:

If the Holocaust isn't the most profound example of why we have a responsibility to our fellow man, then I don't know what is.  It didn't just take Hitler and the Nazis to perform this egregious act.  It took countless others who did nothing to stop them.  There were people who stood up, but there weren't enough.  I hope I never forget this lesson.  (On a related note, it used to slightly piss me off when people would unjustifiably compare Obama to Hitler to get attention and create fear.  Now, it makes me furious.  In my opinion, people who try to make that comparison are disrespecting the millions of people who lost their lives in the Holocaust.  Find a more appropriate criticism when you merely dislike someone, asshole).

After the Holocaust Museum, we headed over to the Capitol for our guided tour.  I was completely clueless as to what the Capitol's interior looked like.  I was surprised at how elaborate it was.  It was cool to think about the important people in our nation's history who had stood in the same places I was standing.  While we didn't get to see the House or Senate Chambers because they required an additional pass, we did get to see the Rotunda, the Old Supreme Court Chamber, and the National Statuary Hall.  Check out some pics below: 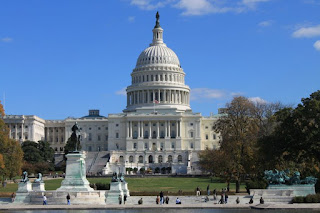 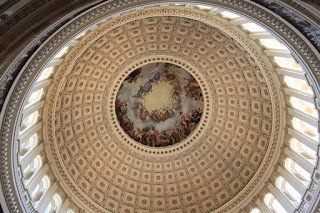 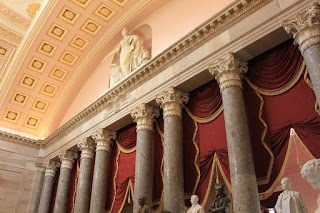 While leaving the Capitol, we saw the Supreme Court.  We didn't go inside, but just seeing the exterior of the building was a treat.  Quite a formidable structure! 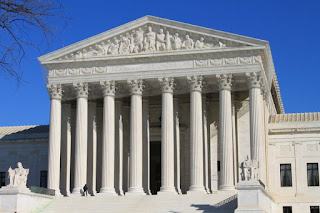 By this time we were starving, so we walked over to Good Stuff Eatery.  There wasn't anything spectacular about the burger I got, but my Cookies and Cream shake was delicious (thanks to Sarah for suggesting it!).  From there, our next stop was the National Air and Space Museum.  This was Meezy's choice, so I let him set the pace and decide which exhibits to check out.  Tracking the history of air and space travel from its earliest beginnings to now is a mind-blowing journey.  I'm pretty amazed at the bravery the pioneers must have had to get us to where we are today.
Our last stop for the day was the Human Rights Campaign store near Dupont Circle.  I shop online with this organization, but I thought it would be neat to visit their storefront, since the one in DC is the closest one to me!  Meezy and I picked up a few more items and then set out for our long trek back to the hotel!  All in all, I think we walked about 6 miles this day.  This wouldn't seem so bad, except we had done the same the three previous days!  It was quite an exhausting trip, but worth every minute.  I'm so glad we were able to mark our nation's capital off our list of places to visit.  Still a lot of destinations left, but we're working on it!
Posted by vanweezy at 9:30 PM