This was the day of the big rally, so Meezy and I headed over to the National Mall around 10:30am.  It was already pretty crowded by this time, even though the rally wouldn't technically start until noon.  We walked as far up as we could, to about 4th street, but there was absolutely no more room for us.  We started walking back down the Mall, away from the stage, and got to 7th street before there seemed to be a break in the crowd.  We jumped in and found a spot that would give us a view of the satellite screen and be in earshot of one of the speakers.  Even though we were nowhere near the middle of the Mall, we figured this was good enough.  As it got closer to noon, our area started getting packed and it became shoulder to shoulder.  People were everywhere!  They spilled out onto side streets, and stretched almost down to the Washington Monument.  This was our vantage point, from four blocks away from the actual stage. 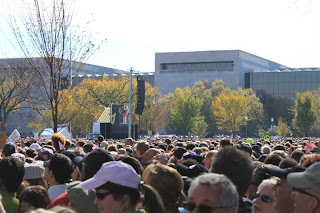 I had read some tentative schedules listing who would be performing/appearing at the rally, but we weren't sure who would really be there.  When it was all said and done, we had seen Jon Stewart, Stephen Colbert, The Roots, John Legend, the Mythbusters guys, Sam Waterston (of Law and Order fame), Cat Stevens, Ozzy Osbourne, The O'Jays, Mavis Staples, Jeff Tweedy, Mick Foley, Sheryl Crow, Kidd Rock, Kareem Abdul-Jabbar, Tony Bennett, and the Daily Show Correspondents.  It was a fun show!  The best part was Stewart's speech at the end of the rally. I could embed it here, but since it's 12 minutes long, I'll just include my favorite quotes from it:

"But we live now in hard times, not end times."
"If we amplify everything, we hear nothing."
"You go, then I'll go."

It was refreshing to hear someone speak about how our country ISN'T headed towards doomsday, and how people work together to get things done "every damn day" despite what some people like to report.  It was also nice to be surrounded by people who are frustrated with the current political and news media climate, but prefer rational discourse over yelling and hyperbole.  Lastly, humor is such a welcome refuge when things seem to get overwhelming or completely unreasonable.  It helps keep us grounded and SANE.  On that note, here are some of my favorite signs from the event:

Islam isn't a threat to my country. Racism and ignorance are. 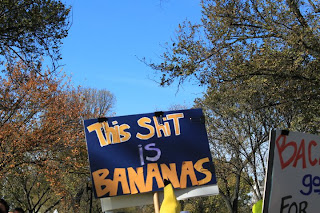 After the rally was over, Meezy and I grabbed some food so we could rest our tired legs and feet and watch some college football.  It was a nice break after having stood, many times on our tippy toes, for the past 4 hours.  From there, we hopped on the Metro to make our way to my nephew Mark's house in Arlington, VA.  We relaxed and watched the Rangers game for a while, and then headed out to Hard Times Cafe in Clarendon.  They were having a costume contest, and Mark and his friends entered.  I'm not sure exactly why Mark's friend won first place, but here's his costume:

Arab Lego Man?!?
After the contest ended, we headed back to our hotel to get some rest before our next big touristy day.  There was still so much left to do!
Posted by vanweezy at 3:30 PM