I bet you thought this post would be about the Texas Rangers, but it's not!  Anywho, on to the real reason I'm writing - sometimes it's frustrating to live in a state that has a reputation for being very conservative and being full of evangelical Christians, when I'm neither of those things.  Whenever articles that mention Texas are shared on major sites (reddit, for example), I read plenty of comments about what people think of us hicks down here in the state that wishes it was its own country.  I'd just like to point out that we're not all gay-hating, creationism-spouting, evolution-denying, Muslim-fearing, pro-life, gun-toting, Bible-thumping, pro-war citizens like some of the rest of the country (and world) like to believe.  Granted, some Texans are all of those things, but there are quite a few of us that are none of those things.  I wish our state would turn away from these stereotypes and start to show a more progressive front.  I know that a lot of our reputation was understandably earned since we had George Bush and Rick Perry as the faces of Texas over the past 15 years, but it's time to move past that.  My hope is that Bill White will become the next Governor of Texas and start pushing us towards a less embarrassing direction.  However, if that doesn't happen, it can start on a smaller scale.

Recently I was shopping on the Human Rights Campaign's website, and found a couple of shirts that I fell in love with.  Here's the first: 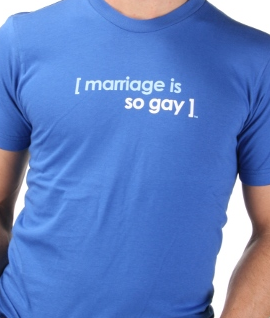 That shirt is just hilariously awesome and I immediately wanted to buy it.  Before I could add it to my cart, though, I started worrying about what people would think when they saw me wearing it.  In Texas, it seems to be easier to be loud and proud about being a homophobe, than be vocal about being a homosexual (or ally, as my husband and I are).  The frustrating thing is that this perception is perpetuated when people like me worry about others' opinions when wearing a shirt like this (well, maybe not so far as perpetuating it, but certainly not refuting it).  It's a freaking shirt, for goodness' sakes!  In other words, I'm part of the reason we Texans are stereotyped the way we are, if I don't do anything to change it.  I told Meezy about my dilemma and he didn't skip a beat. "I'd wear it."  Damn, I love that guy.  So, the shirt went in the cart and you can consider it on its way!  Watch out, Texas.

The second shirt I fell in love with was this:

With the Colbert/Stewart rally coming up in Washington, D.C., I was hoping for a way to show I was from Texas, while also giving a quick glimpse into my beliefs.  I am a supporter of equal rights in Texas, and I shouldn't be embarrassed about saying so.  Unfortunately the shirt won't arrive in time to wear to the rally, but I'll make sure it's put to good use whenever it does arrive.

I am proud to be a Texan, but not because of its infamous reputation.  There are times I have wished I lived on one of the coasts, where people tend to be more open-minded and accepting of those different from themselves.  I always remind myself that there are lots of people in Texas like me, but some of them are just currently afraid to say so.  The longer I stick it out, and the more I speak up, the more the open minded folks will start to show themselves.  I would love to be proud of Texas because of its equal rights stance.  I just hope I'm around long enough to see that day come.
Posted by vanweezy at 5:15 PM