Apparently that's my motto because I certainly didn't get enough sleep this weekend!  On Friday, Meezy and I, along with some friends who had come in from out of town, headed out to Arlington to support our friend, Michael Hix.  He was having his CD release show at the Arlington Music Hall.  He put on a great performance, just as he always does!  We got stuck in the traffic leaving the Rangers game after the show, so we just decided to head home instead of going out.  We stayed up until about 2:30am, though, reminiscing about funny stories from college.  Normally that's no big deal on a Friday night, but I had to be up at 6:15 the next morning for the Komen Race for the Cure.  Nothing like running 3 miles on less than 4 hours of sleep!  My sister Jo and my bff Jenn were running it with me, so that made it much more enjoyable. 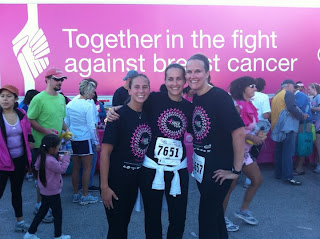 After the race, Jo and I met up with the huge group of family and friends of Dianne Horton who were walking in her memory.  It's barely been a month since Dianne's passing, so I know this was an emotional event for them.  It was so nice to see them all there, celebrating her memory, while raising awareness and funds for breast cancer research.  They carried signs and wore ribbons and buttons to honor their loved one. 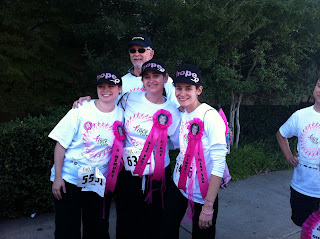 Husband and daughters of the late Dianne Horton
Later that day, my family headed to La Grange in Deep Ellum to attend the benefit the Horton family was hosting in Dianne's honor.  They raised money through a $10 entrance fee that covered food and entertainment, and then sold raffle tickets for various prizes like Komen swag, a massage, Mavs tickets, etc.  Overall they raised more than $900 for Susan G Komen!  It was a great success and everyone there had a wonderful time.  My niece, Livi, wore a special shirt to commemorate the occasion.  I hope its message is true! 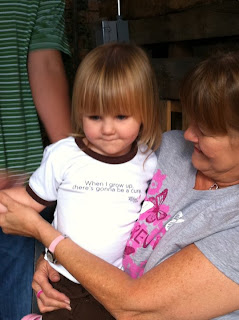 "When I grow up, there's gonna be a cure"
We ended up going to Black Finn in Addison later that night, which meant another late bedtime.  On Sunday, I had a tennis match at 10am and another at 1:30pm.  The second one ended up going to three sets, which brought the total time played to 4 hours for both matches.  Under that sun, that was quite draining!  After that, I came home and tried to steal a nap during the Cowboys game.  That was only mildly successful, and then it was up and at 'em again to meet Michael Hix and his girlfriend for dinner at Matito's.
My weekend was really a lot of fun, and I wouldn't have traded any of those activities for sleep, but that doesn't change the fact that I've got a raging headache and droopy eyelids today!
Posted by vanweezy at 5:00 PM