Let Me Catch My Breath!

I'm quite exhausted after this weekend's activities, but I had a great couple of days.  I love living in the DFW area, because there is never a shortage of fun things to do.  On Friday night, we hung out with our friends, Jonathan and Rose.  Jonathan's dad owns Boi Na Braza, the Brazilian steakhouse, so we went there and stuffed our bellies full of delicious food.  After that, we headed over to Verizon Theater to watch Joel McHale perform.  McHale is the guy who hosts The Soup on E! and also stars in Community.  I love his work on both of those shows, so I was very excited to see him do some stand-up.  He gave a great performance, as expected, and we left the theater wishing he had done an encore! 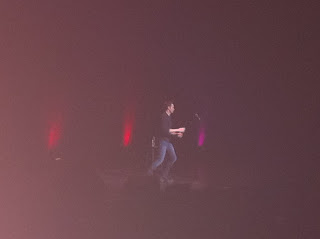 The iphone4 camera doesn't do so well in dark settings
Saturday morning we were up bright and early to make our way to Fair Park to watch Texas Tech and Baylor play in the Cotton Bowl.  We went with my sister Jo, (a Baylor alumna), and her hubby Trey, and sat on the Baylor side.  There were very few red shirts on our side of the field, but that was okay!  We cheered loudly, nonetheless, much to the dismay of the attendees near us.  At halftime, we went out of the stadium to spend a few minutes at the Texas State Fair.  I satisfied my Dippin' Dots craving, (how long can they call it the ice cream of the future?) and the guys tried out "Donkey Tails" (not sure who came up with that name, but I salute them).  A donkey tail is a beef sausage filled with cheese, wrapped in a tortilla, then deep fried and covered in chili.  Yeah.  After that, we headed back into the stadium to catch the rest of the game.  Did I mention the sun was ridonkulous?  We all got sunburns on the left sides of our faces, arms, and legs.  Gotta love getting a farmer's tan in October.  Meezy and I stuck around as long as we could, but we had to leave in the fourth quarter since we had tickets to the Rangers playoff game.  We listened to the end of the football game on the radio and were happy to hear that the Red Raiders came up with the win! 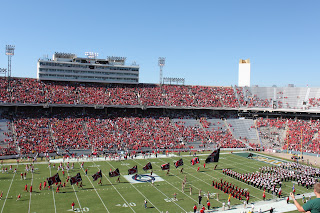 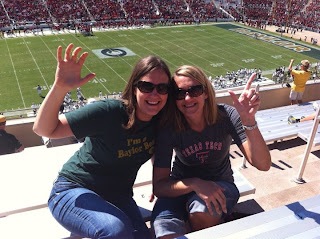 Sisterly Rivalry
Our drive to the Ballpark in Arlington wasn't as bad as we thought it would be.  Parking?  That was another story.  We drove around for at least 15 minutes and found every lot to have a "Full" sign on it.  Cripes!  We finally found an open lot, way out in BFE, for $10.  Whatevs.  I mapped the distance from our car to the ballpark, to make sure we could find our way back, and it was 1.2 miles.  Gotta love paying $10 to park, just to walk more than a mile to get to your destination!  It was rapidly approaching the start of the game, so Meezy and I found a guy with a rickshaw for hire to take us to the game.  Best idea we had all day!  We cruised on by all the walkers and got dropped off right at the entrance.  We got in the ballpark, sprinted up seven flights of stairs, and arrived at our seats just in time.  They were up in the 3rd level, on the first base side, which I thought would be a really bad view of the field.  I was pleasantly surprised to find out I was wrong!  They were actually really nice seats, and the best part was that they were in the shade!  Thank jeebus.  I don't think I could've handled another 3 hours in the hot sun.  My parents were sitting with us, and we all had an awesome time cheering on the Rangers.  It was sad that they ended up losing, but I'm so glad we went to that game.  I had definitely never seen the Rangers in the ALDS before, and who knows when I'll be able to see them there again!  The atmosphere was really electric, and the excitement in the crowd was so contagious. 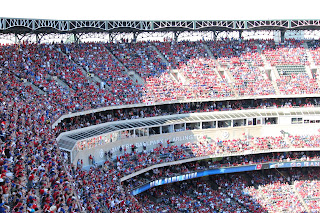 A great experience for Rangers fans 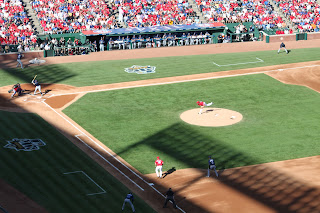