Not that every day hadn't been amazing, but I was especially looking forward to this day of our trip because we had a couple fun items on the to-do list. We didn't have breakfast at our hotel, so we walked to the nearby Mosae Forum and grabbed a quick bite at the Jumbo (grocery store). There were a couple items that cracked me up and I couldn't resist snapping a pic. 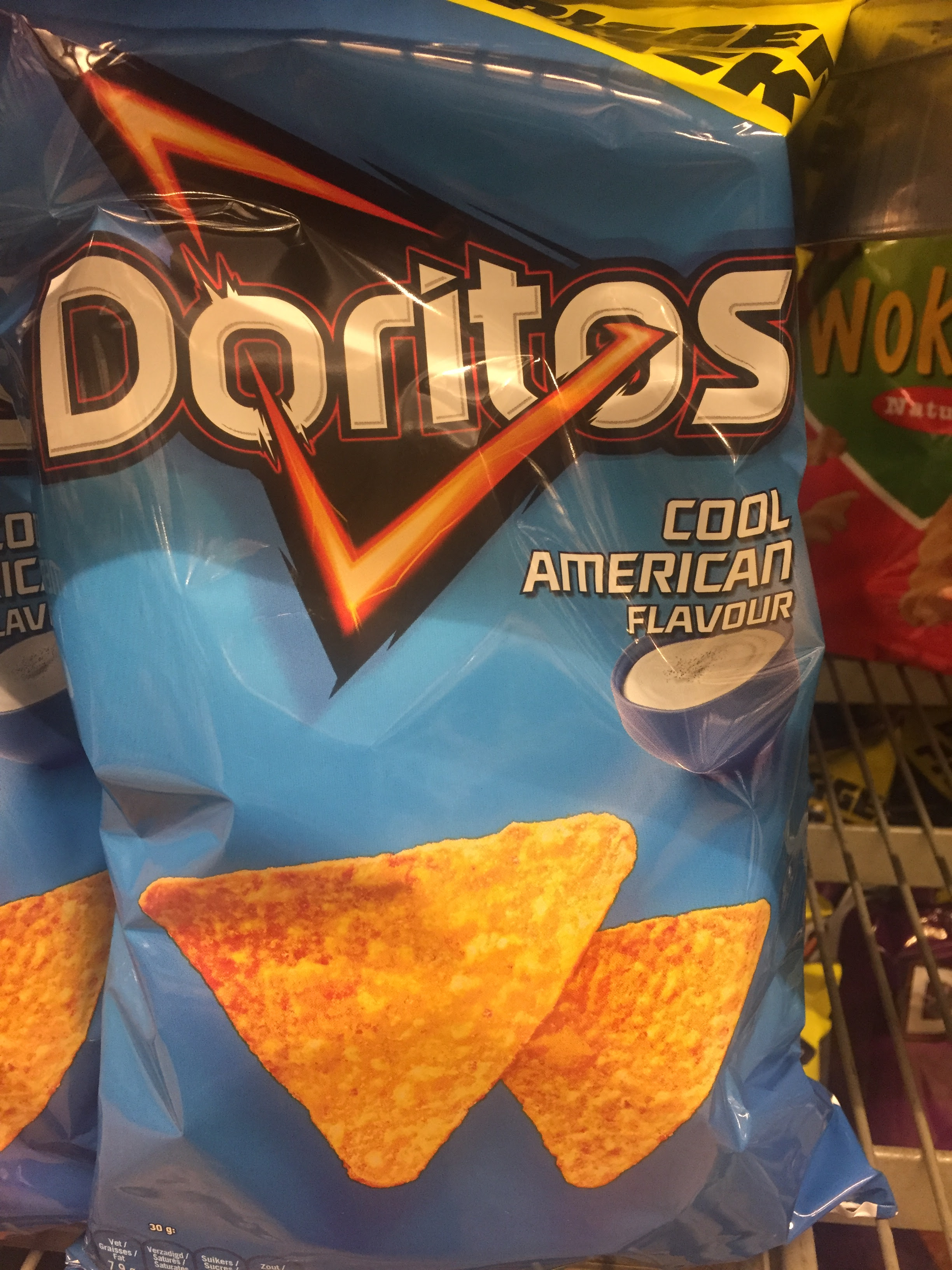 Hey, those Europeans like us. They think we're cool. Wait. This is how they really feel.

The best part of this jaunt into the grocery store was what I found on this aisle however: You can't call yourself a Dutch person if you don't have a box of De Ruijter chocolate sprinkles in your cupboard at all times. But, living in Texas, I am typically very limited in my options and have to spend $4 - $5/box. My sister and I were in heaven when we saw these shelves. They had way more varieties than we had ever seen and most boxes were under 2Euro. You bet your ass we both snagged some. When I turned the corner and saw Stroopwafels and Verkade cafe noir cookies on the cheap, they found themselves a spot in my shopping basket too. (Sidenote: I typically buy these items at Henk's European Deli off NW Hwy in Dallas, or at World Market). It felt like Christmas to see the items I love so much for half of what I normally pay. It's a good thing I couldn't take much more home with me, or my waistline would have gotten a lot bigger after the trip was over.

Because the shopping malls weren't open yet (they open late on Mondays), we walked around Maastricht and found the old Dominican church that had been converted into a bookstore. It's such a cool idea and is fun to walk through. 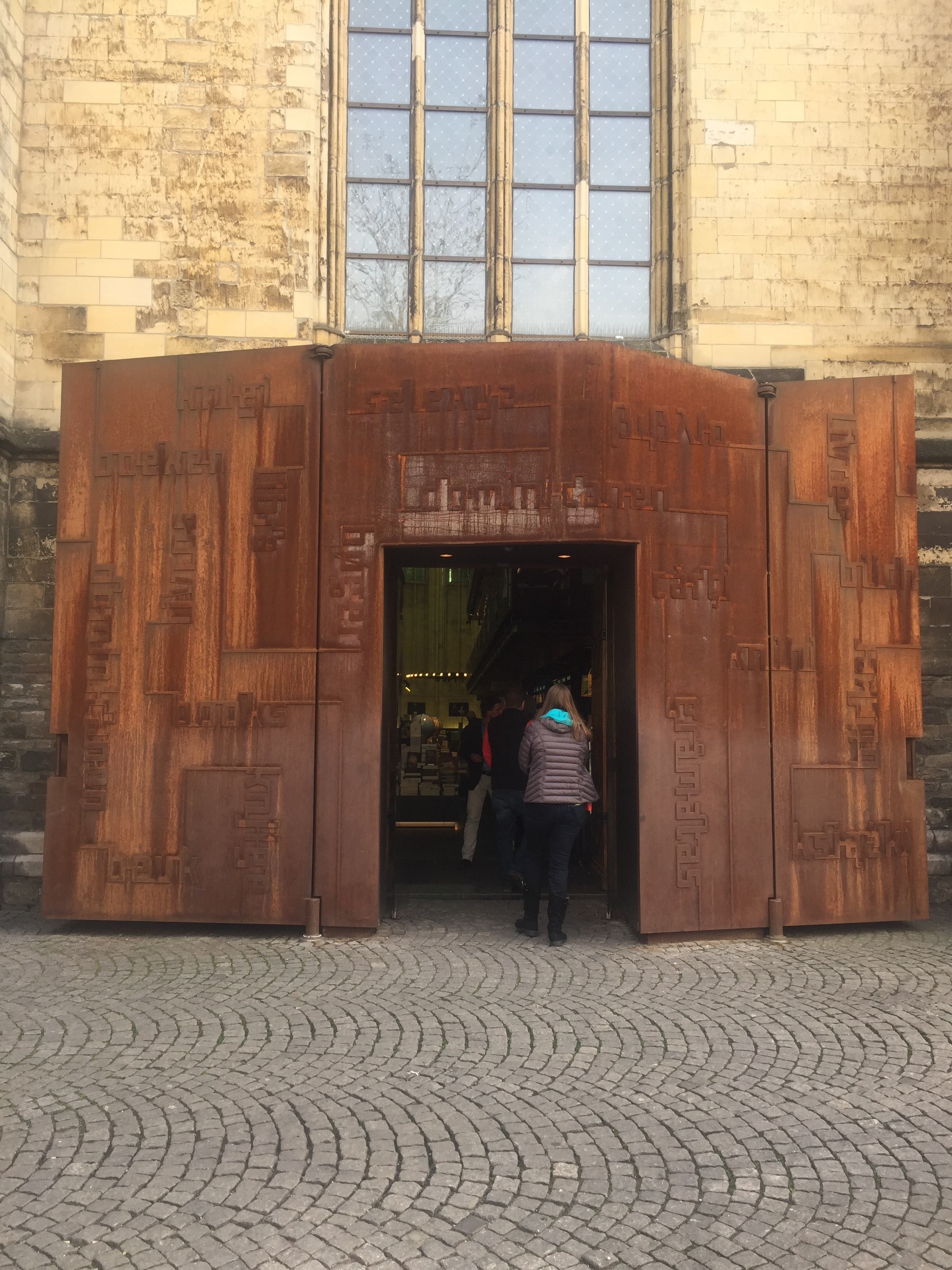 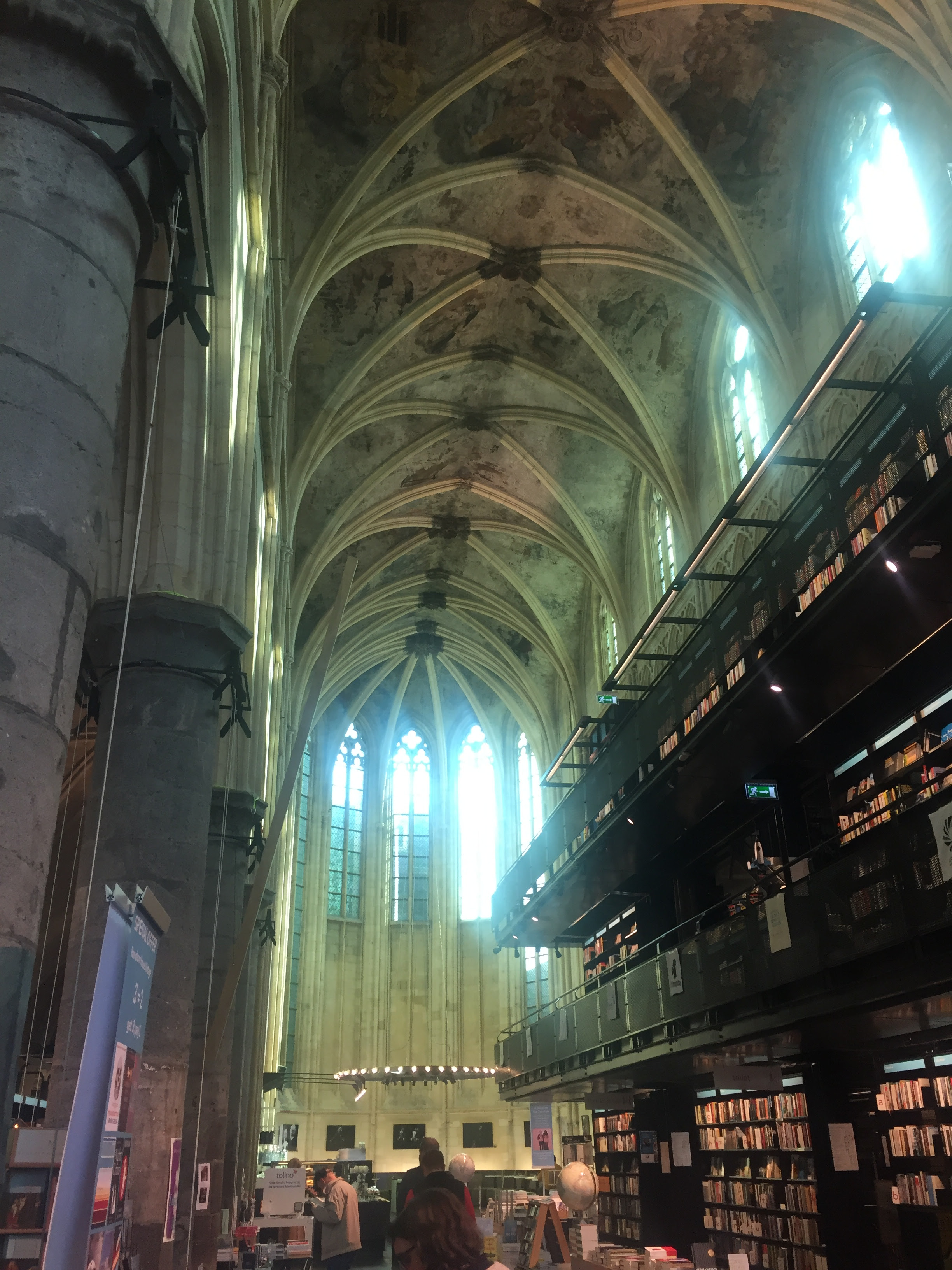 From there we headed to the Vrijthof Square, which is in the center of old town Maastricht. There are various restaurants, churches, and other architecturally-interesting buildings surrounding it, so we ambled around and took in the sights. By this time, we needed to hit the road for our first adventure of the day, so we walked back to our hotel to pick up our car. We had a lunch date planned with our former exchange student's aunt who lived 30 minutes away in Geleen. Meezy and I met and spent time with her the last time we were in Europe, but my sister and her husband had never met her. When we arrived to her house, we were greeted with the most impressive lunch spread! She really outdid herself and prepared soup, salad, an assortment of breads, cheeses, meats, fruits, and pastes. It was seriously the most beautiful table! 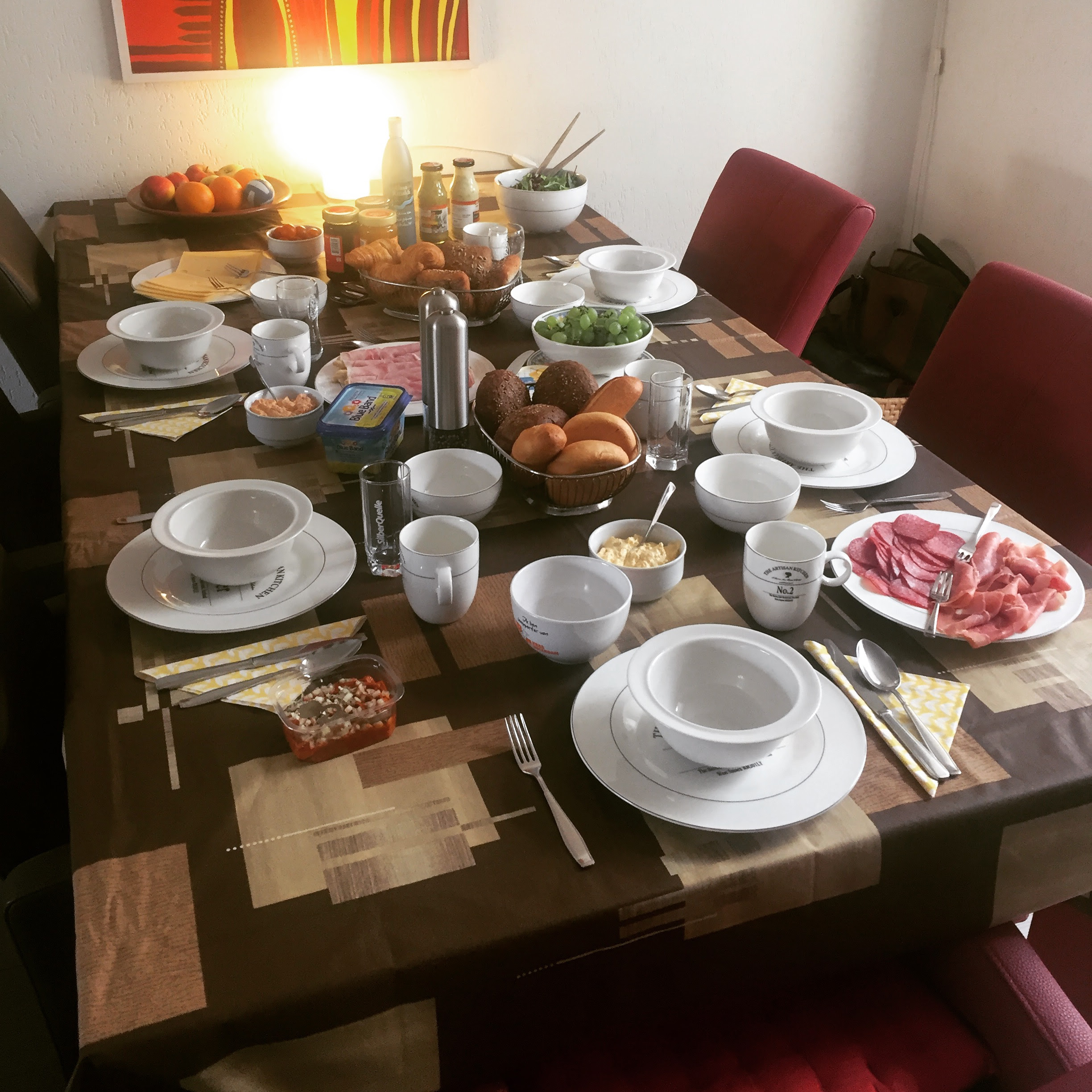 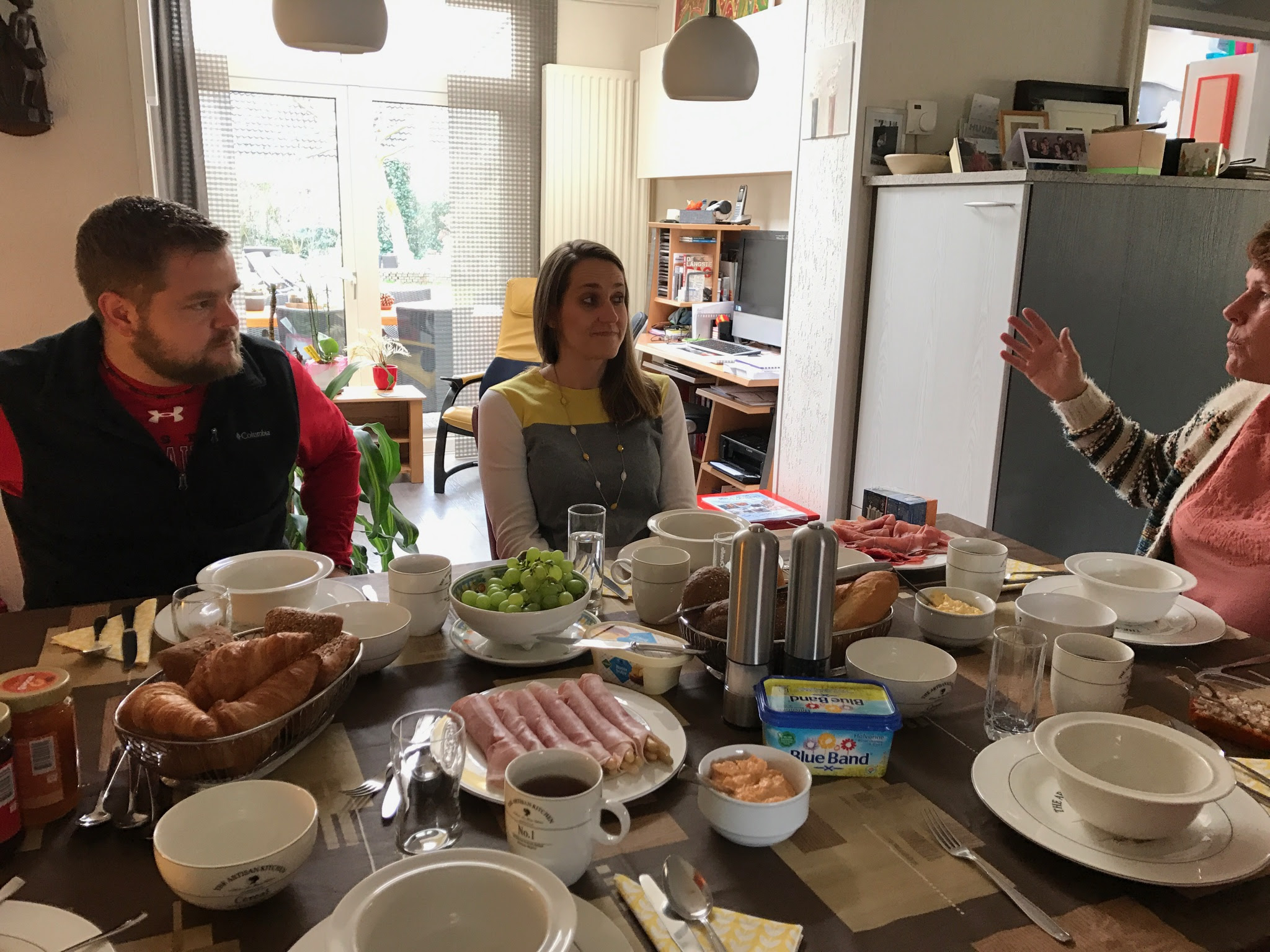 We had a wonderful time visiting with Renee and she kept us laughing constantly. Dutch women are known to be observant, blunt, and honest, and she is no exception. That's why I love spending time with her! I'm still trying to convince her to plan a trip to visit us.

After lunch, we headed back to Maastricht so the girls could shop and the guys could drink. It's fun to walk through clothing stores you've never heard of before and try on things you could never find back home. My sister had also been telling me about a waffle shop called Pinky that I needed to try, so we found one and I obliged. It's hard to beat freshly baked, warm waffles, but they found a way. You want chocolate inside the waffle? You got it. You want ice cream on top? Sure. 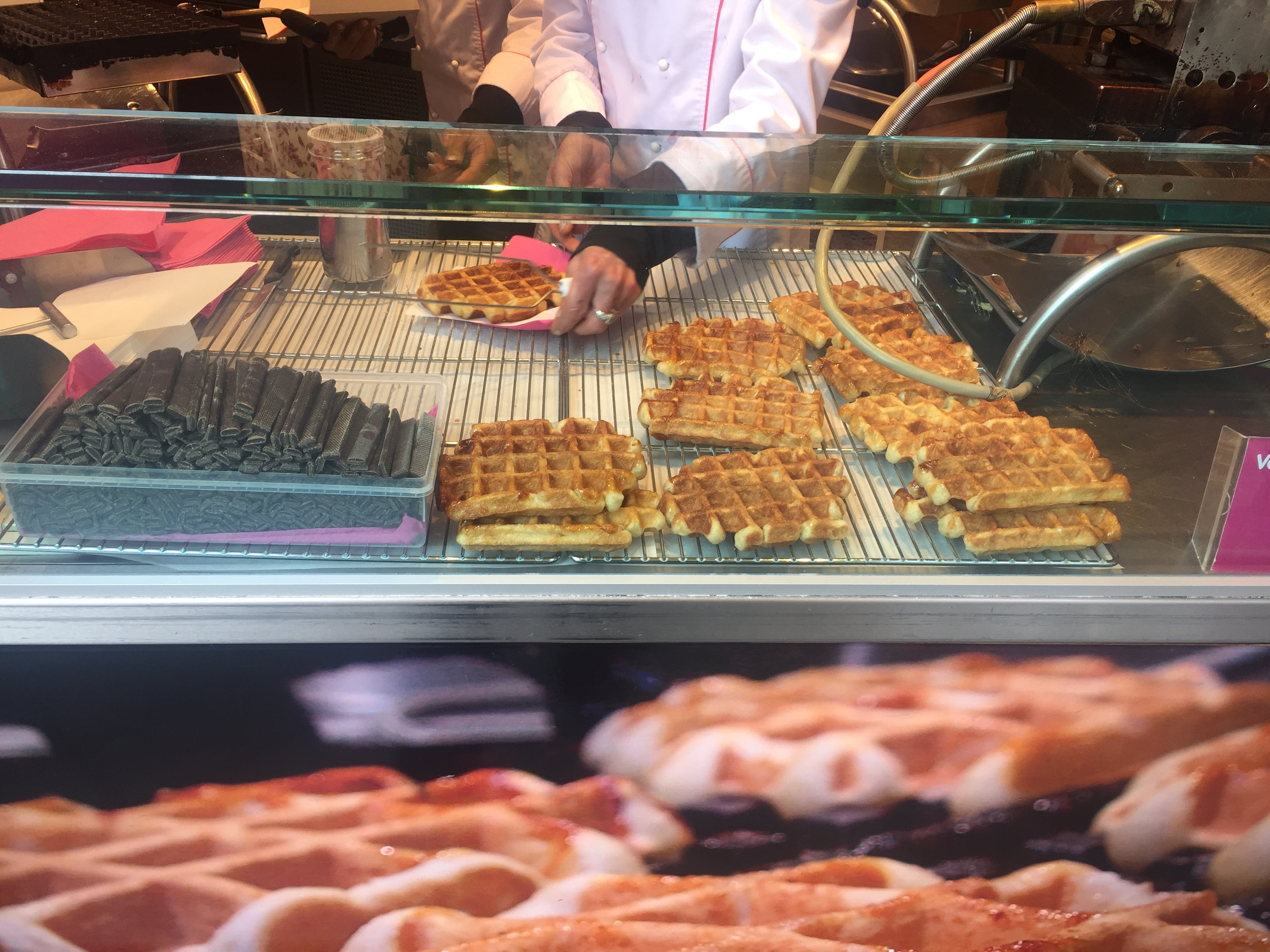 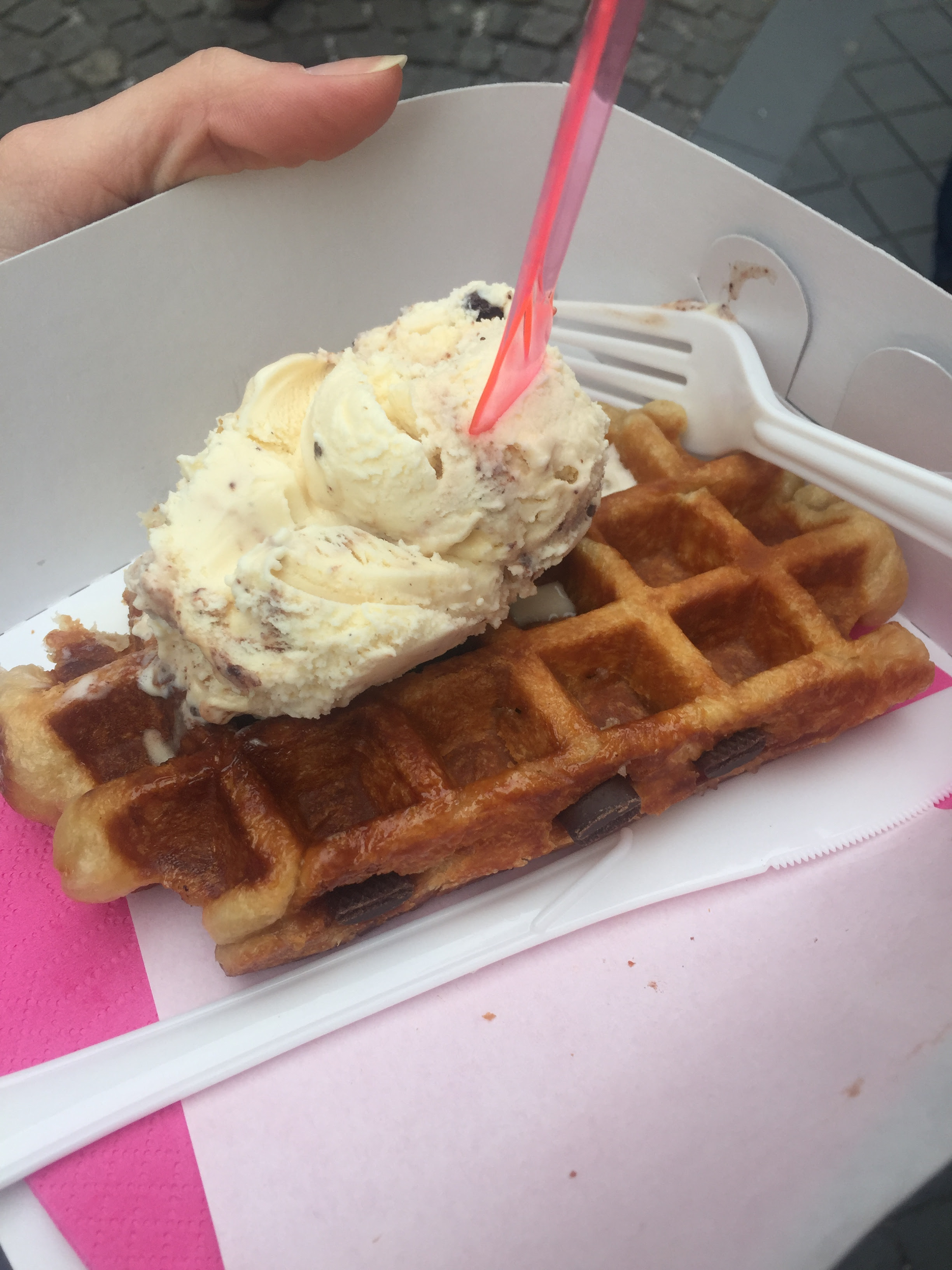 Who cares about the calories when they taste so good?

The guys had posted up at a bar called Old Dutch while we shopped, so we went there after to meet up with them. Shortly thereafter, our relative Patrick brought his son (Dennis) and father (Cor) to hang out with us. Patrick's daughter, Sanne, happened to be nearby with her boyfriend, so they joined us as well. I had never met any of them before, so it was neat to get acquainted. Cor was the one who originally found us on Facebook and established our familial connection, so we really had him to thank for this meeting! We laughed and drank and shared stories and then took some pics to commemorate the occasion. 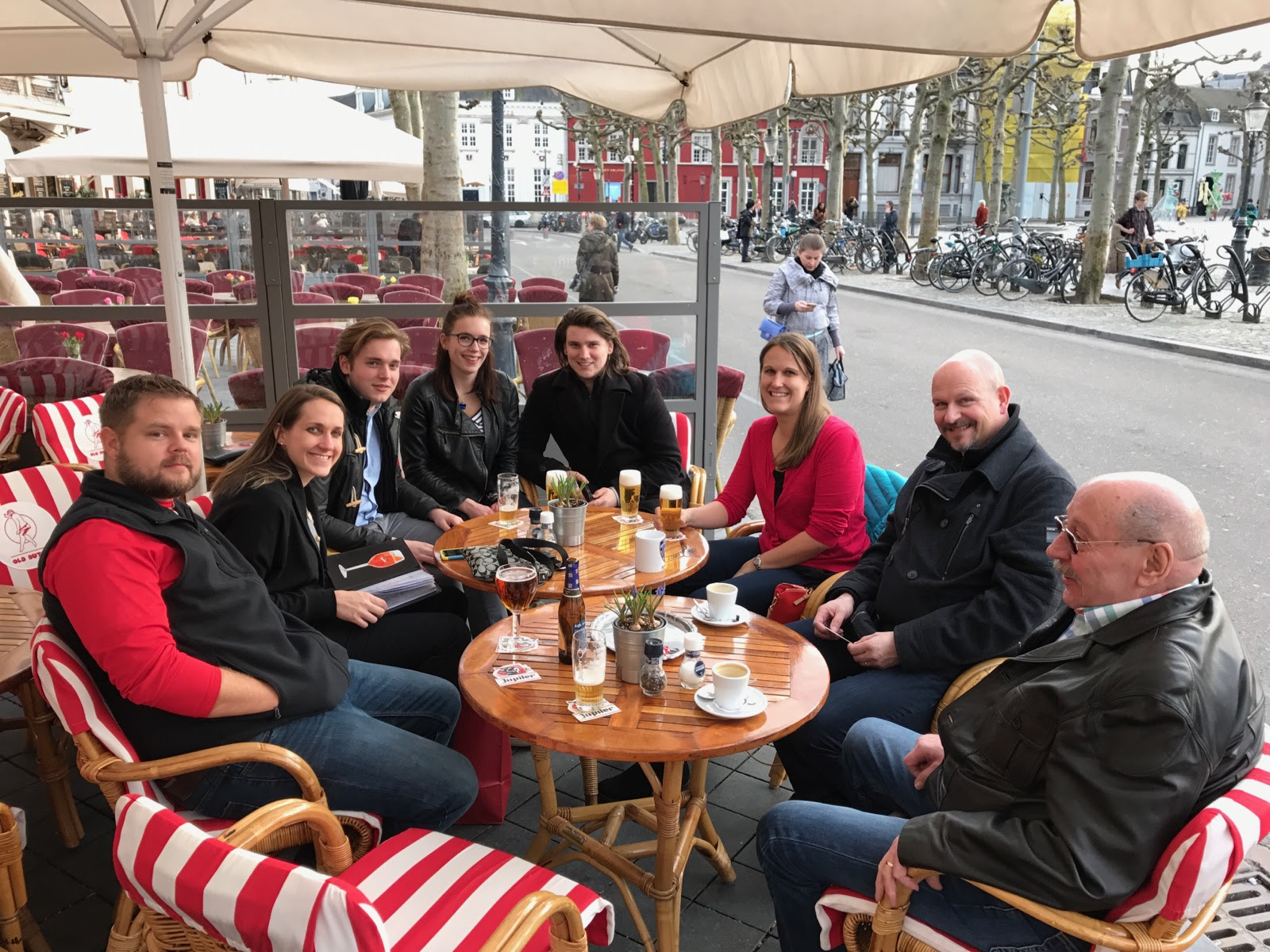 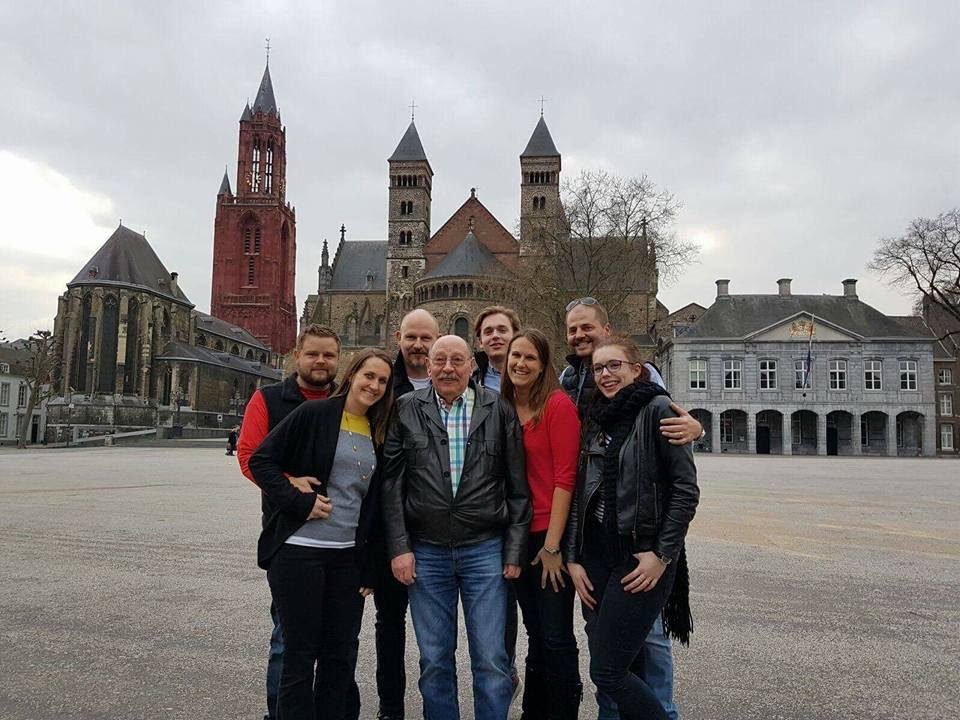 As it got closer to dinnertime, we said our goodbyes to Patrick and Cor and headed back towards our hotel with the young relatives. We passed a Musti Doner Kebab food truck on the way and, given it's one of my sister's favorite foods, we figured we'd give it a shot. It did not disappoint! The falafel was excellent and their spicy red sauce on top of french fries was THE JAM. 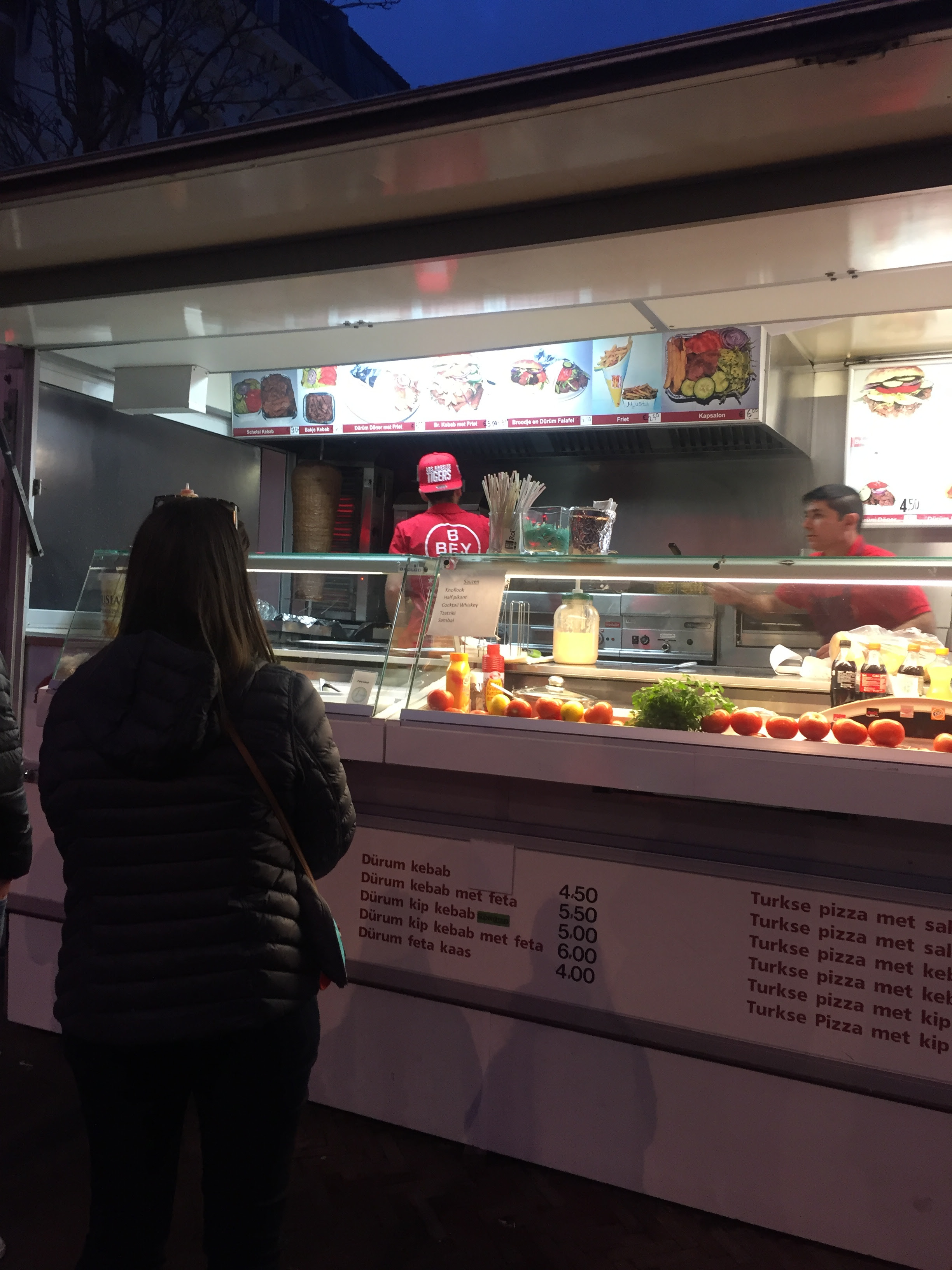 After our quick bite, Sanne and her boyfriend bid us farewell, and Dennis and the four of us set out for the piece de resistance of the day. We had tickets to a soccer game! But, it wasn't just any soccer game. The home team was the team my Opa (grandfather) played for about 70 years ago! I'd always been told about Opa's stint playing semi-professional soccer for a team called MVV in Maastricht, but to actually be at their stadium and watch them play took it to a whole new level. I was giddy! The game was awesome and MVV played well. We had great seats, but I don't think there was a bad seat in the place, really. I loved looking around the stadium at all the signs and artwork. I bought an MVV jersey at the fan shop for Dutch to grow in to. It felt surreal to be watching the team my Opa played for so many years ago. For those couple hours, I felt closer to him and closer to my heritage. I know it's sappy, and I know you might not understand, but it's a feeling I won't forget and I hope to feel it again someday. 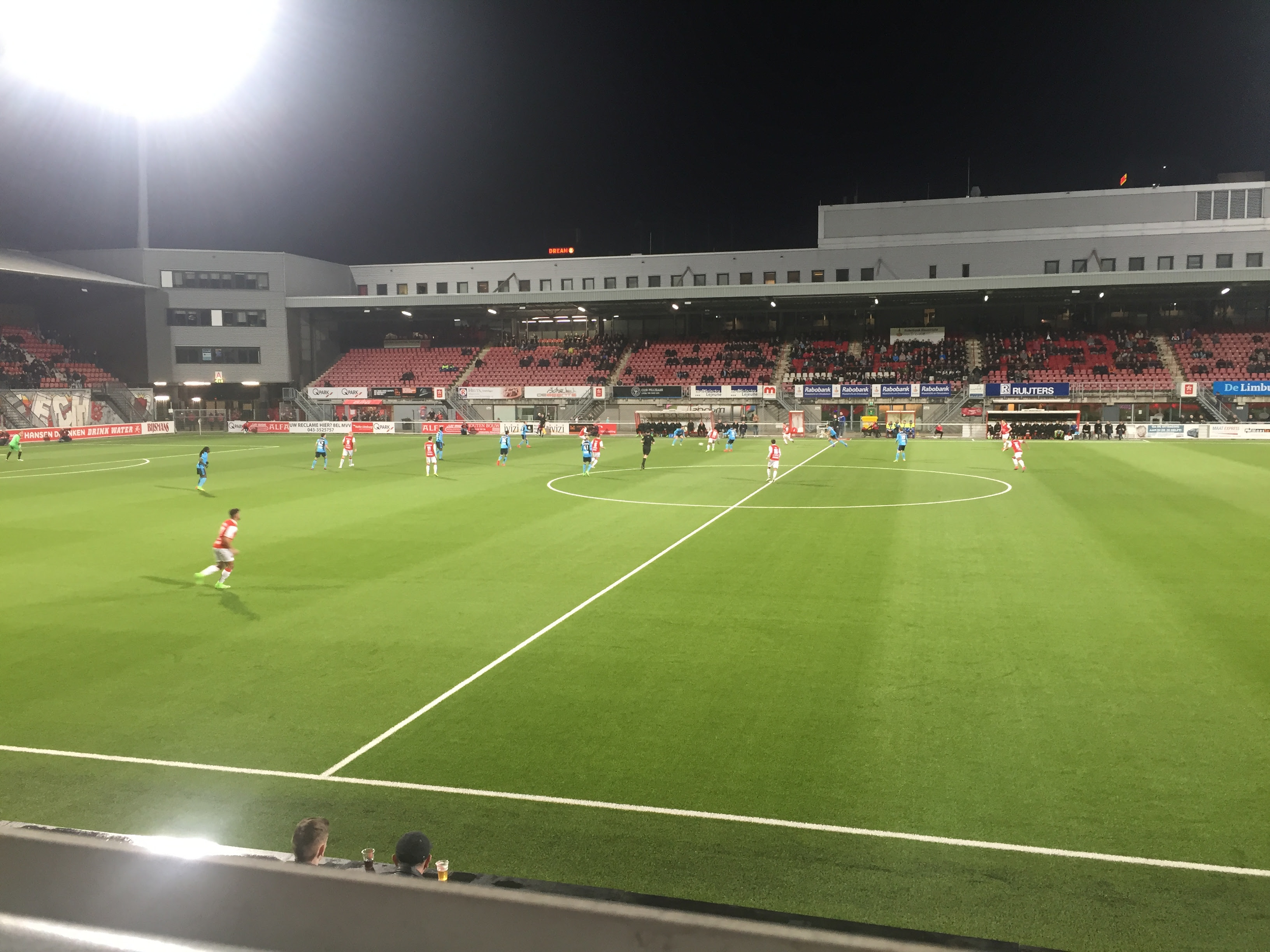 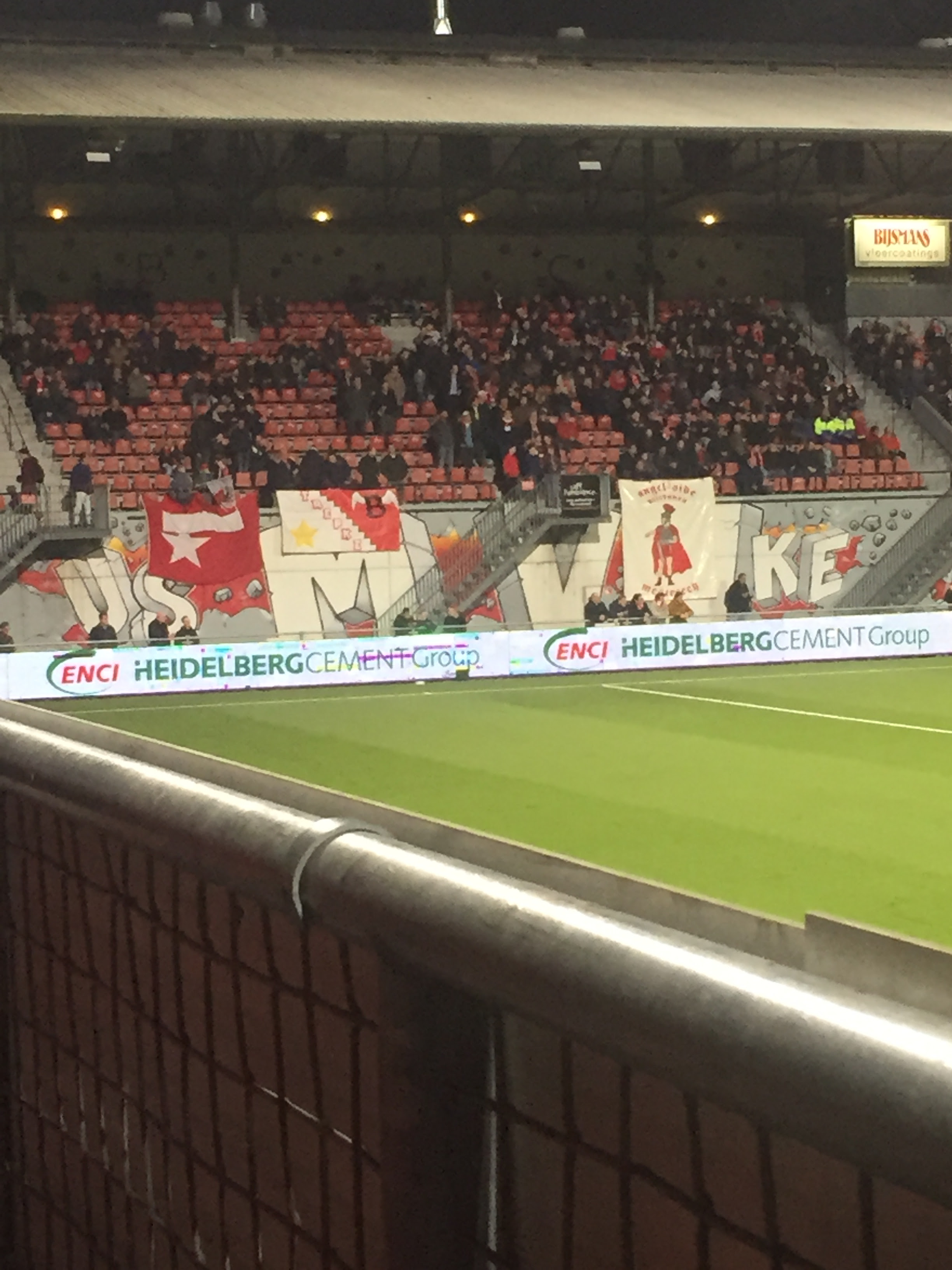 "Us MVV'ke" means our little MVV 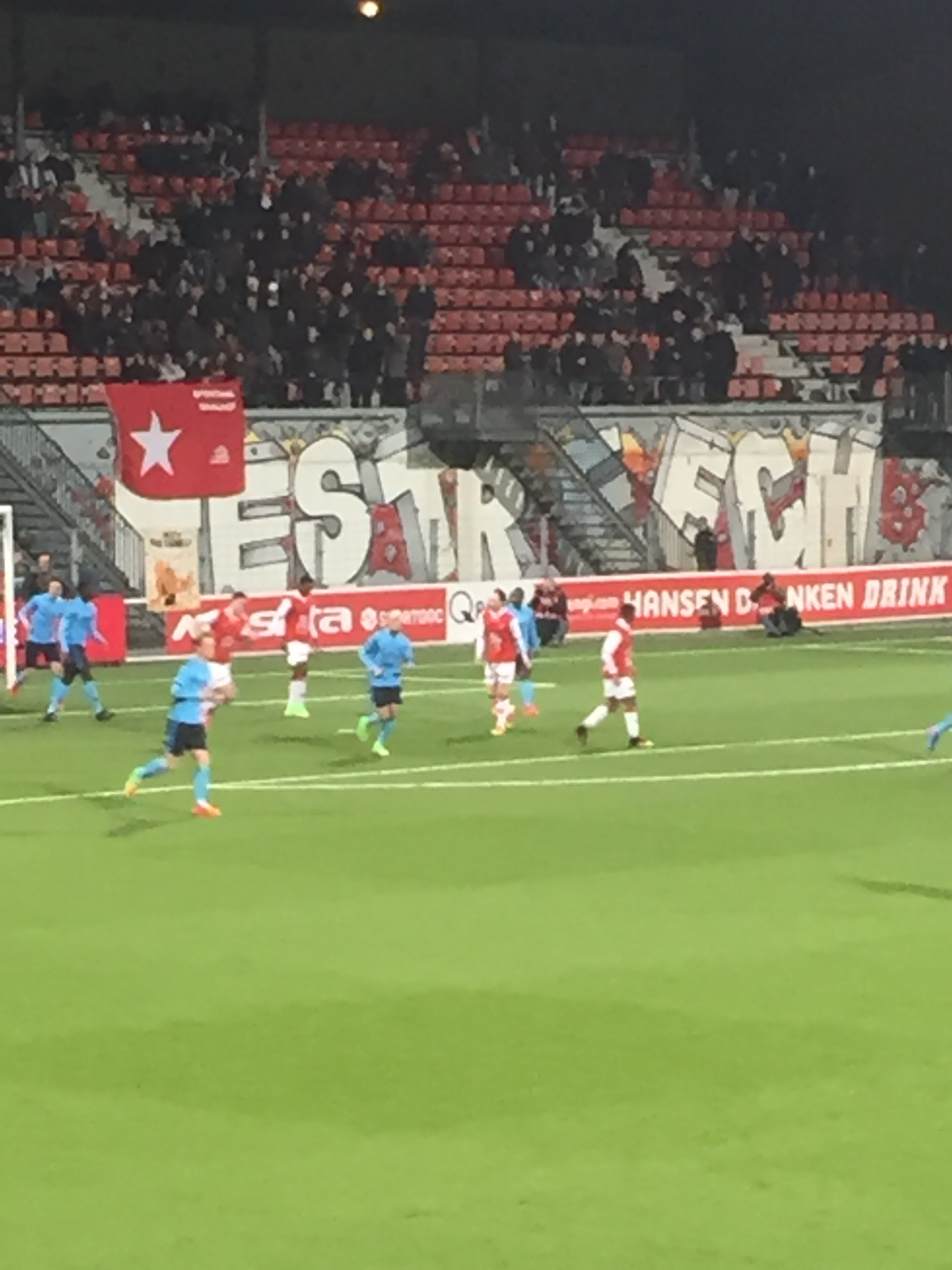 Mestreech is a Dutch dialect spoken in Maastricht, or what residents of Maastricht might call themselves 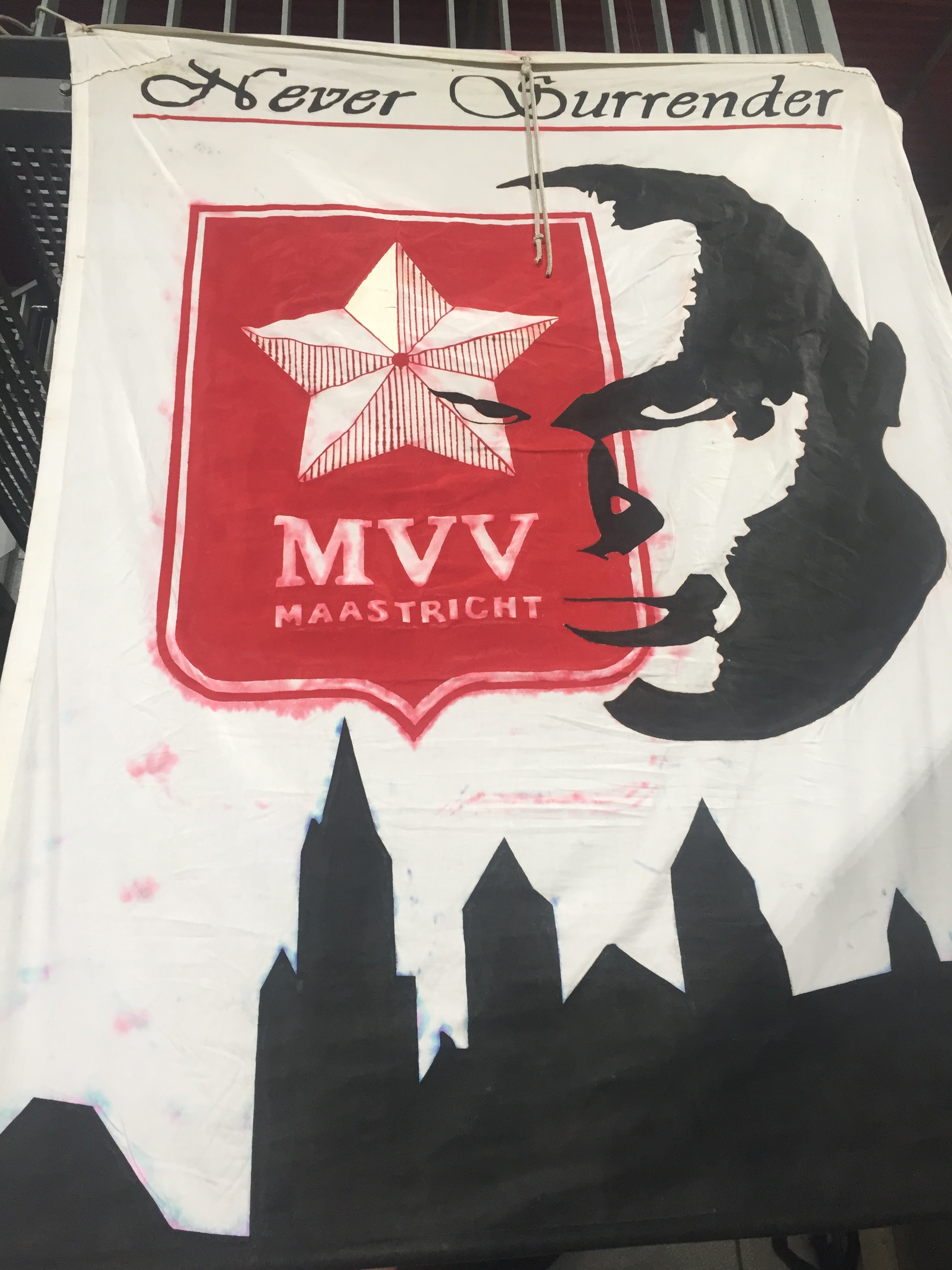 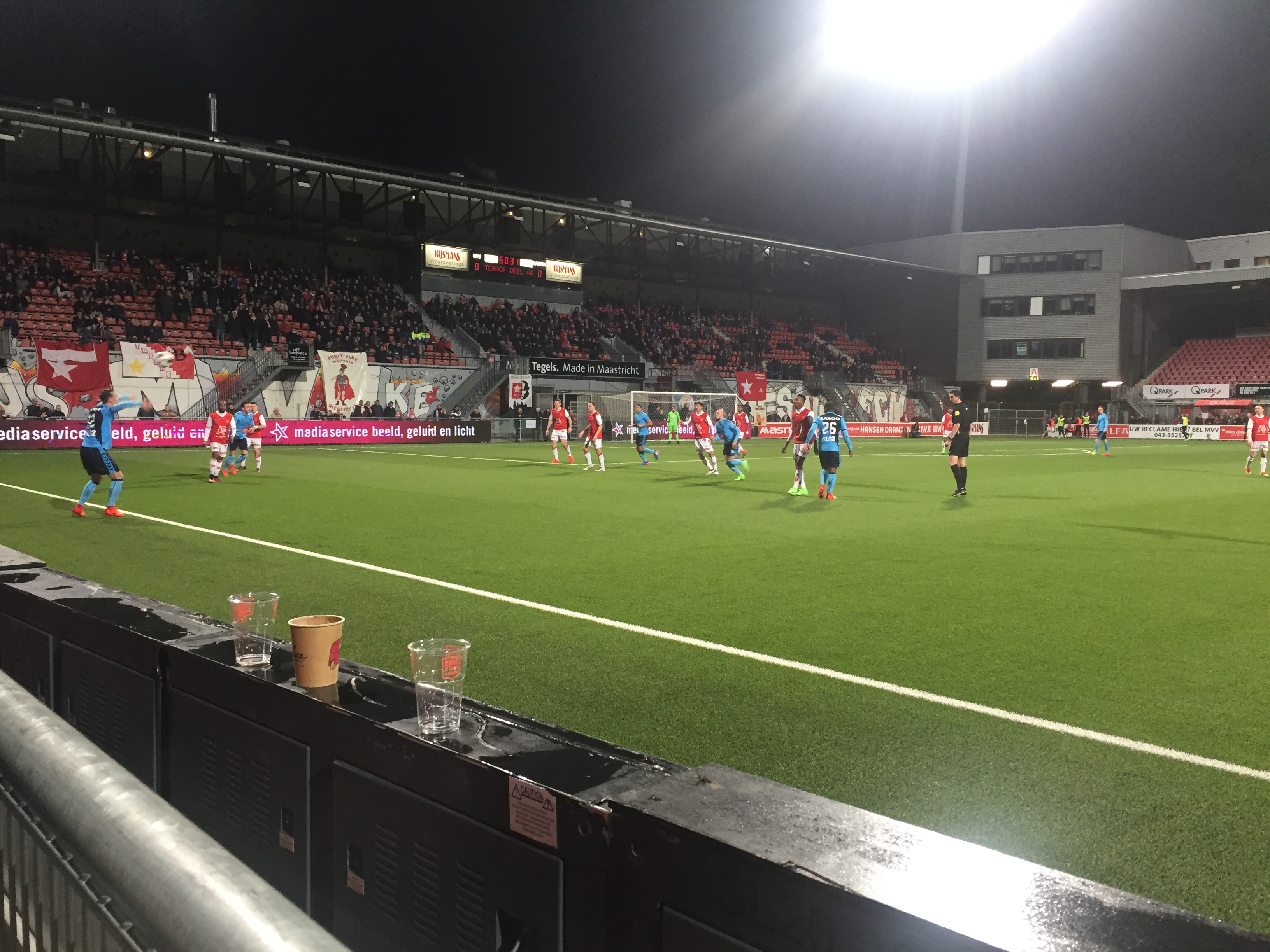 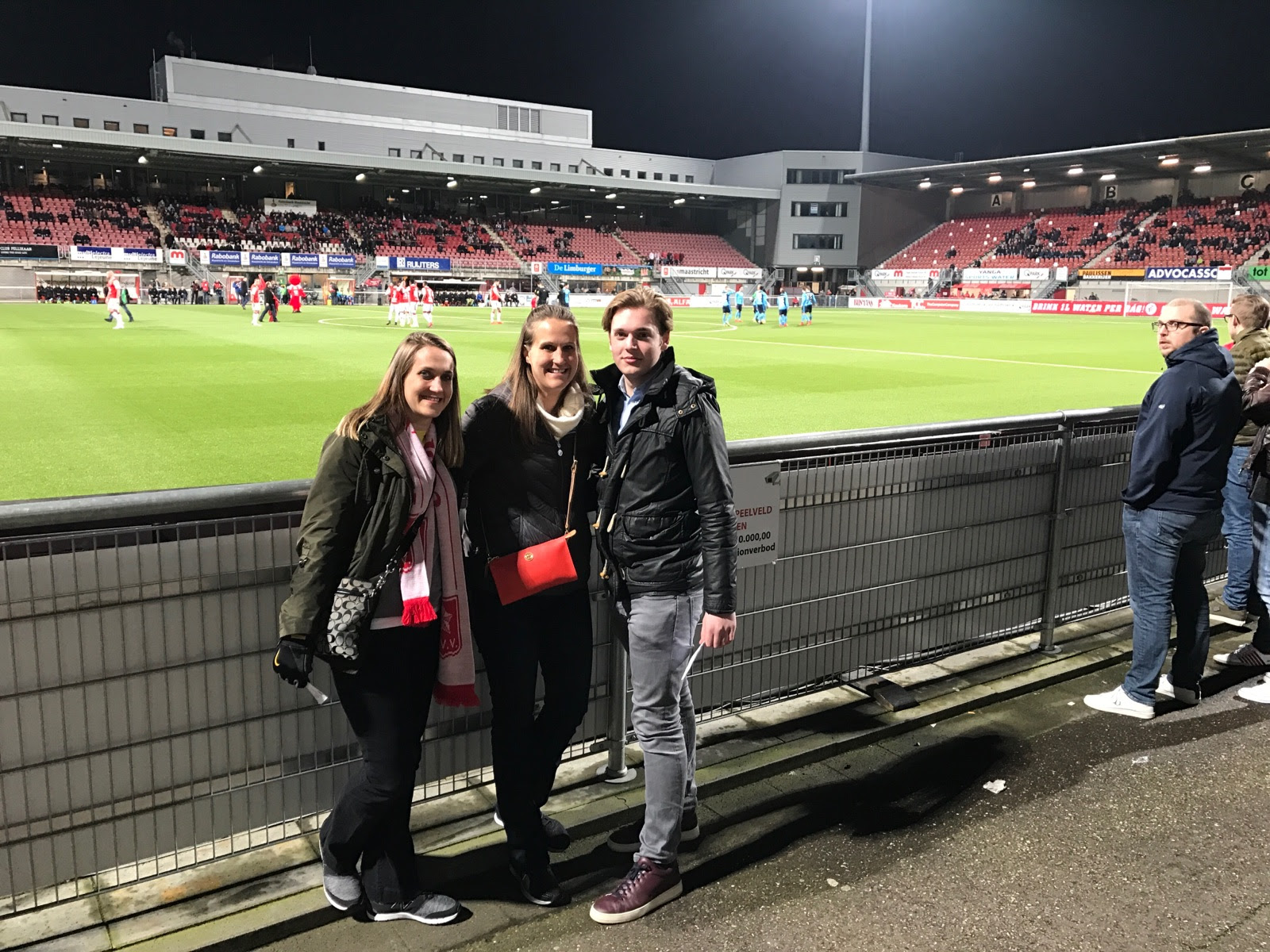 Thankfully MVV scored a lot of goals so there were plenty of chances for us to pretend to sing along to the celebration song!