On Sunday, we had breakfast at our Hilton hotel in Cologne. Luckily my sister's reward status got us free breakfast, because I'm pretty sure it would've cost an arm and a leg. It was very elaborate and had a million options. After that, we hooked up with Kim and Fabian and did some walking around the city. We passed by the Cathedral again and then walked along the Rhine River for a while, just enjoying the nice weather and sights. We had lunch plans already set with Kim's dad in another city, so we didn't have much time. After about an hour, we headed back to our hotel to check out. We loaded up and started the caravan to Kerpen, where Peter lives.

Peter joined us for lunch at Gasthaus Schweitzer. Meezy and I actually ate there with him and Kim nearly 7 years ago, so we thought it fitting to make a return! It has a biergarten and is known for its ridiculous portion sizes. As expected, the guys all got big beers and crazy meat dishes. 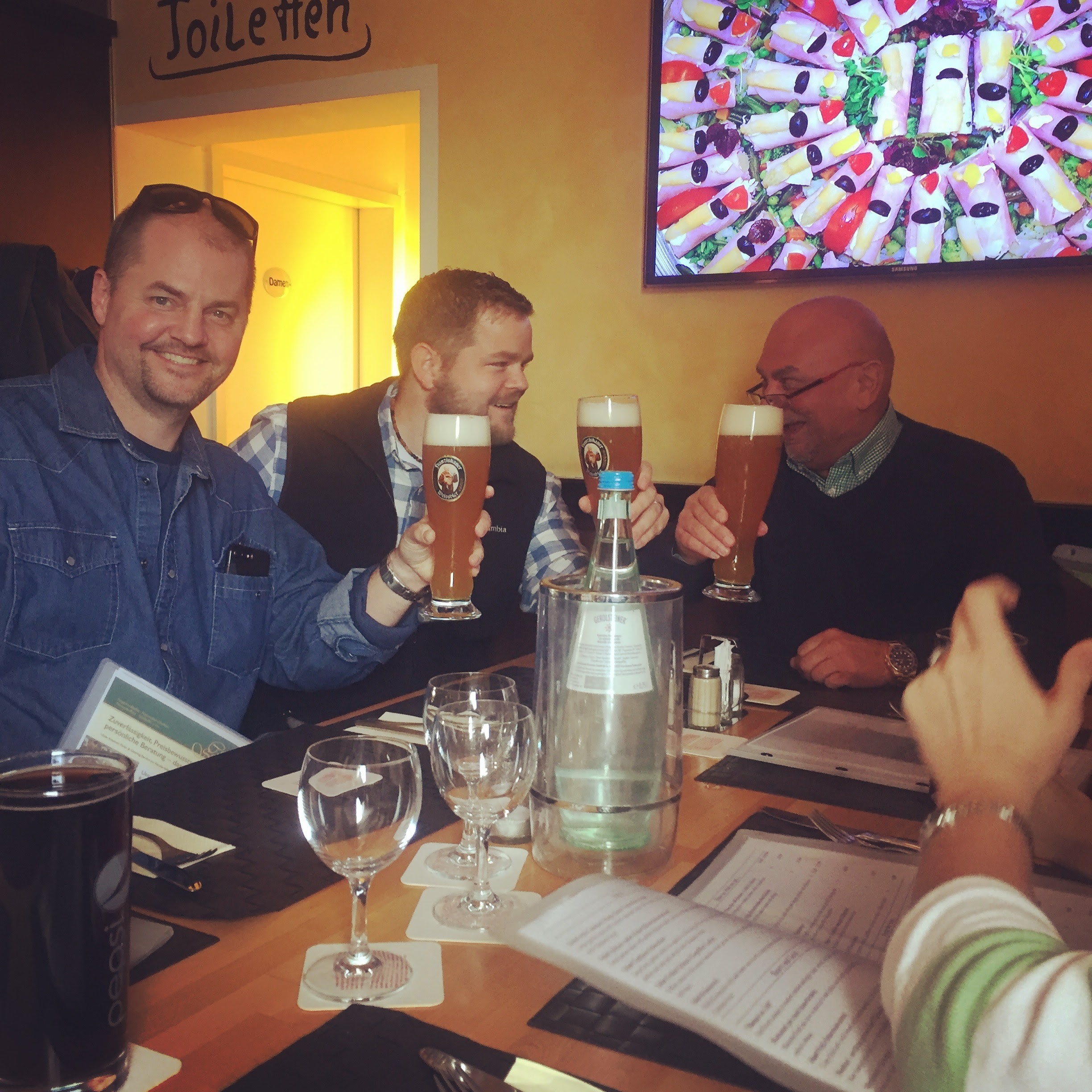 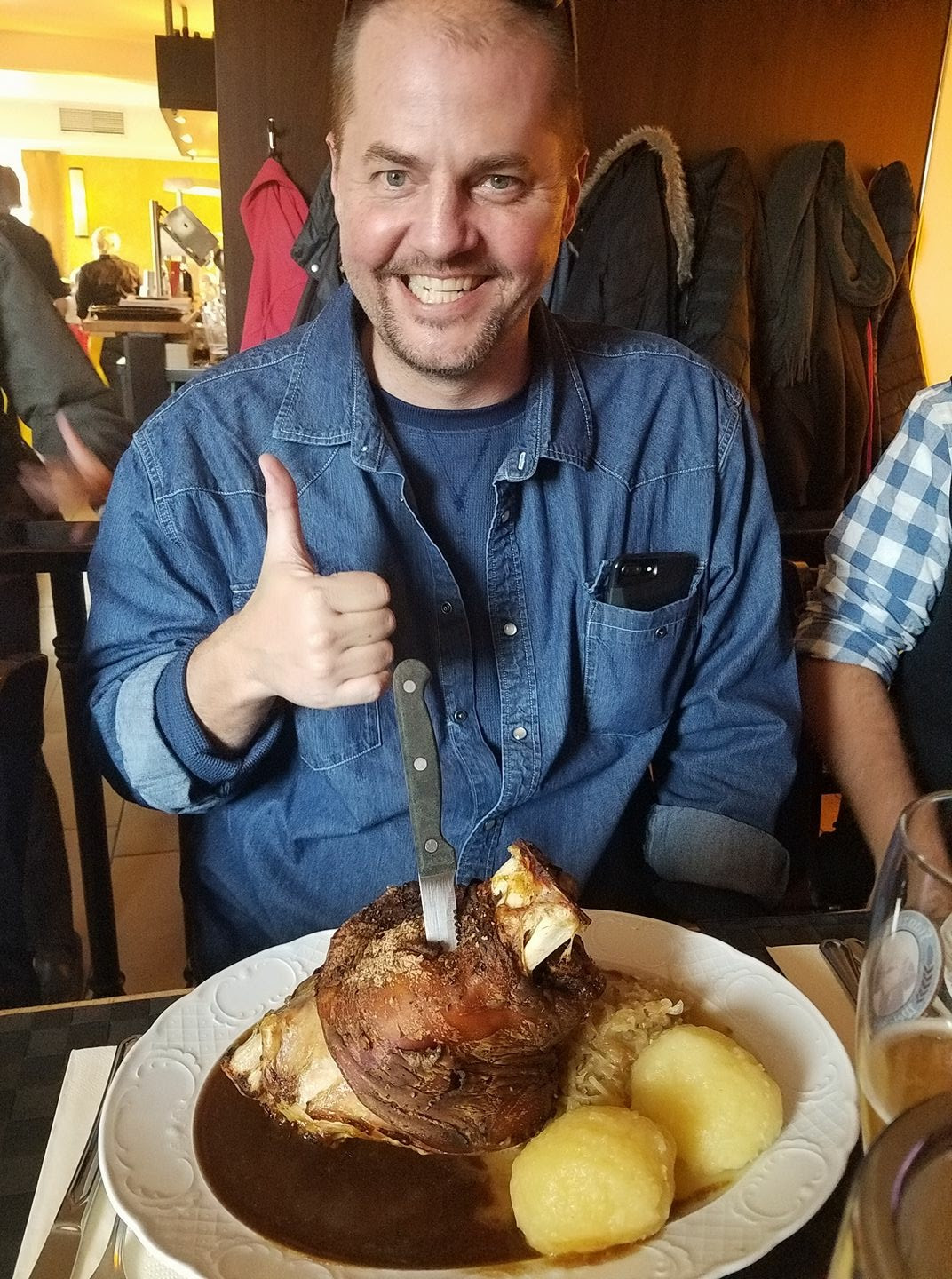 It was so nice to catch up with Peter and introduce him to my sister and her husband. I asked him when he'd visit us in America, but he said the flight was too long! Guess I'll just have to come back to Germany to see him again. After lunch, we decided to visit Dusseldorf since this was our last day with Kim and Fabian and we didn't want to leave them yet! It was about an hour drive, but we didn't care. Once there, we found a parking garage near the city center. They are not made for big sedans!! The spaces are so small and every turn inside the garage will make you feel claustrophobic. Our car had sensors around the entire perimeter and any time an object came close to it, it would beep. Driving through a parking garage is hilarious because the car beeps like crazy.

We walked along the Rhine River in Dusseldorf and enjoyed seeing all the people in the park sunning, playing, making out, and eating gelato. It was a lovely day and everyone seemed so carefree. We watched some barges go by and just tried to soak up every minute. As it got later, we had to say our goodbyes to Kim and Fabian because we had a 2 hour drive ahead of us to get to Maastricht. We were sad to go, but also knew we had amazing adventures still to come.

In Maastricht, we stayed at Hotel St. Martenslane. It's a small, funky hotel, but the accommodations were great and the reception area and front desk staff are top notch. Who doesn't love a vending machine in the lobby that offers beer? The only downside to this hotel was the parking. The first option they gave me was something that seemed like a storage unit. While the rest of my group was bringing luggage to the rooms, I tried to park the car. There were only a couple spaces available and they were pretty much meant for tiny egg cars. I pulled into one, but then someone tried to drive behind my car and there wasn't even room for them to do that. Guess my car was too big. I backed out, exited the garage, and drove around to reception again. I told them the issue and they offered another parking garage option. That one at least had full size spaces, but the maneuvering to get into them was comical. Once you entered the garage, you quickly came to a dead end, so if you hadn't grabbed a spot immediately, you got to do an Austin Powers-worthy 18 point turn. I was just glad no one else was around to see it. 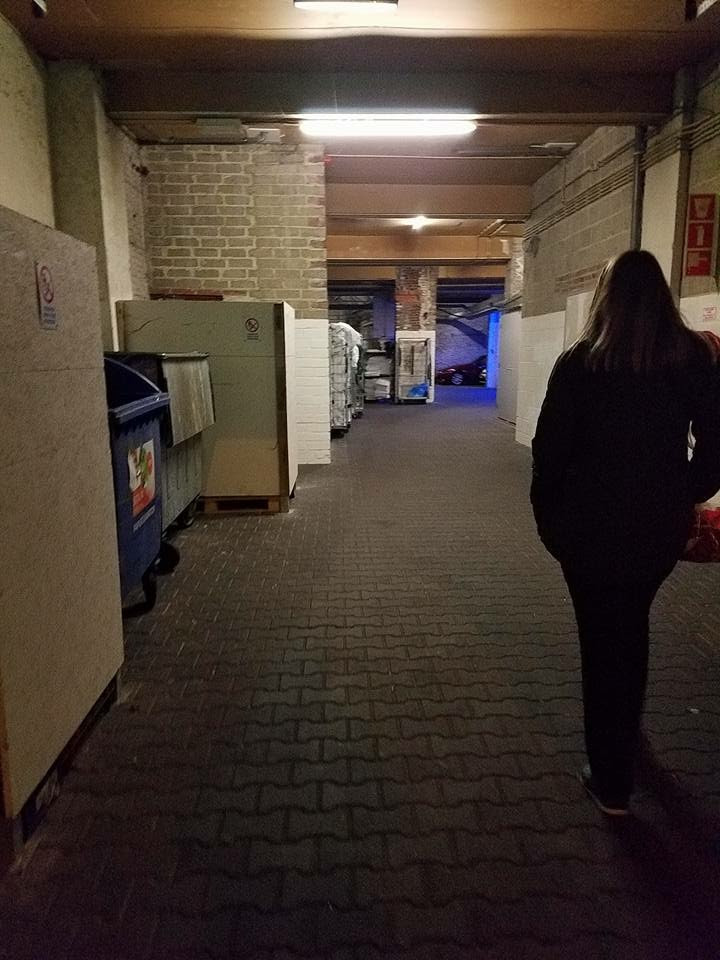 What they call a "parking garage"

By this point, we were all pretty hungry, so we walked over to De Gouvernuer, a bar and cafe my sister had visited on her last trip to Europe. They had surprisingly good food, so I was happy. A relative of mine, Patrick, met us there. I actually had never met him before, but his father found our family on Facebook a couple years prior, thanks to our unique last name. We determined that we were indeed related and could actually trace back where our family trees met. My sister had met him for the first time last year, so now it was my turn! Pretty crazy, but also awesome. He brought along some homemade licorice-flavored alcohol that he called "Dropshot." It's not licorice like we think of it, it's made from licorice root candy, which is like a mix of salty and licorice. Nonetheless, I let the rest of my group handle the taste-testing on that. 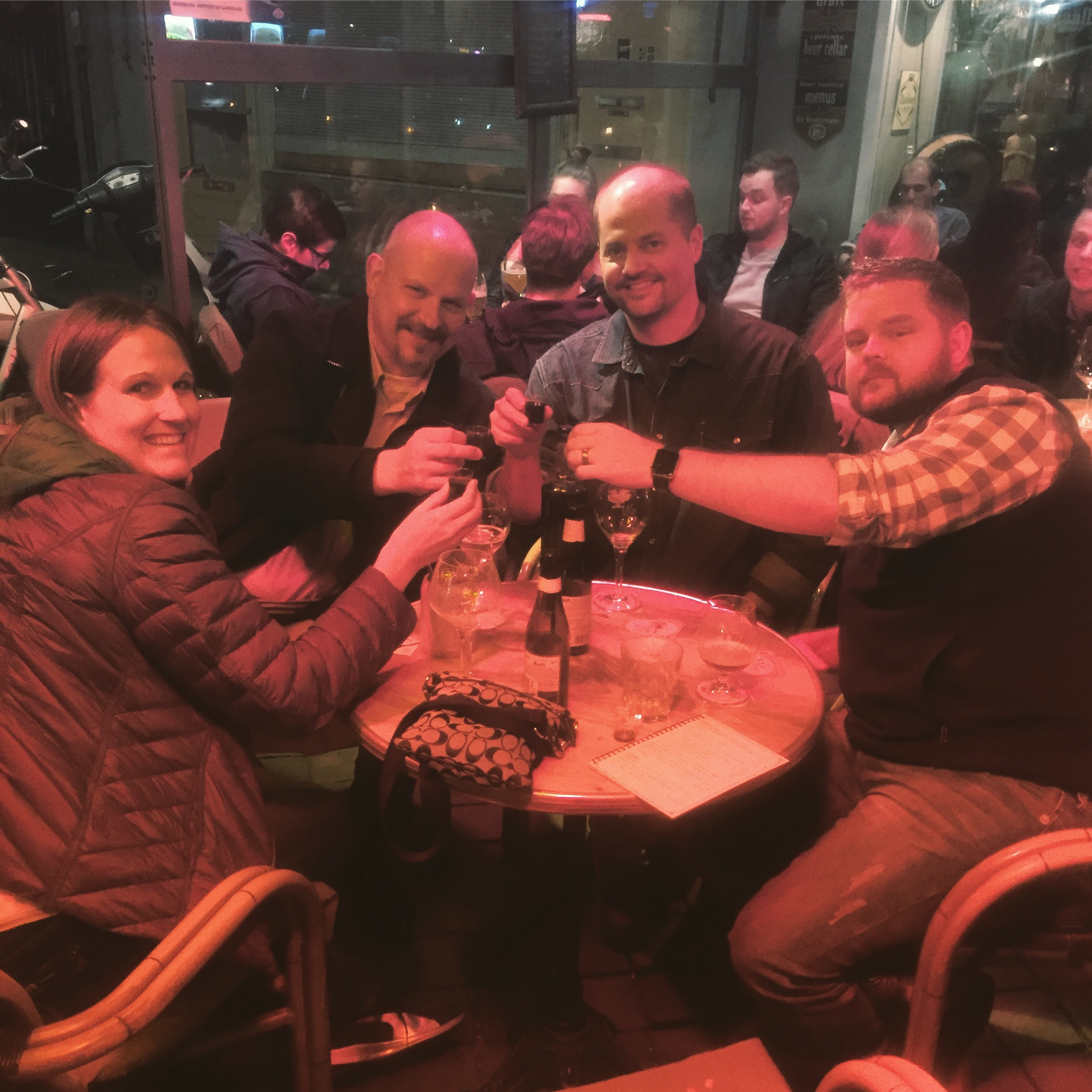 After our late dinner, we retired to our hotel. I felt like we had already done enough to call this a successful trip, but luckily we had even more fun things on tap. Sleep didn't seem to be one of them, though!!
Posted by vanweezy at 6:10 PM