We arrived in Frankfurt around 10am and picked up our rental car. It was a really nice Volvo S90. Since there were 4 of us and we all had bags, we knew we'd need a large sedan. It didn't take long to see how out of place we were, though! (Small cars are definitely the norm). We drove 20 minutes to our hotel - Premier Inn Frankfurt Messe, where we'd be meeting our friends, Kim and Fabian. They live in Cologne, but had taken the day off work so they could explore the city with us. They would stay the night in Frankfurt too, and then we'd caravan the next day toward Cologne.

The Premier Inn had rave reviews online and was very affordably priced - 59Euro for the night, and 10Euro more per person for breakfast. Almost sounded too good to be true! It didn't disappoint, though. Parking, reception, lounge area, rooms, etc, were all immaculate. Even though it was only about 11am when we got there, they let us check in because our rooms were ready. We freshened up and eagerly awaited our friends' arrival.

When Kim and Fabian arrived, we headed out on foot to check out Frankfurt. Our first stop was the Eiserner Steg - a footbridge over the Main River. It has a quote atop it from Homer's Odyssey. It's also a love lock bridge - meaning couples attach locks to it and throw the key into the river, symbolizing their unbreakable love. 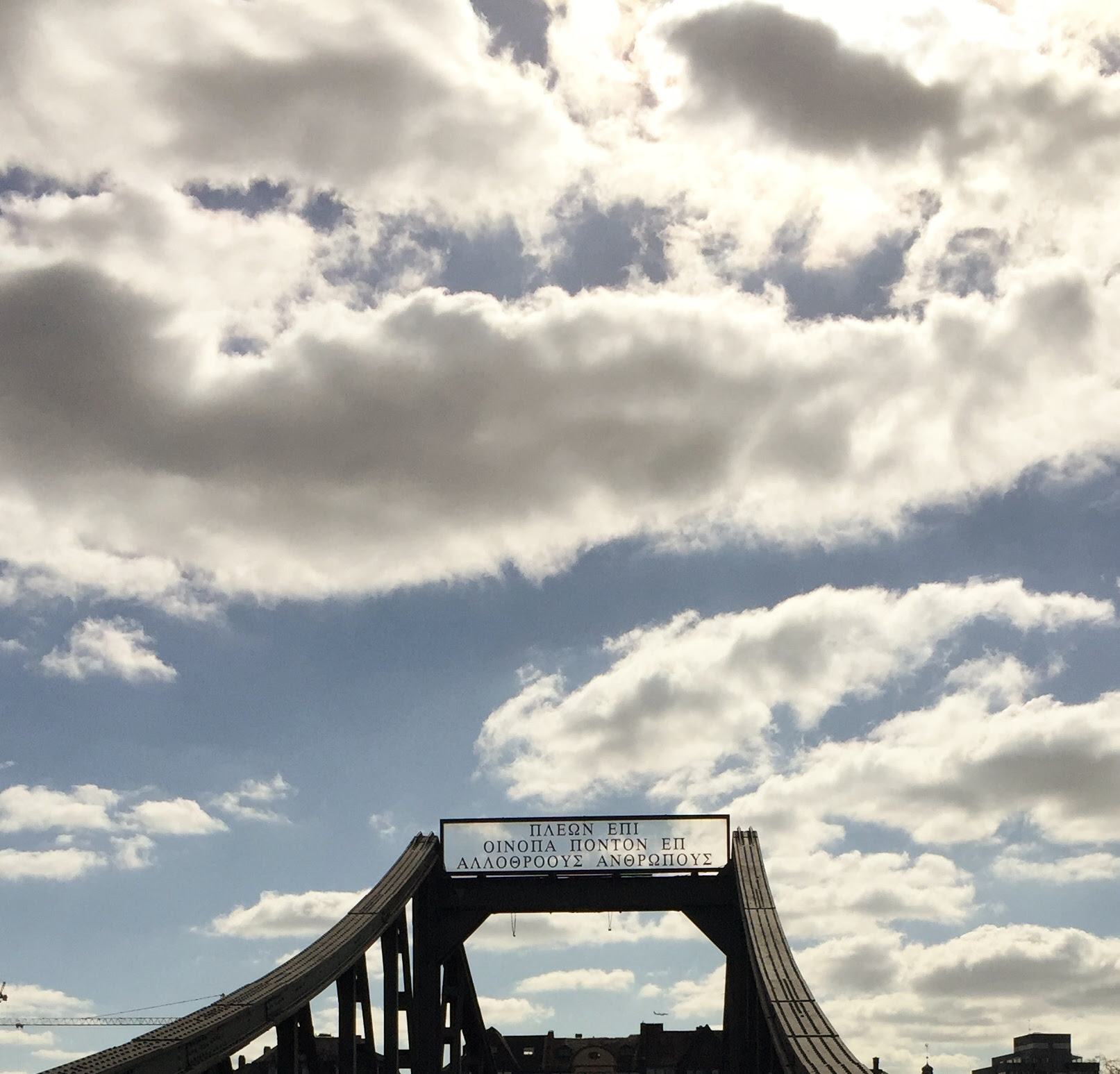 Translation: "while sailing over the wine-dark sea to men of strange speech" 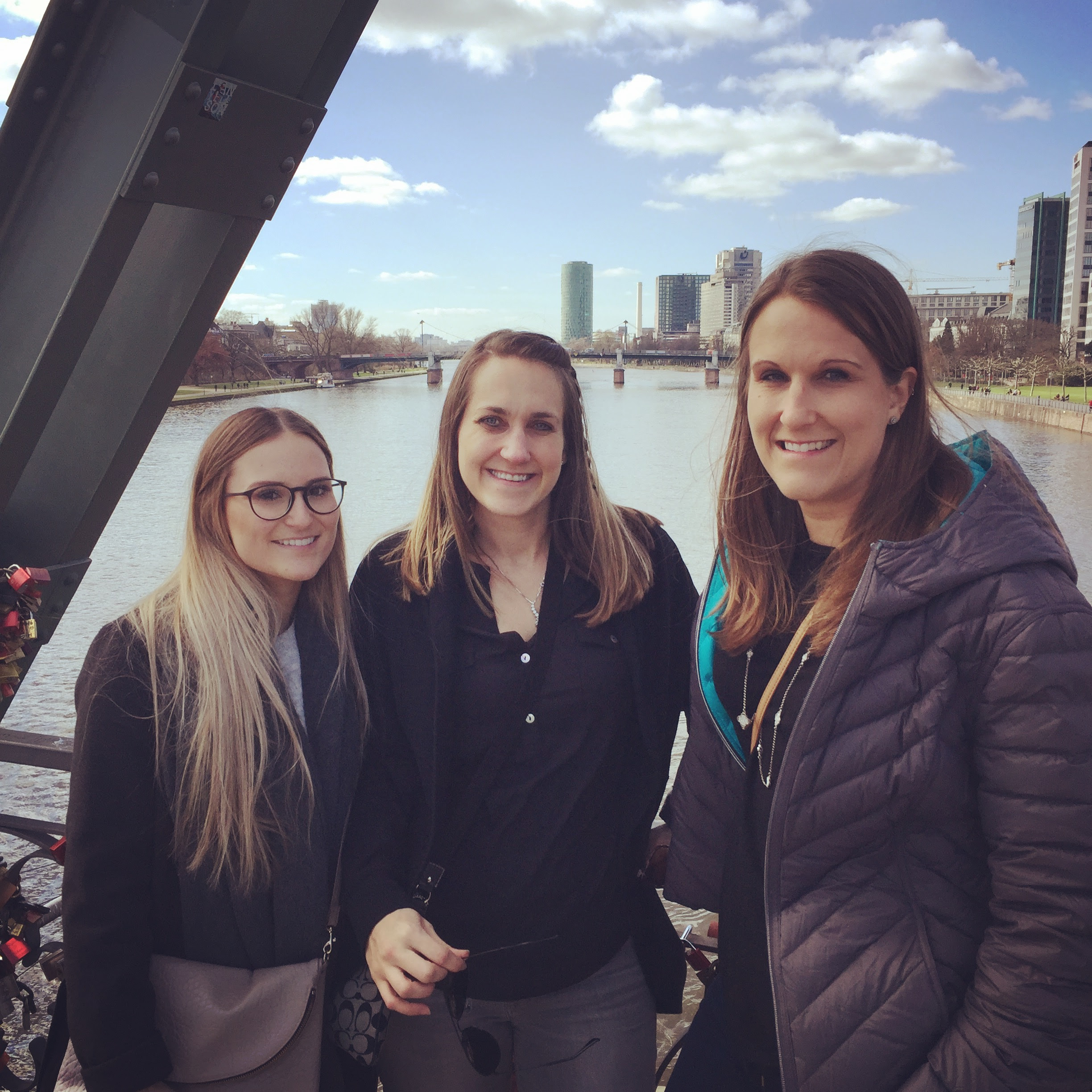 Kim, me, my sister

By this point, we were hungry for lunch, so we found a restaurant called Dauth Schneider. Their sign said they were famous for their apple wine, so you know the guys had to try it. We all found dishes that appealed to us and the food was wonderful, but the "best" part of the meal was a sampler dish we got that included some "Handkas mit Musik." I don't remember the names of the other items on there, but I do recall the eggs covered in some sort of green sauce were delicious. But, back to the main attraction - the "Handkas mit Musik." That is the bottom right item shown below. It is a cheese with a pungent aroma, covered in onions. Meezy and my sister tried it and they said it was fairly awful. Haha. It tasted rotten and gave them terrible breath. We asked the waitress why it was called hand cheese with music and she said, "the music comes later." We died laughing. Basically, this dish was going to give them gas. 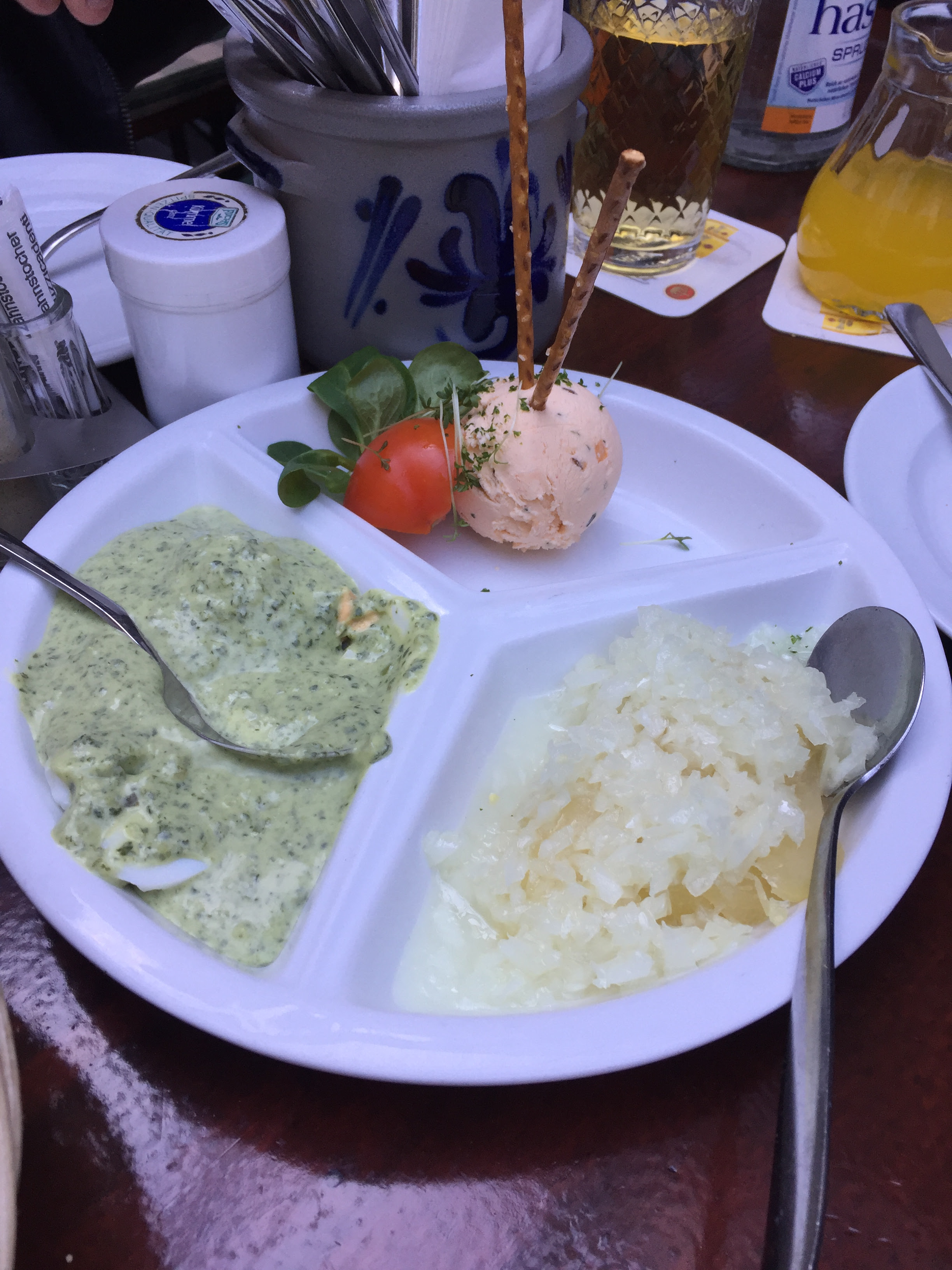 After lunch, we did some more walking and checking out the sights. Meezy saw a store selling whiskey and we decided to stop in to see if it carried a Japanese whiskey he's had a hard time finding in the US. Sure enough, it did! We also had the chance to admire the architecture in Frankfurt, see a lot of old buildings, and grab a photo op with some "modern" art. 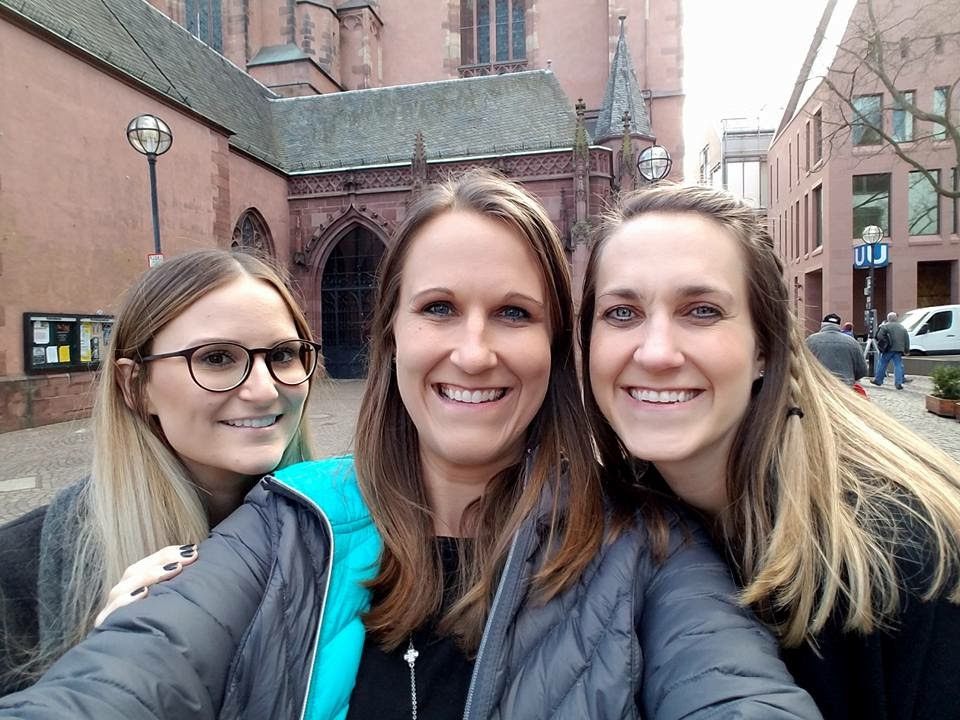 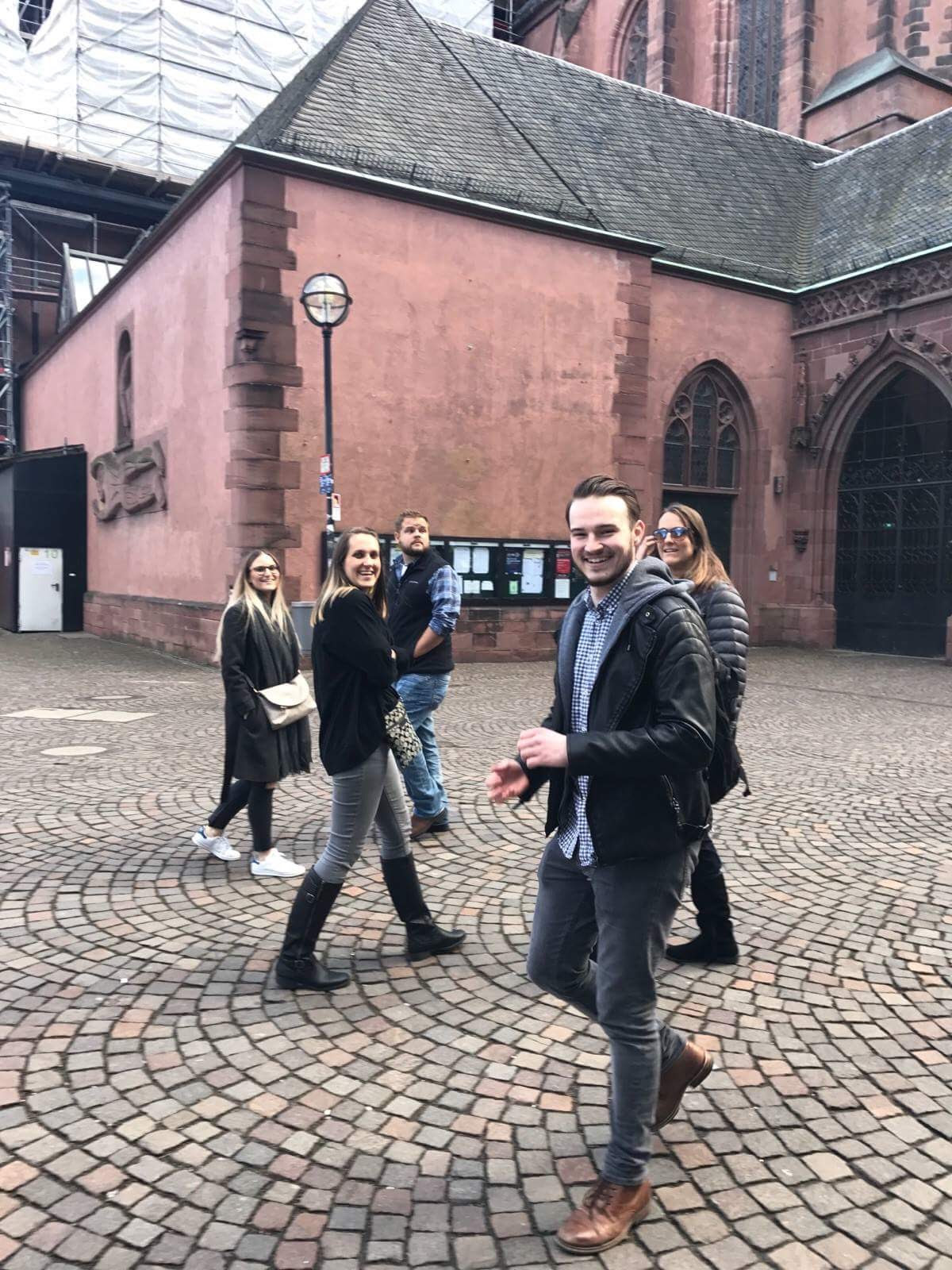 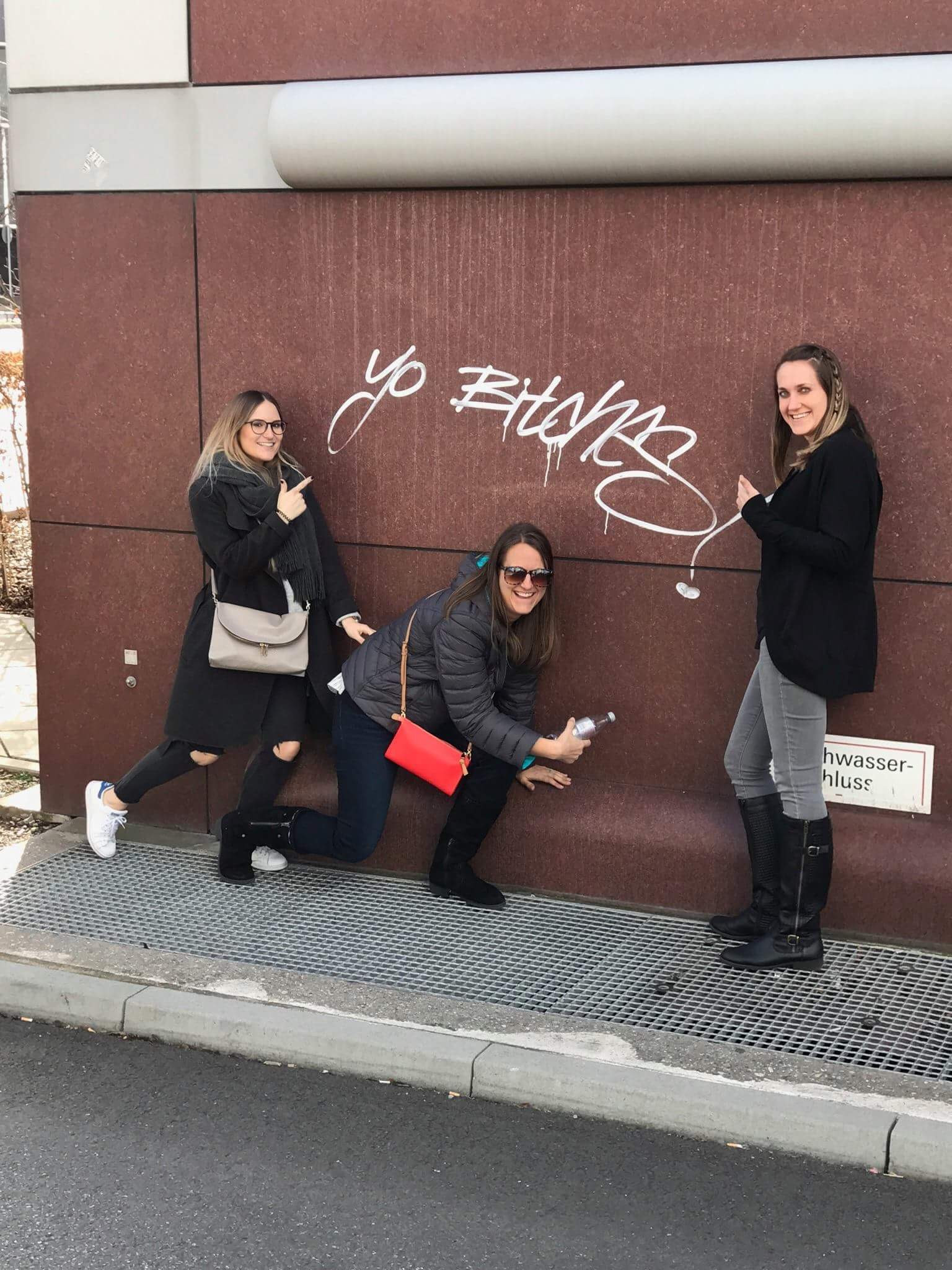 By this point, the jet lag was catching up to us, so we decided to head back to the hotel and lay down for a couple hours. After getting a quick nap in, we walked to the nearby Skyline Plaza to check out the shops and pick a dinner place. The coolest part of the shopping center was the Skyline Garden on the roof. We climbed up to the Observation Deck and enjoyed amazing 360 degree views of the city. Observation Deck, or as I like to call it "Aaaa shitz platform"

After dinner, we walked around the mall a little bit and stumbled upon a place that looked like it could serve us some delicious dessert - Bunt Waffel & Crepes. It did not disappoint! We selected some delicious sauces and candy bar toppings for our waffles. 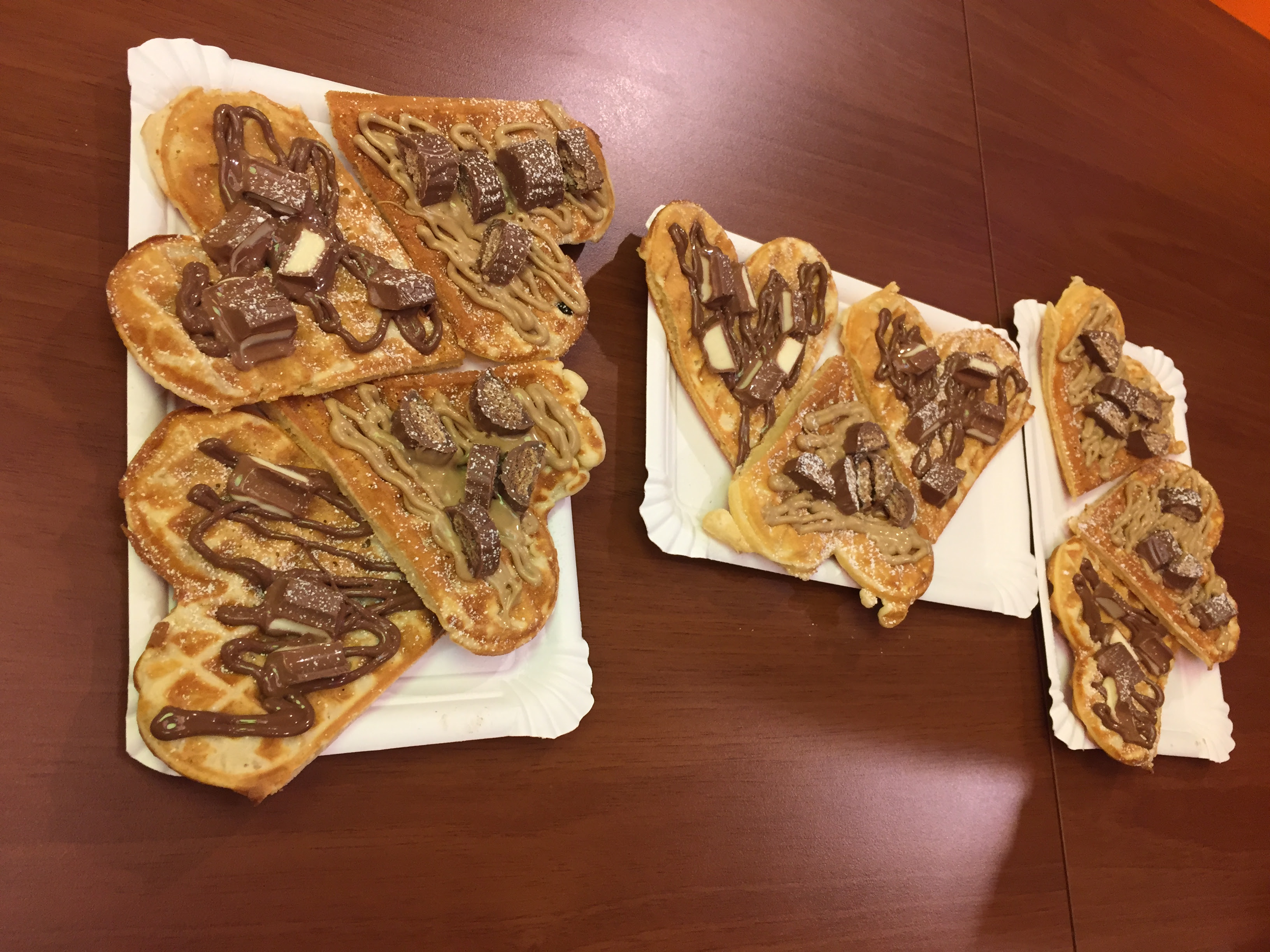 After that, we walked back to the hotel, grabbed drinks at the bar, and played some Dutch Blitz. It was so nice to spend time with Kim and Fabian, but we didn't want to stay up too late because we knew we had a ton more adventures in store!
Posted by vanweezy at 4:27 PM