I took Riley in to the vet today to get weighed, and I was worried about what the results might be!  We had a little eating snafu over the Thanksgiving holiday, and I wasn't expecting any success on the scale for him.  We brought him to my mother-in-law's house for a few days, and we forgot that there was a bag of dog food in the shed within his reach.  Before we realized what was going on, he had eaten half the bag!  Ugh.  I thought for sure that would have counteracted any progress we made over the past couple of months, but apparently it didn't!  His weight today was 40.5lbs, which is 2.5lbs lighter than he was in August.  Great job, Bubba!  We're almost at the 20lb weight loss mark, and we probably only have about 5 more pounds to go!  There has definitely been improvement in his energy since we started him on this weight loss journey.  He will play fetch with us for much longer than he used to.  Another nice benefit from him being skinnier is (pardon the TMI) his ability to now reach certain body parts that he wasn't able to previously.  This makes for a cleaner Riley!  I recently put an old Halloween shirt on him that at first fit just fine, then went to being super tight, then went to being too small for me to even put it on him, but is now back to fitting again!  I love my sweet little Riley Roo. 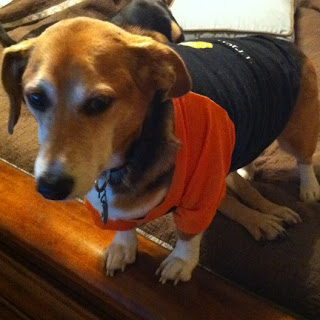