The Price is Right Experience

A few weeks ago I received an email from thebump.com saying they had partnered with The Price is Right to do a maternity-themed episode.  We could click a link to see if there were any free tickets available, so out of curiosity, I did.  It turns out they did have tickets left!  Hmmm.  Now I was in a predicament.  I've been a fan of The Price is Right since I was a little kid, and I always thought it would be really neat to attend a taping in person.  But, the show tapes in Hollywood, so it would require us to fly out there and get a hotel for a night.  I mentioned it to Meezy, and to my surprise, he immediately agreed that we should go!  (What an awesome hubby!)  I found some affordable flights on Virgin America and then used some Discover cashback money to pay for our hotel.  We flew out this past Monday night, to attend the Tuesday morning taping.  I'd done a lot of research ahead of time to learn about any tips or tricks that we should know.  The show gives out more tickets than there are seats in the studio, so it's possible that you won't make it in even if you have a ticket.  As such, lots of people recommended getting there earlier than the 8:30am call time to stand in line.  I'd also read that people suggested bringing snacks and magazines to help pass the time since there would be lots of waiting before the taping started.

We got to the studio about 6:30am, and there were already about 40-45 people in line in front of us (the studio holds 300 people).  By the time 7:30am rolled around, the line stretched out pretty far behind us.  I never got to see how long it actually got, or if everyone made it in, but I think getting there early was a good plan!  We read magazines and talked to the people around us to pass the time.  As it got closer to 8am, studio employees started going through the line and checking tickets.  If your ticket showed that you had clicked the link from thebump.com, you got moved over to a priority line.  We then became numbers 17 and 18 in line.  After they let us into the main gate, we were moved into an area where we had to fill out an information card and we got our picture taken.  This is where they weeded out the non-expectant mothers from the contestant pool by putting a large X over their number.  (Only women that were expecting were going to be called as contestants).  This made us get a little hope that my chances of being called were actually pretty good!  We waited in this area for a while, and there was a gift shop and snack bar open nearby.

From here, we were moved into another staging area where we had to wait for a while.  We were always told to stay in numerical order, so Meezy and I were close to the front of each line.  When the show's producer finally came out, they called us up in front of him in groups of about 9 people.  He did a really quick interview of each of us (Where are you from?  What do you do?  When's your due date? etc), while an assistant took notes.  Apparently this is where the decision is made as to whether you're going to be a contestant.  You only have a few seconds of time to make an impression!  (A girl in our group of 9 ended up being picked as a contestant, and she actually made it to the showcase showdown.  She was with her husband, sister, and parents, and they were all wearing clever shirts related to her pregnancy.  They were also pretty high-energy!)  I think it probably helps if you come in a group and everyone is outgoing and friendly.  After the quick interview, we were moved into another staging area where an assistant gave us a briefing about the taping, and then showed us all an episode of the show that included some of the games that were going to be played that day.  (Side note: after the interview stage, before the part where you watch the episode, you have to go through a metal detector, so this is where you'd have to give up your cellphone and any other electronic devices.  You check them with security and then could pick them up afterwards.  They could help you pass the time in the morning, but we opted to leave them at the hotel so we didn't have to get them checked.  We didn't want to stand in the long line to pick them up after the taping, when we knew we'd be ready to go and tired of waiting by that point!)  Finally, sometime around 12:30pm, we were let into the studio.

They direct you where to sit in the studio, so it's not a free for all, but since we had been assigned such low numbers, we were seated in the front.  They had roped off the first couple of rows to put a few groups of women with clever shirts up there, and then seated us right behind them.  We were no more than 5 rows back from the stage, and just off to the right side of the contestant podiums.  In other words, we were going to be on camera a lot!  We were pretty surprised at how small the studio was.  I guess what you see on TV is a little deceiving because they use some camera tricks to make it seem bigger.  The stage was also much smaller than we expected it to be.  They use the same area over and over again, and just move the props for the games and prizes in between each break.  The show isn't live, but they try to tape it like it is.  In other words, there's not many do-overs, and it doesn't take much more than an hour to tape.  They take "commercial breaks" and during those times, Drew Carey and the announcer spend time talking with the audience, making jokes, or telling stories.  It was pretty entertaining, and a little weird that he was literally right in front of us!

Meezy and I caught ourselves looking at the monitors a few times, trying to see what the shot would look like on TV, and if we were in the camera shot.  One time, I saw myself on the monitor, looking up at the monitor.  Oops!  We tried to stop doing that as the show went on, so I'm not sure exactly how many times we're on camera, but I'm guessing it was a lot!  One of the crew was responsible for prompting the audience on when to clap, cheer, or yell out potential prices, and he was usually pretty close to us, so we started yelling out whatever popped into our head.  I'm pretty sure we were no help to the contestants, but we wanted to contribute like he was asking everyone to do!  I'm curious to see if I'm ever on camera holding up a ridiculous price.  Lol.

When it was all said and done, I didn't get called as a contestant, but the taping was a blast.  It was so neat to see people getting called down that you had talked to in line previously, or just simply seen during the waiting process.  It made it more personal and we actually wanted people to win and felt genuinely happy for them when they did.  After the show was over, they did have to re-tape one person's "come on down" because the cameras missed it the first time.  It was kind of hilarious because she had to recreate her excitement and the rest of the audience had to as well.  The announcer also had to do a couple of prize descriptions again because his original ones weren't going to fit into the allotted time.  After those were done, every audience member was given a gift bag from thebump.com with a few baby-related items and some gift cards in it.  That was a nice gesture!  We finally got out of there at almost 2pm, which means the whole process took us almost 7.5 hours!  There were times where we got bored and a little annoyed, but it really wasn't that bad.  I'm glad we went, and I'd say it's a once-in-a-lifetime experience.  We probably won't be doing it again, but I wouldn't discourage other people from going.  The taping we attended will run on January 11, 2012.  I'll be setting my DVR for sure! 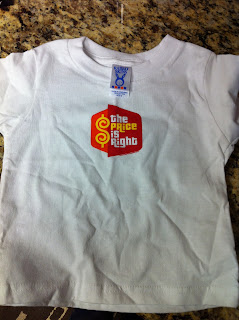 A little shirt for Dutch since he's the reason we went! 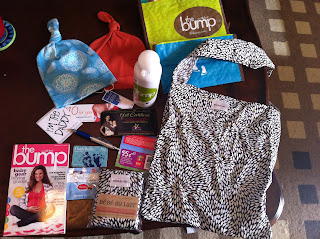 Gift bag contents from thebump.com
Posted by vanweezy at 3:36 PM