On Saturday, I headed down to DeSoto to pick up my birthday present from my Mom.  She tiled the top of a table that my grandparents used to have in their house, and included some of my Opa's hand-painted tiles in the design.  What a beautiful gift!  I love when things are passed down from generation to generation.  Every time I see this table, I'll think of my Opa. 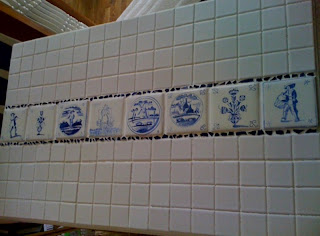 After that, I headed to the rehab center to visit my Oma.  I didn't tell her I was coming, so it was awesome to see the surprised look on her face when I entered the room.  She seemed pretty lonely, and I was more than happy to give her some company for a while.  It was a beautiful day, so I wheeled her outside to the courtyard.  We chatted for a couple of hours, and her state of mind was so much better than the last time we had talked.  It's neat to spend time with her one-on-one, because sometimes our conversations just go in the most unlikely directions.  One thing leads to another and she's telling me about the time, as a teenager, she was on her bike and was hit by a car.  The first doctor she went to told her her leg probably wasn't broken and she could walk tomorrow.  She tells me, "If I can walk tomorrow, then I can walk today."  She's hilarious.  Tough as nails, for sure.  (It turns out her leg was broken, and she ended up needing a cast from thigh to ankle!)  My Dad showed up to visit also, so the three of us sat and talked for a while.  Three generations of vWs, just shootin' the shit.  It was a nice scene.


2008
On Sunday, eleven of us went to the Frisco Rough Riders game for Mother's Day.  I had never been to a minor league game before, and I've been missing out!  They are really fun because you're close to the action and they try to get the fans involved as much as possible.  (Did I mention we sat in the section where the tickets include free all-you-can-eat hot dogs, hamburgers, chicken sandwiches, popcorn, and soda? Hellz yes!)  My mom even scored a foul ball!  She gave it to my nephew, Joseph, who managed to get one of the players to sign it after the game.  Very cool!  It was so nice for my sisters and I and our families to be able to spend the day with my parents.  I know how lucky I am to have such a wonderful family, and I welcome every reminder! 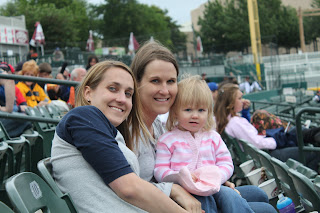 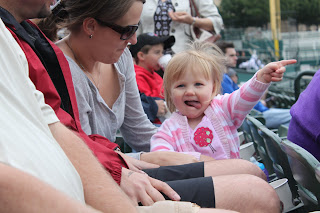 Livy pointing to the mascot. 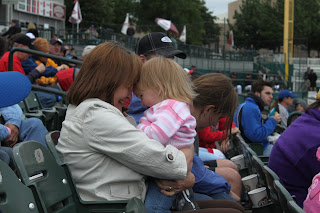 Livy and her Oma 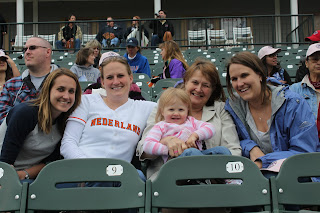 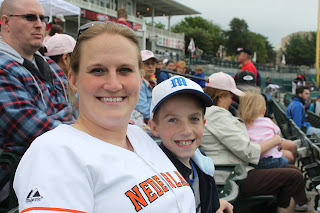 My sister, Jill, and her son, Michael 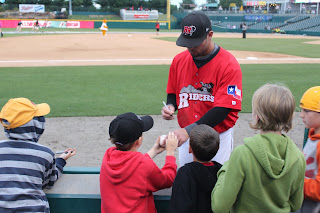 Jill's son, Joseph, getting an autograph
Posted by vanweezy at 9:22 PM