As I write these posts, I'm realizing that 2022 was a big year of vacations for me! I love traveling and making memories, so I hope this trend continues in the future, if my work schedule allows. Our favorite Germans, Kim and Fabi, were in California recently while Fabi completes a fellowship at Stanford, and there was no way we were going to miss the chance to see them while they were in the US. It just so happens that the 49ers are Meezy's favorite team, and the stadium is in Santa Clara, not far from Stanford. Why not kill two birds with one stone?

We arrived on a Friday and checked into the Hyatt Regency Santa Clara. It's ideal for getting to Levi's Stadium by foot on game day, so we figured we'd stay there for the whole weekend. First order of business was checking out the adorable Airbnb they're staying in. It's a guest house in a beautiful neighborhood in Menlo Park. The redwoods in the backyard are breathtaking! (And forgive me for being shocked at seeing black squirrels running around. I'm not used to anything other than gray or brown ones!). 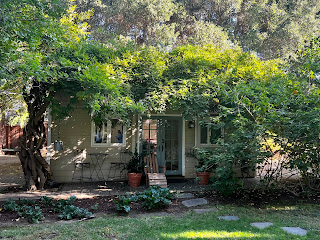 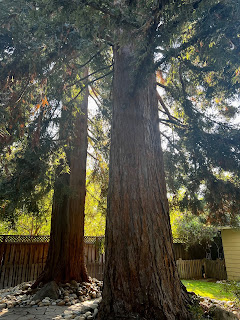 We headed to Stanford to check out the campus and it's a good thing I was wearing walking shoes - the campus is huge! I loved seeing the palm trees lining the street leading to the main entrance. 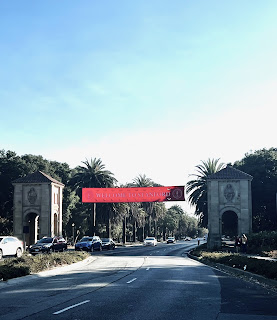 We ate at Pacific Catch in the Stanford Shopping Center and ended up spending a couple hours there catching up and sharing funny stories from our recent trip to Oktoberfest. Afterward, we walked back to Menlo Park to discuss our plans for the next day and then called it a night. My watch tracked more than 9 miles covered on foot that day!
The next morning we met back at their Airbnb and then walked to the Menlo Park train station together. Our plan was to take the Caltrain into San Francisco, but a few minutes before our train was supposed to arrive at the station, we got word that it was cancelled. The next one wouldn't be coming for an hour, so we opted for an Uber instead. Once we arrived in San Fran, we started sight-seeing. First stop was Oracle Park and we walked north along the shore, checking out all the piers. We saw the Bay Bridge, the Ferry Building, the famous seals at Pier 39, and the SS Jeremiah O'Brien. We ate lunch at Pier 23 Cafe. 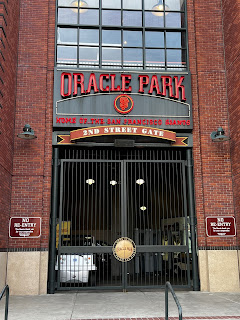 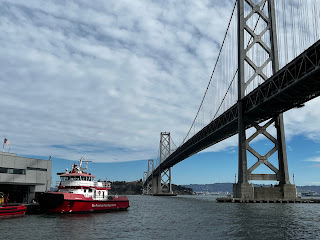 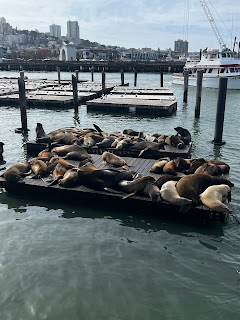 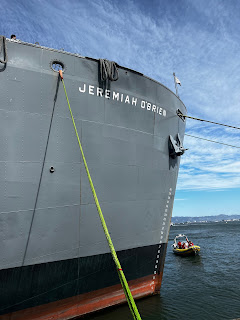 After lunch we headed away from the piers, toward the interior of the city. First stop was Coit Tower, where the elevator was out of order! We didn't want to miss the 360 degree views, so we trekked up the 250 stairs to get to the top. On our way back down, right around the 7th floor, a winded-looking family asked us if it was worth it to continue the climb! We thought it was, so that's what we told them. Hope they felt the same afterward! 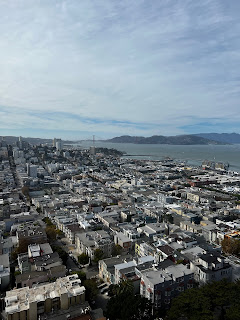 Next stop was Chinatown, where we saw Dragon Gate and a performance by some dancing dragons. 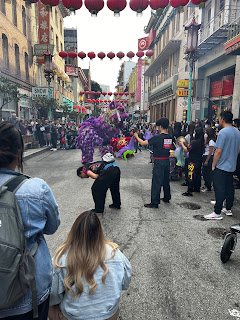 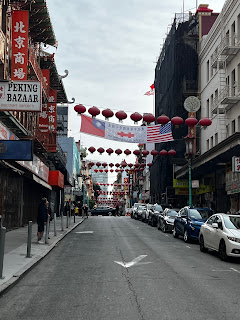 From there we hit up Ghirardelli (which was founded in San Fran) because my youngest loves their chocolate. The selection was much larger than what we're used to in Texas, so we filled a bag with goodies to bring home. Salesforce Park was nearby, which is a really cool building/transportation hub with a lush rooftop park and city views. 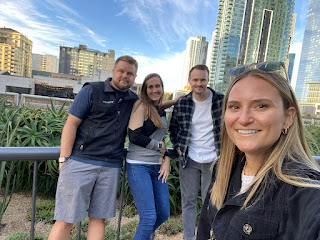 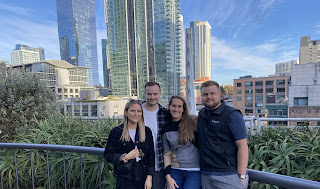 We were due to meet Fabi's parents for dinner (as they were vacationing in Cali at the time), so we headed to Vina Enoteca. Food and ambiance were great and there were plenty of options for us vegetarians. We ended this day with almost 11 miles walked!
Sunday was the day we were most looking forward to, because we had pre-game field passes and lower level tickets to watch the Chiefs and the 49ers. We headed to the stadium 2 hours before game-time, to ensure as much field time as possible! We didn't get to pick what zone we were in, so we ended up right next to where the Chiefs were warming up. Bummer for Meezy, but I was pretty happy because Mahomes is my favorite player. (Wreck 'em!). It was really cool to be that close to the players, coaches, and owners, and we even had a football bounce over to our area, where I picked it up and returned it to the team. At one point, Chiefs wide receiver Smith-Schuster knocked over the endzone pylon right in front of us and we all teased him for not knowing how to fix it. He grabbed a nearby orange safety cone to denote that he broke it and put up the "shhhh" finger and laughed. 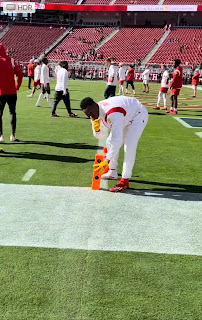 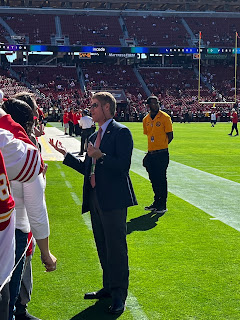 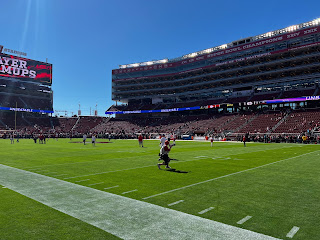 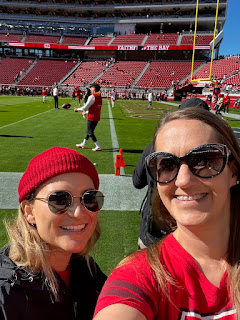 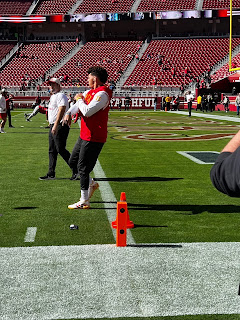 Our seats were on the lower level near the end zone. The first half was pretty exciting for Meezy because the 49ers seemed to be in control. The second half was another story, unfortunately, and the Chiefs ended up running away with it. It was still a really fun experience and we were happy to show the Germans a real American football game, close up! 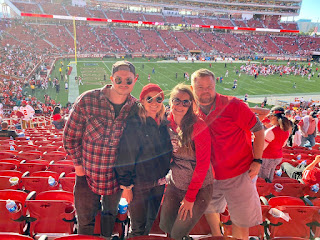 We met Fabi's parents again for dinner this night. Even though Meezy, Kim, and I are vegetarians, I thought it would be fun to bring the Germans to Fogo de Chao. The meat-lovers in the group were impressed, and of course the rest of us were happy because they have a very extensive salad bar. There's always dessert too! We visited until the restaurant essentially kicked us out due to closing time. It was hard to say goodbye! The next day it was back to Dallas for Meezy and I. We'll see you again soon, Kim and Fabi!
Posted by vanweezy at 1:00 PM