The first destination of our Europe trip this year was Dublin, Ireland. Joining us was my sister and her husband and two great friends, Scott & Kyle. We rented a car, which was an adventure in itself. Thank goodness we got an automatic, so as not to make it even harder on ourselves. Ireland drives on the left side of the road, so the driver sits on the right side of the vehicle. The lanes are so small and there are tons of walkers and bikers to look out for. Meezy and I took turns with the driving responsibilities, but everyone in the car was on "look out" duty no matter who was driving, lol. 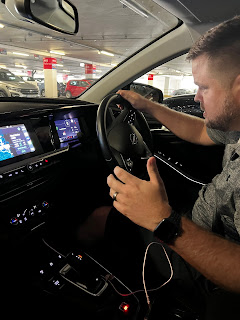 We stayed at the Royal Marine Hotel, which is situated on the coast of Dublin Bay, about 30 minutes south of the city center. The hotel was nice with good parking, shops and restaurants nearby, and beautiful views, but if I was going back, I'd choose a hotel closer to the city. It was a bit of a drag having to drive that distance before and after each day's activities.

After resting at our hotel for a little bit, we headed into Dublin for a guided tour at the Jameson Distillery. I couldn't care less about alcohol, but of course I was going to be a good sport and participate in everything. The tour was actually fantastic and we had an awesome tour guide. We added on a private cask draw experience, which included a tasting directly from a barrel. Then we finished up with a drink at their bar. 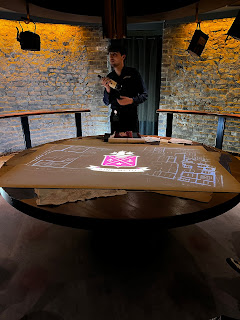 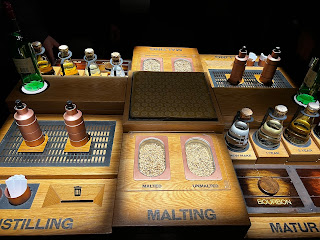 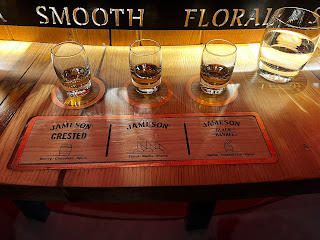 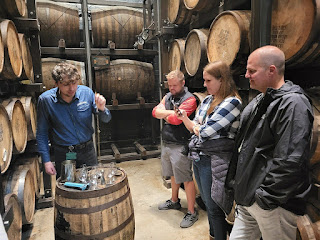 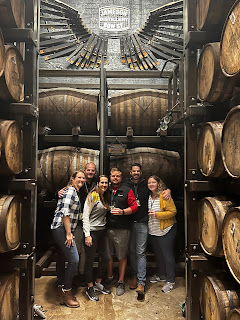 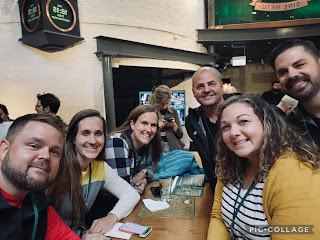 I'd recommend the tour even if you don't love Jameson, or alcohol in general. The facility is very cool and we all enjoyed the experience. Afterward we headed to Token for dinner. They have ample vegetarian and vegan options and cheap, old-school arcade games to play after you're done eating. Not wanting to call it a night just yet, we then walked over to The Brazen Head, Ireland's oldest pub. It had live music, so we felt like we were getting the authentic Irish pub experience! 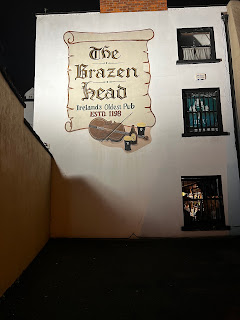 Day Two started with a visit to Trinity College, where we learned about and saw the Book of Kells (no pics allowed) and got to tour the Long Room. This is the main chamber of the Old Library, built in the 1700s, which is filled with 200,000 of the oldest books from Britain and Ireland. It's stunning! They are closing in October 2023 for a 3-year renovation, so we feel lucky we got to see it while we could. 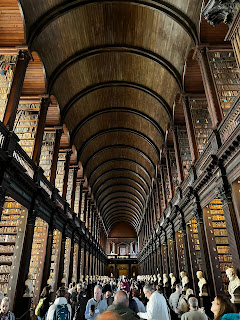 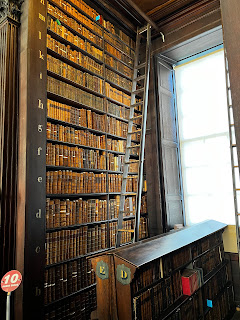 After the library, we hit up some tourist attractions around Dublin - Ha'Penny Bridge, Temple Bar District, and Dublin Castle. 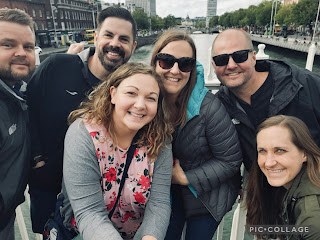 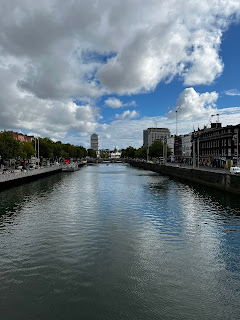 We ate lunch at The Bank on College Green, which is a very ornate former banking hall. After that it was time for our Guinness Tour. I'd never even tasted Guinness before that day, and will most likely never drink it again, but the experience was well worth it. We booked the Connoisseur tour, which meant 16 people got a private tasting at our own bar for 1.5 hours. Our guide was fantastic! The sample pours were really full glasses and they gave us 5 to try. They also taught us how to do the "perfect pour" of Guinness from the tap. The tour ended with a drink at the Gravity Bar, which has outstanding views of Dublin. We met a couple Welsh guys and ended up talking about American sports for quite a while! 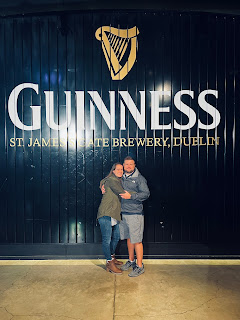 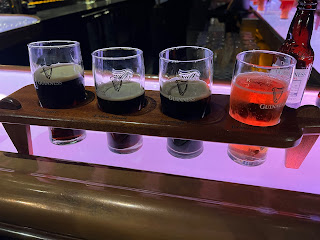 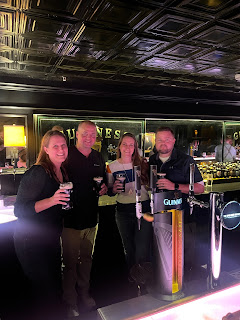 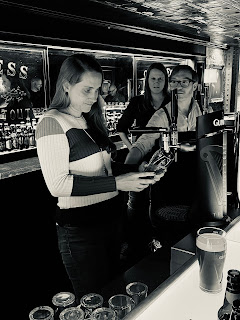 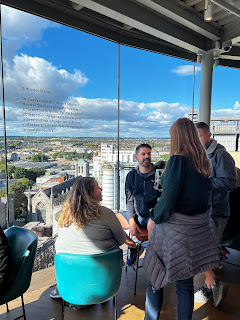 Dinner that night was at The Church, which as you may have guessed, is a 300 year old church converted into a restaurant. It still has an impressive organ and stained glass windows on display. 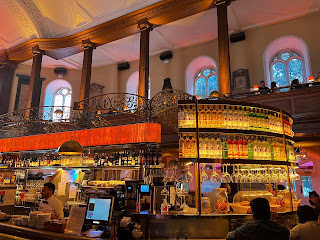 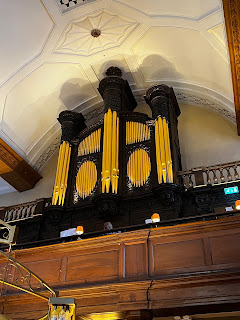 After dinner, we walked over to Grafton Street, but most of the shops were already closed. We did get to see the cute umbrellas on Anne's Lane though. 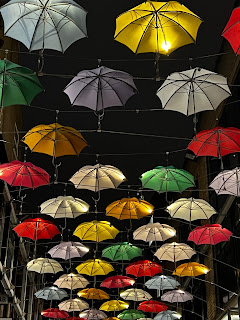 We thought our night was ending then, but little did we know another adventure was around the corner! When we got back to our car park at 8:30pm, we discovered the gate was locked up, with no way for us to get inside and retrieve our car. Oops. Apparently closing time was 8pm. There was a phone number posted, so we called for help and they told us it would likely be an hour before anyone could come. So, we sat on a street corner in Dublin for an hour, waiting for rescue. When the guy arrived, the first thing he said when he got out of the car was, "I hope I have the keys." !!!! He dug around in a bag in the trunk for an uncomfortably long time before finally finding the keys and unlocking the gate for us. We had to pay him 40 euro (on top of the parking fee), but then we were on our way!

Day Three took us to Northern Ireland for some outdoor adventures while Scott & Kyle had booked a guided tour elsewhere. We stopped for brunch at Dooleys (yummy Nutella pancakes) to break up the 2+ hour drive. We were literally just a few minutes away from our destination when we discovered the round-about exit we needed was closed and the only available detour added 20 minutes to our drive. That was a bummer! Also, the last road heading into Todd's Leap was tiny, yet supposedly was supposed to be able to handle two-way traffic. Talk about stressful.
At the adventure park, we booked off-road driving, blind-fold driving, and the giant swing. Meezy, my sister, and brother-in-law attempted the off-road driving, which meant driving a manual Land Rover on their treacherous course, but after having already driven us for the last 2.5 hours, I opted out! The cars had obviously been beaten up by previous drivers, and my sister left her mark too. Lol. 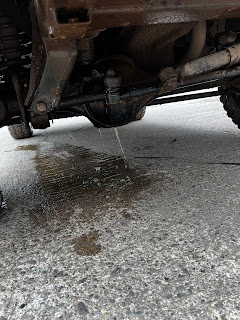 Next up was the big swing. We've done similar swings at amusement parks, but we figured we'd give this one a shot since it was in a new country. It didn't go as high as others we've seen, but the views were cool once you started swinging. Meezy was responsible for pulling the rip cord and he snapped the string during one of our rounds. That was a fun mini heart attack for a second. 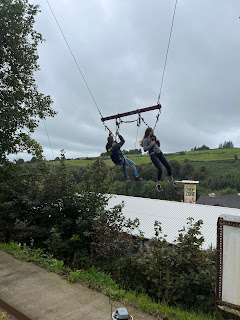 Last up was blind-fold driving. It was light-hearted and surprisingly less stressful, so I gave it a shot. Basically, your guide sits in the front seat beside you and handles the gas, and you're only responsible for steering. If you get too crazy, she has a kill switch to prevent you from crashing. The rest of the group is in the back and is supposed to help you navigate with directions of "left", "right", "straight", etc. Of course there is going to be some deception to make it more fun! 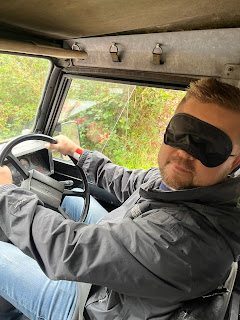 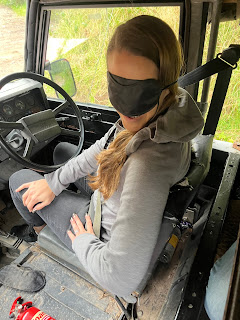 We headed back toward Dublin for dinner and met up with Scott & Kyle at a cool sports bar called McGowans. We were able to catch some American football since it was Sunday night. We didn't stay out too late though because the next morning we had a very early flight to Munich!
Posted by vanweezy at 5:25 PM