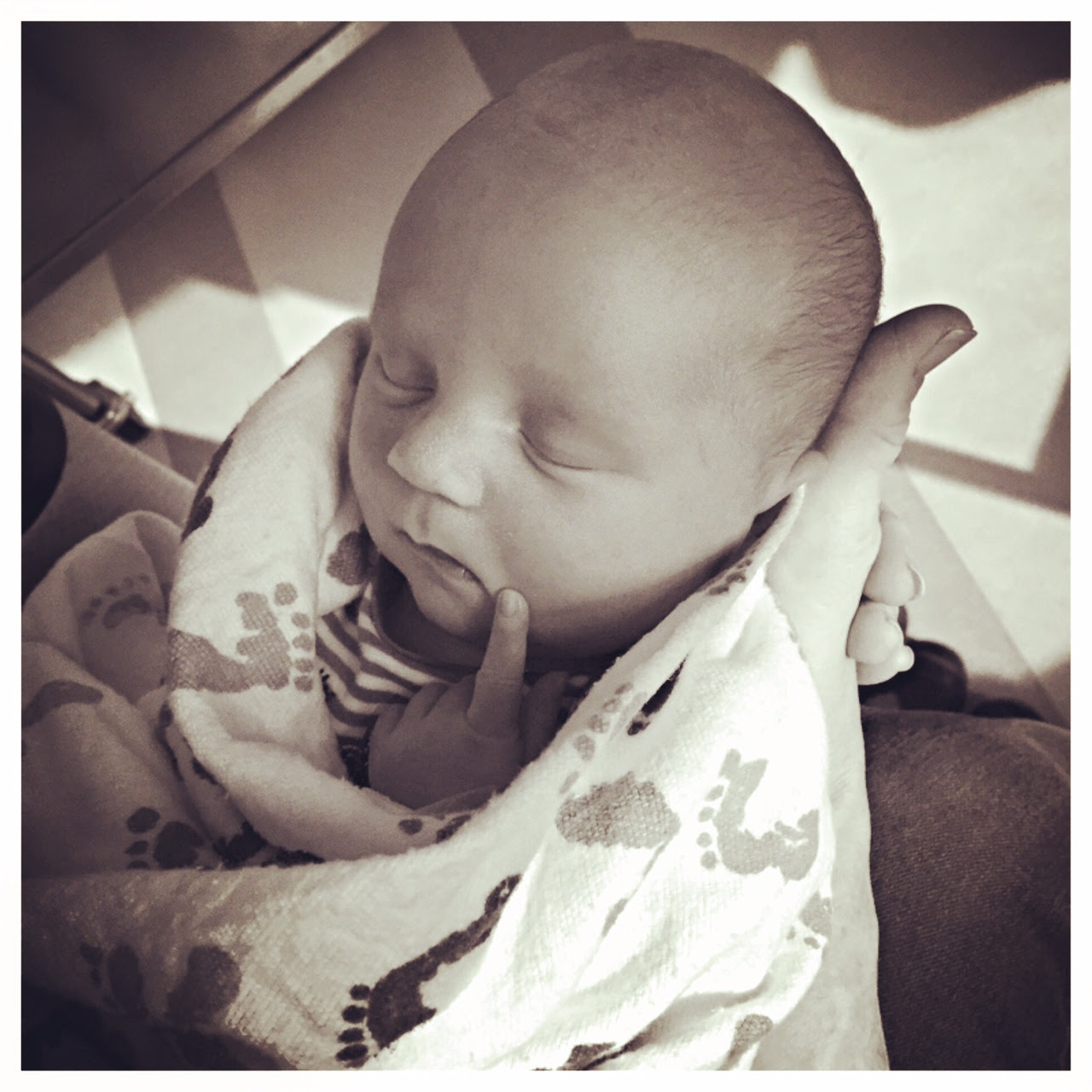 We're happy to announce the arrival of our second son, Jude, born on November 23rd.  I was scheduled for a C-section tomorrow (12/9) to have him, but he had other plans!  The circumstances of his birth and the week that followed were some of the most stressful days of my life, but we have a beautiful, healthy baby boy today, and that's all that matters!

I woke up around 4am on the morning of 11/23, feeling like I was leaking fluid.  I thought it might be incontinence, which I've heard can be a problem late in pregnancy, but wasn't sure.  I went to the bathroom and then went back to my bed.  A few minutes later, I felt the same sensation.  Hmmm, I wasn't sure what to think about that. I started googling and seeing what the internets thought.  Some people said they experienced the same thing, went to their doctor, and found out it was incontinence and felt dumb.  Other people said it was amniotic fluid leaking and birth was imminent. Eke!  How would I know?  I woke Meezy up and told him about my dilemma.  I told him not to worry, that it was probably nothing, but that I would let him know if I thought it was urgent.  I tried to go back to sleep, but kept experiencing the same thing.  Around 6:30am, I texted my sister and asked for her advice.  She told me to call the on-call doctor at my OBGYN's practice.  After I explained to the doctor what was happening, and that I was just short of 37 weeks pregnant, she told me to go to the hospital.  Honestly, I was shocked.  I just really wasn't expecting it to be anything related to actual labor since I had carried Dutch to the full 40 weeks before we scheduled his C-section.  I figured it would be a similar situation with Jude.

My sister came over to stay at our house while Dutch slept, so that Meezy and I could go to the hospital.  I grabbed my hospital bag (that I had finished packing just a couple days prior), but still didn't really expect to be admitted. I figured I'd get there, they'd run some tests, and then they'd send me home. Once I got checked in and assigned to a bed, a nurse came in and said she was going to test for amniotic fluid.  She said that if she took a swab and it turned blue, that meant it was amniotic fluid and immediate delivery would be necessary.  Even at that point, I was skeptical that labor had started. To my surprise, she held up the swab and proclaimed, "It's blue! You're having this baby today." That's when I went, "Oh, shit."

I was 36 weeks, 6 days pregnant. I thought I still had 2 weeks left before our scheduled delivery date. I told Meezy to call everybody in the family and let them know what was going on. Not being in control of the situation and having it be an emergency C-section made me very anxious. My doctor was out of town, so the delivery would be done by someone I had never met before. This is not what I had planned for and not how I wanted it to happen!

Things moved pretty quickly from there and I got the epidural. That was quite uncomfortable and I very nearly fainted.  I had to ask the nurse to support me, because I would've fallen forward otherwise. I guess my anxiety got the best of me. Before the anesthesiologist was done inserting the epidural, I had to be lain down on my side because I just couldn't sit up anymore. From there, we went into the operating room and the procedure started. I was uncomfortable the whole time. I felt like my throat was restricted and since I was numb from the chest down, I couldn't use my ab muscles to help clear my throat.  I kept asking Meezy how close the doctors were to getting Jude out, because I just wanted it to be over. After what felt like an eternity, he was out, and my discomfort ceased.  It was such a relief.  I could hear Jude crying and that was the best sound in the world. They told me he was 7 lbs, 13 oz, which is pretty hilarious considering he was premature!  While the doctors stitched me up, Meezy got to hold his newborn son and then bring him over to me. We snuggled faces and I let go of the anxiety for the time being. 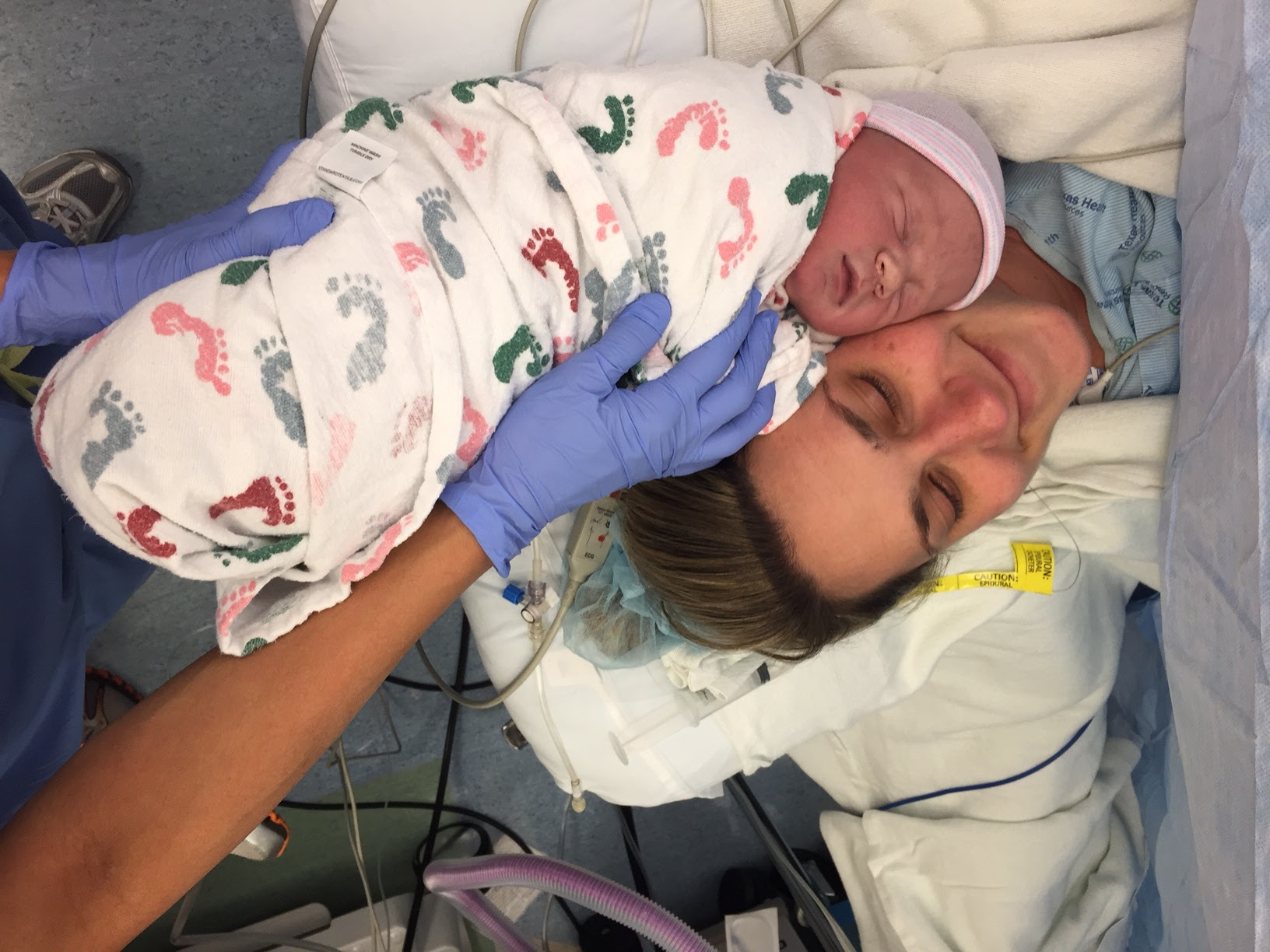 I wish I could say things were great from that point forward, but the next few days were quite a struggle for us. I had no idea the couple weeks of prematurity would translate to Jude needing to spend five days in NICU.  More to come.
Posted by vanweezy at 8:13 PM