We decided it was time to revamp our side yard. The playground had a lot of wear and tear and our kids had pretty much outgrown it. The area under the trampoline was never able to grow grass, so we were basically just trying to cover it up. The entire space was very large, but the playground took up most of it and prevented any other activities from happening. Here is a before pic: 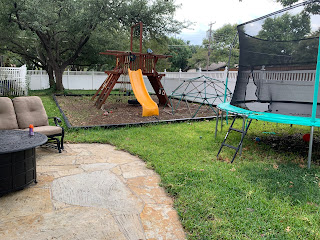 We initially thought we'd install a sport court, but I wouldn't be able to get exactly what I wanted because of the width limitations, and we'd probably have to cut down a tree. Since the cost was going to be super high, we decided it wasn't worth it to pay that much for something that wasn't ideal. The backup plan was to turf the whole area and install a putting green. We interviewed a few companies and chose Synthetic Grass Pros. We went to their office to test the turf options. They have a section beside their building with all the different types, so we took the kids, took off our shoes, and walked on all of them! We decided on "St Augustine Soft."
First the playground had to go, then the trampoline was relocated to our backyard, and then all the grass was dug up. They removed the first layer of dirt, leveled the yard, and then put down a layer of crushed rock. 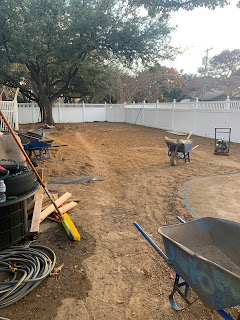 Then they started installing the turf and putting green. After install, they threw down a bunch of sand to weigh it down, to keep the turf blades standing up, and to hide any seams. It took about a week to complete.
The finished product is breathtaking! It's really beautiful, it feels good to walk or run on, and it's totally safe for Zoey. 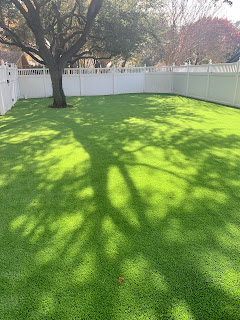 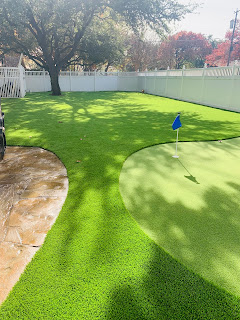 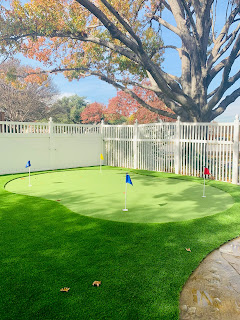 It's nice to have a large, flat expanse for playing sports and so that Zoey can run around. The putting green was a fun addition and provides some novelty when friends are over. It wasn't a cheap project, but we're happy with not needing to mow it and not worrying about grass not growing in some areas.
Posted by vanweezy at 10:13 PM